The dirty secret about robot vacuums is that they can’t actually clean your entire house. They’re great for floors, but are completely useless for cleaning all of your other other dust-covered surfaces. It’s a problem the Coral One—a robovac with a removable handheld cleaner—was engineered to solve. Its design is undoubtedly a clever solution to the problem, but the execution, unfortunately, isn’t the answer to our robovac woes.

WHAT IS IT?: A robovac with a removable handheld vacuum for cleaning areas the robot can’t

LIKE: A very clever solution to the limits of robot vacuums.

DISLIKE: The handheld doesn’t offer a lot of suction, and the robot bumps into almost everything.

As far as smarthome robots go, robotic vacuums are really the only automatons that offer any genuinely useful functionality. And while over the past 16 years robovacs have improved to the point where you never have to manually vacuum your floors ever again, there are lots of other places that need cleaning—like sofas, dressers, tables, or kitchen counters—where a robovac can’t help.

So when you’re budgeting $950 (£723) for iRobot’s latest and greatest Roomba, you’ll also need to factor in the additional cost of a second vacuum to tidy all your non-floor surfaces. That gets expensive fast, and it makes the $495 (£377) Coral One seem even more appealing given it’s an all-in-one dirt-sucking solution. But it’s a first-generation product from a company that was only just founded in March, and it unfortunately also functions like a first-generation product.

As industrial design goes, the Coral One, available in a glossy black or white finish, is one of the more beautiful robovac designs I’ve tested. It’s a fingerprint magnet, and easily scratched, but robovacs tend to look more like robots designed for factories, than an accessory designed to roam around your well-appointed home.

The underside of the Coral One features the standard robovac features, including chunky, spring-loaded wheels for climbing over obstacles. (Photo: Andrew Liszewski/Gizmodo)

The sweeping whiskers on this Coral One look a little worse for wear after the robot got stuck under a bed. (Photo: Andrew Liszewski/Gizmodo)

On the underside you’ll find the same basic features that most robovacs now rely on, with a pair of spring-loaded, deeply-treaded wheels that allow the robot to clamber over uneven surfaces (think wood floor to carpet transitions), a rotating brush drum to help dislodge dirt, and a spinning set of removable whiskers to help sweep dirt stuck in corners or along the edges of a room. Unfortunately, after getting trapped under a bed, the whiskers on the Coral One got chewed up as the robot tried to work its way free, but they still function as intended.

The Coral One (left) has roughly the same footprint as the Neato D4 (right). (Photo: Andrew Liszewski/Gizmodo)

However, the Coral One is at least an inch taller than the Neato D4, reducing its ability to squeeze under your furniture. (Photo: Andrew Liszewski/Gizmodo)

Under dressers and other furniture is a no-go zone for the Coral One. (Photo: Andrew Liszewski/Gizmodo)

The Coral One’s footprint is comparable to other robovacs on the market, including the Neato D4, seen sitting next to it above. But the Coral One is at least an inch taller than the D4, which means it will have a much harder time squeezing under your furniture. It’s a good example of why the removable hand vac is such a good idea, for tidying areas where the Coral One in robot mode can’t reach.

The Coral One’s handle glows in various colours to indicate its status and charge level, which is a lovely UI feature. (Photo: Andrew Liszewski/Gizmodo)

Functionality is basic but easy to learn, with just four buttons to memorise. (Photo: Andrew Liszewski/Gizmodo)

The Coral One’s onboard buttons are mirrored on a tiny included remote, so you don’t have to ever get up to start a cleaning routine. (Photo: Andrew Liszewski/Gizmodo)

But unlike most of its competitors, the Coral One doesn’t connect to your home’s wifi network or an app for operating it remotely. Instead, a small set of onboard buttons are used to start and stop a cleaning cycle, switch between standard and turbo cleaning modes, send it back to the dock for charging or change the language it speaks. Those buttons are mirrored on a tiny remote should you want to start the bot from afar, and the Coral One’s dock features a clock and programmable start time for daily cleanings, but that’s about as complicated as the robovac gets.

A pop-up handle makes it easy to remove and empty the Coral One’s dust bin, but the shiny black plastic housing makes it hard to know when it’s full. (Photo: Andrew Liszewski/Gizmodo)

On one hand, it makes the Coral One very easy to set up and use, and there are no concerns about privacy given it doesn’t upload any data about your home or its cleaning routine. But on the other hand, it means the vacuum lacks much of the advanced functionality that makes other robovacs so useful now. You can’t set up virtual boundaries on a map like Neato’s robo-cleaners can, nor can you get software updates that improve the robot’s functionality over time. 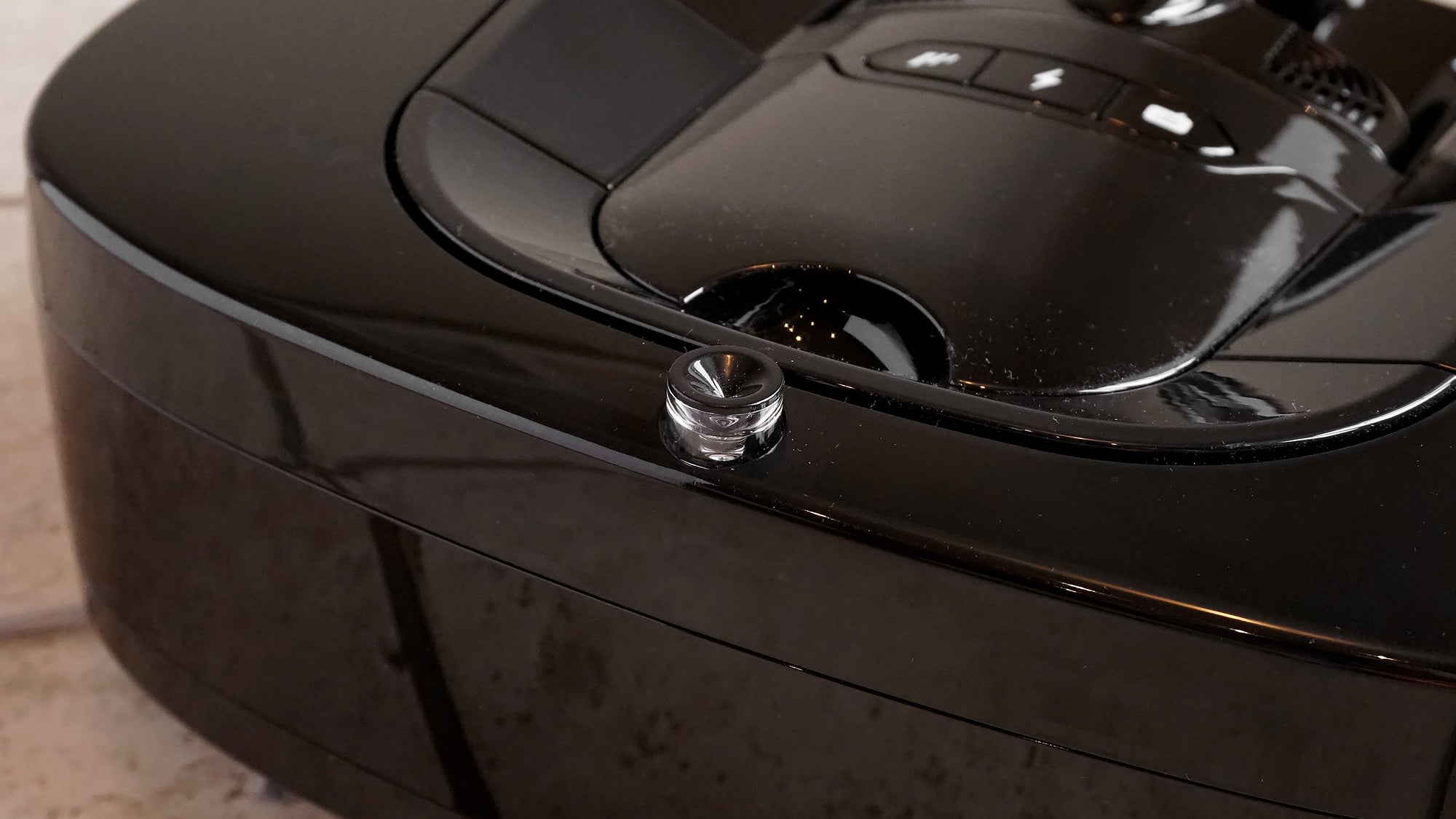 A tiny infrared sensor helps the Coral One to spot obstacles and navigate a room. (Photo: Andrew Liszewski/Gizmodo)

And that is one of my biggest concerns with the Coral One, because while it does rely on a collection of sensors to map out a room, plan a cleaning routine, and avoid obstacles—out of the gate it’s not really great at any of those things, and over time that’s not going to change.

I have tested countless robovacs over the years, and not even the earliest Roombas careened around a room as the Coral One does. Instead of slowly tip-toeing around furniture and obstacles like other robovacs do (Neato’s D7 is very good at this) the Coral One tends to just bump into objects, with enough force to even move chairs around a room, before backing away and heading off in another direction. At one point it almost toppled a standing vase the robovac’s camera couldn’t have missed, and as a result, I’m actually hesitant to let it clean a room without supervision. 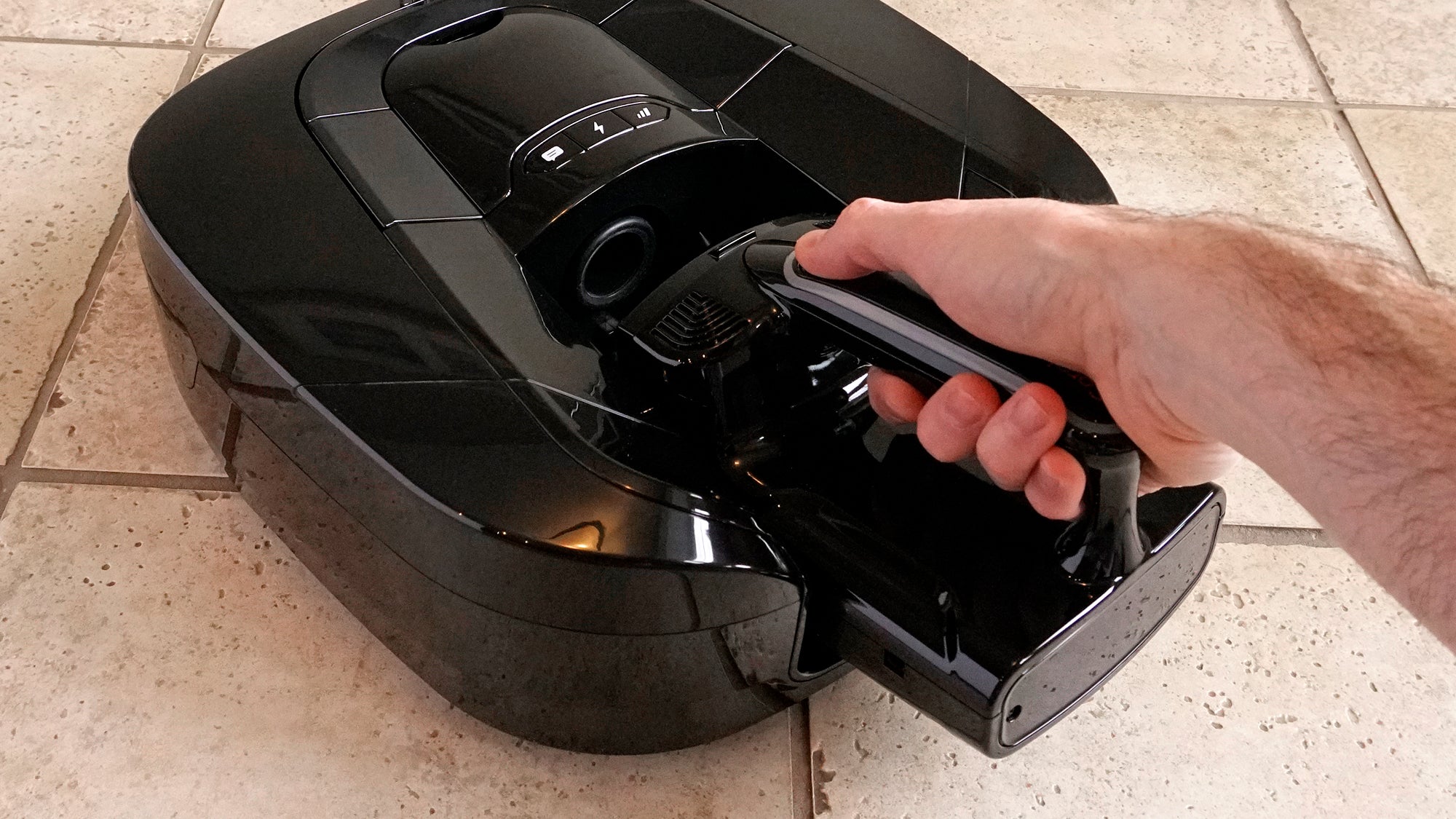 The removable hand vac sets the Coral One apart from its competitors. (Photo: Andrew Liszewski/Gizmodo)

So what about the Coral One’s other flagship feature: the removable hand vac? It’s a very clever design and removing it from the robot is as easy as pushing a release button and yanking the portable cleaner away, which includes the Coral One’s motor and battery.

I wish I could say this is where the Coral One shines, but I can’t. It takes the handvac about five seconds to get up to full suction power when you turn it on (and even longer to completely spin down afterwards) and even then it’s not that powerful. And that’s not comparing it to a £500 top-of-the-line handheld Dyson, either. I remember the handheld hoover I used to clean my room back in university having far more suction than this does.

Transforming the Coral One’s guts into a handvac is as easy as snapping on a couple of included accessories. (Photo: Andrew Liszewski/Gizmodo)

More often than not you’ll be using the handvac to clean under furniture where the robot can’t reach, so the inclusion of a built-in torch is a welcome feature. (Photo: Andrew Liszewski/Gizmodo)

But it’s the basic attachments and minimal suction power that make the Coral One’s handvac a disappointment. (Photo: Andrew Liszewski/Gizmodo)

The Coral One’s handvac also ships with just two accessories: a crevice tool and a brush attachment for fabrics. What’s sorely missing is a long extension tube and a head for cleaning parts of your floor the robovac can’t reach. Like it or not, robot vacuums aren’t perfect, and there’s always going to be spots they miss. But being able to quickly switch the machine to a manual floor vac would be the perfect workaround, and it’s something I hope the creators of the Coral One consider for future versions of the product.

When it was first announced last month, the Coral One seemed like it would be a great alternative to the countless robovacs on the market. I still think the inclusion of a removable handheld vacuum is a clever innovation: I just wish it had been better executed. 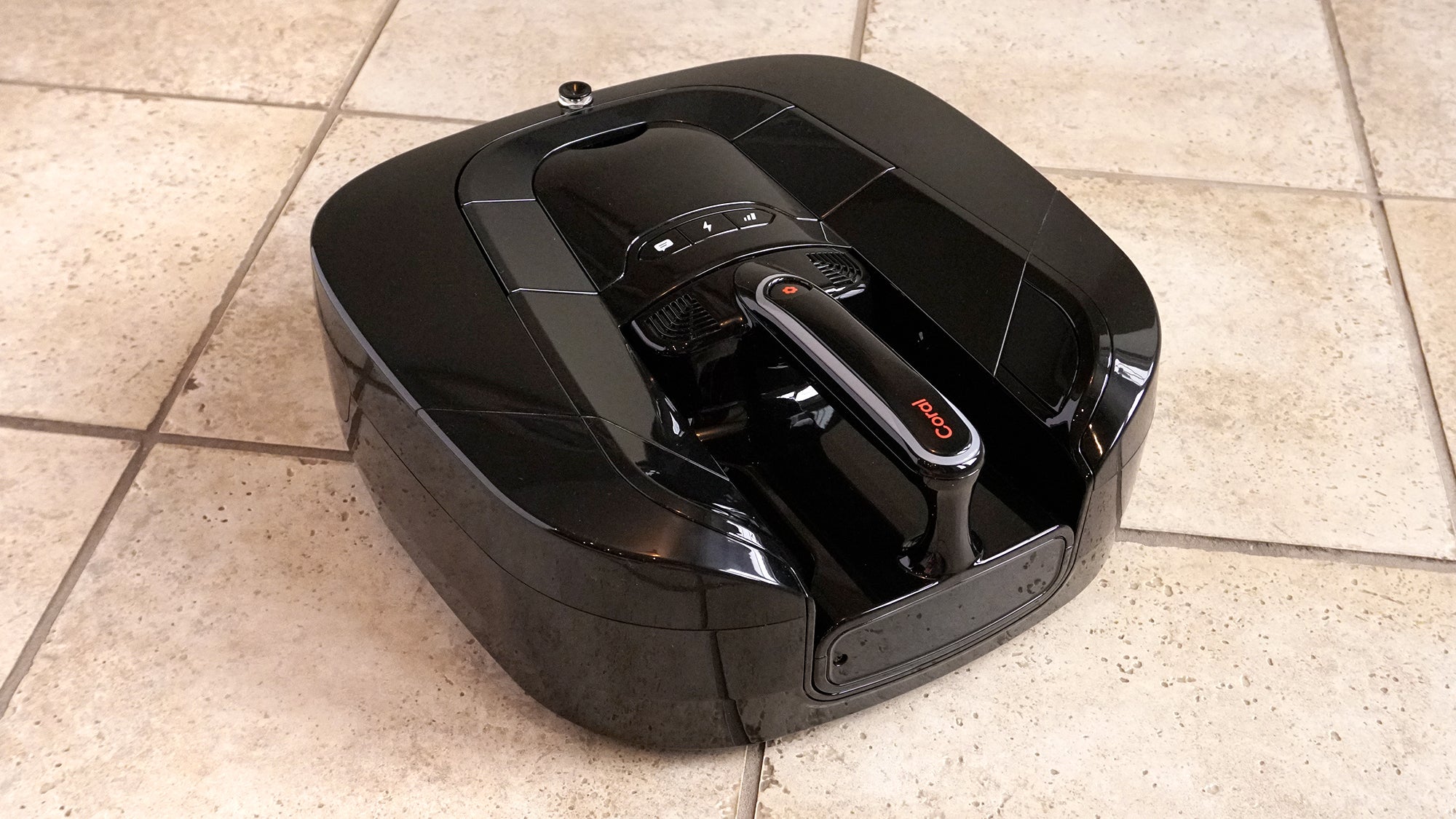 A brilliant design, but a less-than-brilliant execution. (Photo: Andrew Liszewski/Gizmodo)

As a first-generation product, the Coral One leaves a lot to be improved, and without the benefit of wifi connectivity, those improvements are only going to be available on future generations of the robovac. Its unique design has a lot of potential, and I won’t be surprised to see others copying what the Coral One can do. I just hope that someone is able to eventually deliver what this one doesn’t.