Can This Little Magic App Make Your Headphones Sound Perfect?

A new app from a Latvian outfit called Sonarworks claims it can tune music to play perfectly through specific headphone models. So whether you’re using AirPods or a swanky pair of £900 Auduze LCD-2s, you’ll hear the same exact mix. Could the future of making music sound good be an app that compensates for the terrible headphones most of us insist on buying?

For the last few weeks, I’ve been trying a beta version of Sonarworks’ True-Fi software on both Android and iOS. The apps are a mobile version of the headphone calibration software that’s existed for the desktop since earlier this year. After spending much of the year in closed beta, Sonarworks is now opening the mobile apps to an “early access” public beta, with the goal of a full release next year. A lifetime license for the desktop and mobile apps currently costs €79 (£71), but for the next few months during the early access period, the app will be totally free, so you can get a taste of how the tech works before you buy it. The company also has plans to release a subscription model as well.

The technology is a bit like an automated equaliser. Doubtless, you’ve seen apps or headphones that have some kind of equalisation built in, but what Soundworks is trying to do here is far more ambitious than any other product I’ve seen like it, especially for smartphones. Is it really possible for a piece of software to optimise your listening so simply? It sounds seductive, but I’m always wary of throwing processing at music, when it seems to me that a good set of headphones should be enough to get good sound. That said, more technology like this is certainly on the way, and there’s every indication it could be the future.

When you open up the app, you’re prompted to select your headphone model from a list, and the software automatically adjusts the audio. True-Fi supports 287 models, ranging from cheap consumer garbage to very expensive audiophile cans. Sonarworks says that its goal is to reproduce what the original artists recorded or intended. The secret sauce is closely guarded, but from what I understand, the company has taken detailed measurements of each of the headphones it supports, and uses its technology to even out the idiosyncrasies of each headphone’s frequency response such that the output is “flat.” In other words, all the audio levels are reproduced exactly as they were recorded. The app also has a few other adjustment parameters. It prompts you for your age and sex so that it can compensate the treble based on global research for natural hearing loss. You can then adjust this slightly depending on your ears and preferences. There’s an optional “bass boost” slider that lets you customise low-end frequencies to your taste. 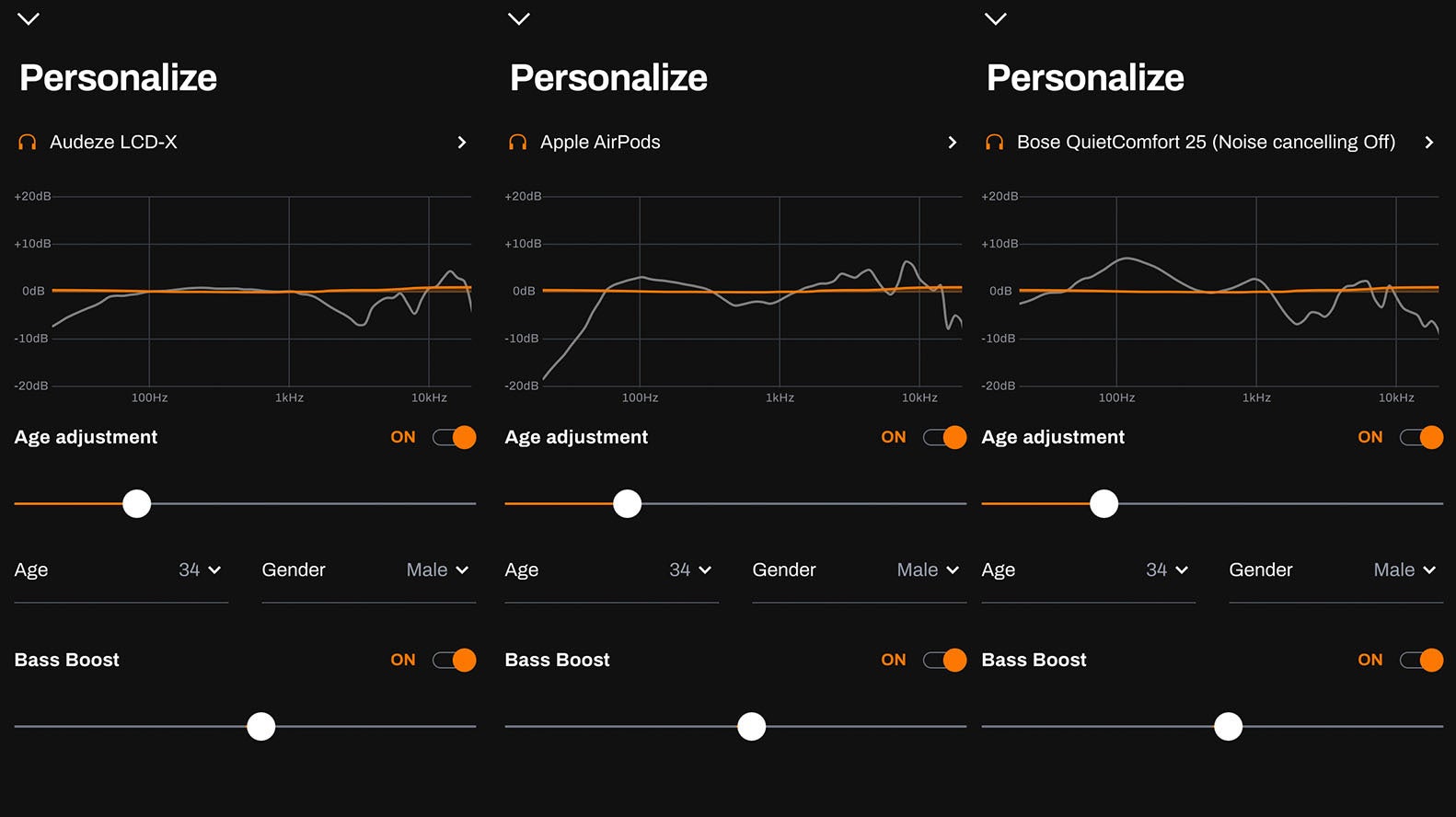 Every headphone has its own carefully measured frequency response that Sonarworks tries to flatten. (Screenshot: Sonarworks)

I should note right off the bat: The app is very much a beta, and there are lots of little bugs. Sonarworks told me that building iOS and Android players concurrently was considerably more challenging than the company anticipated—building a global sound plugin for the desktop is much easier. I won’t list all my gripes but be warned that some things, like the Spotify integration, are a little shaky, and the app is missing features you would expect from a phone music player, like lock screen controls. More annoyingly, when you adjust your personalisation settings during playback, there’s a little flutter of audible glitches before the new settings take effect. Sonarworks says it’s roadmapped fixes for everything, and given how well the desktop app works, I’m confident they’ll iron many of the issues out in time. (If you experience bugs, the company encourages you to report them to help make the final product better.)

This headphone software is, by the way, an evolution of recording studio software Sonarworks has offered since 2012. The studio software allows engineers to calibrate the sound of the speakers in their mixing rooms so that it matches a reference standard. From a professional point of view this makes a lot of sense: If you mix something in a studio in New York and then want to send it to a studio in Los Angeles for feedback, people on both ends need to sure they’re listening to exactly the same thing, much as designers sitting at two different computers need to be sure that the colour calibration of their monitors is the same. Earlier this year, the company released an adjacent headphone product for desktops. This makes sense from a professional perspective as well: Producers don’t only mix and listen to music in studios; they need to be able to listen to calibrated recordings in their homes, in hotel rooms, and so on.

It’s easy to see how the headphone technology might also be exciting to a certain brand of tech-minded consumer or audio enthusiast, and given how much music people listen to on their phones in 2018, the introduction of a new mobile app could be a game changer for loads of music fans.

When I heard about True-Fi about a year ago, the first thing that popped into my mind was that perhaps it could be a solution for the AirPods that I was waffling over buying. For better or worse, I’ve come around to the convenience of Apple’s tiny wireless buds—or at least, I understand why so many people have bought into them. They’re never the headphones an insufferable snob like me would choose for their audio quality, but in practice, they are so easy to use that they’ve become the archetype of simple wireless headphone pairing. You flip open the top of the buds’ little carrying case, and they connect to your phone without a fuss.

Over the last few weeks, I’ve tested the software with AirPods, and a smattering of other cans supported by the software, including the V-Moda Crossfade M100, Bose QuietComfort 35, Sony MDR-1000X, and the Sony MDR-1A. It’s a combination of high-quality consumer-grade headphones (not audiophiles stuff) that mostly sound good but have their sonic quirks.

The app has a little enable/disable toggle that allows you to turn the software on and off while you’re listening to the music, and the difference is incredibly striking across headphone models. I know most of these headphones and the music I tested them with very well, and at first, the feeling can be disorienting and otherworldly. Broadly speaking the software makes the sound of a song you’re listening to sound much fuller as it pushes underrepresented frequencies to the forefront.

The process of comparing lots of headphones to see if they all sound the same is complex and necessarily a little flawed—no matter how seamlessly I was able to transition from one pair to another there was a significant delay. I’m fairly confident that all of the headphones sound similarly flat, but as the Soundworks folks point out, there are limitations of physics and hardware quality. The AirPods are not magically going to sound like audiophile headphones just because you’ve balanced out the sound.

I can’t say for sure if I like it or not across the board. I was quite happy with how a lot of headphones I have sound before trying True-Fi, and it hasn’t proven to be the magic bullet for sound quality that I’d hoped. (As I said, you can take it for a spin before you buy to see if you like it.) 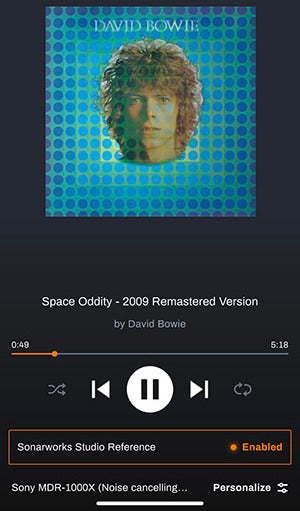 Take for example my favourite audio testing song, David Bowie’s “Space Oddity.” The song is famous for its recording in which a different Bowie harmony is panned to each ear. The song’s lovely bass line, jangly guitar, and an orchestra are all magically mixed into one of the greatest compositions of all time that on a good set of headphones doesn’t need any help from software. Enabling True-Fi in its default settings for my age pushes the orchestra accompaniment forward, and overall adds brightness and presence to the sound. It feels bigger, and there’s a sensation that you hear more of what’s on the recording. Lost are some of the warmth of the lower strings and the ambling bass line. It’s a bit maddening, I guess. I can’t say for sure which of the versions sounds better. One is the sound I’ve known forever; the other is this digitally optimised version that sounds different. (Tinkering with the age and bass settings slightly offset these changes, obviously.)

If you really want to get into it, there’s a fascinating philosophical discussion that played out in the comments on this blog post (and probably elsewhere) relating to the sonic signature of different headphones and whether you should just let headphones, especially sophisticated ones, sound the way they were designed. Engineers spend years tuning products so that they sound the very best that they can. There’s a whole art to it, so the notion that you’re just going to make everything sound the same with some fancy processing in a way flies in the face of what headphone nerds have been stressing over for decades. (For what its worth, the company’s VP of product, Jānis Spoģis, told me that the company doesn’t think there’s only one way to listen to music and that if you like the way your headphones sound without the software, that’s your taste.)

These days there’s digital fingerprints over all the music we listen to—all manner of transcription and translation as encoded music passes from cloud servers to computers to wireless headphones. I suspect that technology like True-Fi is only the very beginning of the processing technologies that will be deployed to optimise our listening. From that point of view, True-Fi is a fascinating peek at what’s to come, and certainly worth taking for a spin on a trial.