Ichthyosaurs and dolphins are the archetypal examples of convergent evolution in action, in which two completely unrelated species acquire near identical characteristics. The discovery of a new ichthyosaur fossil suggests this Jurassic-era creature was even more dolphin-like than we appreciated, featuring warm-blood, blubber, and even similar camouflage.

A remarkable 180-million-year-old fossil found in the Posidonia Shale Formation of southwestern Germany, of the species Stenopterygius ichthyosaur, is providing the best evidence yet that ichthyosaurs—ancient, dolphin-like marine reptiles—were warm-blooded creatures.

The preservation of the new fossil is so good, said lead researcher Johan Lindgren from Lund University in Sweden, that he was able to see outlines of the animal’s original, flexible skin, along with evidence of blubber underneath. What’s more, he and his colleagues were able to detect internal organs and, at the molecular scale, traces of cellular layers within the fossilised skin. It’s now the first example of fossilised ichthyosaur blubber in the scientific literature, pointing to ichthyosaurs as warm-blooded, or endothermic, organisms. 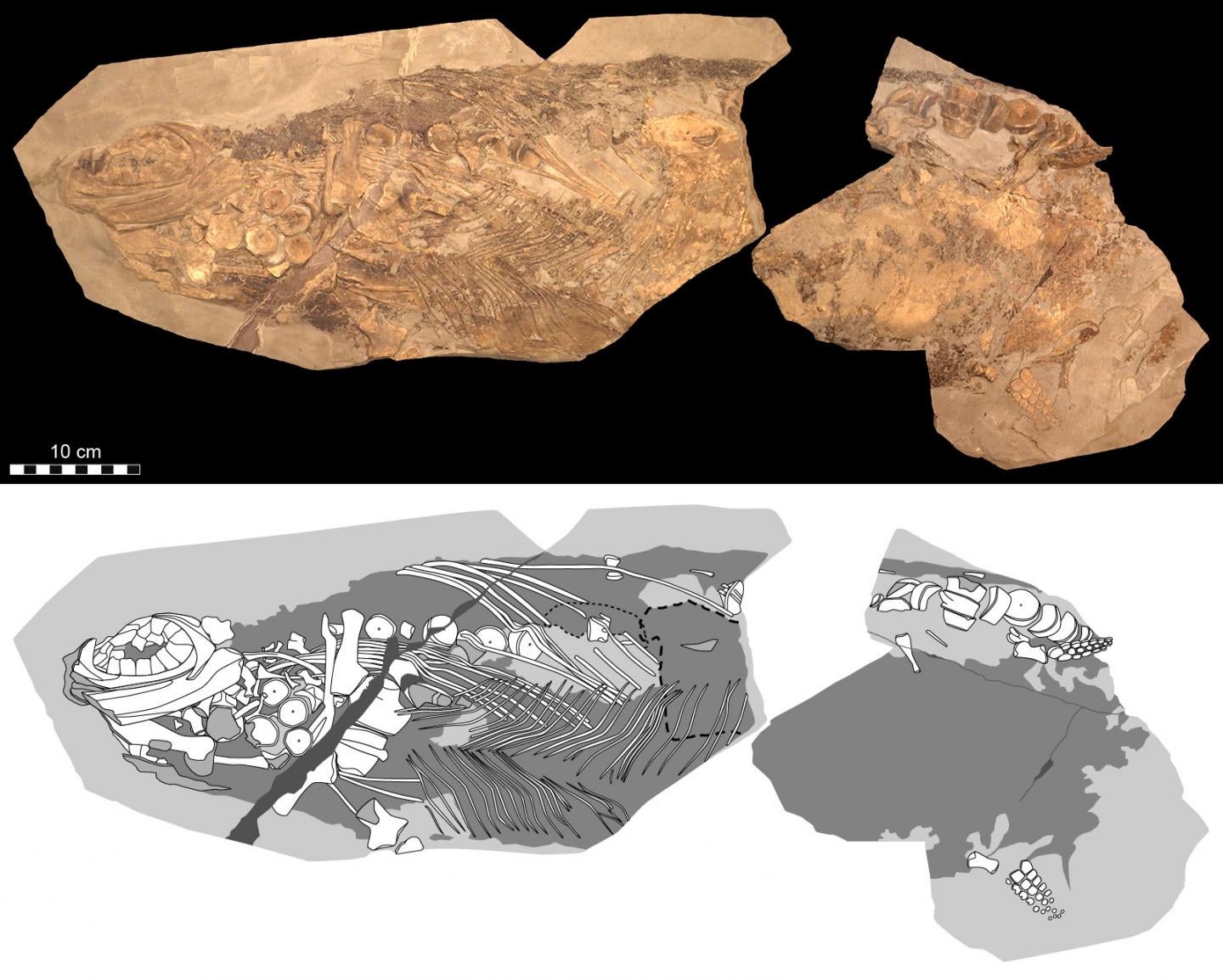 A photo and diagram of the fossil. (Image: Johan Lindgren)

Ichthyosaurs were contemporaneous to dinosaurs, but they were strikingly similar in appearance to modern toothed whales, most especially dolphins. Scientists suspected ichthyosaurs might be warm-blooded, based on estimates of their swimming speed, but this new discovery, the details of which were published yesterday in Nature, is the first to provide evidence in the form of fossilised subdermal soft-tissue.

In modern aquatic mammals, blubber, in addition to acting as an insulating layer against the cold, aids in buoyancy and serves as a fat store. Cold-blooded creatures, which tend to live in warm climates, don’t really need it.

“Its primary function is insulation,” Lindgren explained to Gizmodo, “Hence, there is no need for a cold-blooded animal to have blubber. With that being said, adult individuals of the modern leatherback sea turtle have blubber, but they have elevated metabolic rates compared to ‘typical’ reptiles, and blubber is one of many adaptations in this species to enable ventures into cool and cold water [areas].”

But unlike sea turtles, who lay eggs on the beach, ichthyosaurs gave birth to live young, which is associated with warm-bloodedness, according to Lindgren.

To study the fossil, Lindgren and his colleagues applied a multidisciplinary experimental approach to analyse both the structure and chemistry of the preserved soft parts. The researchers were able to identify cell-like microstructures, which held pigments within the animal’s skin, and traces of internal organs, including the liver.

Comparisons of a modern porpoise sample of blubber (left and centre) and the fossilised ichthyosaur blubber (right). (Image: Johan Lindgren and Martin Jarenmark)

“We also showed that the inside of its skin was lined with blubber, to suggest that ichthyosaurs were warm-blooded,” said Lindgren. “The fossil is so well-preserved that we are able to distinguish cells, cellular organelles, and traces of the original biochemistry.”

To which he added: “Our analyses revealed that this ichthyosaur was countershaded; that is, it had a dark upper surface and light belly.”

Countershading is also present in dolphins, serving as camouflage. In the case of ichthyosaurs, their countershading camouflage may have protected them from predators, like aerial pterosaurs from above, or aquatic pliosaurs from below, the researchers speculate.

Lindgren said his team “conducted the most comprehensive and in-depth investigation ever undertaken on a soft-tissue fossil,” but admitted it was based on the analysis of a single individual. Future research “needs to be expanded to also include other specimens,” he said.

The good news is that this might be possible. Ichthyosaur fossils are exceptionally common, so palaeontologists could uncover more fossils as pristine as this one. [Nature]