In the very first selfie taken by InSight, the NASA probe looks ready and rarin’ to go.

This wonderful mosaic, which consists of 11 individual photos, shows the entire probe as it’s sitting pretty on the Martian surface. The photos were captured by the Instrument Deployment Camera on InSight’s robotic arm. The lander’s two solar panels can be seen, along with various science instruments on its deck, such as the weather sensor boom and UHF antenna. InSight landed on Mars on 26 November, and the NASA project has been going absolutely swimmingly during these early stages.

A second mosaic, this one comprised of 52 individual images, shows InSight’s immediate workspace, that is, the area upon which the probe will eventually plant its science instruments. The area shown in the mosaic measures around 14 feet by 7 feet. The lavender-coloured areas show the best spots for the lander to place its seismometer: the Seismic Experiment for Interior Structure (SEIS). 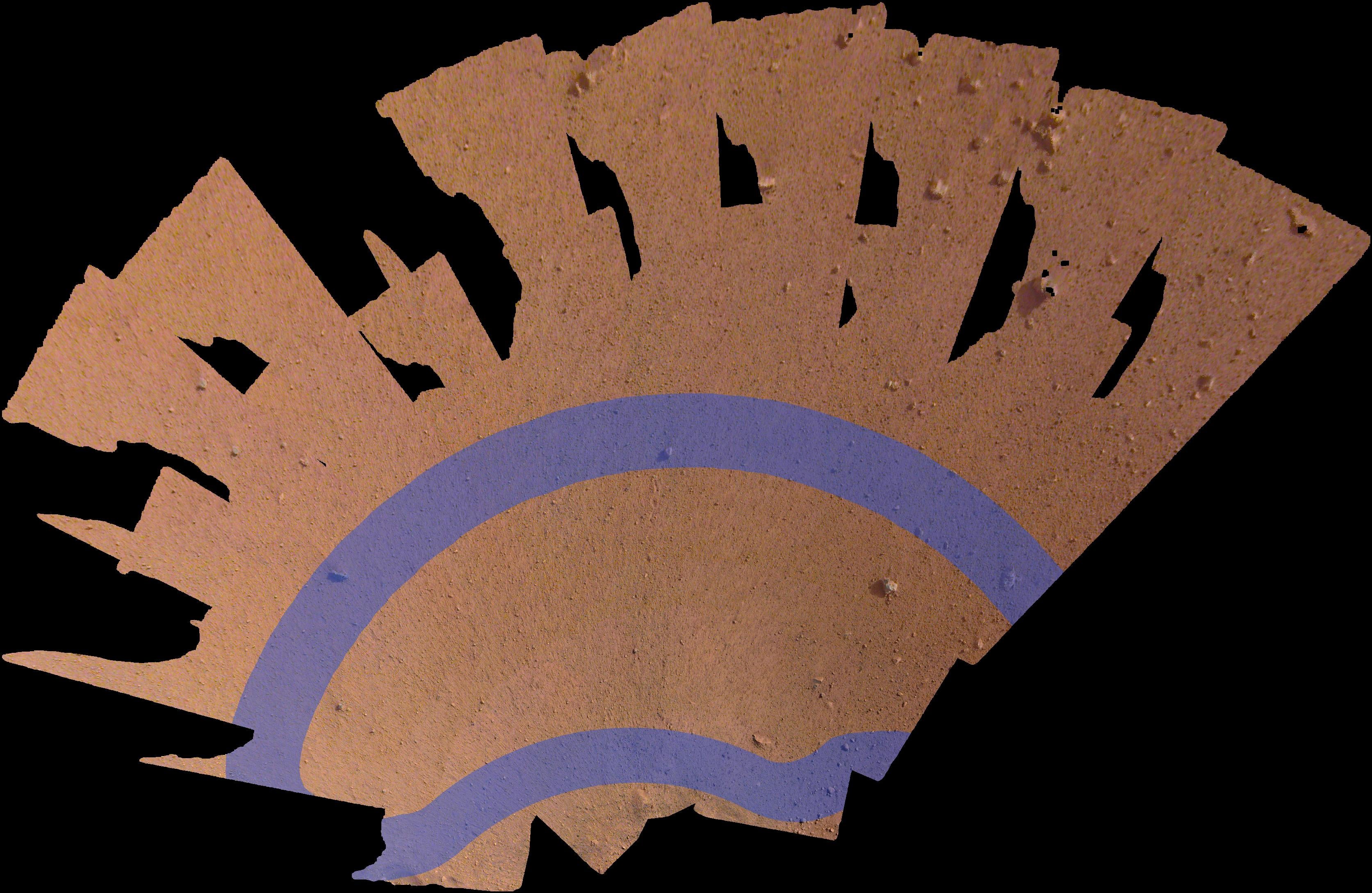 A mosaic of InSight’s workspace. The lavender colour represents ideal areas for the placement of the probe’s seismometer. (Image: NASA/JPL-Caltech)

This is, quite fortuitously, the area within which the stationary probe will do its work. NASA selected this particular location on Mars, Elysium Planitia, because it’s relatively free of rocks. But to make matters even better, the probe happened to land in a rock-free hollow—a hole created by an ancient meteor impact that slowly filled with sand—that appears to be exceptionally free of rocks, save for a few small stones scattered about.

“The near-absence of rocks, hills and holes means it’ll be extremely safe for our instruments,” said InSight’s principal investigator Bruce Banerdt in a statement. “This might seem like a pretty plain piece of ground if it weren’t on Mars, but we’re glad to see that.”

Mission planners will now have to decide where within this area the probe should place its ground-sensing instruments. Once a spot has been located, they’ll transmit commands to the probe, instructing InSight’s robotic arm to carefully set SEIS and its heat flow probe, called the Heat Flow and Physical Properties Package, at the pre-selected locations. The flatter the surface, the better, as these instruments will work best on level terrain. It will also be good for InSight to avoid rocks larger than about a half-inch across (1.3 centimetres). Once drilling starts, the heat-flow probe could dig as deep as 16 feet (nearly 5 metres) below the Martian surface.

With so many potential points of failure, it’s a relief to see this project get off to such a smooth start. We’re knocking on wood that things continue to go well for NASA and its intrepid new probe. [NASA]