Using its robotic arm, the InSight lander gingerly placed a hexagonal device onto the smooth Martian surface on Wednesday. It marks the first time in history that a seismometer has ever been placed on Mars—or the surface of another planet for that matter.

InSight landed on Mars on 26 November, and it’s now getting down to the serious business. After checking out its new workspace and taking a cool selfie, InSight will now set up the Seismic Experiment for Interior Structure, or SEIS—an instrument deemed critically important to the mission.

“Seismometer deployment is as important as landing InSight on Mars,” Bruce Banerdt, the principal investigator of the InSight mission, said in a statement. “The seismometer is the highest-priority instrument on InSight: We need it in order to complete about three-quarters of our science objectives.”

Who knew that practicing the claw game would come in handy for exploring #Mars? I’ve got a grip on my seismometer and am preparing to set it down. https://t.co/tjr8tfaCg5 pic.twitter.com/IsOAlXfiUt

In preparation for the SEIS deployment, mission planners made sure the probe’s robotic arm was functioning properly, and that a suitable spot on the surface was chosen. And because practice makes perfect, team members went through the deployment procedure using a replica in a test bed at NASA’s Jet Propulsion Laboratory in Pasadena, California. 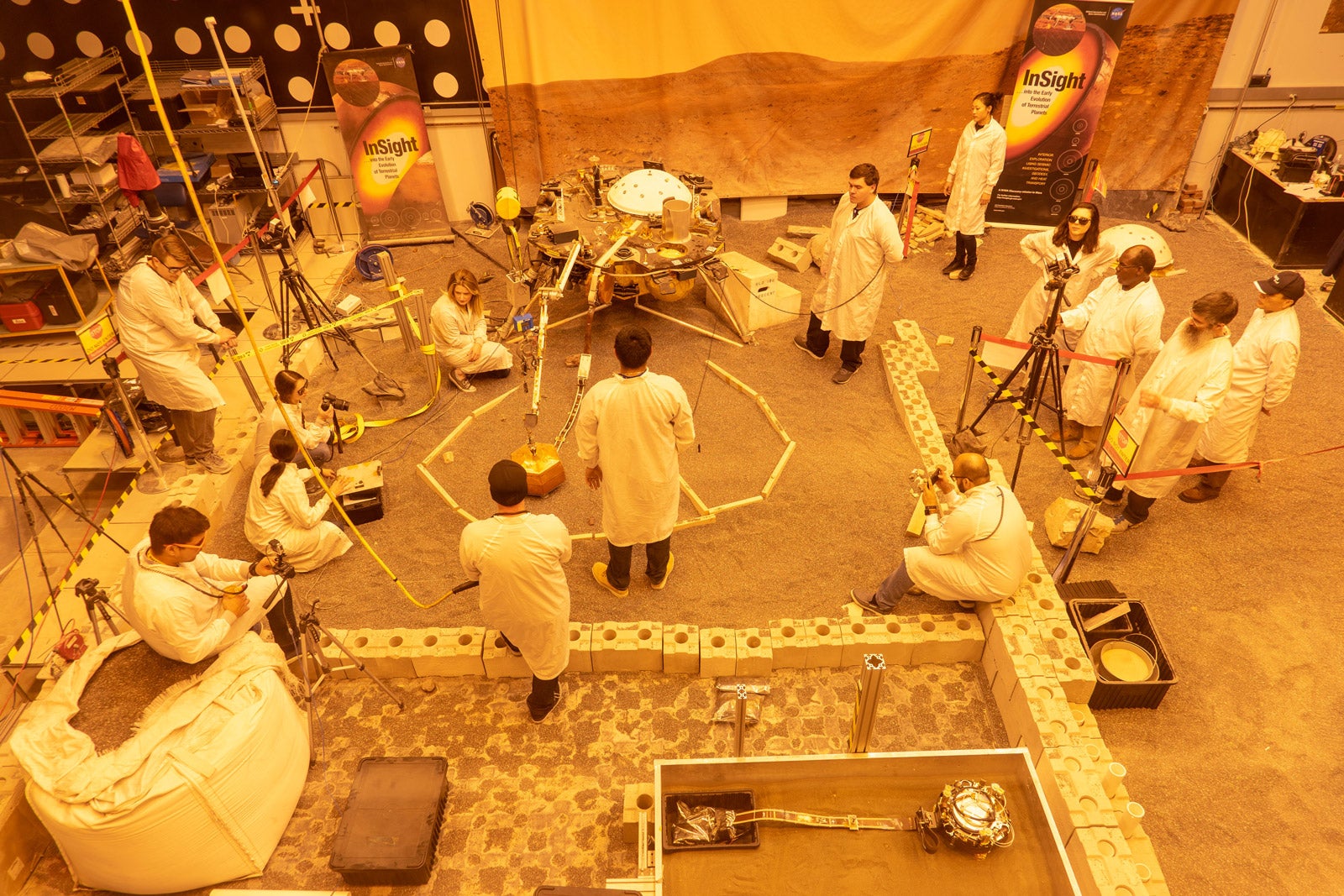 When the time finally came for the real deal, InSight gently placed the seismometer on the surface directly in front of it, as far away as possible—about 5.4 feet or 1.6 metres away. This particular spot was chosen to keep the device as far as possible from InSight’s feet; it allows the device’s cable to rest on the ground and provides even contact with the surface. It also leaves space for the heat probe to be placed later.

The copper-coloured device is now sitting pretty on the Martian surface, but the deployment is still incomplete. SEIS needs to be levelled, as it’s currently tilted on the ground at a very slight angle of 2 to 3 degrees. Over the next several weeks, NASA scientists will carefully analyse data extracted by the device to test the reliability and integrity of the information being sent back to Earth. The InSight team might have to adjust SEIS’ wire-lined tether to minimise any noise travelling along it, for example. For the final stage of the setup process, InSight’s robotic arm will place the Wind and Thermal Shield over the seismometer to stabilise the environment around its sensors.

Whew – winding down after a long day, but I’ve done it: I’ve placed my seismometer on the surface of Mars! With SEIS, I’ll be able to listen in for marsquakes and help reveal the heartbeat of #Mars. https://t.co/GYNO4txPPi pic.twitter.com/18eQHXOfiO

“InSight’s timetable of activities on Mars has gone better than we hoped,” said InSight project manager Tom Hoffman. “Getting the seismometer safely on the ground is an awesome Christmas present.”

Once SEIS is up and running, it will listen for marsquakes—the so-called “heartbeat” of the Red Planet. The device should be able to detect seismic waves passing through the layers down below. Planetary scientists have previously shown that plate tectonics exists on Mars, though not nearly on the scale as what we see here on Earth; major tectonic shifts occur about once every million years on Mars. That said, SEIS should be able to detect tiny seismic ripples. Scientist will use this data to learn about the depth and composition of these layers.

As noted, InSight will have to deploy another device: the heat probe. Also known as the Heat Flow and Physical Properties Probe, the device will be placed on the east side of the lander’s workspace, about the same distance away as SEIS. This should happen in late January. [NASA]