Permafrost Melt Could Destroy a Third of All Arctic Infrastructure, Affecting as Many as 4 Million People

All the glue that has held the Arctic together for millennia is being dissolved by climate change, right down to the ground beneath millions of people’s feet.

Rising temperatures are melting frozen soil at an alarming clip with the changes visible before our very eyes today. But the future promises an even more dramatic shift according to a new study published Tuesday in Nature Communications. As the frozen ground turns to muck, it could result in millions of people left without homes or the infrastructure that makes living in one of the harshest environments on Earth possible. What’s more disconcerting is that even if the world slashes carbon emissions dramatically, these changes are basically locked.

The new findings offer what the authors call “an unprecedentedly high spatial resolution” look at how the melt of frozen soil, known as permafrost, will impact infrastructure. As permafrost melts, it essentially turns previously firm ground into a slurry of soil and water. Communities in the Arctic are already coping with the impacts the 1 degree Celsius of warming since the industrial revolution has wrought. Infrastructure is collapsing or at risk of it as are traditional ways of life.

To see what the future holds for the permafrost region, the authors overlaid data of where permafrost deposits exist in the Arctic with infrastructure and settlements. They then looked a variety of climate scenarios to see how much the surface layer of permafrost is likely to melt by mid-century, all at a resolution on 1 kilometre.

The findings show that a whopping 70 per cent of infrastructure in the permafrost region—the equivalent of one-third of all Arctic infrastructure—sits on land that has a high potential for permafrost thaw by mid-century. That includes railroads, homes, and ironically oil and gas infrastructure that’s responsible for shipping carbon-emitting fossil fuels to market. Nearly 4 million people call the high-risk regions home. If the infrastructure isn’t adapted to the melting landscape, it could force these people to migrate to areas with more solid ground. 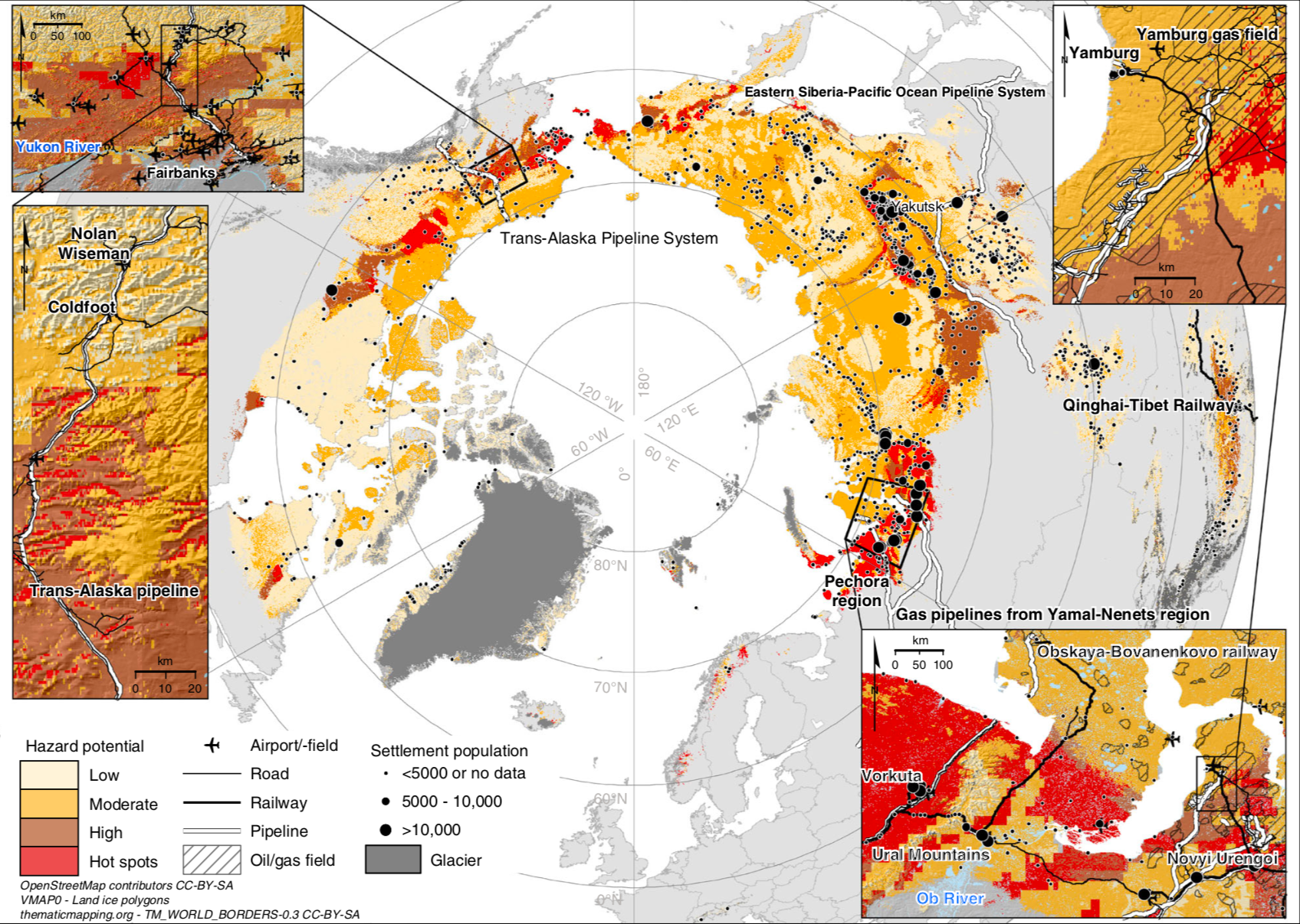 The worst impacts will be in Russia and northern Europe, places that are particularly dependent on the permafrost region. David Titley, the head of Penn State’s Center for Solutions to Weather and Climate Risk, wrote in an email that roughly 20 per cent of Russia’s population and its GDP comes from north of the Arctic Circle “so they will have some big bills coming up.”

What’s most harrowing about the study is that this is basically all due to warming already locked into the climate system. Because it takes the atmosphere so long to reach equilibrium with all the new carbon dioxide humans have added, the planet would continue to warm for decades even if all carbon emissions stopped tomorrow. These findings show humans have already disrupted the Arctic and point to the need to adapt to those changes ASAP.

At the same time, the study shows that reducing emissions now could provide meaningful benefits by century’s end, noting that meeting the Paris Agreement target of limiting global warming to 2 degrees Celsius “could stabilise risks to infrastructure after mid-century.”

“[This is] yet another study confirming the overwhelming evidence that our rapidly changing climate is impacting every facet of the globe, and every aspect of human civilisation,” Titley said. “I like to say this is part of the carbon tax we are being forced to pay, whether you ‘believe’ in climate change or not. And p.s., the ice doesn’t actually care if you accept the science or think this is all a hoax — it just melts.”