Ping a co-worker in the head with a foam dart and you’ll get an annoyed reaction at worst, but soak a co-worker with a water gun and you’ll find yourself in a meeting with HR. Jakks Pacific’s new Skid Shot blaster falls somewhere between the two. It automatically ingests and turns squares of toilet roll into sopping wet spitball projectiles that won’t damage electronics like a Super Soaker can, but will create enough of a mess to make you feel like a teenage delinquent again.

WHAT IS IT?: A blaster that automatically creates and fires toilet paper spitballs.
PRICE: £23.40
LIKE: It's one of the easiest ways to make a lot of enemies.
DISLIKE: Range and accuracy can be wildly inconsistent.

Do you remember the last time you fired a spitball at someone? Probably not, because it dates back to a time when the younger version of you didn’t recoil at the thought of putting a wad of tissue or toilet roll in your mouth, soaking it in saliva, and then cramming it into one end of a narrow straw.

Even more revolting is getting hit by a spitball and the feeling of that paper wad disintegrating and releasing its moist payload as it flattens against your skin. It’s a truly awful thought, which is exactly why the Skid Shot blaster is going to appeal to a select few grownups who never really did.

Out of the box, the Skid Shot requires a bit of assembly because compared to other toy blasters, it looks like a bit of an odd dock with contraptions hanging off it on all sides. It’s trivial to put together, but once assembled there’s still a few extra hoops to jump through before you start peppering people with paper. 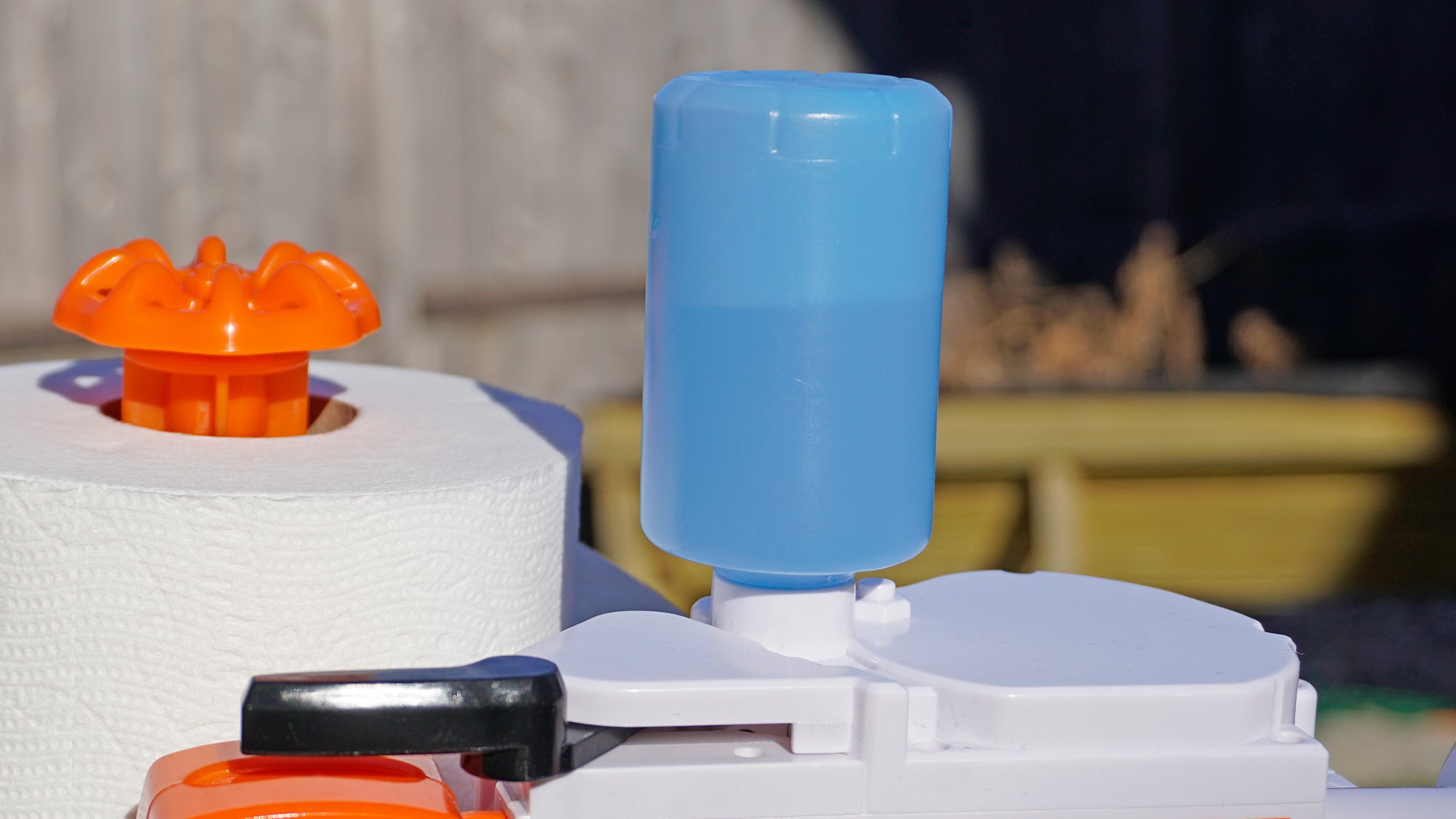 Unlike a Super Soaker, the Skid Shot sips water from its small reservoir, which will last through hundreds of shots. (Photo: Andrew Liszewski/Gizmodo)

A small water reservoir that sits atop the Skid Shot needs to be filled, but because it uses gravity to pull water into the toy’s internal mechanisms, it has to be screwed on while the blaster is upside down. Again, it’s not terribly complicated, but the Skid Shot is a little more finicky to operate and maintain than a water gun or dart blaster. 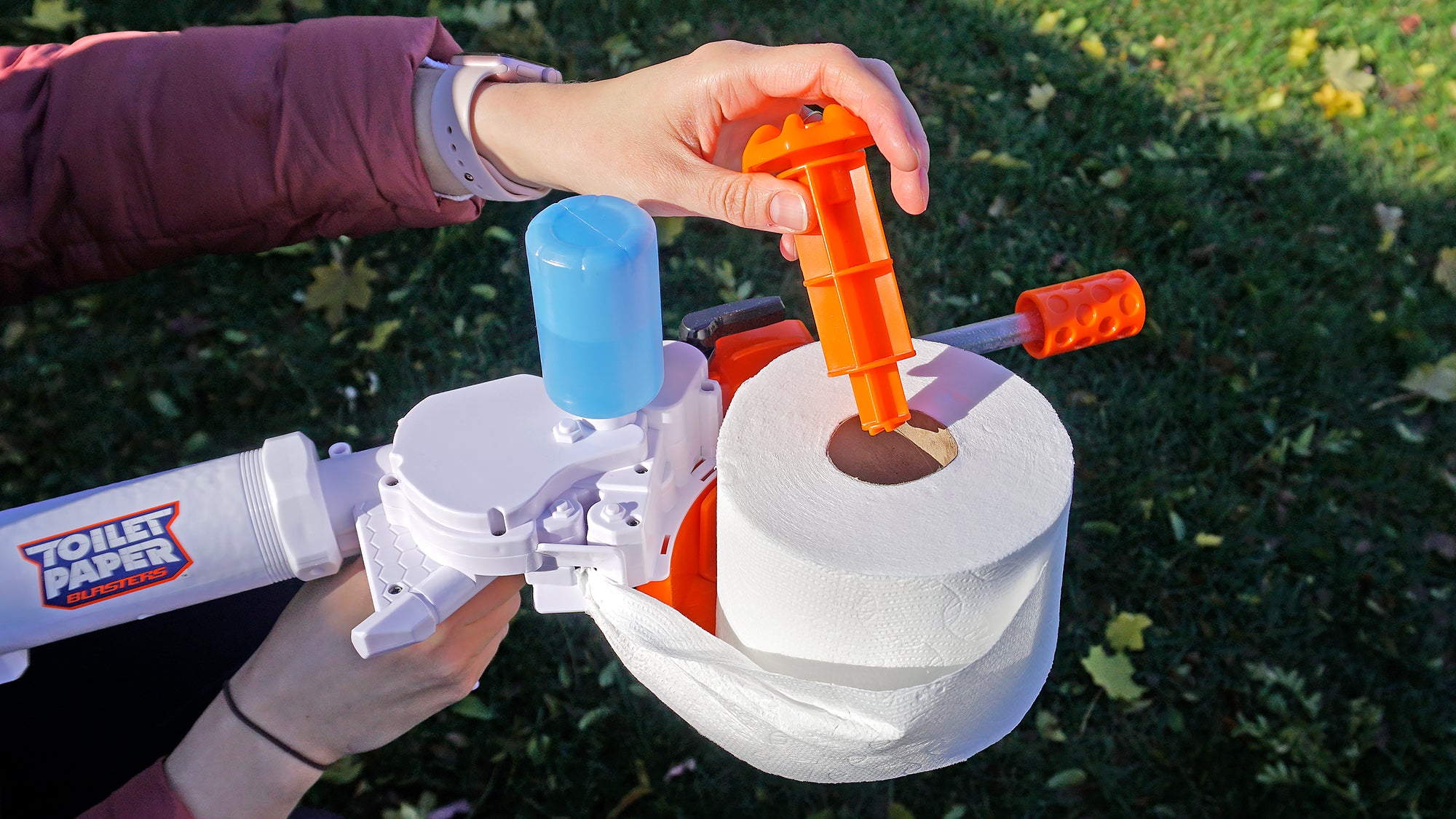 A removable spindle allows you to load a single toilet roll which provides well over 150 rounds of ammunition depending on how large a roll you’re able to mount. The toy’s packaging recommends sticking with two or three-ply TP for best results, which will reduce the number of shots you can fire before a reload is needed, but will also result in better performance (heavier spitballs) when you pull the trigger. 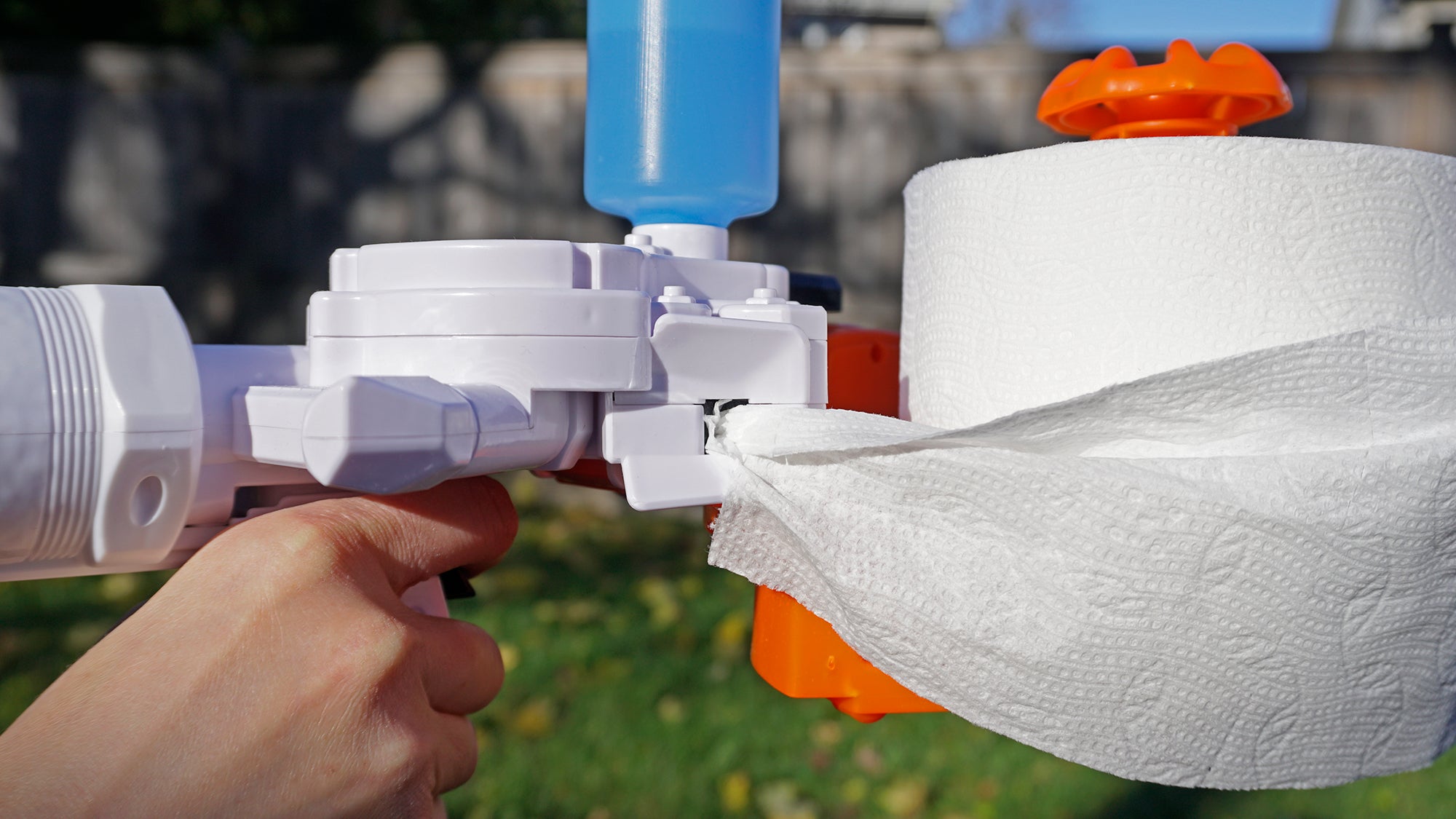 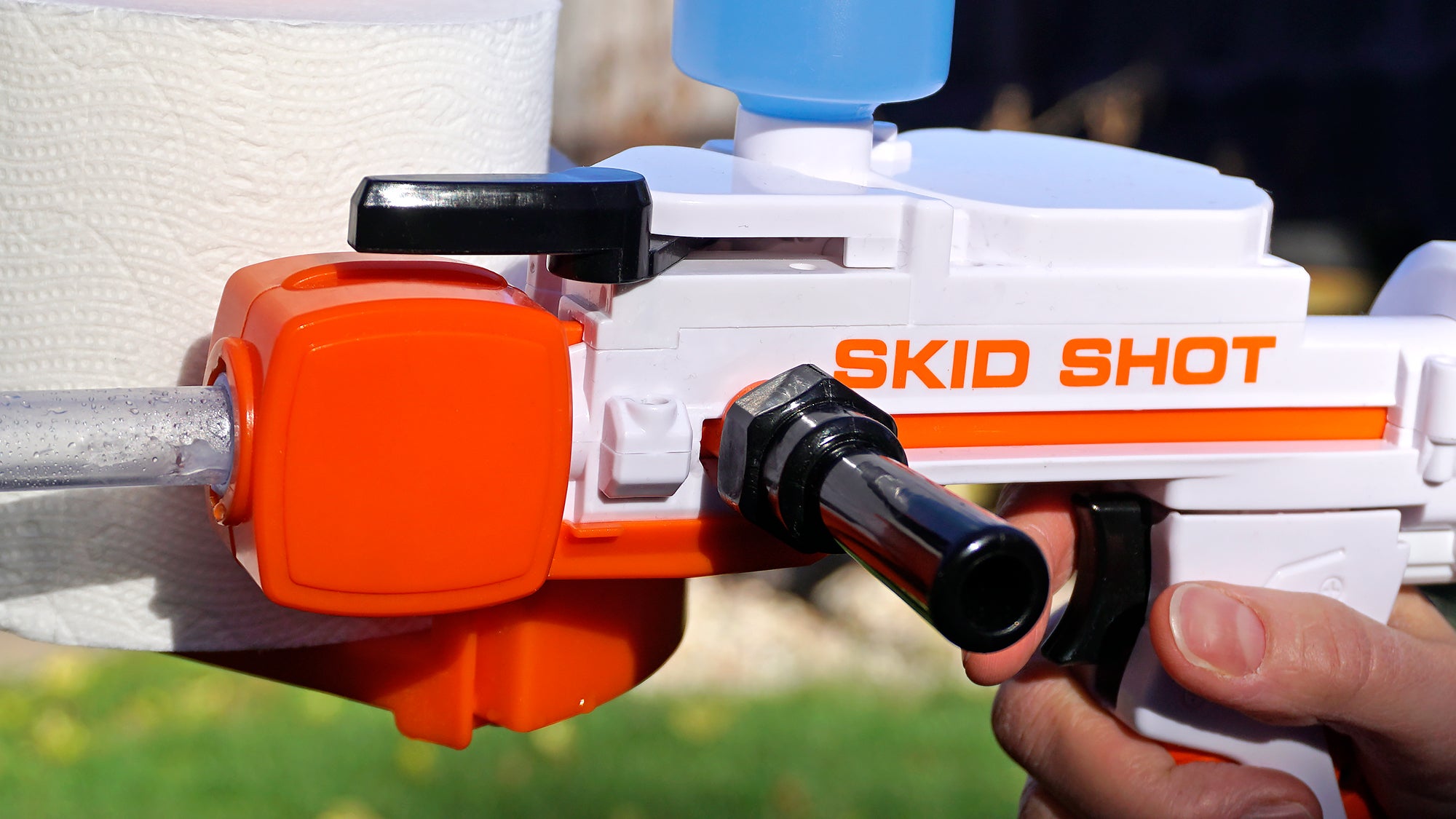 Two separate levers are needed to prime every shot, but it’s better than having to constantly feed the Skid Shot a fresh supply of batteries. (Photo: Andrew Liszewski/Gizmodo)

You’re not done yet, though. Priming the Skid Shot is a manual process that requires first sliding a smaller lever forward and back to advance the next square of toilet roll, and then sliding a larger firing lever forward and back to compress the spring-powered mechanism that generates a forceful blast of air. It sounds complicated, but in practice, it’s actually a satisfying feeling, and I always prefer toy blasters that don’t run on heavy batteries.

With enough practice you can fire a spitball every three or four seconds, so don’t expect to get the same rapid-fire speeds you’d get from automatic foam dart blasters that can often fire three or rounds every second. 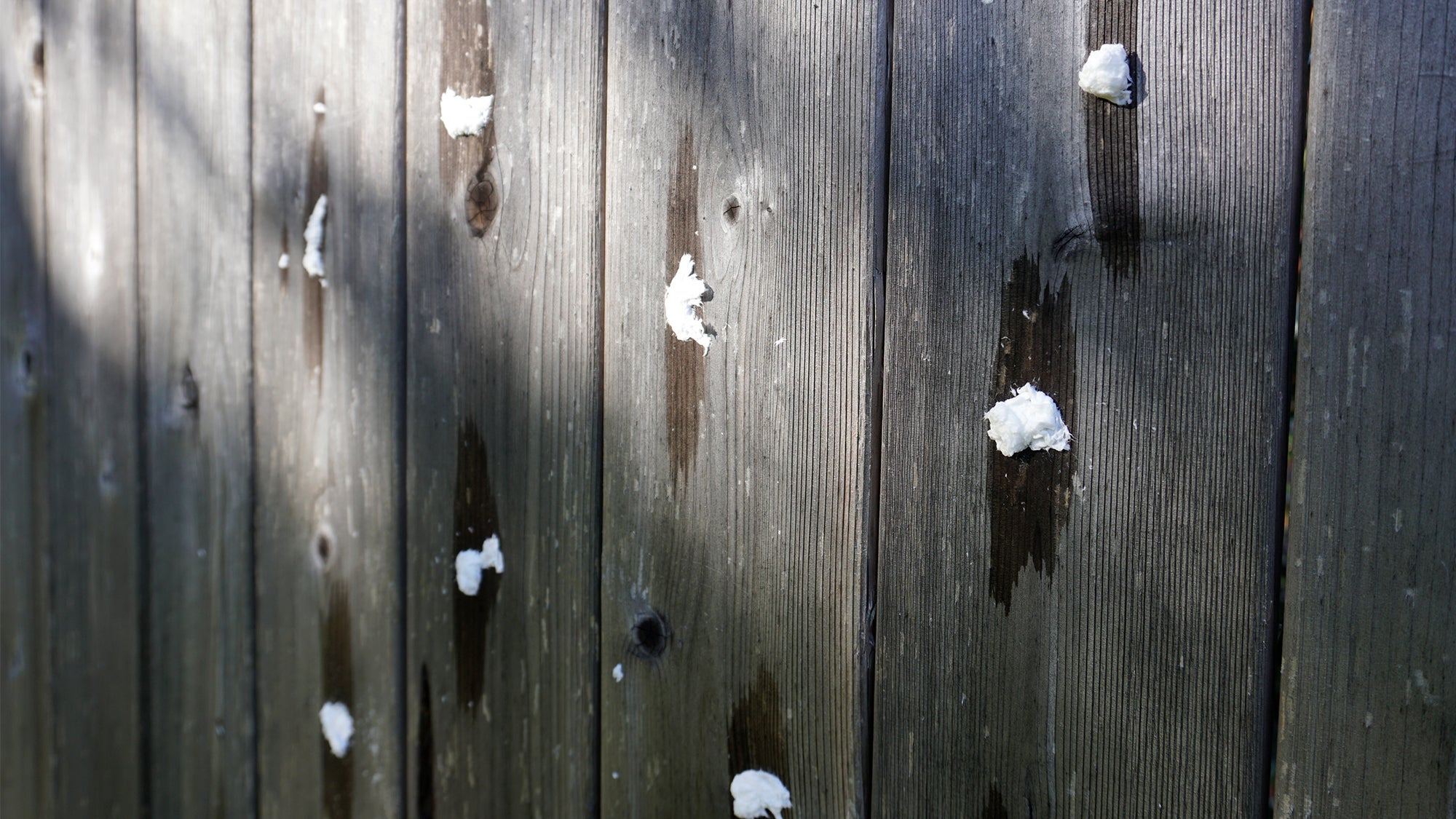 When the Skid Shot does hit its target, the resulting splatter is surprisingly satisfying, assuming you’re not the target. (Photo: Andrew Liszewski/Gizmodo)

So how’s the toy’s performance when you’re finally able to pull the trigger and release a moist barrage? Sometimes the Skid Shot will send a spitball flying 30 or 40 feet with a satisfying thwack when it hits its target. But other times the results are far less impressive, sputtering out the end of the barrel and landing a few feet away from you. Its performance can be wildly inconsistent from one trigger pull to the next, which is occasionally frustrating given the multi-step process of reloading the next shot.

But at the same time the Skid Shot is a toy that sells for just £23.40, and at that price point, I’m impressed it works at all. Nerf blasters are designed to fire a very specific size and shape of foam dart each time, and even then you’ll still get the occasional misfire. Every time you prime the Skid Shot you’re creating a soaking wet ball of paper that’s a completely different shape than the previous one.

Occasionally a misfire will leave a spitball stuck in the Skid Shot’s barrel. (Photo: Andrew Liszewski/Gizmodo)

But the barrel can be easily removed with a quick twist, letting you flush out jammed ammo. (Photo: Andrew Liszewski/Gizmodo)

As a result, occasionally when you pull the trigger the spitball doesn’t make it out of the barrel at all. So to clean out clogs or jams, the Skid Shot’s barrel can be easily removed with a quick twist, and flushed out with water. 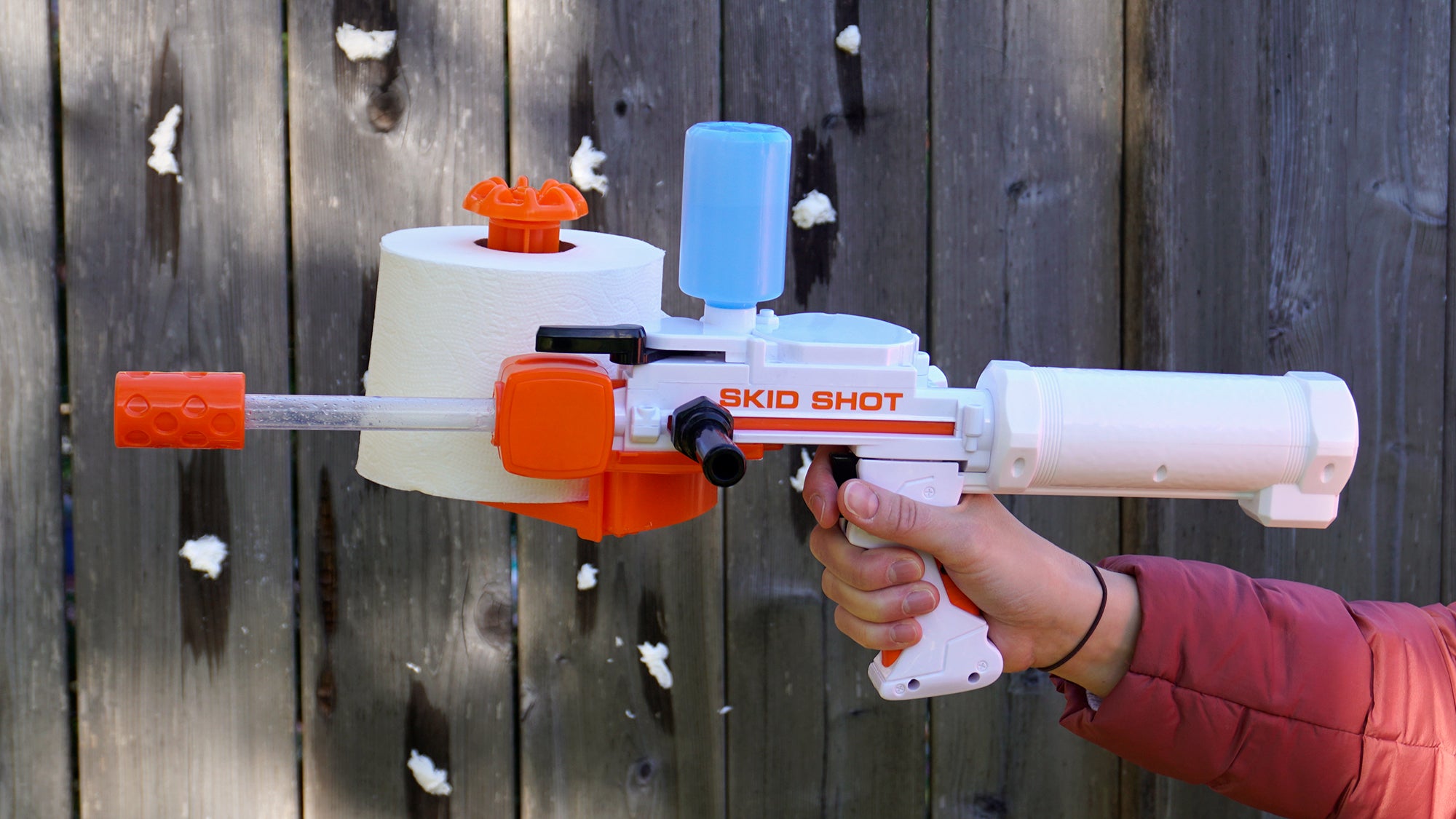 Are you looking for an easy way to get out of a job you hate? (Photo: Andrew Liszewski/Gizmodo)

Had Jakks Pacific put this on toy store shelves with a price tag north of £40, I’d suggest sticking with a traditional straw and box of tissues if you can stomach it. But at £23.40, you’ll probably have enough fun with this toy to warrant skipping a few fancy coffees during the week. Your results will vary wildly every time you pull the trigger, but when it does work, and a spitball leaves a giant soaking wet mess on your target, you’ll have a hard time suppressing a mischievous smirk.