I don’t care that Otto Bathurst’s Robin Hood played so fast and loose with history it basically exists in an alternate universe. On the contrary, it was one of the things I enjoyed the most about it. The movie was great when it was just having a good time, instead of trying too hard to make us take it seriously. But the historical inaccuracy, while not a deal breaker, is still something to discuss. And make fun of.

Robin Hood has been out for a week now and isn’t exactly doing well at the box office, earning only $22 million (£17 million) so far against a $100 million (£78 million) budget. It may turn out to be a flop (depending on what happens in foreign markets), but I’ve developed a strange fascination with this film. Mostly: How does a movie get so much wrong about its own history?

Before you pull out your space-age pitchforks, again, this movie is a period piece. There is evidence in the film that it takes place during the Third Crusade, which happened between 1189 and 1192. You could say it’s an “alternate vision” of our world, but given how everything that exists in the movie is just versions of things we have now, it’s unlikely that the movie was being speculative. It just wanted to look cool.

To shed some light on the weirdest things I spotted in the film, and how terribly (or terribly well) they fit into actual Medieval history, I turned to an expert. Specifically, Josephine Livingstone, a culture staff writer at New Republic who holds a PhD in English and taught a class on Medieval Literature at NYU. I sent her a list of anachronistic things I noticed in Robin Hood and asked her to enlighten me on whether they would have actually existed in the Middle Ages. Here’s what she said: 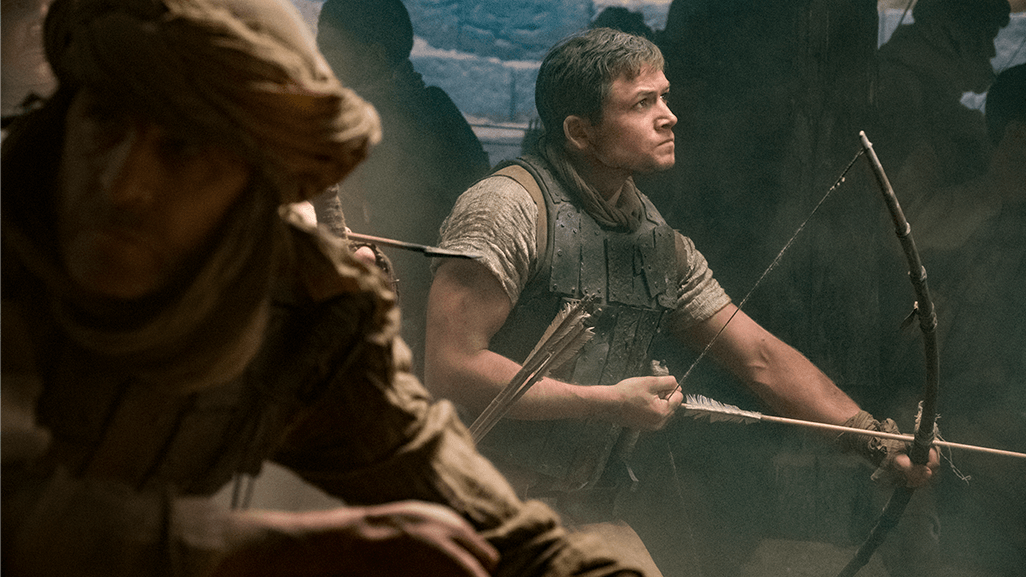 Robin’s been “drafted” for the war. (Photo: Lionsgate)

In the film, Robin Hood (Taron Egerton) is drafted to fight in the Third Crusade, issued by the Sheriff of Nottingham (Ben Mendelsohn).

Josephine Livingstone: Nope. Soldiers were not drafted into the Crusades. They could be strongly encouraged to go, as evidenced by the preaching tours of crusade sermons that abounded at the time. Soldiers would get a free pass into heaven, if that counts as bribery. Mostly they seemed to just want to take back Jerusalem. You could be forced to go if you had committed a crime, but that’s not the case for most people.

A soldier mounts a human-sized crossbow and fires multiple rounds of arrows into Robin Hood’s troops.

Livingstone: They did have crossbows. They’re used at the Battle of Hastings in 1066, for example. Backup proof: In this illustration from a Catalan manuscript of the four horsemen of the apocalypse, made in the 1080s, they’re holding crossbows.

[Elderkin: I asked Livingstone to clarify whether it could do rapid-fire shots, and she said probably not, since crossbows at the time loaded slowly.] 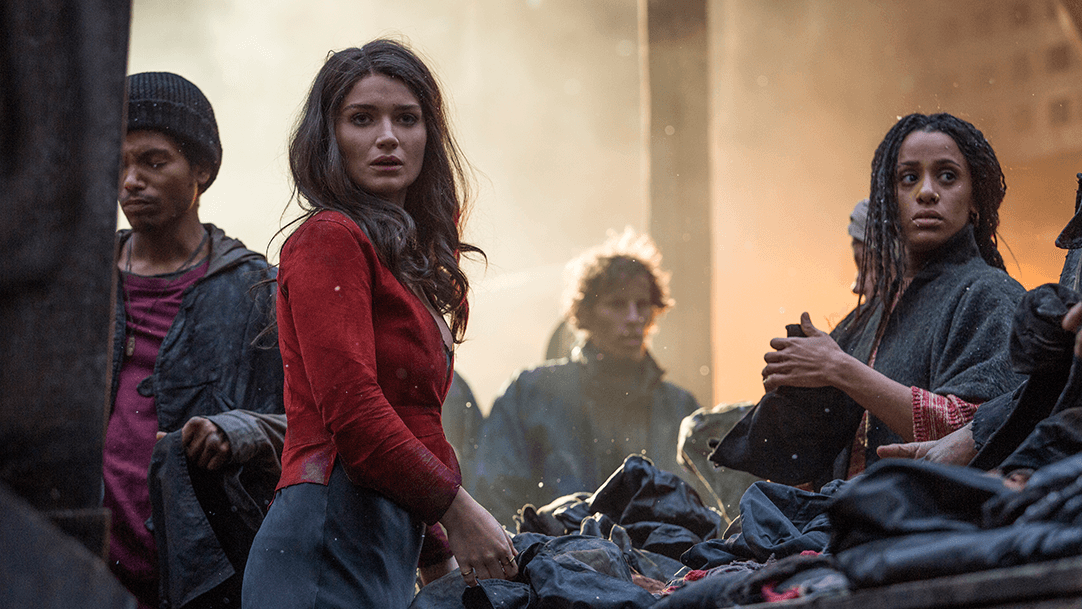 Marian (Eve Hewson) sporting one of her many unusual clothing choices. Also, that guy on the left is wearing a knit beanie and a hoodie. (Photo: Lionsgate)

Robin Hood’s battle gear shows him in short sleeves, and we see Marian in a variety of modern attire, including a midriff top at one point.

Livingstone: Ha, this one is funny. You might see a man’s knees once in a while, but as far as I know, poor women usually covered their whole bodies and hair.

Livingstone: Well, they would have been speaking a different language than Modern English in this time period. But there is a Middle English word “soudeour” for soldier, though I’d expect them to say “knight” (pronounced with a hard k) for “knight.” The Middle English for “troop” is “wered.” So a troop of knights would be “knight wered.” “Veteran” is an interesting case! It doesn’t appear in English until the 1500s. So that’s dead wrong. 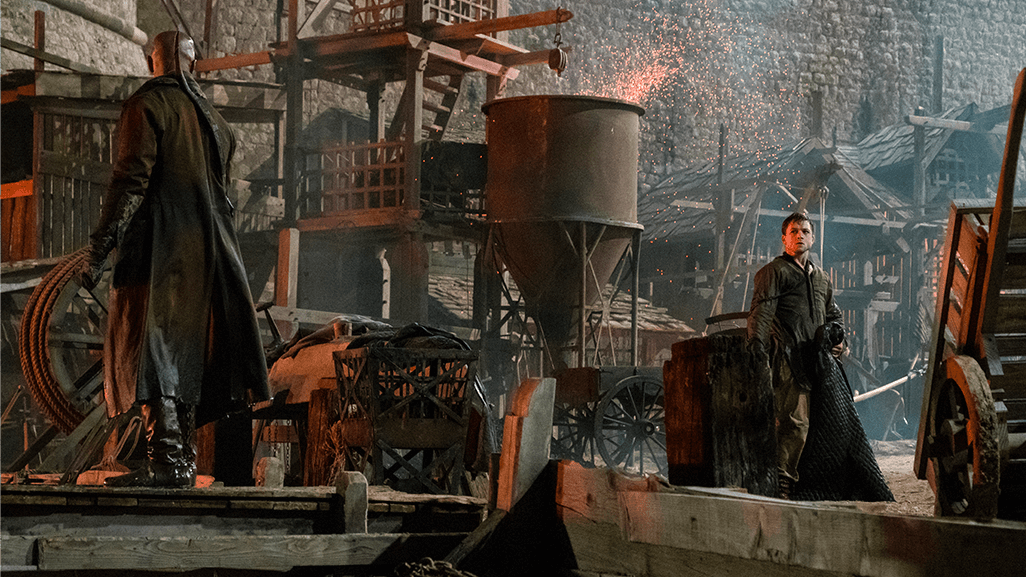 Many of the lower classes of Nottingham work at the coal mine, a large industrial-style complex complete with complex wooden/metal structures, mining carts, and large fiery explosions.

Livingstone: This is actually a time of great innovation in the mining department in England! Amazingly, this is exactly the time period when people began mining coal, specifically—the end of the 12th century. They had great technology, like pumps to clear out water and deliver air underground. But these mines tended to be smaller-scale, private affairs. They would rapidly cool rock that had been previously heated by fire to break it. Not sure if that would cause a big explosion. But wooden pulleys sounds totally normal. They’ve probably just blown up the proportions for the screen.

The Sheriff of Nottingham pushes forward a bill to fund the war with increased taxes. He puts it up to the lords for a vote, after debating its merits in front of the people.

Livingstone: The wars were very much funded by taxes. There were law courts and a centralised judicial system. That’s not to say late 12th century England was a democracy, far from it; it was a feudal system. At this time in history, specifically in 1188, there was a specific tax called the Saladin tithe. It was designed to fund the war, and it levied 10 percent of all goods and revenues going on in the country at the time. I’ll be honest and say that I don’t know whether these taxes were debated formally, but there certainly wasn’t a parliament as we know it now. That was established in 1215. 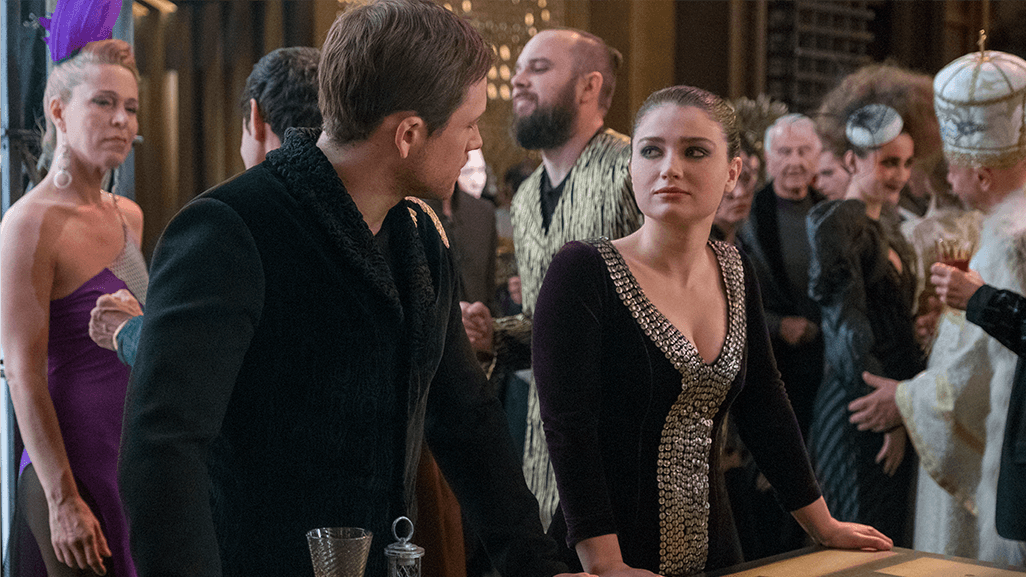 I will never tire of this image. (Photo: Lionsgate)

At a Canto Bight-style casino, we see characters betting on games like craps and roulette.

Livingstone: Medieval folks loved dice! Dice are ancient. We have dice surviving from like 3000 BC. They had card games too—which, like dice, would be played at a banquet or on the road as knights. But they didn’t have casinos.

Roulette was invented in France in the 17th century.

Friar Tuck sports a trendy pair of round wire-framed glasses during the latter half of the movie.

Livingstone: Nope! Glasses are later. I wrote about them here. An alternative would have been to....not show people wearing glasses.

[Elderkin: Eyeglasses are roughly traced back to the late 13th century in Italy.]

Robin Hood uses a mining cart that’s been set up on iron or steel rails.

Livingstone: Hmmmm, again I’m not an expert, but this doesn’t sound right at all. I’d have shown donkeys carrying whatever they’re mining.

[Elderkin: According to an article from Penn State University, medieval folks made a lot of advancements in iron and steel smithing that influenced later generations. But the first main examples of metal railways didn’t show up in England until the 17th century.] 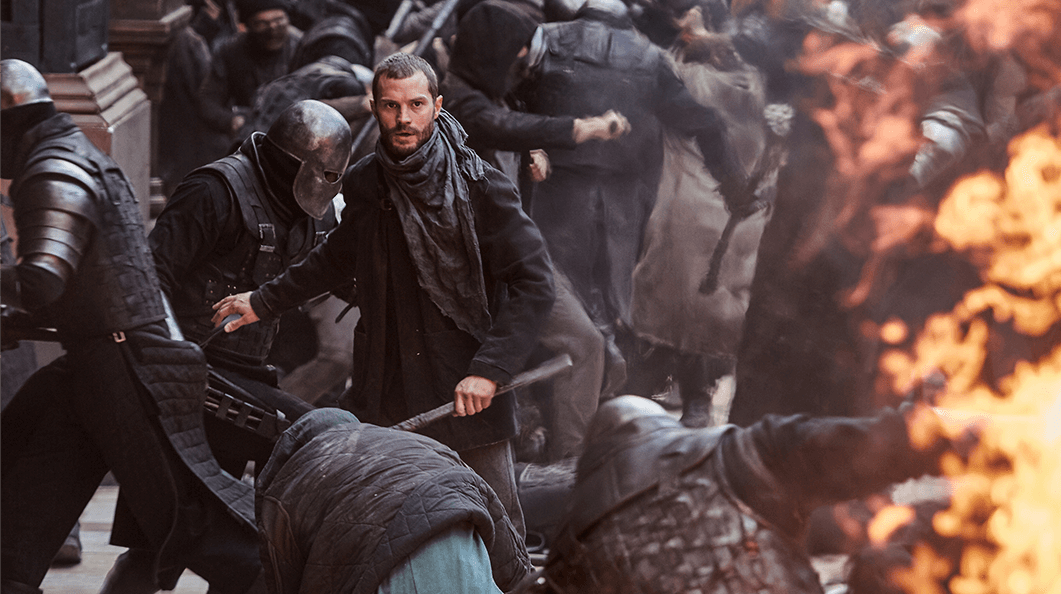 During the final battle, Will Scarlet (Jamie Dornan) pours what looks to be gasoline on the ground, then ignites it by throwing a cannon ball-shaped Molotov cocktail at it.

Livingstone: Interesting one. Fire was an important strategic tool in the third crusade. But there was a thing called “Greek Fire” that was actually used by the opposition in the Crusades. Greek Fire was a blanket term that Westerners used for any flame weapon, although there was a proprietary formula that the Byzantine state kept a great secret. It was special because it burned even on water. Nobody knows exactly how it was made. Apparently, the Byzantine forces made flamethrowers by spraying Greek Fire during battles. I don’t think that it was used at the Third Crusade though, and certainly not on the English side.

The commoners jointly rose up against the Sheriff of Nottingham and his soldiers, who were using riot shields to fend off their protests.

Livingstone: There were plenty of rebellions in Medieval England. Most were conducted by nobles or royals, as in “The Anarchy” of the 12th century, which was a conflict between Stephen and Matilda. But regular people did revolt too. About a hundred years after this [film] was set, the Peasants’ Revolt rocked England in response to a big tax increase, involving tailors, skinners, butchers—everybody. It was suppressed by noblemen’s armed forces and subsequent mass execution.

Robin Hood is currently playing in cinemas. For some reason.