10 Tricks for Quicker Multitasking on Your Smartphone

As our phones become ever more powerful and smart, their capabilities are increasing—so much so that we’re using them more and more like computers these days (quite literally sometimes). It also means Android and iOS are becoming better at multitasking, and here are the best ways of speeding through whatever it is you need to get done when you’re using multiple apps.

A quick note: when we talk about Android here (unless otherwise stated), we’re talking about the most recent, stock version of the software—Android 9 Pie on a Google Pixel phone. If you’ve got an older handset or one from a different manufacturer you might find some variations on your handset.

The old double-tap on the recent apps button (a square button, often with small lines through it) worked a treat for switching back and forth between the current app and the one you last had open, but in this brave new gesture-controlled era there’s an equivalent: Swipe right briefly on the home pill button to flick between the two apps you’ve been using most recently on your phone. The pill button is the small white bottom you’ll find at the very bottom of your screen. 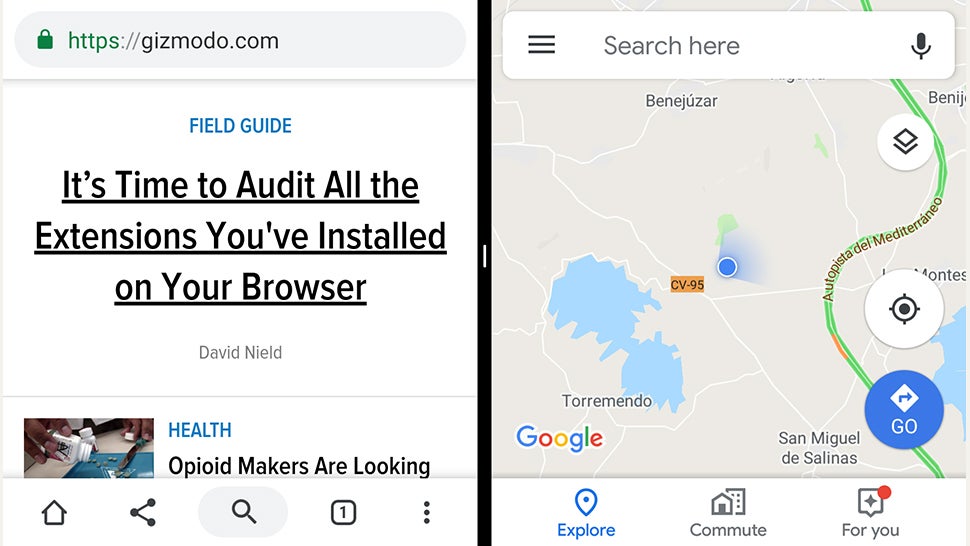 Split screen doesn’t always work that well, depending on the size of your screen and the layout of the apps you’re using, but it might come in handy now and again. Swipe up on the home pill button, then choose the app you want to start split screening with by tapping on its icon at the top (swipe left or right if the app isn’t immediately visible).

Pick Split screen and your chosen app docks up at the top. You then get to choose another app from your recents list—again, swipe to find it, or pick a frequently used app from the bottom. The black bar in the middle of the screen can be dragged around or dragged to the edge to exit split-screen mode. It works in both portrait and landscape orientations.

If you’ve got text to pass between apps then a long press will highlight it and show the Copy option; another long press in the other app at the cursor point brings up Paste. Use the blue handles or the Select all option to change the selection. You can also copy text from the multitasking screen mentioned above (swipe up on the home pill button).

Unfortunately copying and pasting images isn’t as easy on Android, unless your phone maker has added the functionality—you need to share images instead (see below). Long press an image in most apps (or the multitasking screen) and you’ll only get the option to share the picture, or to download it to local storage if you’re viewing it in a web browser.

Android’s sharing capabilities are very comprehensive but can occasionally be overwhelming. If you’ve got something to move between apps, chances are the Share button can do it—in most apps it appears as three dots linked by two lines. If you can’t immediately see the button, try tapping or tapping and holding on the item to share.

In Chrome, for example, long press the URL at the top of the screen to find the Share option. You’ll then see a host of options, including your most commonly used apps and various contacts on various services. You can’t do too much to edit this menu, but you can pin apps to the top (and unpin them again) by tapping and holding on the relevant icon. 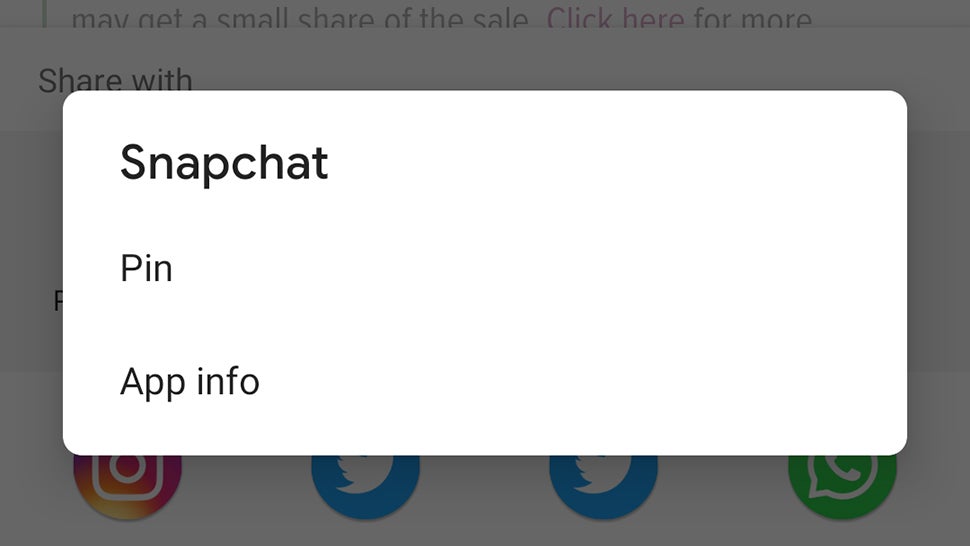 Android being Android, you’ve got plenty of apps willing to lend a hand to make it a little easier to switch quickly between apps and use them on top of each other. Take Floating Apps (freemium), for instance, which lets you arrange open apps more like a Windows or macOS desktop—it can be really helpful if you’ve got enough screen real estate to spare.

Plenty of apps, including Shortcutter (freemium) and Launchify (freemium), bring up shortcut menus with a swipe or a custom gesture. Then there are the Android launchers of course—such as Nova Launcher (freemium) and Evie Launcher (free)—which let you do everything from cramming in more icons on screen to switching apps with gestures.

Assuming you’re using an iOS device with no home button, swipe up from the bottom and hold to see recent apps, then swipe left and right to move through them. Alternatively, swipe left on the home bar at the bottom to go through your apps one by one.

If you do have a home button, double-tap it to see the carousel of recently used apps. If you’re on an iPad, you can swipe up a short distance from the bottom of the screen to see the dock, as well as swipe right with five fingers to get to your most recent apps. Tap and hold an icon on the home screen then drag it down to add it to the dock at the bottom. 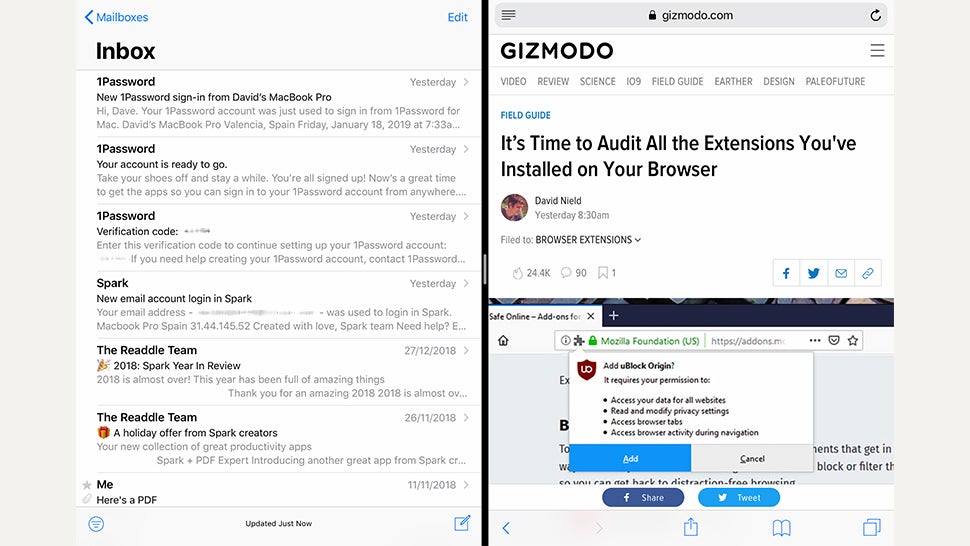 Not all iOS devices can do split screen, but if you have a newer iPad or a Plus-size iPhone you’re good to go. You’ll first need to put your device in landscape mode. With an app open, drag another over it from the dock to use Slide Over—you can then make the second app disappear and reappear with a swipe on the handle at the top. Drag an app all the way to the side of the screen, then adjust the black bar in between to use Split View, two apps side by side.

These split-screen modes also enable simple drag-and-drop functionality, which can be really helpful for iOS multitasking: Tap and hold on a block of text or an image in one app, then move it over to the other app. Assuming the app supports text and image pasting (you’re in a Google Doc, for example), the object you’ve copied gets pasted in.

A tap and a hold are enough to highlight a block of text ready for copying (use the blue handles at each end if you need to make adjustments). For images, depending on the app, you might need to tap and hold and then drag up to get the Copy option on screen; alternatively, you might have to hit Share (the upward arrow button) then Copy.

In the receiving app, another tap and a hold will bring up the Paste option wherever in the app the cursor happens to be. Thanks to some magic recently added to iOS by Apple, this copy and paste routine works across multiple iOS devices as well—like an iPhone and an iPad, for instance—as long as you’re signed into both devices with the sample Apple ID.

In some multitasking scenarios, sharing between apps using the standard Share button—that upward arrow rising out of a box—might work better than copy and paste. As on Android, you’ll find a whole host of options here, including sharing to specific apps, saving to your device, adding to a note, or sending to someone else via an AirDrop link.

To customise the options that appear when you call on the iOS share action, scroll to the right to find the More... buttons (there’s one on each of the bottom two rows). When you’ve done that, you can show or hide specific apps and options using the toggle switches, or change the order of your choices by dragging the handles on the right. 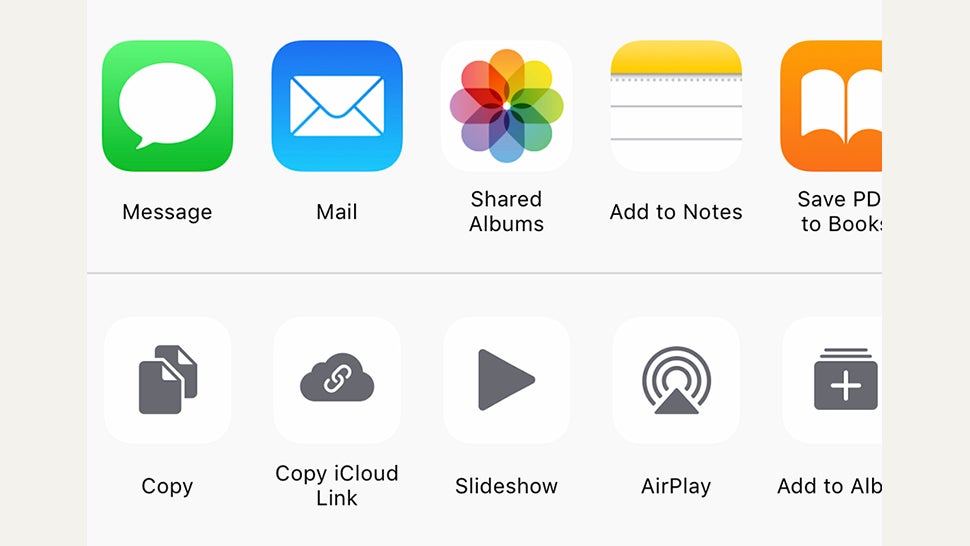 Don’t forget the Siri Suggestions pane, which you can find by swiping to the far left of all your home screen: Frequently used apps appear here, and if you tap Show More you can see two rows of them rather than one. The same Siri Suggestions list of apps can be reached with a four-finger swipe down on the home screen, which you might find easier.

However you get to the Siri Suggestions pane, you’ll also see a Search option above it—this is another way of finding apps, contacts, documents, files, calendar events, music, map locations, and more. If you’re working between multiple apps at the same time, it’s an option to remember if you need to get to something you need more quickly.