Deadly Class, and the Powers and Limitations of a One Man Show

The creator of the Deadly Class graphic novel series isn’t on the sidelines for the adaptation of his 2014 Image Comics work with Wesley Craig, Lee Loughridge, and Rus Wooton. He’s put himself front and centre. Serving as co-creator, and showrunner alongside Mick Betancourt (who replaced Adam Targum last May), Remender is heavily involved behind the scenes for the Russo Brothers-produced series. Remender is writing, producing, consulting, and several other “-ings” that make a show happen.

“One of the reasons I’m here is to make sure that the book is translated with the intent that [Deadly Class artist Wes Craig] and I had when we created the book,” Remender said during a set visit interview. “It was a matter of just having people that were genuinely inspired by the source material wanting to honour it.”

And the people around him know this. Several of the folks I spoke to on set, from the production team to the actors, were not only dedicated to bringing Remender’s vision to life, they see him as the person to turn to when it comes to anything and everything Deadly Class.

“It’s been amazing to sort of see this world created by Rick, and the transition of where we’re going to go from the graphic novel to the series,” Benedict Wong, who plays Master Lin, said during a set visit interview. “It’s great to have Rick there, and it is his baby.”

It’s no surprise Remender would want to be heavily involved in the adaptation of his and Craig’s work, as it’s a story Remender is intimately connected with. Deadly Class, first released in 2014, might be about a young man named Marcus (played in the adaptation by Benjamin Wadsworth) who joins a high school for assassins, but it’s just as much Remender’s story as it is Marcus’s. Much of Deadly Class’ world and its characters are based on Remender’s own life as a kid growing up in the 1980s. During io9's set visit, Remender talked about how he originally created Deadly Class so he could tell stories about his experiences in what calls an underrepresented subculture in the popular era. 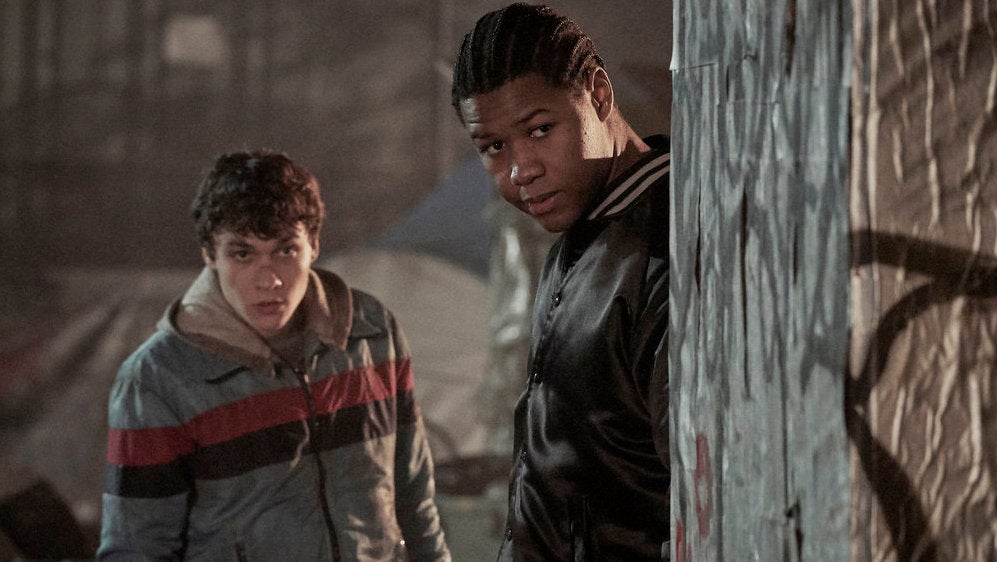 Deadly Class does succeed in that objective. It’s very different from shows like Stranger Things or the ‘80s episodes of Black Mirror, as it’s about a very specific subset of 1980s counter-culture. The kids in Deadly Class loathe the status quo. While in their San Francisco-based school, they drunkenly rant about the evils of a capitalist system, smoke weed out of bongs in fish tanks, and quiz each other on how many flip-side tracks from the Cure they can name off the top of their heads. Being outside of the “mainstream” is their version of normal.

There’s also the ongoing thread of mental health as it connected to American life and politics of the 1980s. The show takes place after then-President Ronald Reagan’s federal policies led to the deinstitutionalisation of many mentally ill patients, which is seen today as a policy failure. Deadly Class shines a light on those failings, with Marcus serving as a wise-beyond-his-years orator of truth, taking a critical lens to a problem that wasn’t fully understood at the time. In that vein, the show is giving that historical event modern context.

The one caveat that comes with adapting period pieces—including ones written well after the time period in question, as is the case with Deadly Class—is how we interpret them today. The rise in cultural criticism, especially from the perspective of marginalised groups, has changed how we view many period works whose elements might seem outdated, or even bigoted, by modern standards. Sometimes this results in change, like how Nintendo removed a racist Mr. Game & Watch reference from Super Smash Bros., despite it being from a 1980s game series. Other times, context is added: Older Looney Tunes and Tom and Jerry cartoons now come with a disclaimer about the importance of seeing the cartoons as they were. In the disclaimer, Warner Bros. says it doesn’t condone the racist scenes and caricatures, but says to remove them would be erasing history. In his interview, Remender presented himself as falling into this line of thinking.

“We’re finally in a culture that’s desperately trying to rewind a lot of really bad mistakes,” Remender said. “But the danger there is then you try to whitewash or water down our entertainment, so we don’t take a look at what it actually is.”

There was one thing Deadly Class did choose to change before production, and that was the use of guns at school. In the graphic novel, gang members routinely brandish guns inside the school, but the production team changed this because of today’s epidemic of school violence. They said we would see no guns at school, the in-world justification being that Master Lin abhors them (the first episode of the series does feature a trophy case with two guns inside, though nobody uses them). The actual issue of gun control and school violence won’t be addressed in the first season—although actor Luke Tennie, who plays Willie, hopes it is discussed someday.

“For me personally, instead of ignoring an issue I would prefer to discuss it, especially using art. So we’ll see. I hope they do,” Tennie said. 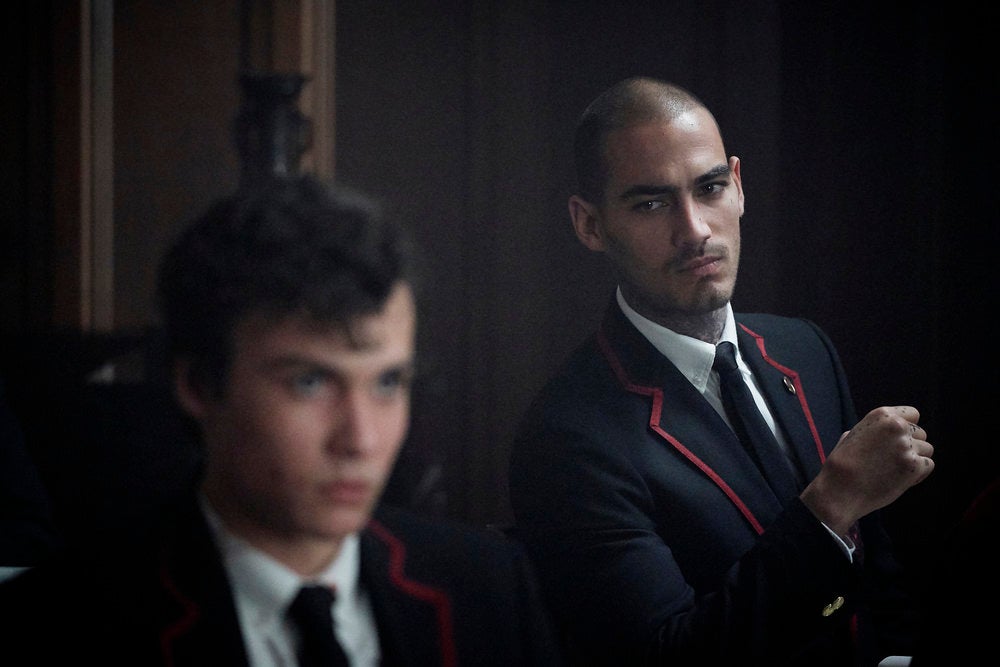 Chico (Michel Duval) and Marcus are at odds because Chico thinks Marcus has been hitting on his girlfriend. (Photo: Allen Fraser/Syfy)

There are some uncomfortable character depictions in Syfy’s Deadly Class, all of which stem from the graphic novel—and I’m not just talking about “Fuckface,” the villain who engages in bestiality and masturbates to footage of dog shows. Most of the kids who attend King’s Dominion, the high school for assassins, have segregated themselves into racial groups, taking on names like Kuroki Syndicate and Final World Order (F.W.O). Those groups and their members tend to play into stereotypes, like Chico’s (Michel Duval) “machismo” and Saya’s (Lana Condor) reliance on honour. When asked about addressing the risk of stereotyping in his work, Remender shrugged it off, saying the characters were based on real people he knew growing up.

“All I can do is build characters based on people that I knew, and try to put into them what was honest and real about who they were in the era in which we were living as teenagers,” Remender said. 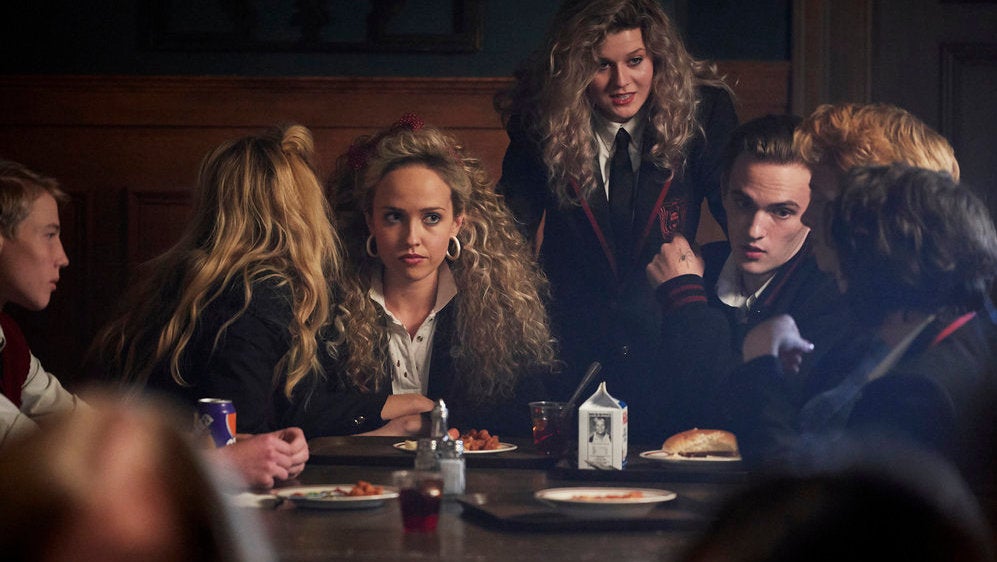 Brandy (Siobhan Williams) and others in the Dixie Mob gang, made up of children of white supremacists, KKK members, and Neo-Nazis. (Photo: Allen Fraser/Syfy)

The characters are diverse and played by an equally diverse cast, but upon watching the first four episodes of the season, some of the things they said and did come across as questionable.

Brandy (Siobhan Williams) is probably the most controversial character, as she is an actual Neo-Nazi. She passes Marcus a class note that contains a racial slur surrounded by swastikas, talks about how “the South will rise again,” and is overheard making racist jokes about Hispanic people. She does face the occasional backlash, like when Marcus throws a drink in her face during a party, but for the most part, people laugh her off. She’s presented as the popular girl. The cheerleader. She pushes people into closets for Seven Minutes in Heaven and bullies the goth girl at the school dance. She’s the Queen Bee.

Given the rise in Neo-Nazi activity in the United States over the past few years, it was surprising to see a white supremacist character be given that kind of platform, without a lot of pushback from the other, more diverse characters (although that could very well change in subsequent episodes). Remender had this to say when asked whether the rise in alt-right activity over the past few years caused him to re-examine Brandy’s role:

Why would I change that? Have racists gone away? What’s changed is we’re all very frightened to talk about it, [that] we’re all going to get a Vox article written about us and somebody’s going to take a giant shit down our throat if we say it wrong...How does the current landscape change how I deal with an ugly racist? Other than to show an ugly racist, and show their ideology, and then to blow it up. The responsibility you have is not to paint them as a strawman, is to hear that sort of stupid ideology, and then to put a spotlight on it and melt it away. And so in a character like Brandy, she’s based on people I was around during those years that were really ugly and just sort of backwards. Just sort of cooked in an ideology where their worldview became xenophobic because they lived in this nothing.

It is up to interpretation whether Brandy’s characterisation can be called “ugly,” but it’s important to note that Brandy was based on people Remender met when he lived in a small rural community in the US state of Arizona—not a diverse high school in San Francisco.

Deadly Class is Rick Remender’s vision. That can be a good thing, but it can also present some issues. While there is a diverse group of writers and directors behind the scenes of Deadly Class, many of the characters and journeys still end up feeling filtered through one man’s lens. A lens that’s rooted in nostalgia. It’s Remender’s memories of other people and how he saw them—in some cases, maybe not as they actually were. But just like with Reagan’s mental health crisis of the 1980s, which is explored in Deadly Class through the lens of time and experience, sometimes we can’t look at something just as we thought it was. You need another point of view.