By Kim Kelly on at

The Wound Man (or Man of Wounds, depending on how you translate Fasciculus medicinae, the 1491 medical treatise in which his image first appears) is one of the most well-known medieval surgical diagrams going. It’s up there with da Vinci’s Vitruvian Man (né 1490) but is far less aesthetically pleasing than what everyone’s favourite Renaissance Man had cooked up. Rather, the Wound Man—his poor mangled body decorated with bites and pustules, smashed by rocks, and pierced with various deadly implements—wears a look of serene resignation that belies the myriad violent indignities that have been visited upon him.

Surgery was a last resort for the desperate and the doomed.

This macabre teaching aid vividly demonstrates the various injuries that a person may receive through war, accident, or disease. It also hammers home the the incontrovertible fact that—no matter how regal, battle-hardened, or beautiful we may fancy ourselves to be—the human body is essentially a meat sack full of goo that is perpetually on the verge of crapping out on us. 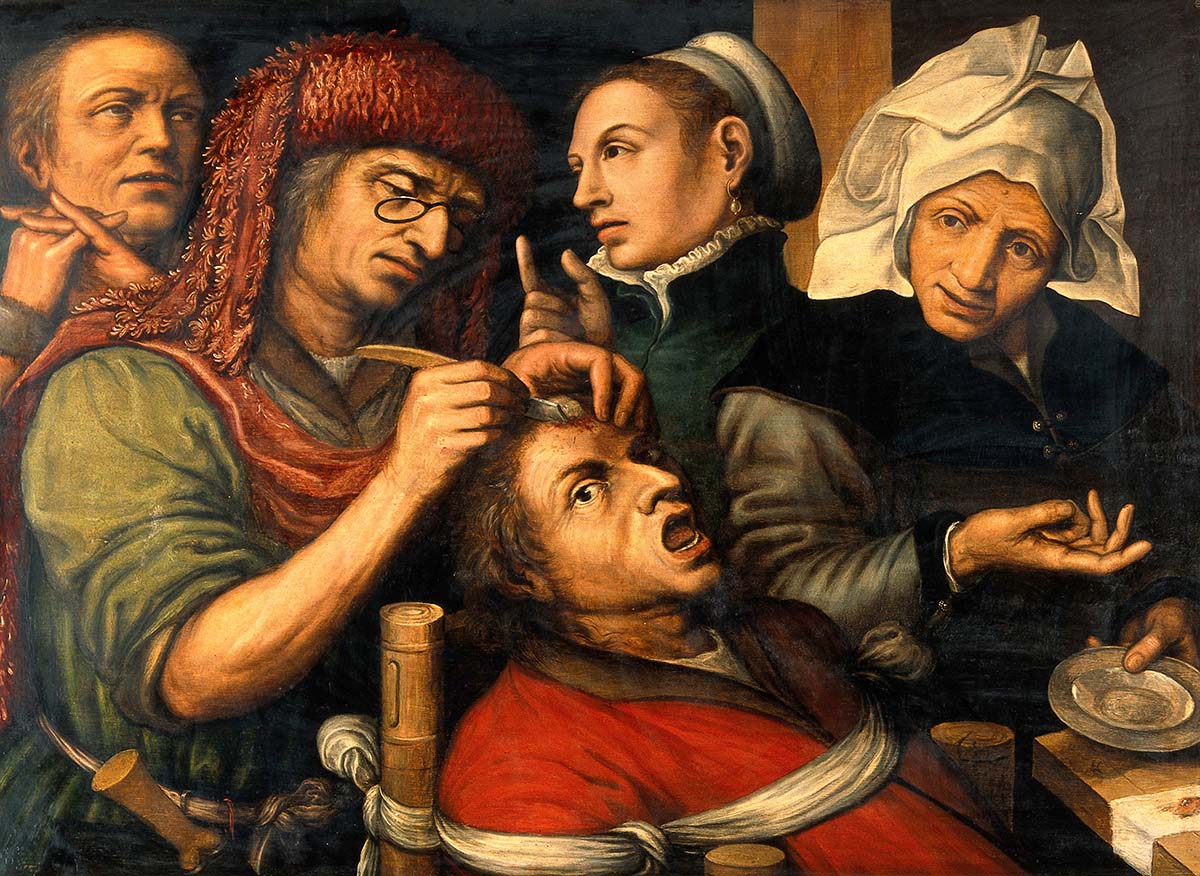 An operation for stone in the head. Oil painting by a follower of Jan Sanders van Hemessen. (Image: The Wellcome Collection)

That corporeal fragility and the lengths to which intrepid (and otherwise) surgeons throughout human history have gone to address it via novel, absurd, and often downright terrifying surgical interventions is the subject of Dutch surgeon Arnold van der Laar’s new book, Under the Knife: A History of Surgery in 28 Remarkable Operations. The Wound Man appears therein, alongside a colourful cast of characters hovering on and around the operating table. We see superstar surgeon Robert Liston at work, and learn about the medical troubles of Queen Victoria, Harry Houdini, Vladimir Lenin, a smattering of popes, and the Sun King himself, Louis XIV, who became the proud (and very public) recipient of France’s first successful anal fistula removal.

Van der Laar outlines numerous bloody miracles and missteps while also taking care to explain the science and methodology behind the operations themselves; he is a surgeon, after all, and attention to detail is kind of their thing nowadays. He scoured the archives of the Nederlands Tijdschrift voor Heelkunde, the journal of the Dutch Surgical Association, and plucked out 28 examples of notable surgeries—many of them the first of their kind—that range from the exhilarating to the tragic. He even takes the reader back to the Biblical era, and explains the case of Abraham’s alleged invention of circumcision to combat phimosis, a common penile ailment that bedevilled desert-dwelling folk in those days (open flowing robes, sand, dust, a lack of water for washing, and a pronounced lack of underwear was a recipe for disaster). 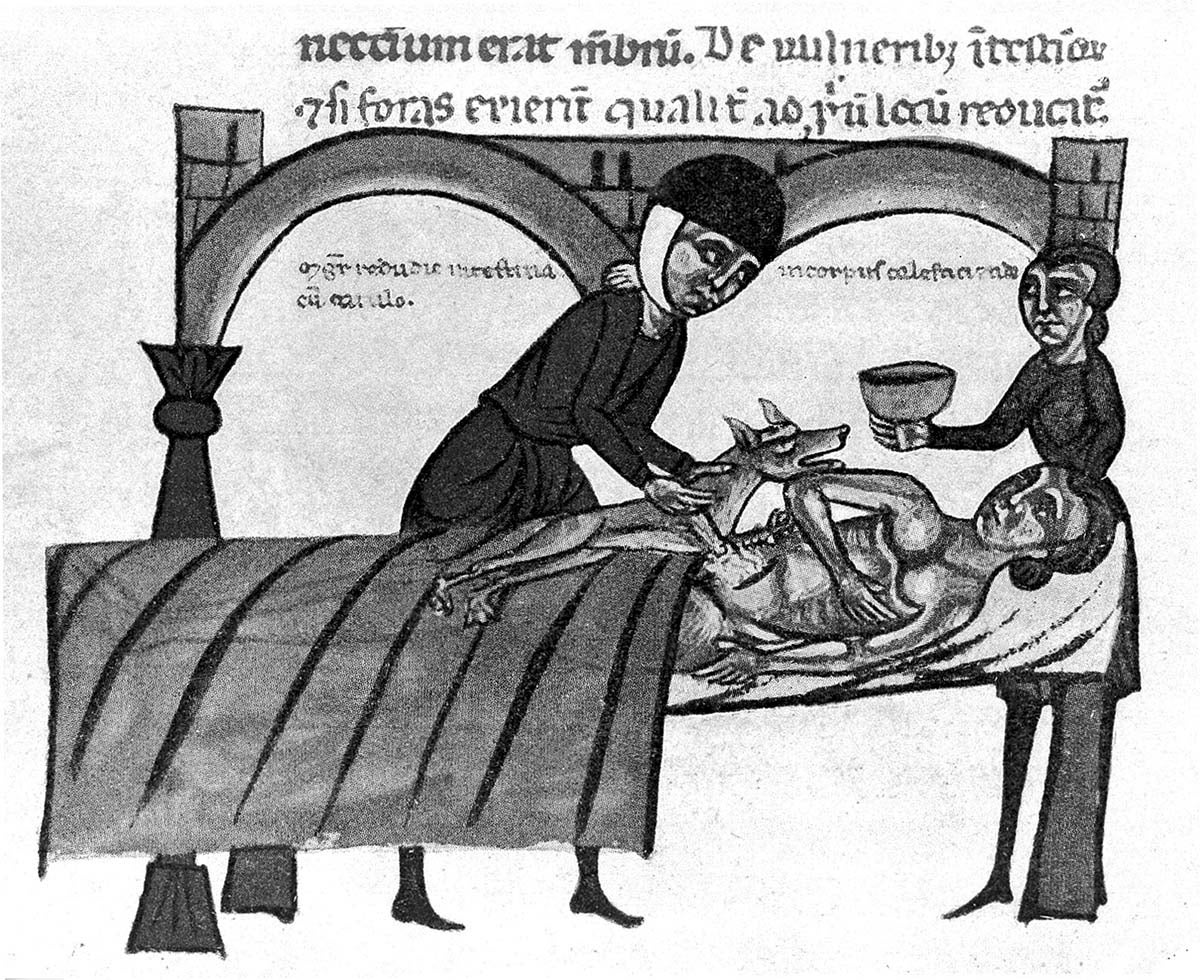 He also gets more existential, tackling questions like, “What kind of people are surgeons? What on Earth makes you want to cut into someone’s body, even if they can’t feel it?” from his own perspective as an established expert in his field. He is frank about the immense pressure and sense of responsibility he and his fellow surgeons feel as they use their hands to try and heal patients, and about the agony of self-doubt, and of seeing a patient die in your care. The people behind the mask may seem like heroes or magicians to those of us looking up from the operating table—but they are still fallible, and messy, and above all, human. Being a surgeon has never been an easy job, and while the tools and circumstances have changed, this branch of healing remains a constant struggle.

“Modern surgeons would never dare to inflict such pain to their patients, or such terrible risks of killing them with their operations.”

“Throughout the book I express my utmost surprise about how little the old surgeons seemed to have been moved emotionally with the suffering they imposed on their patients,” he told Gizmodo via email. “Reading old reports on operations without anaesthesia, I repeatedly think, how was this possible? Modern surgeons would never dare to inflict such pain to their patients, or such terrible risks of killing them with their operations.”

Surgeons are now hailed for their precision, knowledge, and dedication to the healing arts, but well into the 18th century, they were regarded as little more than butchers. Prior to the adoption of concepts like basic hygiene (to say nothing of anaesthesia), they did little to disabuse their patients of this notion. As van der Laar said, “Most patients had a scar for life, not only on their skin, but also on their minds.” 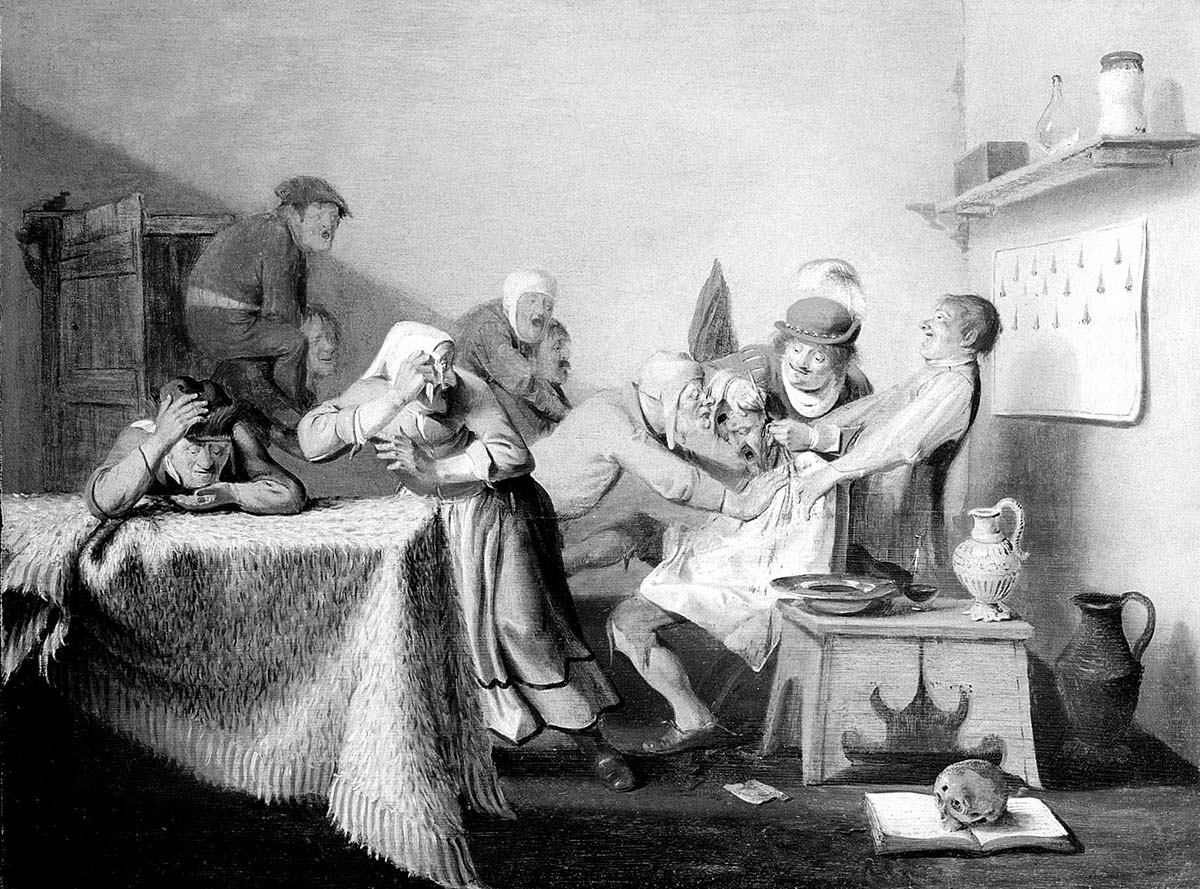 An operator making an incision behind the ear of a seated patient, two assistants restraining the patient, and six other people in the room. Oil painting attributed to Joachim van den Heuvel, 163-. (Image: The Wellcome Collection)

The odds of surviving a surgical operation were appallingly slim, and even if you did make it through, odds are that an infection (or worse) would finish you off later. Surgery was a last resort for the desperate and the doomed.

Van der Laar kicks off the book with the story of Ambroise Pare, a 16th century French army-surgeon who found out that most surgical interventions do more harm than good. “At this point the transition from the craftsman-surgeon to the scientist-surgeon started,” he explained. “This transition is completing only now, with evidence based surgery gaining power over the old expert opinion surgery.” 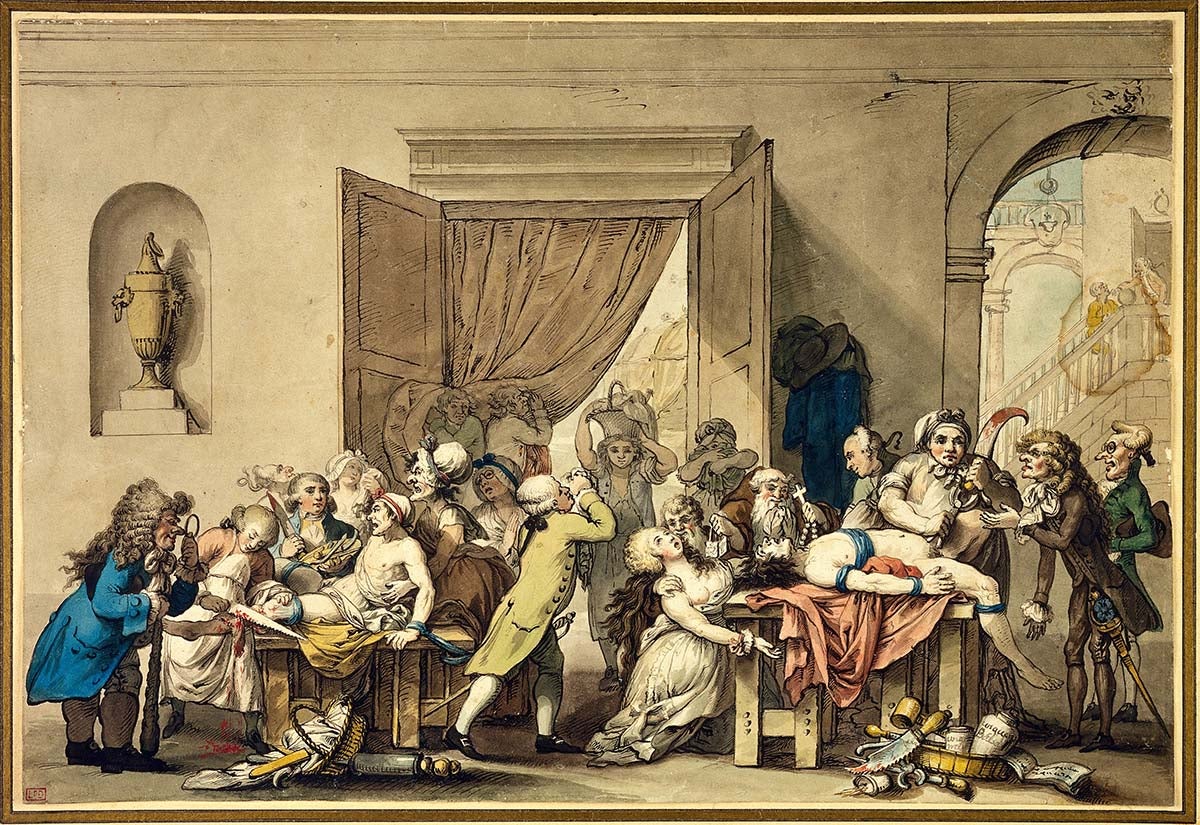 A “theatre” of medicine and surgery. Watercolour by Johann Heinrich Ramberg, ca. 1800. (Image: The Wellcome Collection)

The next case van der Laar describes concerns one Jan de Doot, a Dutch smith who underwent two unsuccessful surgeries to remove an extremely painful bladder stone, and then decided to take matters into his own hands—literally. While his wife was at the market, de Doot took a curved knife and made three crossways cuts to his perineum, then used his index fingers to tear the wound wide enough for the stone—which was “larger than a chicken’s egg and weighed four ounces”—to fall out. He survived this primitive lithotomy (and must have felt at least a little smug about the whole thing) but was left with a huge, festering wound between his legs for the rest of his life.

Frau Therese Heller was a bit luckier, though only just. In 1881, she underwent the first successful distal gastrectomy in 1881, and managed to survive for a good four months after the fact (three months longer than the first male patient to give it a spin). Viennese surgeon Theodor Billroth removed a massive tumour from the 43-year-old mother of eight’s stomach; prior to that, Billroth performed the first successful oesophagectomy on a dog in 1870, the first successful laryngectomy on a human in 1873, and also found time to discover the streptococcus bacteria in 1874.

“Most patients had a scar for life, not only on their skin, but also on their minds.”

Then as now, surgeons and medical folk in general were a curious bunch, and some particularly celebrated surgeons like Billroth, Lister, and brain surgeon Harvey Cushing pioneered multiple techniques and notched various critical discoveries. Cushing was one of the most influential neurosurgeons of his time, and his list of professional achievements is daunting, to say the least. In 1926, he introduced a novel new invention—engineer William Bovie’s electrosurgical generator—into the operating theatre in hopes of finding a new way to stem bleeding during surgery.

His use of electrocoagulation (a process by which heat is used to stem the flow of blood by converting the proteins in blood and the surrounding tissues from liquid to solid) to cauterise a tumour kept a brain tumour patient from bleeding out during a prolonged operation. It also turned Cushing into something of an evangelist for the technology, and allowed him to successfully complete previously unthinkable surgical interventions. Almost a century later, Bovie’s electrocoagulation device has remained almost unchanged, and is used in operating room across the globe. 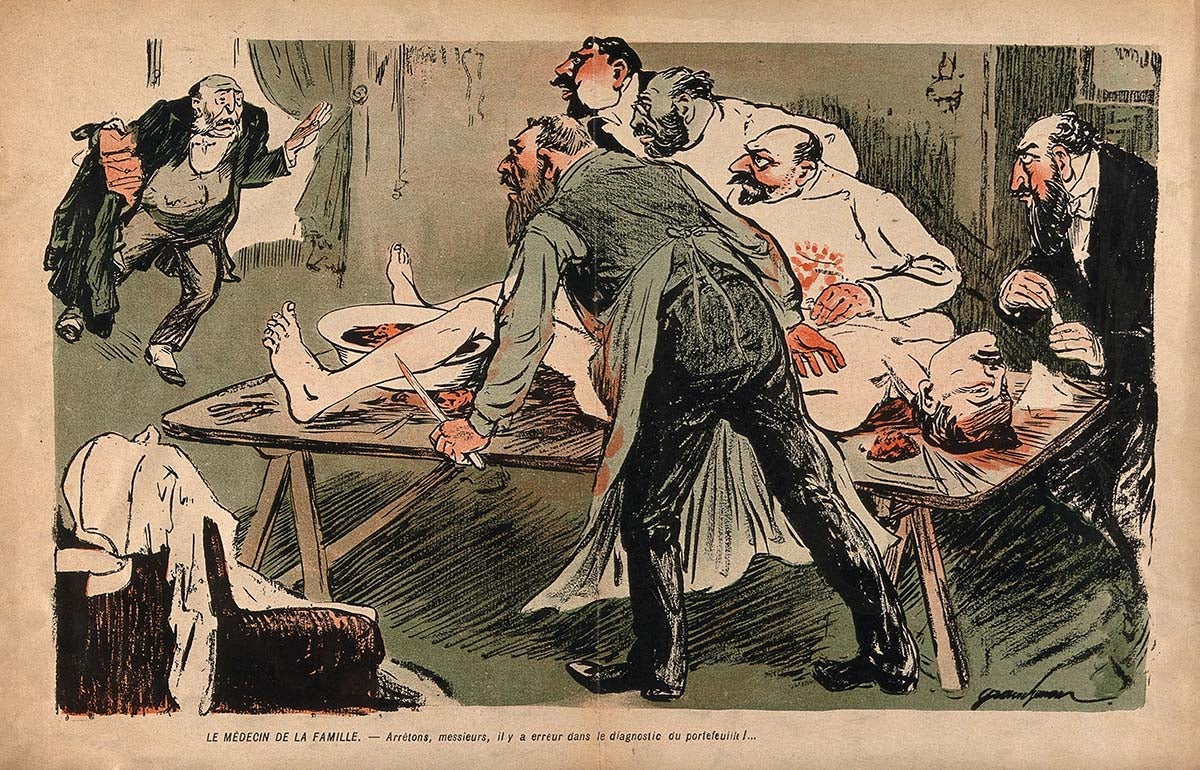 A physician rushes into an operating theatre, exclaiming that there has been an error in diagnosis; unfortunately, the patient is already lying there, opened up. Colour photomechanical reproduction of a lithograph, c. 1900. (Image: The Wellcome Collection)

Some other things haven’t changed, either. The rich and royal have always had access to the best medical care available, and that remains as true today as it was in 1853, when a pregnant Queen Victoria gingerly availed herself of a cutting-edge new anaesthetic: chloroform. At the time, anaesthesia was known as “Yankee humbug” in England and dismissed as a scam used only by surgeons who lacked the speed and skill to operate quickly. However, the Queen—who famously dreaded childbirth and suffered from severe post-natal depression following the birth of each baby—was desperate for relief, and opted to try the experimental new method.

Fifteen drops and a handkerchief to the nose later, she awoke raving about “that blessed chloroform, soothing and delightful beyond measure” that had been administered by (a very nervous) Dr John Snow. News of the queen’s experience, spread across Europe, and women began demanding the same treatment—known as anesthésie à la reine, the Queen’s anaesthesia.

This marked the beginning of a gradual sea change in the practice of surgery as a whole. The advent and widespread adoption of anaesthesia meant that surgeons no longer had to race against the clock, and were now able to take their time while treating patients. The heroics of earlier surgeons who sliced and diced as needed while their patients had only whiskey (if that) to numb the pain were rendered unnecessary, and relegated to the annals of historical barbarism. Thanks to the efforts and sacrifices of these people and so many others left unnamed, the butchering art slowly but definitely became a precision science. 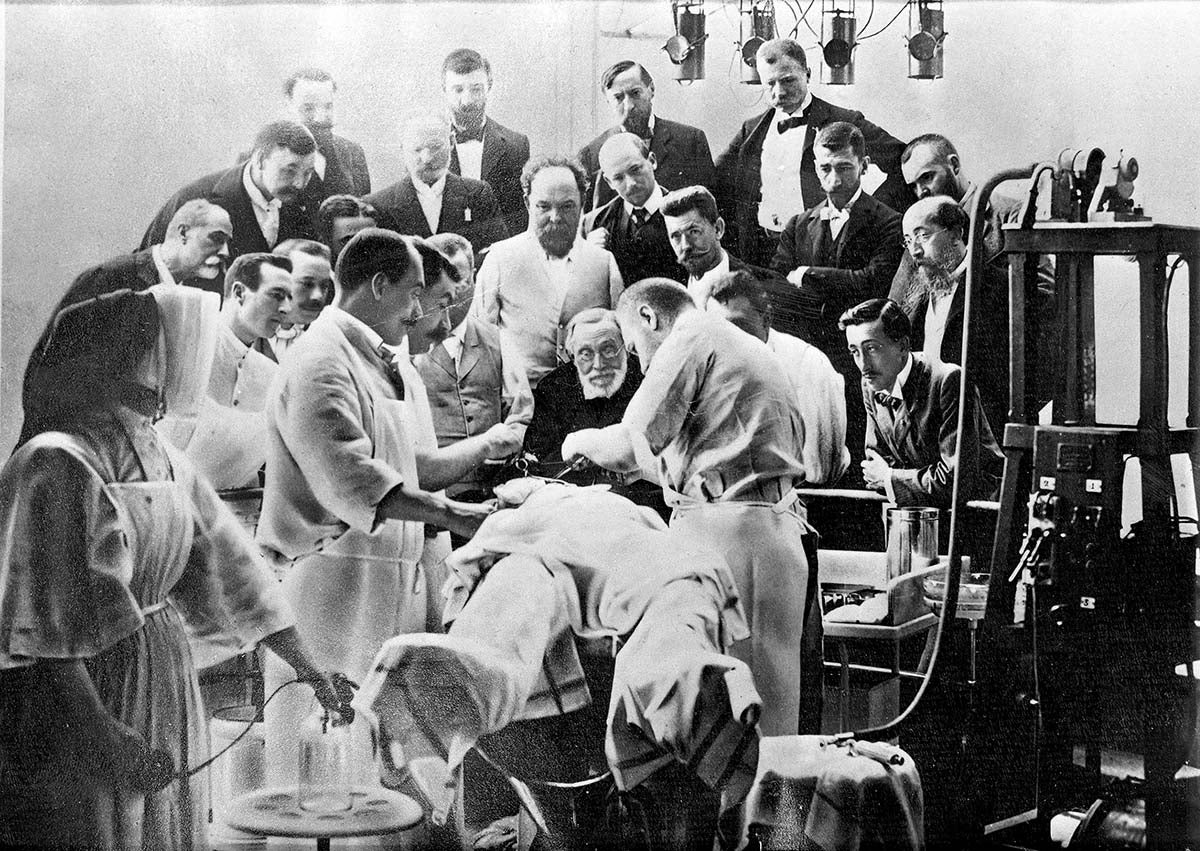 Rudolf Virchow observing an operation on the skull in a Paris Clinic, Historischer Bilderdienst, Berli, 1900. (Image: The Wellcome Collection)