Holy Crap, the Moon Was Struck by a Meteorite During the ‘Super Wolf Blood Moon’ Eclipse

If at first you don’t succeed, try and try again. Such is the philosophy of Jose Maria Madiedo, an astronomer at the University of Huelva in Spain, who, for over 10 years, has tried to capture a meteorite hitting the Moon during a lunar eclipse. On Monday, during the so-called “Super Blood Wolf Blood Moon,” it finally happened.

Monday’s much anticipated Super Blood Wolf Moon eclipse, though badly named, did not disappoint. Millions of people gazed into the night sky or onto video feeds to see a stunning coppery-red hue envelop our planet’s natural satellite. As the January 21 eclipse unfolded, however, some observers noticed a tiny flash while watching the online broadcasts, reported New Scientist. Some suspected the flash was caused by a meteorite strike – and it turns out they were right. 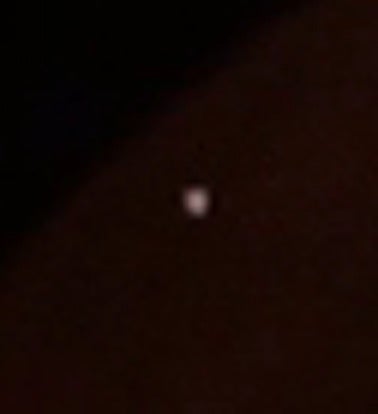 A close-up of the impact flash. Image: Jose M. Madiedo/MIDAS

Jose Madiedo confirmed these suspicions, tweeting that a lunar impact occurred at 5:41am Spanish Peninsular Time. A photograph released by Madiedo clearly showed a yellowish-white dot appearing in the darkened top left quadrant of the Moon during the totality phase of the eclipse. Astronomers have filmed impact flashes on the Moon before, but this marks the first time a lunar impact was captured during a lunar eclipse – an achievement more than 20 years in the making.

Astronomers first started to systematically monitor impact flashes in 1997, an effort that evolved into the Moon Impacts Detection and Analysis System, or MIDAS, a survey conducted by the University of Huelva and the Institute of Astrophysics of Andalucia. Madiedo joined the project in 2008. Using astronomical data from multiple observatories, MIDAS uses software to identify the moment a meteorite hits the darkened portions of the lunar surface.

“We monitor the nocturnal region of the Moon to identify impact flashes. In this way, these flashes are well contrasted against the darker background,” Madiedo explained to Gizmodo. “So, we usually monitor the Moon about five days after the New Moon, and around five days before the New Moon. We also monitor during lunar eclipses, since during these eclipses the lunar ground is dark.”

The telescopes used by MIDAS are equipped with high-sensitivity video cameras and record video continuously during the observing session. These videos are then analysed by software, which automatically identifies lunar impact flashes and calculates their position on the Moon. Madiedo said the system can detect the moment of an impact flash to an accuracy of about 0.001 seconds. Since 2015, the team has applied photometric filters to some of their telescopes, allowing them to determine the temperature of these flashes.

As noted, MIDAS has never captured a meteorite strike during a total lunar eclipse – but it wasn’t for lack of trying. Madiedo said he doesn’t know the exact number of eclipses MIDAS has monitored to date, but, weather permitting, he said every lunar eclipse has been monitored since the survey started. Other groups have also tried to detect lunar flashes during an eclipse, said Madiedo, but none succeeded – until now.

“When the automatic detection software notified me of a bright flash, I jumped out of my chair.”

Normally, Madiedo’s team uses four telescopes to monitor the Moon, but this time they decided to use eight. Considerable work was required to both set up and test the new instruments.

“In total I spent almost two days without sleeping, including the monitoring time during the eclipse,” Madiedo told Gizmodo. “But I made the extra effort to prepare the new telescopes because I had the feeling that this time would be ‘the time,’ and I did not want to miss an impact flash. One instrument had a technical issue and failed. I was exhausted when the eclipse ended – but when the automatic detection software notified me of a bright flash, I jumped out of my chair. It was a very exciting moment because I knew such a thing had never been recorded before.”

Madiedo said the odds of an impact flash of this magnitude is around once every seven to 10 days. His team hasn’t analysed all the data yet, but a preliminary guess is that the object, likely a tiny asteroid, had a mass around 22 pounds (10 kilograms).

By studying these flashes, scientists can acquire better statistics about the rate of lunar impacts, and by consequence the rate at which the Earth’s atmosphere is pelted by similarly sized objects.

On a related note, a recent study suggested the rate of big asteroid impacts on Earth increased around 290 million years ago. This conclusion was reached by studying the history of impact craters on the lunar surface. Our Moon may look nothing like Earth, but when it comes to celestial impacts, we have a shared history. [New Scientist]