Denisova cave in southern Siberia was home to Neanderthals and Denisovans for thousands of years, but questions remain about the timing of their stay. A pair of new studies traces the history of archaic human occupation at the site, showing who lived there and when—including a possible era during which the two now-extinct species hung out together. Archaeologists and palaeontologists have carefully sifted through Denisova cave for the past 40 years, pulling out various animal and Neanderthal bones. But the real bombshell came in 2010 with the discovery of a finger bone from previously unknown human species, the so-called Denisovans. Genetic analysis suggests the Denisovans were a related species to the Neanderthals, but pretty much everything else about them remains a mystery, such as when they first appeared on the scene and when they died out.

Denisova cave, located at the foot of the Altai mountains in southern Siberia, is thus a critical resource for improving our understanding of not just the Denisovans, but the Neanderthals as well. And possibly our own species, Homo sapiens—though the cave, perhaps strangely, hasn’t yielded a single shred of evidence showing that anatomically modern humans ever lived in there. For Neanderthals and Denisovans, however, Denisova cave served as an important refuge for vast swaths of time.

Vast swaths of time, indeed. We’re not talking about a thousand years here or a thousand years there. Rather, we’re talking about hundreds of thousands of years of occupation. Compiling a timeline of events, such as when the cave was first occupied and by whom, has proven tough, in part due to the large size of the cave and its complex layers of sediment; the cave’s stratigraphy encompasses both the Siberian Middle Paleolithic period (between 340,000 and 45,000 years ago) and the Initial Upper Paleolithic period (roughly 45,000 to 40,000 years ago).

Scientists have also been confronted with the limits of radiocarbon dating, which can only go back 50,000 years. The cave has been inhabited for much longer than that, requiring the use of less reliable dating methods, and by consequence, the positing of unconvincing or controversial timelines.

To overcome these hurdles and limitations, a multidisciplinary team of researchers from around the world, including from Russia, the UK, Australia, Germany, and Canada, spent the past five years analysing bones and artefacts found in Denisova cave. The researchers used multiple dating techniques, both well-established and cutting-edge, and statistical techniques to date thousands of items at the site, allowing them to piece together the most accurate and detailed timeline to date of human occupation at Denisova cave.

The first study, led by Zenobia Jacobs and Richard Roberts of the University of Wollongong in Australia, presented new dates for Denisova cave sediment deposits. To date these deposits, and by consequence the bones and artefacts within, the researchers used a relatively new technique called stimulated luminescence, in which scientists can tell the last time a mineral grain, such as quartz, was exposed to sunlight. Dates were provided for 103 sediment deposits spanning 280,000 years of history in the cave.

Results from this work showed that Denisovans first occupied the cave around 287,000 years ago, and continued to live in the cave until around 55,000 years ago. Neanderthals arrived at the cave around 193,000 years ago, and they continued to live there up until around 97,000 years ago—an overlap of 96,000 years. The bones of 27 animals, including mammals and fishes, along with 72 species of plants, were also analysed, pointing to a variable climate in the region during the millennia of occupation at the cave. At times, the region was relatively warm, featuring forests of broad-leaved trees, but at other times it was a harsh and desolate tundra-steppe habitat.

A major implication of the Jacobs and Roberts study is the suggestion that Denisovans and Neanderthals hunkered down in the cave together. Now, it’s possible the two species didn’t share the space concurrently, but recent evidence suggests they probably did. In an astounding find from last year, a group of scientists, some of whom are co-authors of this new study, uncovered genetic evidence of a hybrid archaic hominin, dubbed Denisova II, who lived in the cave 90,000 years ago—a girl with a Denisovan dad and a Neanderthal mum. This evidence, along with other lines of research, suggests the two species interbred regularly, and that this wasn’t just an isolated case.

The second study, led by Katerina Douka from the Max Planck Institute for the Science of Human History in Germany, offered new dates for Neanderthal and Denisovan fossils, along with tooth pendants and bone points found at the site. Douka’s team used multiple techniques to indirectly and directly date thousands of bone fragments and artefacts, including radiocarbon dating and uranium-series dating, both of which take advantage of known rates of radioactive decay.

“This is the first time we are able to confidently assign an age to all archaeological sequence of the cave and its contents,” Tom Higham, an archaeologist at the University of Oxford and a co-author of the new study, said in a statement.

“There is considerable uncertainty in some the estimates... however these results help to establish the likely pattern of use over time.”

“The Douka paper is exciting because we knew that Neanderthals and Denisovans both used the Denisova cave, and that the two groups interbred in or near there, but we didn’t know much about the length of time that each group frequented the cave or the length of time that the two groups overlapped in using the cave,” Sharon Browning, a research professor in the Department of Biostatistics at the University of Washington who wasn’t involved in the new study, told Gizmodo.

Many of the dates provided in the Douka paper had large margins of error, a consequence of complex stratigraphy (e.g. concerns that some items drifted to lower stratigraphic layers) and an unwillingness to go beyond the available data. But while there is “considerable uncertainty in some the estimates, and the possibility of visits from either group that were earlier or later but didn’t leave a detected trace,” Browning said these results still “help to establish the likely pattern of use over time.” 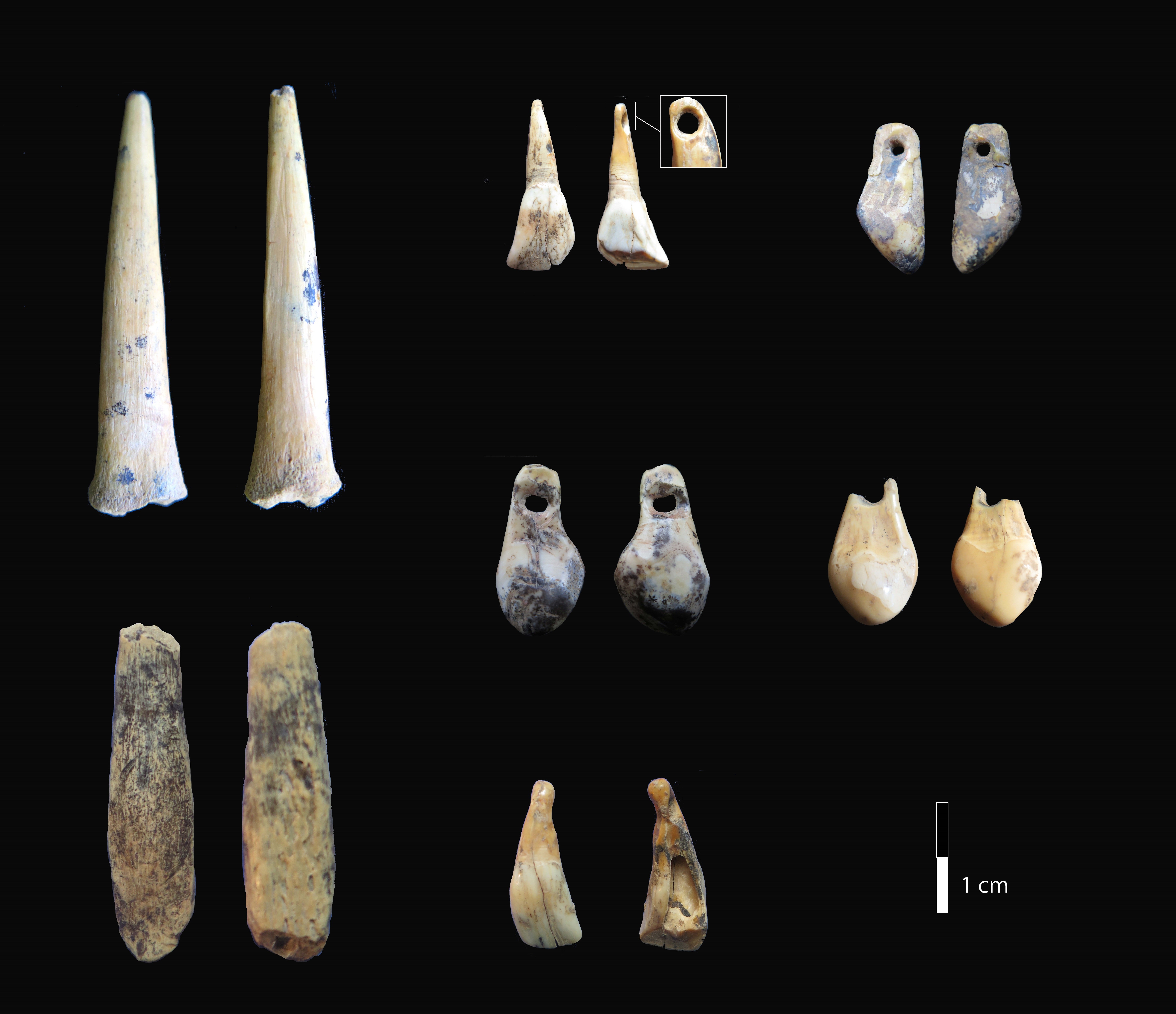 The artefacts found at the site, such as bone points, pierced teeth, and pendants, were dated to between 49,000 and 43,000 years ago, and they’re now the oldest artefacts ever uncovered in northern Eurasia, according to the Douka paper. Trouble is, these dates are thousands of years after the last evidence of human occupation appears at the cave.

“On the basis of current archaeological evidence, it may be assumed that these artefacts are associated with the Denisovan population,” the authors surmised in the study. “It is not currently possible to determine whether anatomically modern humans were involved in their production, as modern-human fossil and genetic evidence of such antiquity has not yet been identified in the Altai region.”

Denisovans were the likely manufacturers of these items because it’s the simplest explanation, given that Neanderthals were long gone from the cave by then, and no evidence of modern humans exists at the cave, according to the new research. But anthropologist Chris Stringer from Britain's Natural History Museum isn’t convinced these items belonged to the Denisovans.

A pendant being sampled. (Image: Tom Higham, University of Oxford)

“My money would be on early modern humans, who can be mapped elsewhere at this date, for example at Ust’-Ishim in Siberia, but the authors of the Douka paper rather surprisingly argue that it’s most parsimonious to assume that Denisovans were responsible, even though no Denisovans are yet known as late as that in the sequence,” Stringer told Gizmodo. “Only more discoveries and more research can resolve that question satisfactorily.”

Stringer said he liked the two new studies, saying they “bring the latest dating techniques to bear on the stratigraphy, palaeoclimatic records, and the human fossils,” but he said many unresolved issues remain. There’s the possibility, for example, that some, if not all, of the bones were dragged into the cave by carnivores who hunted humans, he said, or that the bones shifted dramatically over the years from their original resting place, throwing off the dating to a considerably degree.

“But at face value it looks like the Denisovans can be placed at least intermittently at the site for about 250,000 years, from close to 300,000 years ago through to about 50,000 years ago, with the Neanderthals also there for periods in-between,” said Stringer. “The occupations seem to concentrate in the warmer periods, reinforcing the view that Denisova cave was probably at the northern limits of occupation for both of these populations. The fact that Neanderthals and Denisovans were both present at times greatly complicates disentangling which humans were responsible for which elements of the archaeology—perhaps sediment DNA studies will eventually help to better map their presence in the cave.”

These uncertainties and the large margins of errors are undeniably frustrating, but these two papers are helping to clear away much of the ambiguity. As time passes, we’re steadily gaining a clearer picture of archaic human occupation at Denisova cave. And damn, is it ever fascinating. [Nature, Nature]