On 24 December 1968, Apollo 8 astronauts William Anders, Jim Lovell, and Frank Borman reached lunar orbit, allowing them to become the first humans in history to witness an Earthrise. The images captured that day, showing our planet in context with the lunar landscape, remain among the most enduring photos taken during the Apollo programme—and human history for that matter.

It was during their fourth orbit around the Moon that the iconic photograph was captured.

“Oh my God, look at that picture over there!” exclaimed Anders. “There’s the Earth comin’ up. Wow, is that pretty!” 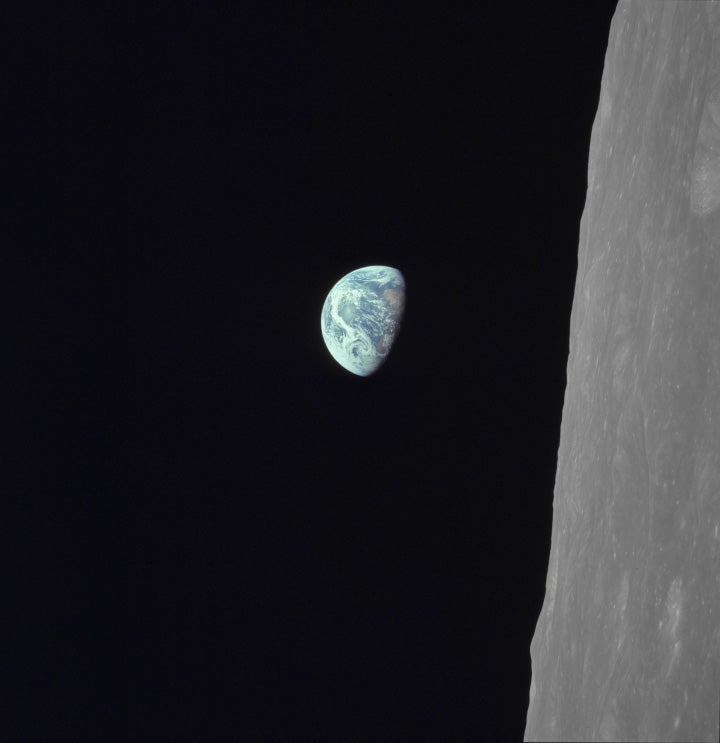 Grabbing his camera, Anders captured the scene. Today, the Earthrise photo is often oriented to show the Earth above a horizontal plane, but the photo was actually taken via the vertical plane (as shown here). Looking at the photo, you can see the sunset line extending across Africa and Antarctica, while North and South America is heavily shrouded by clouds. 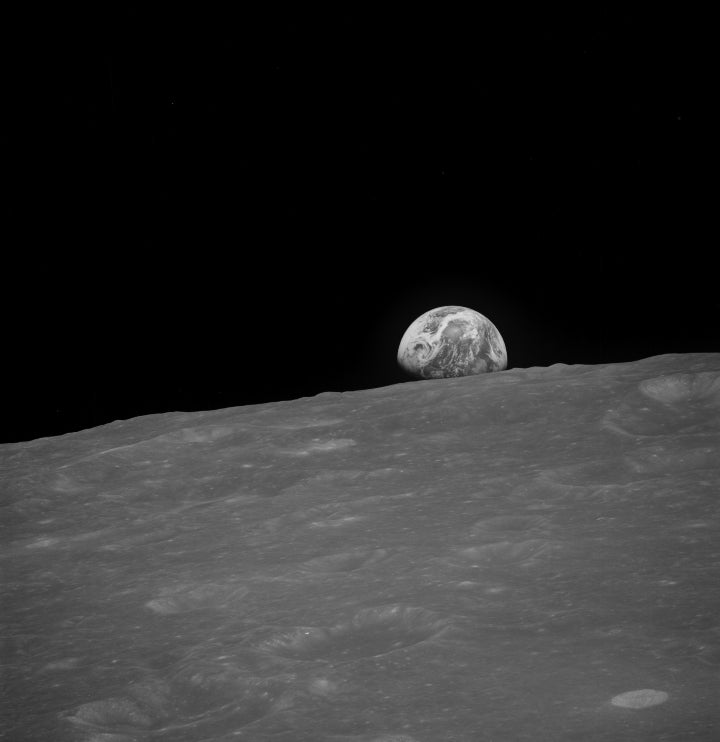 A black-and-white photo of the Earthrise was taken on the same day, showing the Earth rising over a horizontally oriented surface. The photo, likely taken by Anders, was captured when the Apollo 8 capsule was at 100 degrees east lunar longitude, showing a lunar horizon line that extends for about 250 miles (570 kilometres).

Back on Earth, an estimated half a billion people tuned into the Christmas Eve broadcast—the largest television audience up to that point.

“We were told that on Christmas Eve we would have the largest audience that had ever listened to a human voice,” said Borman at a 2008 Apollo anniversary event. “And the only instructions that we got from NASA was to do something appropriate.”

Lovell said the “vast loneliness” he felt while circling the Moon was “awe inspiring,” and that it made him “realise just what you have back there on Earth.” He described his home planet as a “grand oasis to the big vastness of space.”

Looking the Moon, Borman was struck by its dead and lifeless appearance.

“The Moon is a different thing to each one of us. I think that each one of us—each one carries his own impression of what he’s seen today,” said Borman. “I know my own impression is that it’s a vast, lonely forbidding type existence, great expanse of nothing, that looks rather like clouds and clouds of pumice stone, and it certainly would not appear to be a very inviting place to live or work.”

The following day—Christmas Day 1968—the Apollo 8 crew departed lunar orbit and headed back home. Lovell confirmed the successful firing of the engines by telling mission control, “Please be informed there is a Santa Claus.”

"But despite the vast distance that made the photograph possible, we had not lost our connection with the natural world, we had rediscovered it. We saw, for the first time, our one home together in the cosmos." - Sir David Attenborough #Apollo8 #Apollo50 #IdeasThatDefy pic.twitter.com/2MBWuaxQEs

50 years later, it’s easy to take these photos for granted, but they were the first to show our planet in context with another celestial body. Many photos have been taken of the Earth and Moon since then, but there’s something special about the original Earthrise photo—an image that continues to inspire, give hope, and put our place in the cosmos into perspective. [NASA Earth Observatory]