While inspecting a known globular cluster, a team of astronomers began to notice that some of its stars didn’t seem to belong. Investigating further, they realised the anomalous stars were part of a nearby galaxy—one previously unknown to us.

One moment you’re investigating a globular cluster, and the next you’re unexpectedly writing a research paper about something else entirely, namely the discovery of previously unknown dwarf spheroidal galaxy. But that’s how it goes sometimes, and the authors of the new study, published this week in the Monthly Notices of the Royal Astronomical Society, couldn’t be happier.

“It was definitely a surprise!” exclaimed Luigi Bedin, an astronomer at INAF-Osservatorio Astronomico di Padova in Italy and the lead author of the new study. “We knew it was something atypical.” 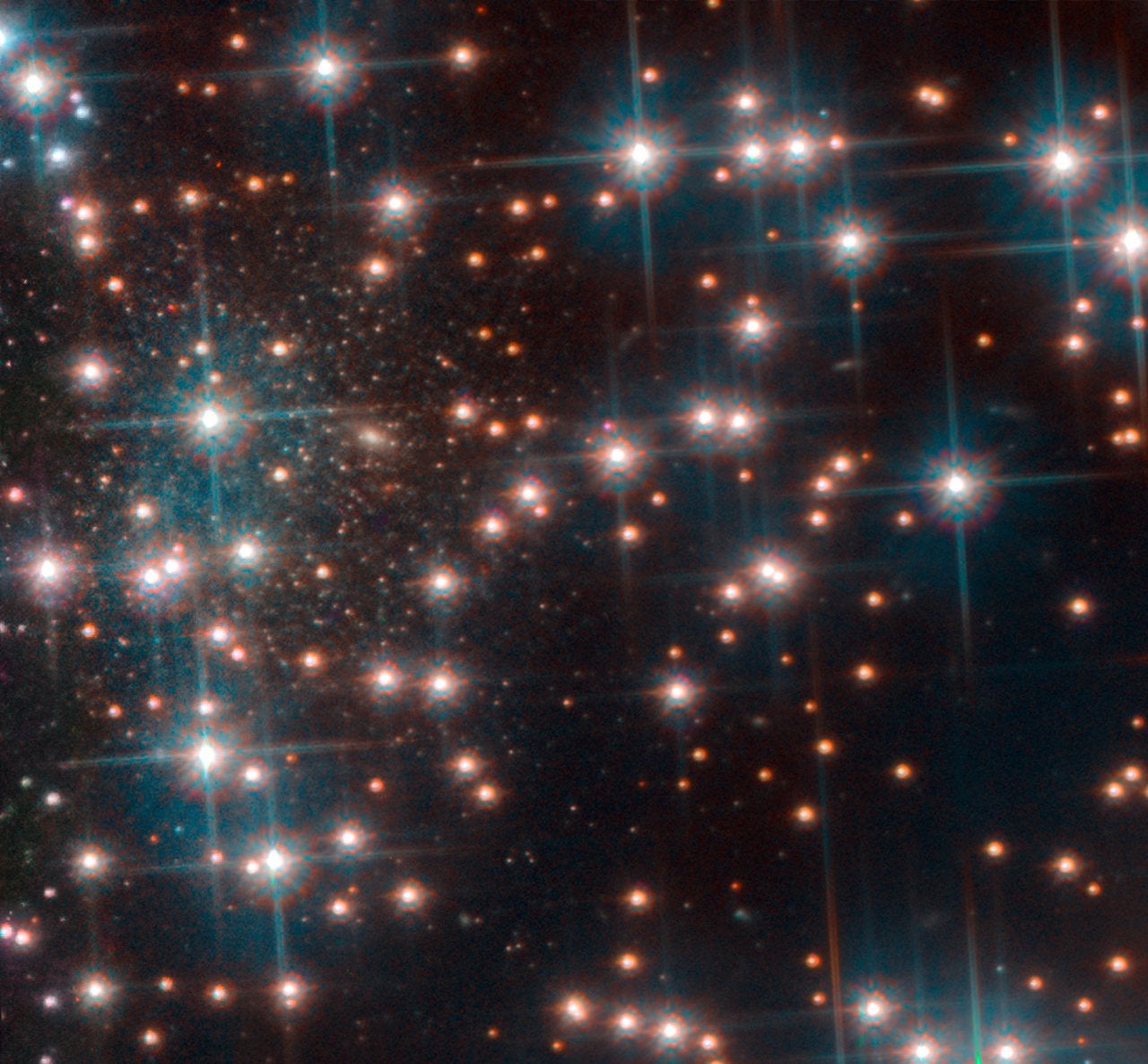 The cluster of small stars along the left of this photo is the newly discovered galaxy, Bedin I, while the large stars in the foreground belong to globular cluster NGC 6752. (Image: NASA, ESA, Bedin et al.)

Named Bedin I in honour of its discoverer, the freshly spotted galaxy is definitely not ordinary. It’s freakishly small, dim, and very, very old. And remarkably, it’s sitting right next door, cosmically speaking: At 30 million light-years away, it’s considered part of our Local Group of galaxies. (To give you an idea of scale, the Milky Way itself measures 105,000 light-years across.)

Bedin 1 is located in the Pavo constellation, which is visible in the Northern Hemisphere. The diminutive galaxy hasn’t been detected until now because it’s obscured by NGC 6752, the globular cluster that Bedin’s team was investigating. Specifically, they were analysing white dwarf stars within NGC 6752 to measure the age of the cluster, which is located approximately 17,000 light-years from the centre of the Milky Way. Using the NASA/ESA Hubble Space Telescope, the astronomers began to notice that some stars along the outer fringes of the globular cluster were out of place, leading to the accidental discovery.

“The temperature and luminosity of these stars suggested they were more distant,” Bedin told Gizmodo. “And they were too loose and too far away from other nearby galaxies.”

The astronomers quickly realised they were looking at a previously undetected galaxy—a compact collection of ancient stars measuring 3,000 light-years across and situated 2,300 times further away than globular cluster NGC 6752. Bedin I was classified as a dwarf spheroidal galaxy owing to its small size (it’s about 1/35th the diameter of the Milky Way), low luminosity, lack of dust, and population of old stars. To date, some 36 galaxies of this type have been documented in the Local Group of galaxies, according to a Hubble release about the discovery. 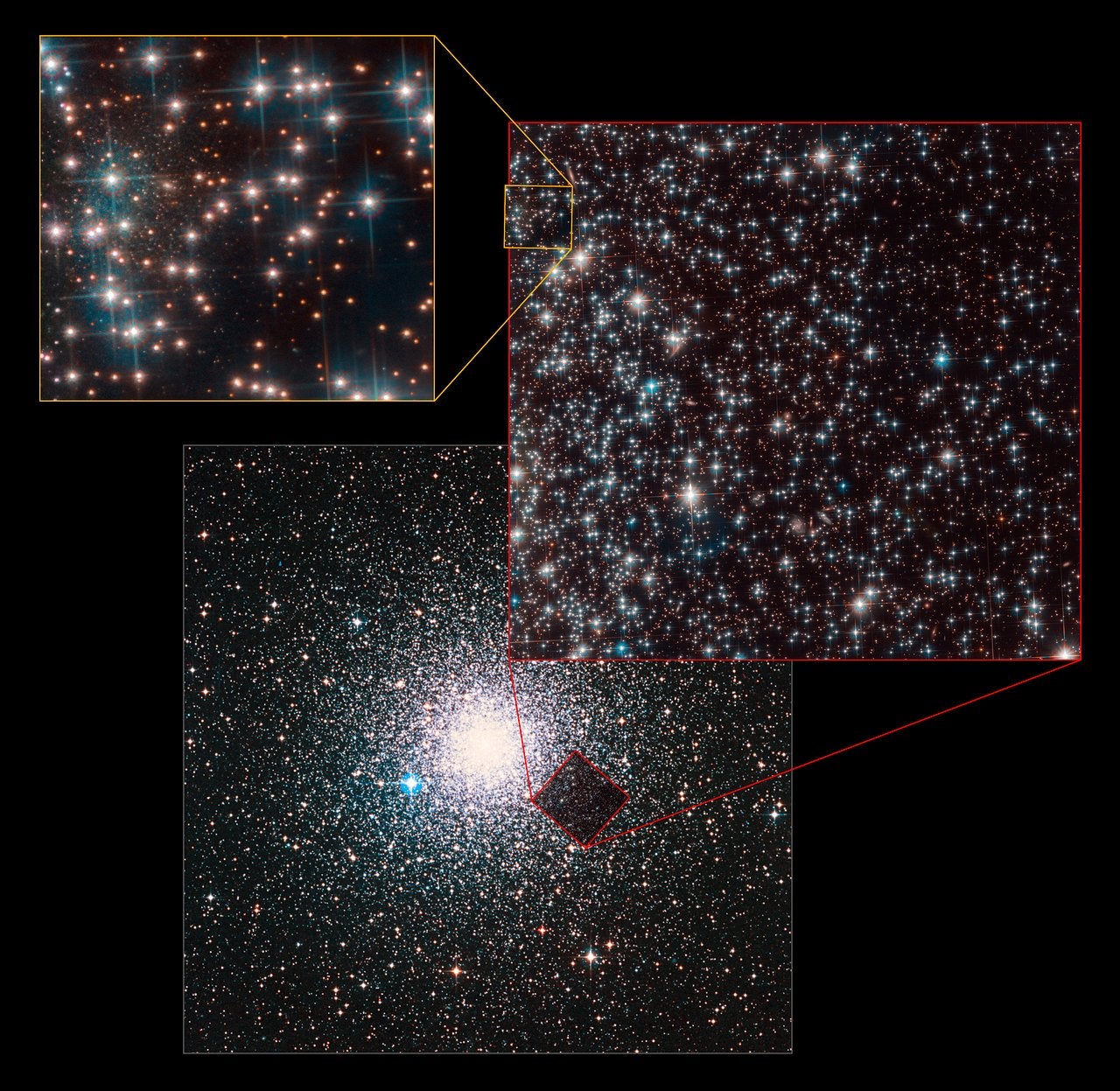 A composite image showing the location of Bedin 1 behind the globular cluster NGC 6752. The lower image depicts the complete cluster, the upper right image shows the full field of view of the area obstructing the dwarf galaxy, and the upper left image zooms in even further to show Bedin 1. (Image: ESA/Hubble, NASA, Bedin et al., Digitized Sky Survey 2)

Bedin I was dated to around 13 billion years old; its oldest stars are no longer burning hydrogen—a tell-tale sign of its extreme age, explained Bedin. This dwarf galaxy formed during the earliest stages of the Universe, so it’s considered a cosmological fossil. Remarkably, it formed during the first hundreds of millions of years after the Big Bang. Its discovery confirms suspicions that some of the Universe’s oldest galaxies are nearby. But as this discovery also shows, they’re rather hard to spot, mostly because they’re so small and dim.

Not only is this dwarf galaxy old, it’s also remarkably isolated and undisturbed. Bedin I has been floating through the cosmos with impunity for billions of years, making it an excellent target for future investigations. The discovery of this isolated galaxy could “put constraints on models of how the galaxy we see today did form,” said Bedin.

As a final note, Bedin said he pleased with the galaxy’s new name, saying it was “nice to adopt a nickname from one of its discoverers instead of an anonymous identification based on its coordinates.” Hard to fault him on that! Those dreadful numerical designations, while utilitarian, are often quite silly. No harm in giving catchy names to cool things, and by consequence, honouring the researchers involved. [Monthly Notices of the Royal Astronomical Society]