Some forms of brain surgery require patients to be awake and responsive—a rather unsettling proposition for even the bravest among us. Neuroscientists have now devised an ingenious way of reducing fear and anxiety during these delicate procedures by electrically stimulating a part of the brain that triggers laughter and good feelings.

A distinct pathway in the white matter part of the brain known as the cingulum bundle can be used to alleviate stress and anxiety during awake brain surgery, according to new research published Monday in The Journal of Clinical Investigation. When electrically stimulated, this pathway triggers instantaneous laughter in the patient. But unlike previous experiments, this laughter was also accompanied by positive, uplifting feelings. Preliminary research suggests this technique could be used to calm patients during awake brain surgery, with the authors of the new study, led by neuroscientist Kelly Bijanki from Emory University School of Medicine, saying the findings could also lead to innovative new treatments for depression, anxiety, and chronic pain.

Bijanki, with the help of Emory neurosurgeon Jon T. Willie, electrically stimulated the cingulum bundle of three epilepsy patients as they were undergoing preliminary diagnostic monitoring prior to brain surgery. All patients exhibited similar responses, including laughter, smiling, elevated mood, and pain relief—basically, mild euphoria. The technique was later used on one of these patients during actual brain surgery, to positive results.

Video showing the patient’s reaction during the diagnostic stage of the procedure. Don’t worry, it’s not graphic—and it’s hard to not smile along with her. (Credit: Journal of Clinical Investigation)

Performing brain surgery on patients who are awake is not ideal, but it’s very necessary in some situations. Certain brain areas have specific functions that cannot be determined by just looking at them. When treating epilepsy or brain tumours, surgeons sometimes need to remove parts of the brain, but it’s not easy to distinguish abnormal tissue from important, functional tissue. In order to map the important parts, patients must be awake and cooperative so that doctors can distinguish between the parts that can be removed from those that can’t. In the case here, the surgeons needed to remove tissue that was overlapping with language function. By keeping the patient awake and responsive, the surgeons were able to avoid the important language parts of her brain while removing the parts responsible for her seizures.

During surgery, patients don’t feel any pain in their brains, though the skin and surrounding tissues can be sensitive. That said, being awake during this form of surgery is understandably stress-inducing. Most patients are at least somewhat anxious about being awake; they fear experiencing pain or the feeling of being out of control, explained Willie. Some patients also start to panic, and if they can’t be calmed down they risk serious injury as their skulls are open and brain exposed. When this happens, surgeons sometimes have to abort the procedure, preventing them from removing the problem area in the brain. As an experienced neurosurgeon, Willie has seen this for himself. 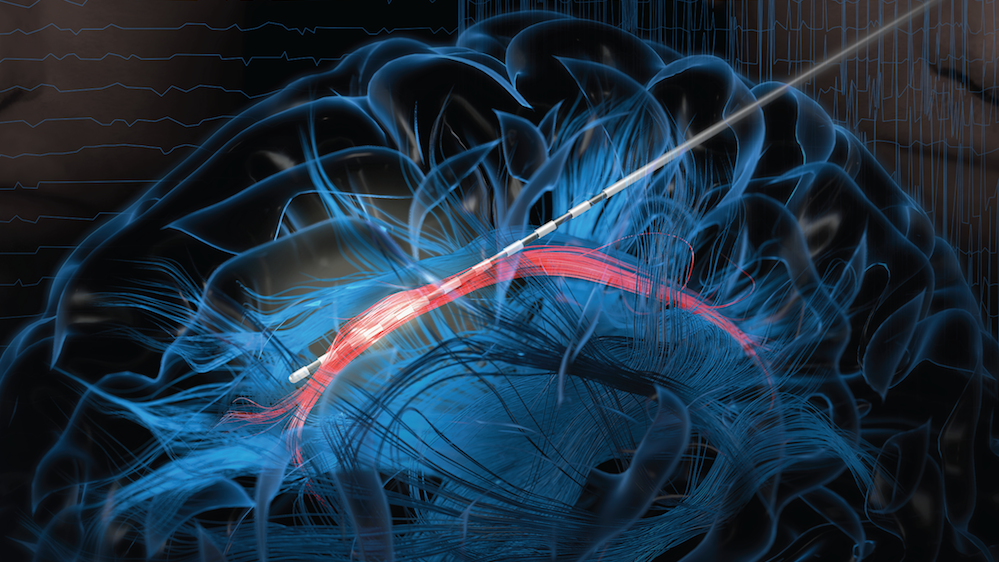 Illustration showing how an electrode was inserted into the cingulum bundle. (Image: Courtesy of American Society for Clinical Investigation)

“During my training, I helped perform an attempted awake surgery on a medical student who developed a malignant brain tumour of his left frontal lobe where speech is produced,” he told Gizmodo. “Despite a high level of education and insight, and despite adequate preparation for the operating room, when he woke up from the initial anaesthesia required for the first stage of the operation—opening his cranium and exposing the brain—he panicked and reacted so violently that he pulled his head loose from the skull pins meant to keep his head stable. The operation became unsafe because he would not remain still, we had to put him back to sleep, and then we were only able to safely remove part of the tumour because we lost the ability to map the border between critical language function and the tumour.”

Willie said “every surgeon” he knows who routinely performs awake neurosurgery can convey similar experiences. The results of his team’s new paper, he said, point to an “alternative to sedating drugs to help patients with anxiety tolerate awake brain surgery when it is necessary.”

The key to this strategy is the white matter pathway known as the cingulum bundle, which acts like a highway, connecting multiple structures from the front to the back of the brain using a series of structures that act like on-ramps and off-ramps along its length. The front part is particularly important in that it’s associated with emotion, social interaction, self-assessment, and motivation.

The patient during surgery. (Credit: Journal of Clinical Investigation)

“Accessing the ‘highway’ in a particular location with direct stimulation provides a way of modulating specific brain areas with related functions and using that part of the highway to modify certain behavioural, emotional, or cognitive states to help patients feel more relaxed or motivated to persevere in the face of adversity,” said Willie.

Previously, scientists have shown that some parts of the brain (e.g. anterior cingulate cortex) can trigger spontaneous laughter when stimulated, but without the expected positive emotional state. These efforts produced the mechanical aspects of smiling and laughing, but not much beyond that in terms of inducing positive feelings. The new study is different in that positive feelings were induced in the patients, a consequence of stimulating the cingulum bundle.

When the electrodes were in place, the researchers, in addition to inducing laughter, also tested the patients’ moods and thought processes. As the authors wrote in the study, the stimulation “immediately elicited mirthful behaviour, including smiling and laughing, and reports of positive emotional experience.” The experiences were described as “pleasant and relaxing and completely unlike any component of [their] typical seizure or aura,” the authors wrote. Patients “reported an involuntary urge to laugh that began at the onset of stimulation and evolved into a pleasant, relaxed feeling over the course of a few seconds of stimulation.” In fact, the young female patient shown in the provided videos said, “This is awesome, everyone should have this!”

This marks the first time that this sort of stimulation has been used to counteract the stress of awake surgery, according to Willie. The alternative would have been to give the patients sedating medications, which can interfere with their ability to participate in awake surgery and help with the brain mapping.

To an observer, the patients appeared as if they were high on drugs, suddenly contracting a serious case of the sillies. Cognitive tests and a mental status exam, however, suggested the patients weren’t impaired and that they were able to function normally.

“The most important thing we learned in this study is that a very small area of the brain may be reproducibly targeted to elicit happiness and relaxation,” said Willie. “While we used direct electrical stimulation with surgically placed electrodes in this study, we hope that this will ultimately lead to less invasive approaches to treat this and related brain areas.”

The electrodes used for the intervention were eventually removed, with nothing left behind. The concept was deemed a success, but ideally, the researchers hope that something less invasive will eventually be developed. Until then, deep brain stimulation (DBS) can be used as a relatively safe, effective, and tolerable therapy, they said.

“Direct electrical stimulation with implanted electrodes is currently used for DBS, but the future promises the development of ways to produce focal brain modulation with less invasive techniques that use beams of electricity, light, or ultrasound energy or even gene therapy to activate or disrupt focal brain functions for therapeutic benefit,” said Willie. “Many of these are not yet practical or proven as effective in humans, but some have already been demonstrated to reach more superficial brain areas,” he said, adding that “noninvasive transcranial magnetic stimulation of the superficial frontal lobe, for instance, is already being used by psychiatrists to treat some forms of depression with promising early results.”

For some, the prospect of triggering uncontrollable physical reactions and emotional states might seem a bit disturbing. Indeed, this research introduces a host of philosophical issues, including those involving free will and the reducibility of human cognition to specific brain states. Ryan McVeigh, assistant professor of sociology at Lakehead University in Orillia, Ontario, Canada, said this research shouldn’t be cause for existential concern.

“At its core, these experiments posit a link between qualitative experience and neural activity. There’s actually nothing concerning or novel about that,” McVeigh told Gizmodo. “In fact, the average person likely assumes such a connection exists whenever they watch a funny movie, take a funny drug, or engage in funny behaviour; something happens in their brain that connects with what they feel experientially.”

Any fear that one’s free will is negated by this process, he said, can be easily dispelled.

“The exact same reaction would have occurred if the researchers had simply tickled the patients,” said McVeigh. “We can no more stop laughing if we’re ticklish than these patients could from having a specific region of their brain stimulated. If that means we don’t have free will, then we never did.” [The Journal of Clinical Investigation]