Giant Tortoise Feared Extinct Rediscovered in the Galápagos After 113 Years

A species of large tortoise not seen since 1906 has been rediscovered on a remote part of the Galápagos Islands, kindling efforts to conserve the critically endangered animal.

She’s extremely old and a bit underweight, but she’s very much alive.

The species to which she belongs, the Fernandina Giant Tortoise (Chelonoidis phantasticus), was listed by the International Union for Conservation of Nature as being “critically endangered and possibly extinct,” but we now know only one of those two claims is correct.

An adult female estimated to be more than 100 years old was spotted this past Sunday, 17 February, on Fernandina, the third largest of the Galápagos Islands, reports the Associated Press. Galápagos National Park and Galápagos Conservancy took part in the expedition to relocate the tortoise, as did Animal Planet, which funded the search. Forrest Galante, a biologist and host of the Animal Planet show Extinct or Alive, took part in the joint expedition, and was assisted by two scientists, including a Galápagos National Park Ranger.

A Fernandina tortoise, presumed to be extinct since 1906, has been FOUND! She was discovered in an expedition for #ExtinctorAlive by @ForrestGalante. This tortoise was hiding in the brush of a volcano in the Galapagos and was identified by the look of her shell and face. pic.twitter.com/R4a2YOdI8j

A Fernandina Giant Tortoise hadn’t been seen since a dead male was found in 1906, leading to fears the species had gone extinct. Fernandina Island features an active volcano named La Cumbre, and conservationists feared the species had completely collapsed due to the frequent lava flows that cover most of the island.

“The reason no sightings have been made is that Fernandina is an extremely sparse, remote, and harsh environment, more or less completely inaccessible to most people,” Galante told Gizmodo. “Additionally, no one from the Galápagos national parks really believed in its existence so no resources were put forward to look for the animal. Fortunately, myself and the two scientists I went with still held out hope, and that led to the finding of a super small isolated patch of suitable habitat and eventually the animal.”

Galante and his crew had spent two days surveying the island, and the team crossed a 3-mile stretch of a solidified lava flow to reach an area previously identified as a suitable habitat for the tortoise.

“The tortoise was found sheltering from the equatorial sun, buried deep under a pile of brush,” according to a statement Animal Planet sent to Gizmodo. “A huge celebration ensued as all parties involved were able to positively identify the animal in question as an older female C. Phantasticus based on shell morphology and facial characteristics.” 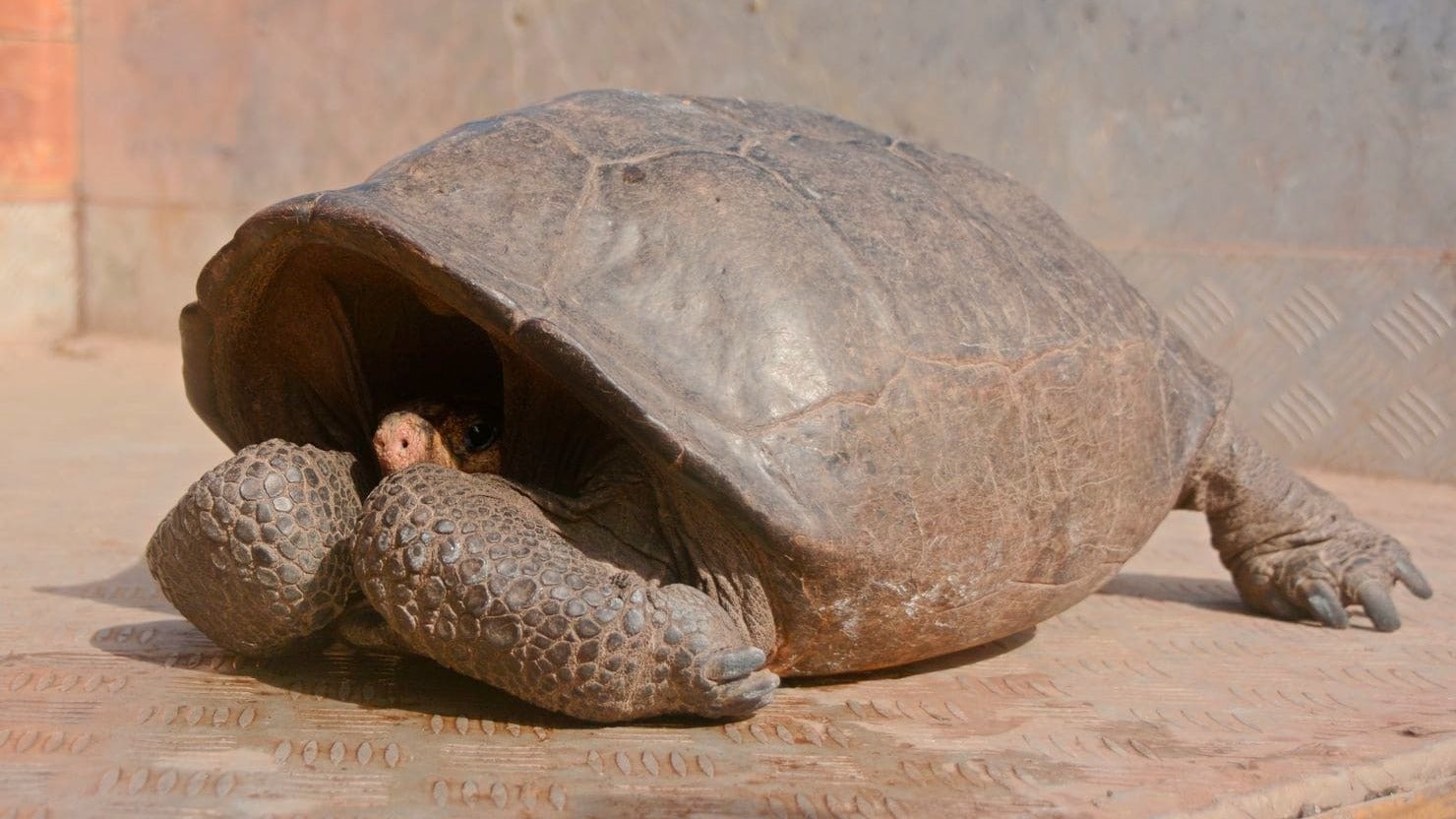 Described as being in “good health” but “underweight,” the tortoise was living in a volcanic area with sparse vegetation. She’s about half to two-thirds the size of the dead male found in 1906, according to Anders Rhodin of the Turtle Conservancy and IUCN specialist group, who was quoted in the Animal Planet statement.

The tortoise was relocated to Fausto Llerena Tortoise Breeding Centre, a national park facility on Santa Cruz Island of the Galápagos. She’s now living in a specially designed enclosure. Tortoise conservationists would very much like to find a suitable mate to propagate the critically endangered species, and they’re hopeful, given the discovery of tortoise scat and track marks on Fernandina Island.

“The centre she is at is an excellent facility with a great track record,” Galante told Gizmodo. “Now that we have found the C. Phantasticus and given that signs of a second animal on the island are substantial, a return trip, properly financed with a large number of scientists can take place to locate a male.”

To that end, the Turtle Conservancy and Global Wildlife Conservation are pledging a maximum $100,000 (£77,000) matching donation to fund further conservation efforts. [Associated Press via Washington Post]