Titanosaurs were the giants of the giants—four-legged behemoths that stomped around Cretaceous South America and Africa 100 million years ago. The discovery of a previously unknown titanosaur in Tanzania with a unique heart-shaped tailbone is adding to our knowledge of these enigmatic beasts, and how they lived and evolved on the African continent.

The name of this new titanosaur—Mnyamawamtuka moyowamkia, pronounced “Mm-nya-ma-wah-mm-too-ka mm-oh-yo-wa-mm-key-ah”—means “animal of the Mtuka with a heart-shaped tail” in Swahili, with the Mutka being a dried-up river bed near the cliff along the East African Rift System in southwestern Tanzania where the 100-million-year-old fossilised bones were recovered. And as its name also implies, this Cretaceous creature had a strange heart-shaped tailbone, the function of which isn’t immediately clear to palaeontologists.

Mnyamawamtuka was discovered in 2004, and it took four years for field palaeontologists to complete the required excavation work. Recovered body parts included the backbones, shoulder, and legs, along with remnants of its neck, hip, tail, and arm. Sadly, its skull could not be found. Enough pieces were recovered, however, to allow Eric Gorscak from Midwestern University and Patrick O’Connor from Ohio University, both in the US, to conduct an analysis and compare the dinosaur to similar specimens. Details of their findings were published this week in PLoS ONE, 15 years after the fossils were first discovered. 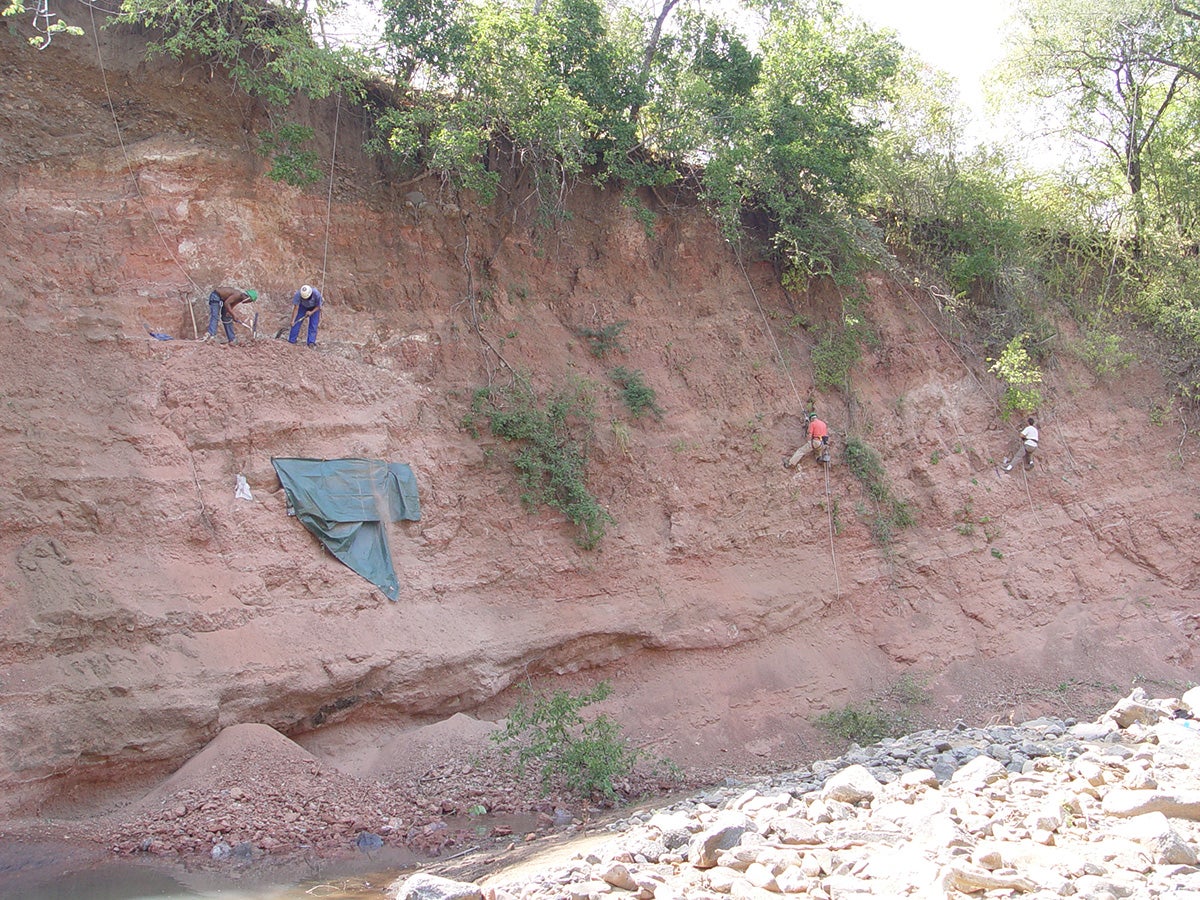 The team at work along the cliff wall in 2007, at the East African Rift System in Tanzania. (Image: Anna Jerve)

“The time it takes to discover, excavate, study, and publish a new dinosaur is a fairly lengthy process and requires a lot of people-hours at various stages,” Gorscak told Gizmodo. “A skeleton with many bones takes a lot of patience to prepare—such as removing any remaining rocks encasing the fossils and fixing any damage—and subsequently study what this animal is and how it relates to other dinosaurs.”

Other important dinosaur discoveries also impeded a timely analysis, including studies of Rukwatitan and Shingopana, two other titanosaurs found in Tanzania. Given the workload, Gorscak and O’Connor had to plan out their priorities for their research focus.

“Also, I would say one of the most overlooked factors is, well, life itself,” added Gorscak. “We palaeontologists have lives too, it’s not just 24/7 fossils for us—but close!” 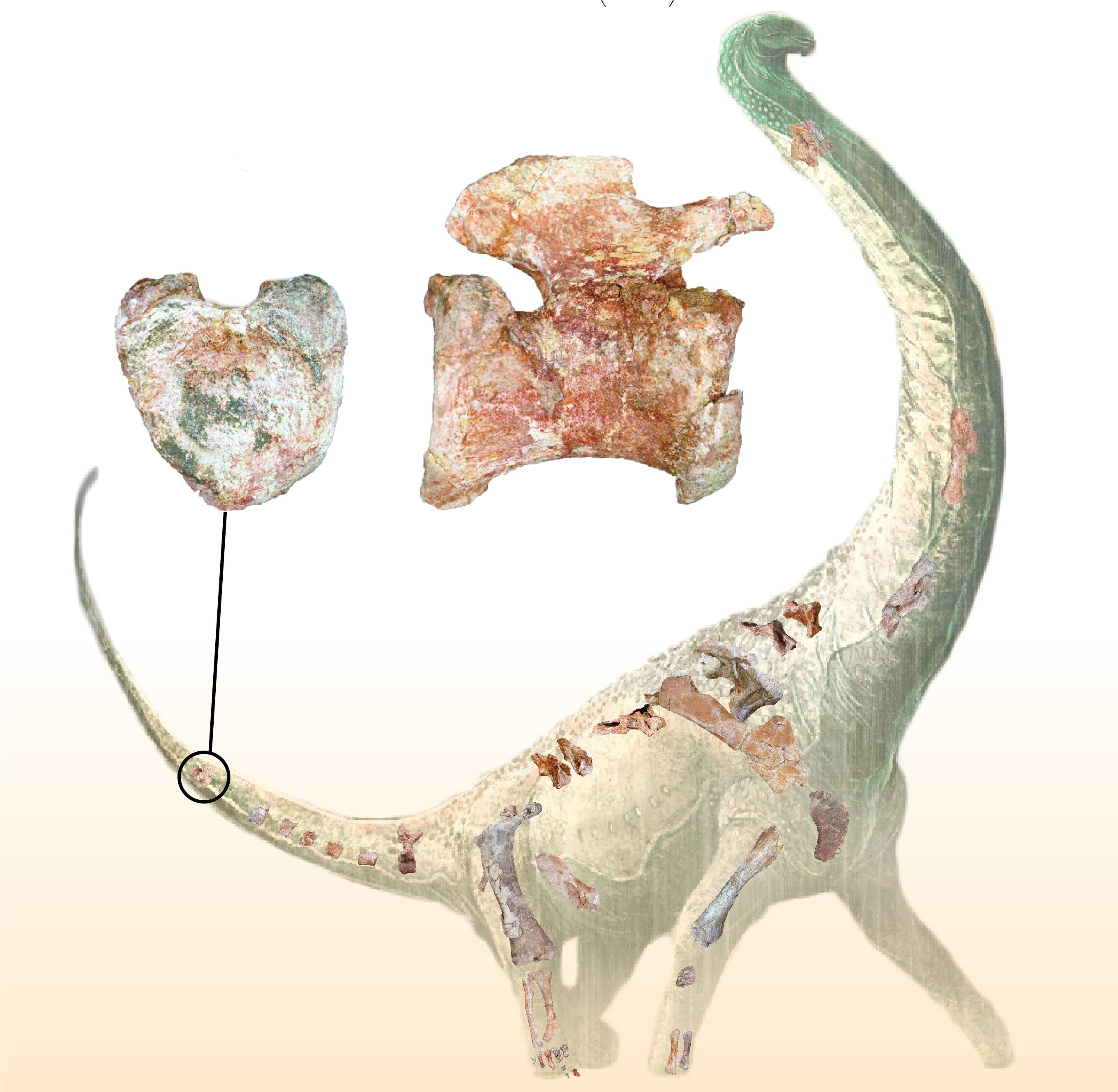 Illustration of the recovered bones, including the heart-shaped tailbones. (Image: Mark Witton)

The recovered Mnyamawamtuka skeleton belonged to a relatively small titanosaur individual, likely a juvenile that wasn’t yet fully grown. An average person is roughly the height of its hind legs, and it weighed about a ton. The full size of a grown Mnyamawamtuka could not be derived from this skeleton.

Features distinct to Mnyamawamtuka include a small sternal plate (chest bone), and a curious jumble of traits seen in both earlier and later titanosaur species, including different styles of teeth. And as noted, this oversized sauropod had a heart-shaped tailbone, comprised of two tail vertebrae with conspicuous extensions on the centrum (the central part of the vertebrae).

“We’re not quite sure of their functional significance,” said Gorscak. “It could be something related to stability between the tail bones or some sort of brace for the spinal cord.”

Other closely related titanosaurs, including Malawisaurus from nearby Malawi, is also known to have these expansions, but to a smaller degree, said Gorscak.

Mnyamawamtuka lived along a floodplain or river delta that experienced wet and dry seasons, according to the associated geological research. Animals that lived alongside it included other four-legged, long-necked sauropods, carnivorous theropod dinosaurs, turtles, and relatives of today’s crocodiles.

Titanosaurs are typically associated with fossils found in South America, but as this discovery and others are starting to show, the African landscape was an important part of their story as well.

“A large chunk of what we know about the evolutionary history of titanosaurs comes from the many species known from South America. But during the early half of the Cretaceous, Africa and South America were still connected before they eventually split up around the halfway point of the Cretaceous,” said Gorscak. “What we’re seeing with recent discoveries from Africa, such as Rukwatitan, Mansourasaurus, Shingopana, and now Mnyamawamtuka, is that titanosaurs were likely to be as diverse as their South American counterparts and there may have been a coarse division between the northern and southern half of Africa.”

Stephen Poropat, a palaeontologist from Swinburne University of Technology in Melbourne, Australia who wasn’t involved in the new work, said the importance of the Mnyamawamtuka specimen lies in its completeness, coupled with its age and geographic location.

“Having so many bones, representing most parts of the body, from a single individual is remarkable,” Poropat told Gizmodo. “This means that Mnyamawamtuka will probably prove to be one of the most important African titanosaurs discovered to date, since it might help us to understand where it and other African titanosaurs fit on the titanosaur family tree.

Indeed, this discovery, along with those in the future, will help scientists to better understand how these impressive animals evolved in response to perpetually changing environments—and why size apparently really, really mattered. [PLOS ONE]