A brutal dust storm engulfed Mars last summer. The planet-wide tempest spared the nuclear-powered Curiosity rover, but the older, solar-powered Opportunity rover shut down as the thick dust blocked light from the Sun. Opportunity has remained silent since June 10, 2018, despite NASA’s hundreds of attempts to contact it. When a windy season on Mars began in November, scientists hoped that gusts might clear debris from its solar panels, but that hope appears to have been in vain. NASA continues to send recovery commands, but sadly, it seems the Opportunity mission has finally come to an end.

At the same time, 2019 marks a historic milestone for the rover, which officially reached its 15th year on Mars on 25 January. This far exceeds the rover’s initial expected lifespan of 90 days. Together with the Spirit rover, whose end came back in 2010, the Mars Exploration Rover (MER) mission marks one of the most important scientific programs of the modern era, finding evidence that Mars was once covered in liquid and sending back iconic images of the planet’s surface.

In honour of Oppy’s 15th birthday, and with the knowledge that we may never hear from the rover again, we asked some scientists from the MER mission and elsewhere to share their thoughts and memories about Opportunity, Spirit, and their legacy.

I haven’t given up yet. We have a list of things to try, and we’re not done until we try everything on it. But we’re getting towards the bottom of the list, so it’s an appropriate time to start thinking about these things. As far as it feels, it actually feels good... It’s an honourable death. [The rovers] aren’t immortal. You know that you’re going to lose them sooner or later. To have a 90-day mission last for 15 years, and then end as a consequence of a one of the most ferocious dust storms to hit Mars in a very long time, we can walk away with our heads held high. The mission exceeded far beyond what I could have expected.

The legacy is tough... The legacy is the legacy of both Spirit and Opportunity, and the spirit and the legacy of the team that built them in the first place, the team of engineers, scientists, managers, leaders, and financial people. The reason it’s been such a success is because of what they did 15 years ago. That’s where the credit belongs.

On the scientific legacy, Mars turned out to be a much more interesting place than I expected. It changed the way humans look at Mars. The three landings that preceded ours were all on these flat, barren plains—on purpose—because they were the safest places to land. That’s all the land we saw. That’s what got me so excited about doing a rover mission. We have these little scenic rovers that have climbed mountains and descended into craters. Mars has become a real scenic, beautiful, interesting place in the sense that you can imagine being there and walking in the rovers’ tracks and seeing what they’ve seen. That changes our perspective.

The third part of the legacy is the effect these missions have had on kids. One of my fondest dreams, and I know this has probably happened, is an 8-year-old who watched television in 2004 the night we landed and thought to themselves, “Whoa, I think that’s cool, but I can do better.” I see evidence that the mission has done that to some degree, inspiring young people to pursue careers in science, engineering, and technology with their own dreams. Those rovers were the trailblazers. They had a huge impact. Having Opportunity on Mars has meant that we have new images from the surface of another planet since I was in high school. Our understanding of Mars has expanded, and I think that’s always maintained a level of excitement and interest. It’s been an inspiration for those of us working on Mars, students, and anyone in the public following along. It makes Mars accessible and close-by... I think the legacy is important for the idea of exploration, and motivating a generation to think we’re so close to another planet, and that we’re continuing to explore the Solar System and learning brand new things every day...

Everyone talks about the amazing engineering that allows us to have a robot driving on another planet without a mechanic in absurd conditions for 15 years. That’s an amazing accomplishment. But for me and the people on the team, there’s all of those 15 years. There were people here on Earth on science and engineering teams getting together three to five times a week addressing the progress from the day before, and carefully programming what Opportunity would do the next day. For that team, it’s more than just a robot, and we’ll miss it.... It’s been a lot of fun to work on, we’re happy it’s been so successful. And that level of dust was definitely an honourable death if we don’t hear from it again.

I hope Opportunity comes back on line! I was on the MER team back in grad school (2003-2009), which is a testament to how long the mission lasted—15 years is about three consecutive PhD lengths! Opportunity was doing great science up until it lost contact, and exploring new rock units that it never should have been able to reach by its original design parameters. Both Spirit and Opportunity wholly revolutionised the way we do science on Mars, and it is safe to say that we would not have Curiosity without the overwhelming successes of the MER mission. Spirit and Opportunity *figuratively* paved the way for Curiosity and future rovers throughout the Solar System, through their groundbreaking technical and scientific achievements.

Opportunity wildly surpassed any expectations we could have had for her. She unlocked the mystery of the hematite signal detected from orbiters before her, taught us about both watery and windy past conditions on Mars, and drove farther than any other rover beyond Earth. No matter what the Red Planet seemed to throw at her, she and her clever team of engineers managed to find a way around it—until this last global dust storm. But it’s only fitting that the thing that was finally able to take Oppy out was the strongest dust storm we’ve ever observed on Mars. Now she can rest, knowing she did humanity proud as our little robotic emissary.

The Opportunity rover was a real inspiration for me during the development of the Curiosity rover, because it showed how a virtual field geologist really could piece together the story of an ancient environment by studying the record held in the rocks. Ancient water flowing across the surface, playas in between dunes, groundwater soaking the rocks, such good stuff... it all kept me going during the hardest days of getting Curiosity to Mars. 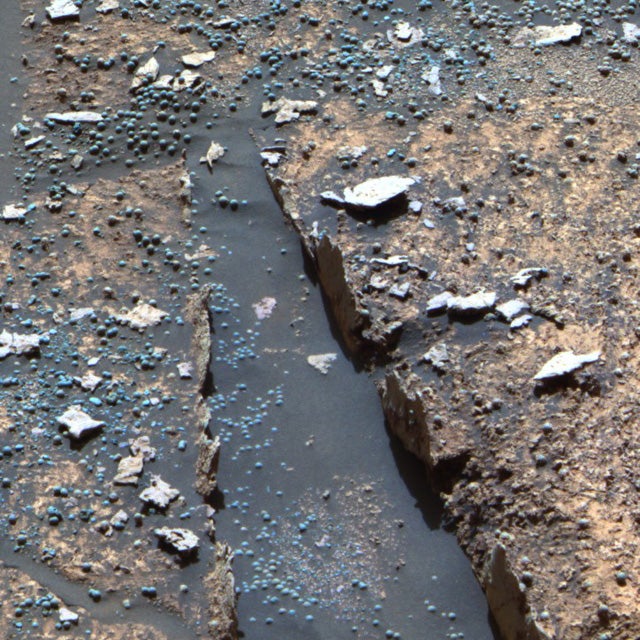 Images like this, which show formations likely created by flowing liquid, provided scientists with clues to Mars’ wet past. Taken by Opportunity on 17 July 2004. (Image: NASA/JPL-Caltech/Cornell)

Spirit and Opportunity really blazed a new path for public communications about an active science mission when Steve Squyres and Jim Bell made the choice to make all of the images available to the public when they arrived on Earth. They wanted to make sure that students could work with the data, and that it didn’t have to be on some password-protected server... Jim and Steve said, “No, we want the public to enjoy the adventure the same way we are.” That decision was so visionary. It created this huge international community of people who were able to follow the everyday dream of exploring another planet through the eyes of Spirit and Opportunity. People would make mosaics and animations, discuss the rocks they were seeing, and what the science team was doing. In a lot of instances, people in Europe would see the images before the American team woke up—Squyres liked checking these forums because it was easier than dealing with [the server].

Cassini’s team had no plan to share their images in this way. NASA’s Jet Propulsion Lab (JPL), having seen the Mars Exploration Rover mission said, okay, we’re going to share Cassini’s images as well. Many other missions followed in their footsteps—all of the Mars-landed missions, like Curiosity, Phoenix, and InSight. It’s influenced the European Space Agency to be more open with their image data—their structure is different than NASA’s structure, since the institutions build and supply the cameras—but the they were able to start sharing a camera called the VMC that shares images [from Mars] as soon as they hit Earth, and Rosetta shared their NavCam images pretty quickly. Juno and New Horizons shared their data pretty quickly... It had a profound influence on the way missions shared their data with the public.

I think it’s kind of interesting that when Opportunity originally went silent, a lot of people were ready to write it off instantly. That may have been a more pragmatic thing to do, but it didn’t take into account the feeling of the people who had been keeping this spacecraft alive for so long. I think it’s necessary for the team to exhaust every possibility so they could feel some closure on the mission. Some of them I’m sure don’t want to give up... It takes a huge emotional investment to keep these missions going. I guess I hope Opportunity does surprise us and comes back. I’m guessing it probably won’t, and I’m sorry to the engineers for their loss. People will need to take the time to mourn, and realise that it’s emotionally difficult.

I’ll miss, first and foremost, just interacting with the team on a regular basis. These folks have been working on this mission for a really long time, and even though people have left and others have come in, there’s this really wonderful sense of camaraderie. I can recognise everyone by their voice. I know we can rely on people when we encounter challenges or difficult science questions. It’s really fun to work through all these problems with the folks involved. I’ll also miss waking up every morning and seeing what the rover sent down, what the newest pictures are. Every day you get to see something no human has ever seen before.

I have a very personal story with the rover. I was in high school when Spirit and Opportunity landed. There was a program run by The Planetary Society called the Student Astronaut Program which brought high schoolers out to JPL to be there the night the rover landed. I was there the night that Opportunity landed, and it was an amazing experience that inspired me to go into planetary science.

The way both Spirit and Opportunity transformed Mars science was pretty profound... It gave us a new perspective on the planet we didn’t have in the year 2000. The rovers were sent to follow the water, and before we go there we didn’t have any definitive evidence that there had ever been liquid water on Mars in the past. It was the first images from Oppy, and later images from Spirit, that were incontrovertible evidence that Mars had a different climate that could support liquid water on the surface. It opened a whole new parameter space for questions we could ask about Martian evolution. These questions were answered by the Curiosity rover, a bigger new rover with more sophisticated instruments, and some of them will be answered by the sample return missions; some will need future missions to answer. We didn’t even know what questions to ask before we had the results from Spirit and Opportunity.

I’m just thrilled that it lasted as long as it’s been. It’s a celebration for how successful and groundbreaking this mission was. 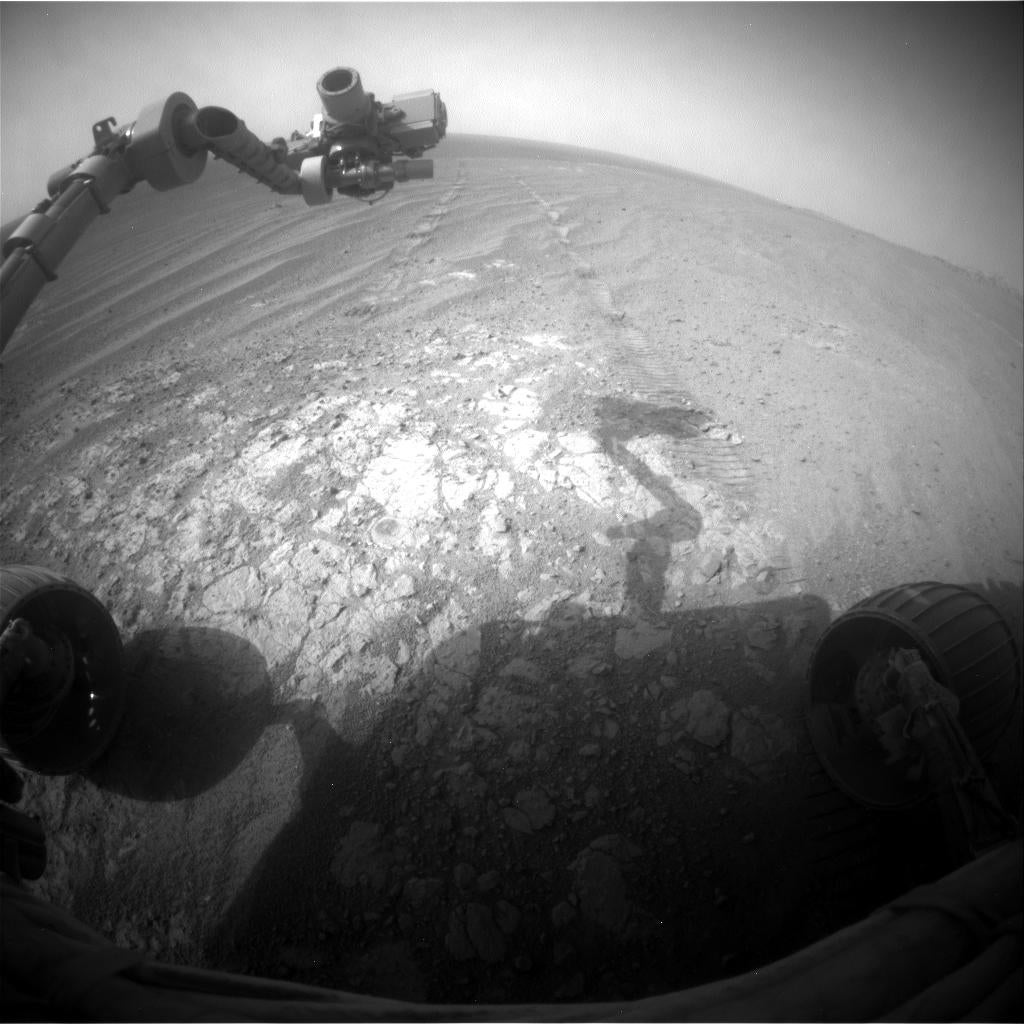