You Can Now Check the Weather on Mars Every Day

Instruments aboard NASA’s InSight lander are now gathering meteorological data from the Martian surface, allowing for daily weather reports that are being made available to the public.

InSight landed close to the equator and is currently experiencing the Martian winter—a time when storms become more active. Remarkably, the probe is already picking up meteorological data to that effect, as Cornell University astronomer Don Banfield explained in a statement.

“Since the lander is close to the equator, I didn’t think we’d see any evidence of the storms that are 60-degrees north latitude, but we’re already seeing evidence of the high and low pressure-signal waves that create weather on Mars,” he said. “We can see those waves all the way down near the equator, as the waves are big enough that they have a signature. That was a surprise.”

To collect this information, InSight is equipped with a suite of sensors developed by NASA’s Jet Propulsion Laboratory, Cornell University, and Spain’s Centro de Astrobiología. These instruments, collectively known as the Auxiliary Payload Subsystem (APSS), collect data each second of every Martian day, or sol (one Martian day is 24 hours, 39 minutes, and 35.244 seconds). InSight transmits this data back to Earth each day, allowing for the daily weather reports. InSight will continue with this data gathering for the next two years, so in addition to the daily updates, we’ll get to see the bigger picture in terms of Mars’ seasonal variations. 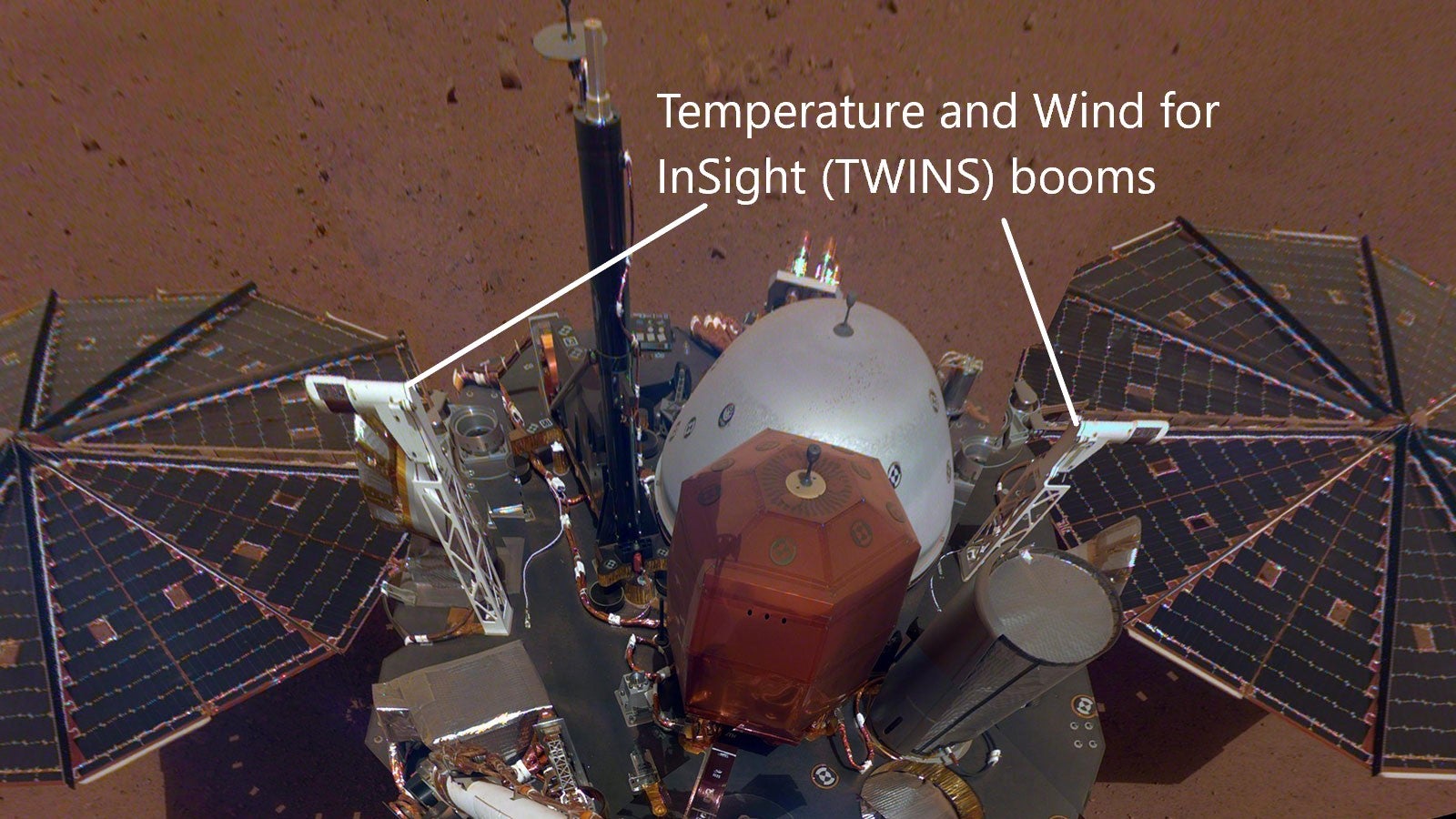 The TWINS instruments on the InSight lander, one facing east and one west. (Image: NASA/JPL-Caltech)

APSS consists of an air pressure sensor inside the lander, a pair of air temperature and wind sensors on the deck (called TWINS), and a magnetometer (the first to ever reach the surface of another planet) located on the edge of the deck. One of the TWINS sensors faces east and one faces west. This instrument will let the InSight team know if high winds are interfering with InSight’s seismometer, known as SEIS.

Indeed, APSS is good for planetary meteorology, but it’s also crucial to the success of the InSight mission. By monitoring the conditions around the probe, NASA scientists will know if weather is disrupting sensitive equipment, namely SEIS and the heat flow probe, both of which are now deployed on the Martian surface. Both instruments are affected by large temperature swings, and SEIS is particularly sensitive to air pressure changes and wind.

“APSS will help us filter out environmental noise in the seismic data and know when we’re seeing a marsquake and when we aren’t,” said Banfield in a NASA statement. “By operating continuously, we’ll also see a more detailed view of the weather than most surface missions, which usually collect data only intermittently throughout a sol.” 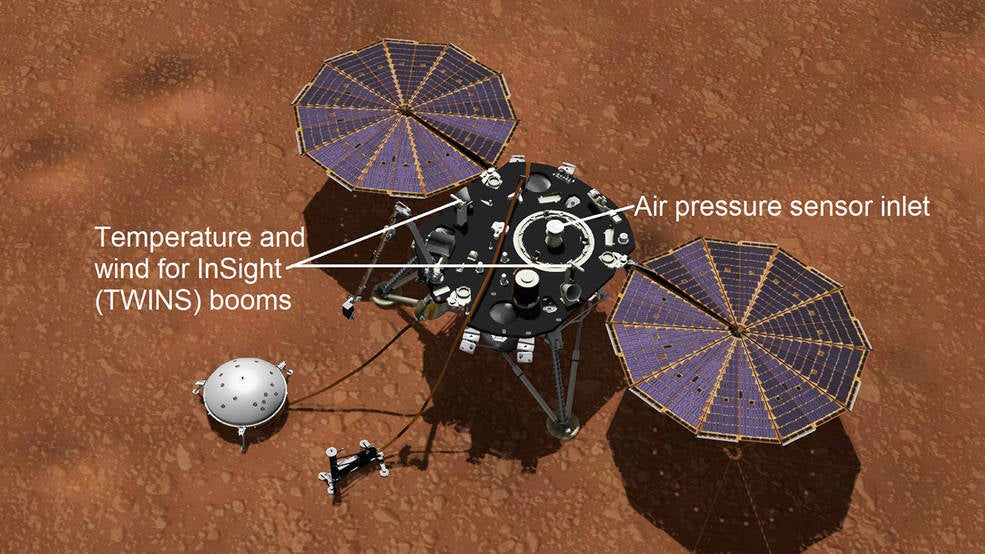 Artist’s conception of NASA’s InSight lander with its instruments deployed on the Martian surface. (Image: NASA/JPL-Caltech)

And as NASA pointed out, TWINS will also allow scientists to study the way winds move dust around the Martian surface:

Scientists don’t know how much wind it takes to lift dust in Mars’ thin atmosphere, which affects dune formation and dust storms—including planet-encircling dust storms like the one that occurred last year, effectively ending the Opportunity rover’s mission.

APSS will also help the mission team learn about dust devils that have left streaks on the planet’s surface. Dust devils are essentially low-pressure whirlwinds, so InSight’s air pressure sensor can detect when one is near. It’s highly sensitive—10 times more so than equipment on the Viking and Pathfinder landers—enabling the team to study dust devils from hundreds of feet (dozens of metres) away.

“They do shake the lander, and we’ve seen a lot of that. They even tilt the ground, [which we know] because we have such a sensitive seismometer,” said Banfield in the NASA statement. “On Earth, the desert’s dust devils would be likely 15 meters [50 feet] across and almost a kilometre tall. On Mars, they can be 5 to 10 kilometres (3 to 6 miles) tall. Big ones are 100 meters [330 feet] or more in diameter.”

Yikes—that’s actually kind of scary. A direct hit from a dust devil with sufficient size and speed couldn’t possibly be good for InSight and its sensitive equipment. Fingers firmly crossed that nothing of the sort will happen during the mission. [NASA, Cornell University]