The Dell XPS 13 has been so dangerously close to perfect for so long that the latest iteration left me a little surprised. I was turning it this way and that to find something I could fault it for, not because I wanted to unfairly ding the product, it’s just that nothing is perfect. But Dell has so refined this version of its best 13-inch laptop that the issues with it are all minute and deeply personal. This is a near perfect laptop.

What is it? The 2019 refresh of Dell's best laptop.
Price: Starts at £999; reviewed at £1,650
Like: Just about everything.
Don't Like: Some people might find the two-tone design unattractive.

We talk a lot about the 13-inch MacBook Pro because, for many people, this is what comes to mind when you say “good laptop.” It doesn’t matter if you’re a macOS or a Windows 10 fan, everyone can agree that the Apple lineup is wonderfully engineered and great for the majority of people. Recently, Huawei’s MateBook laptops are the rare Windows 10 laptops that come close to that kind of universal appeal (and largely because their design is so clearly inspired by Apple). The XPS 13 used to ape Apple, too, but it has since moved on to its own design language that’s just as pretty.

All the iterations of the new XPS 13 look the same, and most people will find the hardware attractive, even though Dell has abandoned the aluminium unibody look popularised by Apple. While I quite like it, reactions from colleagues were sometimes less enthusiastic. Some felt it looked cheap. In part, I think people don’t like how the device uses multiple materials, giving it a cobbled together look. With the device closed, all you see is aluminium, with a finish that picks up marks easily. Flip it open, and the insides are glass and carbon fibre. From afar, the white carbon fibre of the device I tested can look bland, but the experience of using that material is exceptional. The carbon fibre palm rest distributes heat differently than a metal palm rest does. It’s pleasantly warm when I open it up after commuting through a winter storm, while staying cool when the computer’s guts are cranking and the fans have kicked in. 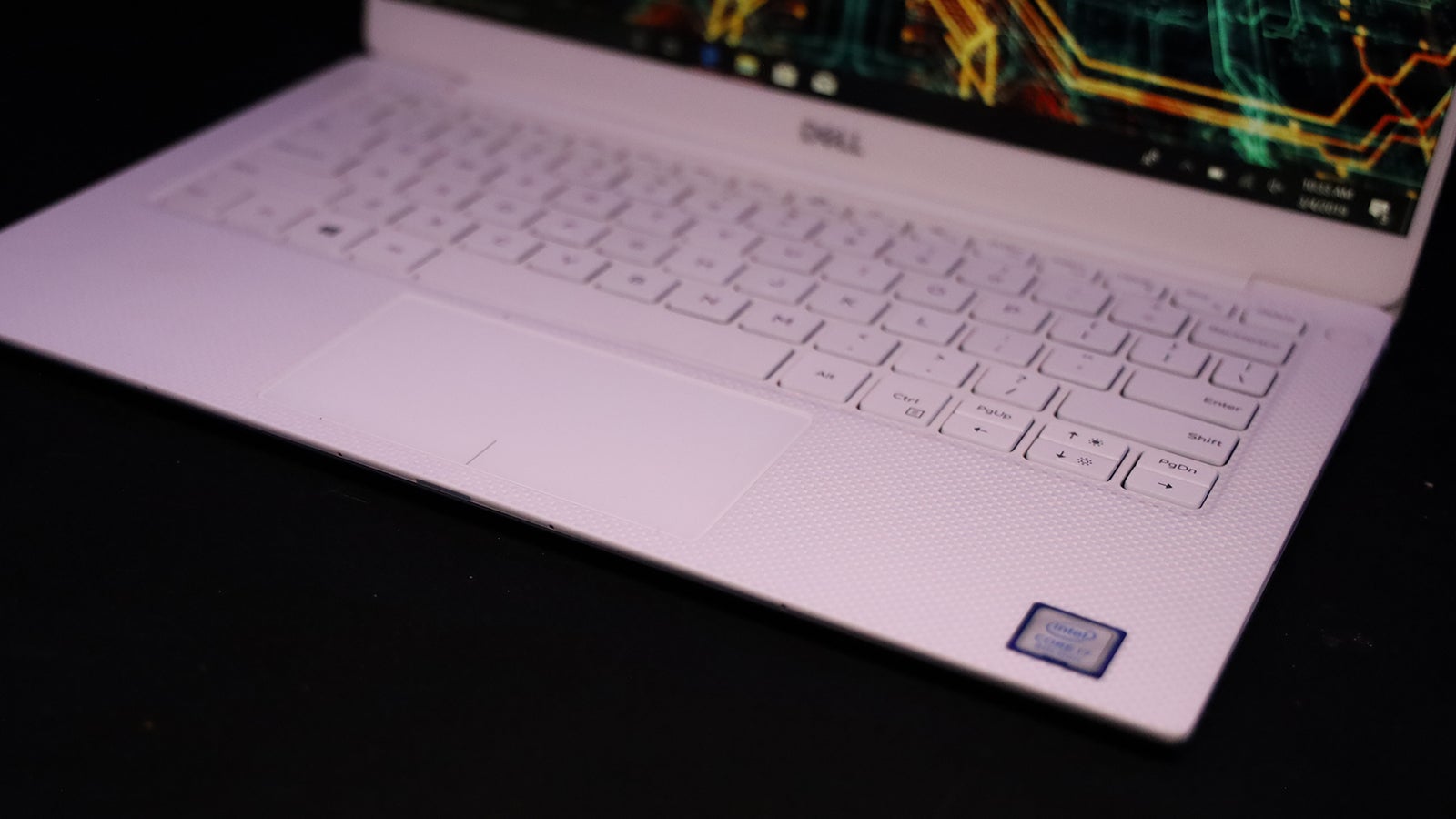 Everything about the part of the computer you spend most of your time looking at is elegant. The display and bezels appear as one seamless piece beneath the glass. The XPS 13 still has some of the slimmest bezels you can find on any laptop, a craze it helped start years ago. Constantly shrinking bezels led to an unfortunate flaw in recent years. With no bezel left to contain a webcam, Dell engineers opted to stick one below the display, giving people on the other end of your Skype call an unflattering look up your nose.

A low webcam is kind of tolerable in Huawei’s MateBook X, which at least hides the webcam behind a clever mechanism in the keyboard. Sure the shots are unflattering, but the webcam disappears when not in use. On previous versions of the XPS 13, it’s just been this ugly little mole on the bottom bezel. Now, it’s right back up top where it belongs. Dell accomplished the feat by using a much smaller than average webcam (it’s still 1080p resolution). It works surprisingly well for being such a physically smaller camera apparatus. It’s good enough for a Skype or teleconference call—though it wouldn’t be my first choice for a Twitch stream. 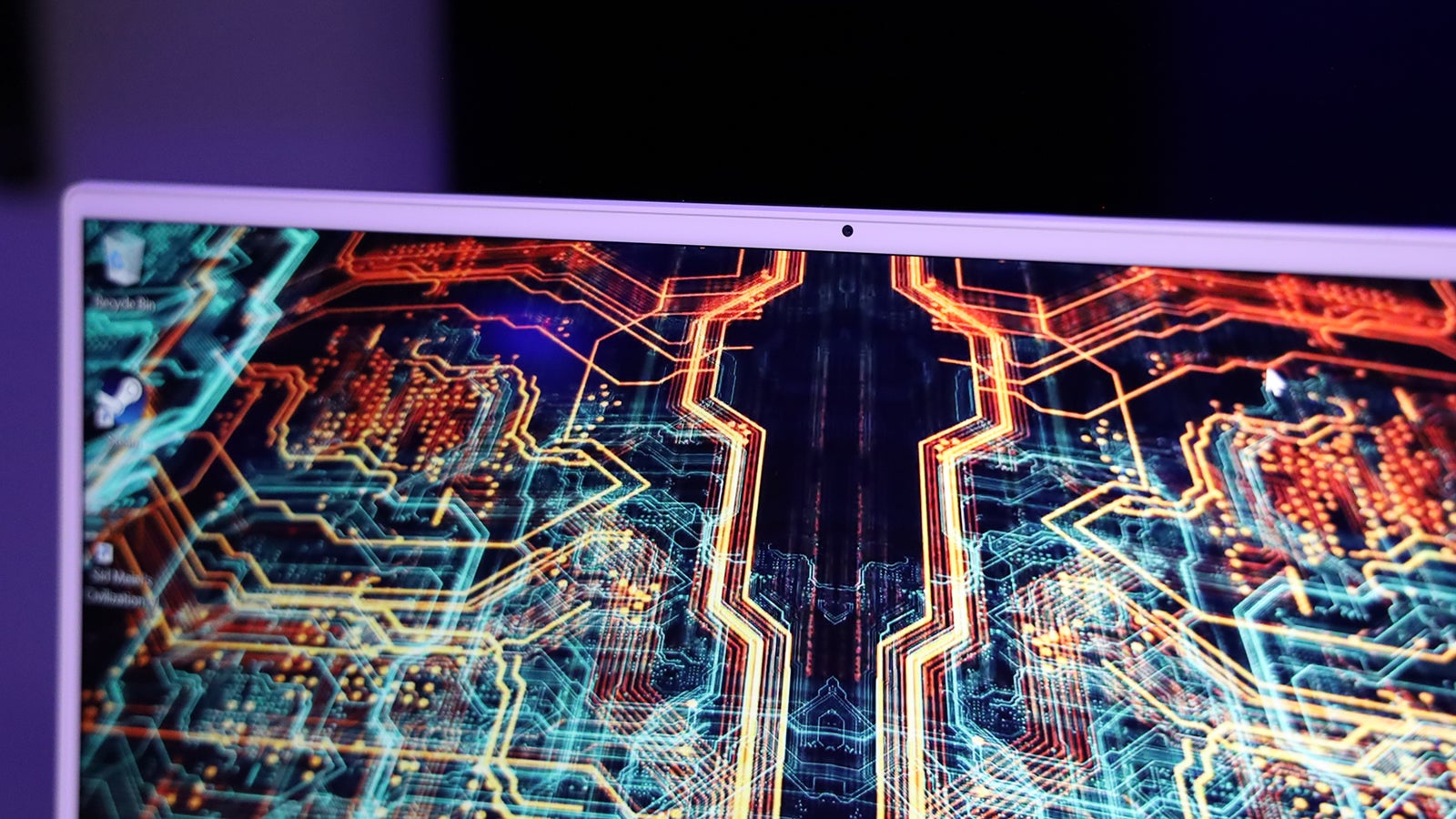 Heck, the Dell XPS 13 wouldn’t be my first choice for video game streaming, full stop. While it’s plenty fast, with the i7 I reviewed pulling off scores right in line with the similarly configured MateBook 13, the Dell XPS 13 lacks the discrete graphics card option the MateBook lineup and the faster (but similarly priced) Razer Blade Stealth offer. Instead, it has the Intel 620 integrated GPU. That means it will be fine for most work, but will never compete, performance-wise, with the MateBook 13 or Razer Blade Stealth when it comes to games.

The Dell XPS 13 does manage some decent battery life though. The device I reviewed has a battery-sucking 4K display, and still managed 9 hours and 26 minutes in our test. The 2,160 by 1,440 MateBook 13 lasted just 8 hours and 9 minutes on a charge. The Razer Blade Stealth lasted 10 hours and 11 minutes, though, the one we tested, with the same i7 processor as the XPS 13, also has a less demanding 1080p display. I’d expect 1080p versions of the Dell XPS 13 to perform similarly, if not better than, the Razer Blade Stealth.

I found myself thinking about the Stealth a lot as I reviewed the XPS 13. They’re similarly configured devices that are priced about the same, and both have a nice sharp design that’s refreshingly different than what Apple has been throwing at us for a decade. But the Razer Blade Stealth is a little bigger and heavier. It’s .58 inches thick, while the Dell XPS 13 is .3 inches at its thinnest point and .46 inches at its thickest. The XPS 13 starts at 2.7 pounds while the Razer Blade Stealth starts at 2.82. With loud fans, a USB-C port, a Thunderbolt 3 port, and two USB-A 3.1 ports, the Razer Blade Stealth doesn’t feel quite as flexible as the Dell XPS 13 with its three Thunderbolt 3 ports and that single MicroSD card slot.

But though they are similar, they’re intended for very different purposes. The Razer Blade Stealth, which comes in black or pink, is intended more for gamers, while the Dell XPS 13, which comes in Alpine White, Rose Gold, or Platinum Silver, is intended to be for anyone, and for most people it’s the better, smaller, and cheaper laptop. If you’re out to buy a very good laptop and you don’t require a Mac, then the new Dell XPS 13 should be one of the first devices you look at. It’s taken a while, but Dell damn near perfected the 13-inch laptop.