By injecting nanoparticles into the eyes of mice, scientists gave them the ability to see near-infrared light—a wavelength not normally visible to rodents (or people). It’s an extraordinary achievement, one made even more extraordinary with the realisation that a similar technique could be used in humans.

Of all the remarkable things done to mice over the years, this latest achievement, described yesterday in the science journal Cell, is among the most sci-fi.

A research team, led by Tian Xue from the University of Science and Technology of China and Gang Han from the University of Massachusetts Medical School, modified the vision of mice such that they were able to see near-infrared light (NIR), in addition to retaining their natural ability to see normal light. This was done by injecting special nanoparticles into their eyes, with the effect lasting for around 10 weeks and without any serious side effects.

A series of tests showed that the mice were indeed seeing infrared light, and not some other stimuli. The researchers say the human eye is not too dissimilar from those of mice, leading to the fantastic prospect of applying a similar technique to humans.

Humans and mice can only see a limited range within the electromagnetic spectrum, indicated here by the rainbow-like band. Other animals, including birds, can see ultraviolet (UV) light. (Image: Cell)

Humans, like mice, have visual access to a limited range of the electromagnetic spectrum. The range of wavelengths invisible to humans is vast, and consequently we can’t see anything outside of the so-called visible spectrum (wavelengths between 380 to 740 nanometres). Infrared radiation exists as longer wavelengths along the spectrum, ranging from around 800 nanometres to a full millimetre. Past infrared are the even longer wavelengths of microwaves and radio waves

Objects in the world, whether they’re people or a piping hot bowl of soup or evenly something as seemingly cold as an ice cube, emit infrared radiation as they give off heat. Mammals like humans and mice cannot see NIR, but we have technologies, namely night-vision or heat-vision goggles, that can convert this otherwise invisible spectrum into a format we can see. The new technique used on mice does something a bit similar, but instead of relying on wearable tech, the scientists got right down into the biology of the business.

To allow mice to see beyond the usual visual spectrum, Tian and Gang developed special “upconversion” nanoparticles capable of functioning within the rodents’ pre-existing ocular structures. Drops of fluid containing the tiny particles were injected directly in their eyes, where, using special anchors, they latched on tightly to photoreceptor cells. Photoreceptor cells—the rods and cones—normally absorb the wavelengths of incoming visible light, which the brain interprets as sight. In the experiment, however, the newly introduced nanoparticles upconverted incoming NIR into a visible wavelength, which the mouse brain was then capable of processing as visual information (in this case, they saw NIR as greenish light). The nanoparticles clung on for nearly two months, allowing the mice to see both NIR and visible light with minimal side effects. 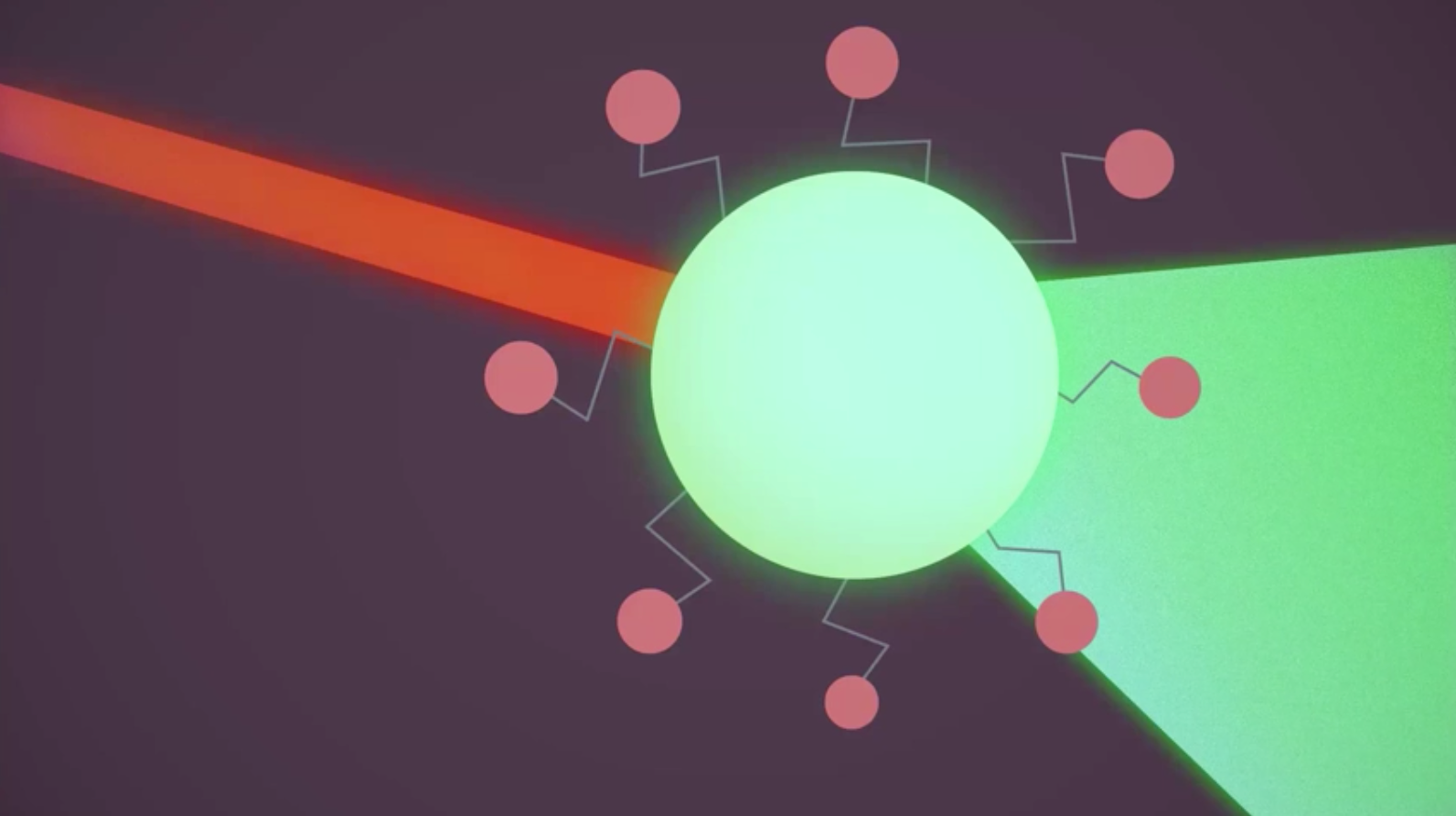 Essentially, the nanoparticles on the photoreceptor cells served as a transducer, or converter, for infrared light. The longer infrared wavelengths were captured in the retina by the nanoparticles, which then relayed them as shorter wavelengths within the visible light range. The rods and cones—which are built to absorb the shorter wavelengths—were thus able to accept this signal, and then send this upconverted information to the visual cortex for processing. Specifically, the injected particles absorbed NIR around 980 nanometres in wavelength and converted it to light in the area of 535 nanometres. For the mice, this translated to seeing the infrared light as the colour green. The result was similar to seeing NIR with night-vision goggles, except that the mice were able to retain their normal view of visible light as well. As noted, the effect was temporary, lasting a few weeks, with some mice experiencing cloudy corneas, which cleared up quickly.

To prove the method really worked, Tian and Gang set up a series of tests and experiments.

Behavioural tests also showed the method was working. Mice placed in a Y-shaped water maze were taught to recognise the location of a hidden platform to seek refuge, which was indicated by a NIR-lit display. In tests, injected mice consistently located the platform whereas the mice without injections swam randomly around the maze. Another test involved a box with two compartments: one completely dark with no light whatsoever, and one lit with NIR. Mice, as nocturnal creatures, gravitate towards darkness. In tests, injected mice spent more time in the dark compartment, whereas uninjected mice exhibited no preference.

“These extensive experiments leave no doubt that mice injected with infrared-sensitive nanoparticles gain the ability to detect infrared light and obtain visual information from it,” Vladimir J. Kefalov, a professor of ophthalmology and visual sciences at Washington University in St. Louis who wasn’t affiliated with the new study, told Gizmodo.

In a press release, Tian said the nanoparticles clung to both rods and cones and were activated by the near-infrared light, so “we believe this technology will also work in human eyes, not only for generating super vision but also for therapeutic solutions in human red colour vision deficits.” In an interview with Cell, he elaborated further, saying:

Unlike mice, humans and other primates have a structure called fovea in the retina, which mediates the high acuity central vision. In the human fovea, the density of cones is much higher than that of rods; while in the mouse retina, the number of rods predominate everywhere... Since cones have different spectrum and intensity sensitivity to light comparing with rods, we might need to fine tune the emission spectrum of the UCNP to more efficiently active a particular type of cones in human.

As Tian noted, the treatment would have to modified for humans to work, but the new experiment suggests it’s within the realm of possibility. Kefalov said the potential for applying a similar concept in humans is both real and exciting, but he cautioned that we still have a long way to go.

“The authors demonstrate that a single injection with nanoparticles has no long-term adverse effects on the mouse retina,” said Kefalov. “However, it is not clear whether achieving practical infrared vision in humans will require repetitive injections and, if so, whether such chronic treatment will have adverse long-term effects on the structure and function of our eyes.”

Acquiring the capacity to see infrared light seems like science fiction and the stuff of transhumanist fantasies (raises hand), but it would be an unquestionably useful trait. We’d be able to see a variety of things outside our normal visual range—and we’d effectively have built-in night vision. As Tian explained to Cell:

Human beings have been trying to develop new technology to enable abilities that are beyond our natural abilities. Visible light that can be perceived by human’s natural vision just occupies a very small fraction of the electromagnetic spectrum. Electromagnetic waves longer or shorter than our visible light carry much more information...Depending on the material, an object can also have distinct NIR absorption and reflection. We could not detect that information with our naked eyes.

Another cool thing about this potential enhancement is that it wouldn’t require a person to wear cumbersome and energy-intensive equipment, such as the aforementioned night-vision goggles. Nor does it require any genetic manipulation. The military will very likely be interested in this work.

Dayong Jin from the School of Mathematical and Physical Sciences at the University of Technology Sydney described the new work as “very innovative and inspiring.” Dayong, who wasn’t involved with the study, said that, to the best of his knowledge, “this work is the first demonstration of implantable and ‘wearable’ optical nanodevices.” He said it was important that no inflammation or cellular death was observed in the mice, but it’s possible that some cells sucked up the nanoparticles, a prospect “which deserves some more careful investigations.”

Likewise, Kefalov was impressed with the research, saying “the authors did an amazingly good job characterizing the effects of injecting infrared-sensitive nanoparticles on the visual function of mice,” adding that this “pioneering work demonstrates an ingenious and powerful method of enhancing the ability of the visual system to detect light beyond the natural visible range.” He thought it was “amazing” that the nanoparticles didn’t appear to interfere with the normal function of photoreceptors in visible light.

As to whether the technique could be used to correct impaired vision, such as colour blindness, that’s less clear, he said.

“As the method relies on the innate ability of photoreceptors to detect and amplify light signals, using this approach for overcoming impaired photoreceptor function will require development of additional steps beyond enabling detection of light outside of the visible range,” Kefalov told Gizmodo.

Looking ahead, Tian and Gang would like to improve the technique with organic-based nanoparticles comprised of US government-approved compounds, which could result in even brighter infrared vision. They’d also like to tweak the technique to make it more responsive to human biology. Optimistic of where this technology is headed, Tian and Gang have already claimed a patent application related to their work.

I can already imagine the TV adverts: “Ask your doctor if near-infrared vision is right for you.” [Cell]