On Star Trek: Discovery, the Consequences Are Finally Starting to Catch Up With Our Heroes

One of the most disconcerting things about Discovery’s second season (not from a quality standpoint, mind you—it’s been pretty great in general so far) has been how many wild things our heroes have managed to get away with, with little in the way of consequence. On the latest episode, all that changed in the best way.

I was very hard on last week’s Star Trek: Discovery for spinning its wheels in some frustrating ways, but am more than happy to consign it to the dustbin of my memory thanks to “If Memory Serves” basically being the episode it should have been. It was not only an episode that does a far better job of splitting the focus between Michael and Spock and the goings on aboard the Discovery but one that finally pays off all the seemingly endless Spockteasing that’s lingered on the periphery of basically every episode in season two.

And thankfully, to satiate my other lingering desire for this season so far, it basically does that by tapping every one of our heroes on the shoulder and thematically going “so hey, that risky gamble that seemingly paid off for you a few episodes ago? About thaaaaaaaat...”

For Saru and Pike, for Michael and Spock, for Stamets, for the crew of the Discovery at large, hell, even for Leland and whatever soul Section 31 might have had before Georgiou, this was an episode where not only did the consequences of some pretty dodgy ass-pulls come back to haunt them, but did so at the most fascinatingly worst time. 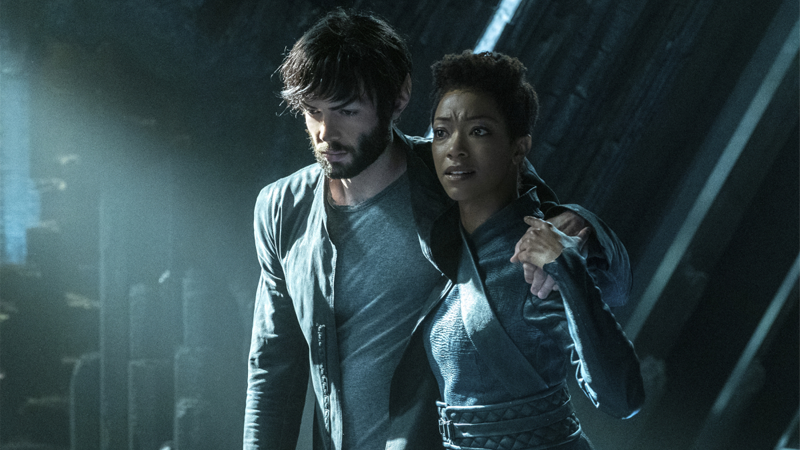 On Talos IV, Michael and Spock finally share an uneasy reunion. Or at least, one where they’re both conscious. (Photo: CBS)

Let’s start with Burnham and Spock, who find themselves back where Trek began on the planet Talos IV—a desperate bit of guidance by Spock in the hopes that the powerful psychic denizens of the forbidden planet can put his mind back together. In the process, Discovery finally stops teasing and lays out what the big deal of its arc this season is, and suffice to say, it’s not good for anyone. The Red Angel is indeed a time traveller, but one attempting to offer a warning of a devastating future to come. Apparently, an unknown race (using tech looking a lot like the future-probe-octopus-Matrix-thing—fine, Jill wins—that menaced Ash and Pike last week) invades the Federation and wipes it out entirely. Spock’s state isn’t because the Red Angel really damaged his psyche, but because his sense of time itself—the constant that has anchored him as he navigated his Vulcan logic and Human emotions—has been thrown out of sorts by this future vision.

But before the Talosians can work their way through all that, they—in a nice callback to their sinister undertones from “The Cage”—make a demand of Burnham and Spock: in exchange for showing Michael Spock’s vision, they want to witness what caused the rift with them that’s so clear you don’t need to be a giant-brained-psychic to spot it from a million miles away. So we finally get to see the terrible deed Michael did to irrevocably damage her relationship with her adoptive brother, and, thankfully, it’s not some deep dark secret or MacGuffin, but actually pretty simple: the night she ran away from Sarek’s home, she lays into his half-human heritage and attempts to burn every bridge she’d built with the young Vulcan in order to push him away. She calls him a freak of nature that wasn’t worth her investing herself in emotionally any more. 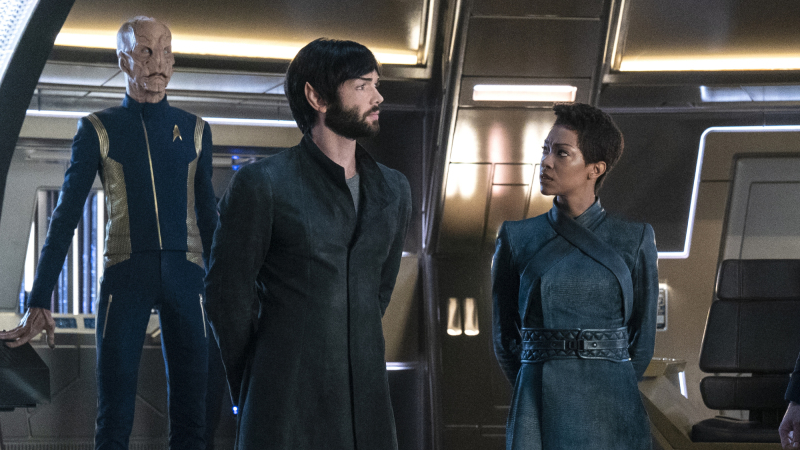 Spock and Michael might have to work together to save the day now, but it doesn’t magically erase the damage to their relationship as brother and sister. (Photo: CBS)

On the surface, it doesn’t seem like it was worth all the build-up, at least if you were expecting something really huge and MacGuffin-y. But instead, rightfully, it’s major on a personal level for both Michael and Spock—although the latter comes to realise that Michael, trying to be logical, was pushing him away so he wouldn’t be hurt and targeted by anti-human dissidents as she had been. It’s not something she should’ve expected someone as young as Spock was, still trying to wrangle with the emotions roiling inside of him, to understand. The intent might have been out of love, but it doesn’t stop it from being any less cruel and devastating to the young boy—and now the hurt of it is something that can ever really go disappear from their relationship, even years later. Even in the face of the potential end of the universe as they know it.

And that’s the most important thing about this entire episode, for Michael and Spock but also the rest of our heroes. In a worse timeline, “If Memory Serves” could’ve ended with Spock and Michael quipping at each other and being all buddy-buddy—because with their rocky past aired out in the open and the looming threat of temporal war as something they have to work together to stop, they should be fine now, right? But Spock makes it clear to Michael: they can work together as professionals and as Starfleet officers to deal with this crisis, but doing that does not magically erase the years of trauma Michael’s actions had on him, and it’s going to take a lot more than taking him on a field trip to break General Order 7 to undo all that. And at last—at long last—someone on this season has to live with the consequences of a shitty decision they made in the past. 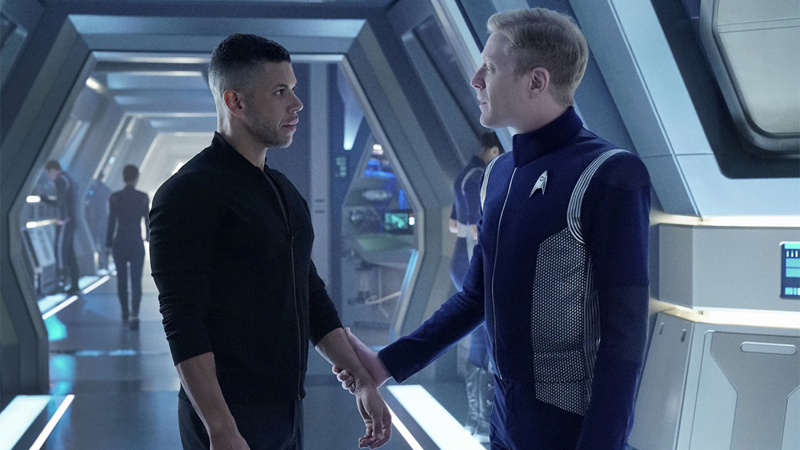 Stamets finally begins to realise that the Culber that came back from the spore network is not really the husband he lost. (Photo: CBS)

Michael might be first in line for that reckoning, but she is far from the only one. Back aboard the Discovery (tasked with dealing with the aftermath of last week’s Temporal Rift while Section 31 hunts down Michael and Spock), the tension around Doctor Culber’s return finally explodes—and Stamets is forced to reckon with the fact that magically bringing his husband back from the dead isn’t going to suddenly make things go back to the way they were. Neither can they gloss over the intense trauma Culber is going through remembering not just being dead, but being brought back in an entirely new body that is paradoxically both his own and something completely alien.

Stamet’s assumption that everything is hunky-dory because he got what he wanted, regardless of how Hugh feels about the impossible scenario he’s in, doesn’t just lead to a seemingly complete breakdown of his relationship with Culber, but wider ramifications for Discovery’s crew. After storming out of dinner with Stamets, Culber goes straight to the ship’s canteen and starts whaling on Ash, hoping to “bring Voq out” and attempt to deal with all the feelings he’s going through thanks to his death at the Klingon’s hands (technically they were human hands given they were Ash’s, but you know what I mean). And to throw another bit of fuel on the consequence fire, no one breaks it up because Saru orders them not to: his newly-evolved sense of brashness believing it to be the best way to resolve the walking HR disaster that is a man being forced to live and work on a ship alongside the man who murdered him. Which it most certainly isn’t, and immediately comes back to haunt the crew, even if they don’t realise it just yet. 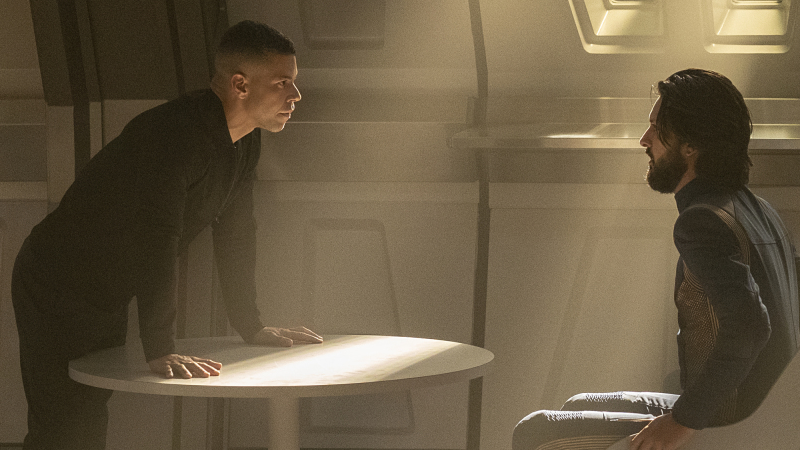 As Pike knocks Saru for afterwards—specifically citing that it’s maybe not a decision the Kelpien would have made before his own recent evolutionary kickstart—that’s not the way Starfleet resolves disputes between officers, especially because it now brings an outright distrust or even disdain of Ash’s presence aboard Discovery out to the fore. And just in time for the discovery of subterfuge on the ship’s Spore Drive, which almost stops the crew from going and picking up Michael and Spock on Talos IV before Section 31 can.

The audience, of course, know that it’s Airiam—having been corrupted by the future-probe’s virus last week—who’s likely behind said subterfuge. But between his confrontation with Culber and a lingering distrust of Section 31's presence aboard the ship, Ash becomes an easy target, and Pike makes his own terrible choice and consigns Ash to the brig before enacting his rescue plan. So now Discovery is not just committing treason by defying General Order 7 and heading to Talos, its crew is still unaware that an unwitting agent of the future threat it now has to stop (while being on the run from the Federation, to boot!) is still aboard the ship. 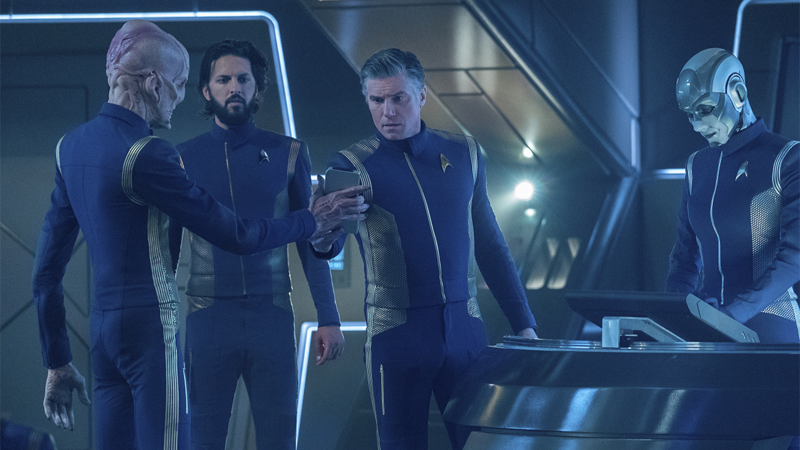 Captain Pike turns right instead of left in his hasty hunt for a double agent on Discovery’s bridge. (Photo: CBS)

It’s bad—for our heroes, at least. For us as viewers, though, it’s fantastic. A lot of this season has felt like the Discovery crew have gotten away with a lot of things they shouldn’t have with little in the way of ramifications—flaunting the rules here and there, escaping grave consequences scot-free. It’s felt like, just as we were waiting to finally see what the deal with Spock and the Red Angel, we were also waiting for the other shoe to drop. If our heroes can get out of every scrape, no matter how dire, perfectly fine thanks to a convenient get out, what were the stakes of this season? How many times could huge things happen with no problems down the line?

Now, the shoe has finally dropped and did so in a satisfyingly dramatic fashion—not just on the grand level of this season’s arc, but on a character level too, especially for Michael and Stamets. The shoe’s going to continue to drop too, until Pike and his crew discover just how badly they dealt with the double agent in their midst. With everything out in the open and the path for the season now coming into focus, it’s going to be incredible to watch these characters actually have to come to terms with the choices they’ve been making—and I can’t wait to see it play out.