If you’re reading this, I’m going to make a bit of an assumption: You’re probably a big fan of some nerdy stuff, be it sci-fi, superheroes, comic books (if you aren’t, well...I’m not sure why you’re here, but not my place to tell you how to spend your time!), or whatever. And you’re probably pretty open about it, too.

We live in a pretty ridiculous time to be a nerd, in ways that are good—our favourite universes and heroes are the pre-eminent Hollywood blockbuster stars of our time!—and bad; all that gatekeeping harassment and abuse is pretty awful and you should cut it the hell out! But what I think is wholly a good thing is that loving weird, nerdy stuff is definitely not as ostracising as it was even a decade ago.

People from all walks of life share their love of video games, of comics, of Marvel and DC, of Stars of the Trek and Wars varieties, and a zillion other nerdy things proudly on the heart firmly attached to their sleeves. And that’s good! Like the things you like, share that love to make connections with other people, don’t be an arsehole about it (seriously, stop it)! Broaden your horizons, interact with fandoms and communities that are diverse and vibrant and connected by a love for stories that champion the ideals of working together, tolerance (except when it comes to confronting the intolerance), and generally not being an arsehole! But a show I’ve been watching recently, Tokusatsu GaGaGa, is set in a scenario where being able to do all that is necessary for its protagonist.

Kano’s mother confiscates an EmerJason badge off of her as a child. (GIF: Tokusatsu GaGaGa/NHK/Big Nova Subs)

J-Drama Tokusatsu GaGaGa is a live-action adaptation of the slice of life/comedy manga of the same name by Niwa Tanba. It follows a mid-20s office worker named Kano Nakamura who, as the title might suggest, is a huge fan of Tokusatsu shows—special effects-driven action-adventure series like Super Sentai (which gets turned into Power Rangers for the West) or Kamen Rider—specifically a pastiche of Sentai called Juushowan. But Kano has to keep her love of costumed heroes to herself.

In Japan, although there are adult fans of these long-running superhero shows, Tokusatsu is generally almost explicitly aimed at little kids—they’re the sort of series that you can watch as a kid (and get the toys marketed at you), but are expected to grow out of by the time you’re a tween. And not only that, Kano’s childhood was spent having to hide her love of the shows her generation grew up with—mainly EmerJason, a pastiche of the “Metal Hero” characters of the ‘80s, like Space Sheriff Gavan—from her disapproving mother. So, Kano has to be a “toku-otaku” in secret.

She spends her evenings after work racing home to her tiny flat—decked out with posters and vinyl toys from her favourite Toku series—to watch new episodes of Juushowan, blaming her tiredness to colleagues the next day on what she says was looking over reports for work. She saves her paltry wages up to buy DVD collections of the shows she ends up taking a liking to, masking it at work as being modestly frugal. She dances around conversations where her colleagues mock relatives for liking nerdy things, trying to hide as much of herself as she can to avoid the catastrophic scenario she dreads: being outed as an otaku. 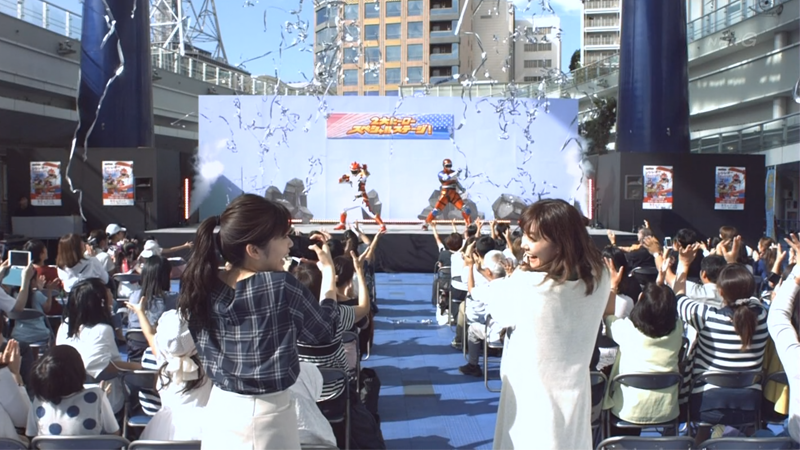 But Kano is also deeply lonely because of her self-imposed ostracism. As much as she wants to push people away just in case they mock her for being a fan of brightly-coloured, animal-themed superheroes like Juushowan’s main star, team leader Shishi Leo, she also desperately yearns to find a friendship where she can express her interests freely, and share them without judgement. Albeit in a brief manner, the series also engages with the issue of gender in nerd spaces. Shows like the ones Kano loves are typically marketed at, and seen as, shows for boys, while cuter series like the Pretty Cure franchise are the “for girls” equivalent, so having its protagonist be female is already an interesting perspective.

But there’s even moments in Tokusatsu GaGaGa where the series interrogates the absurdity of gender-typing shows about superheroes blowing monsters up, from Kano’s fraught relationship with her mother—who expects her daughter to dress and act like a ‘proper’ lady, and prepare herself for married life—or why it’s deemed OK by society at large for women to like cute things like mascot charms as adults, or even the idea (put forward by her female and male colleagues) that the reason Kano does things like work hard or be frugal with her lunch must be to impress a boyfriend they’ve not met, rather than because she’s dedicating her wages to a hobby of her own. Even Kano herself briefly engages with this gender-conformity, when she encounters a hypermasculine shopkeeper she dubs “Mr Yakuza” based on his rough appearance, only to find that he himself is a fan of the cute PreCure stand-in in the show’s world. 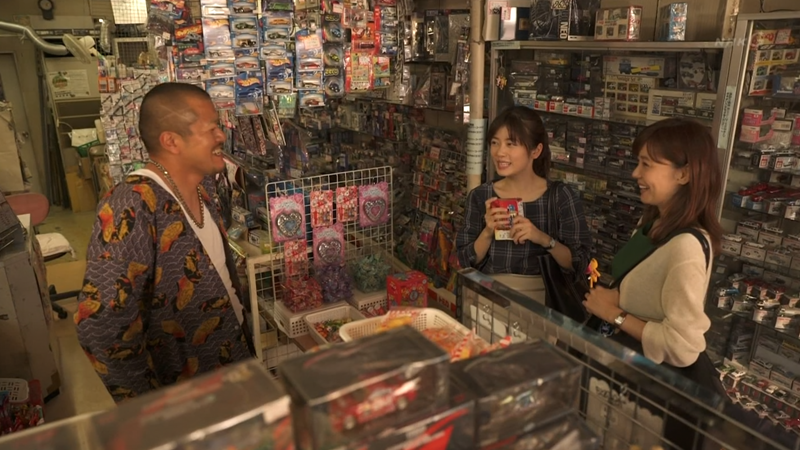 But while Tokusatsu GaGaGa is a primarily comedic show, it’s really an earnestly hopeful one when it comes to Kano’s desire  for acceptance. Kano never regrets being the way she is in terms of liking Tokusatsu—she wholeheartedly believes that the messages these series have instilled in her about helping others, being brave, and fighting for what’s right have made her a better person. Tokusatsu GaGaGa also never really encourages the audience to laugh at her as she attempts to hide her otaku side in increasingly comical scenarios, or freaks out when she spots another woman with a Juushowan charm dangling off of her bag on the train. Instead, it invites us to root for her, whether it’s in running all around town trying to find a candy toy machine that still dispenses the figurine series she wants to collect, or, eventually, when she finds a fellow Juushowan fan in a woman named Yoshida, that she begins to establish a real friendship with.

The relatable desire to connect with people about the media we love, while being a little embarrassed to admit that we love it, is something any nerdy fan can connect with Kano on, because it’s something we’ve all been through, and still go through today even at the height of nerd media’s acceptance within wider popular culture. Tokusatsu GaGaDa puts that struggle at its heart in an earnest and loving manner...

...While also occasionally just turning into a pretty great homage to Spandex-clad superheroes when it depicts Kano’s favourite past time for real as she imagines her favourite heroes inspiring her in life, or even some absurd Tokusatsu villains chasing her as a symbol for her real-life struggles. It’s a lovely, sweet show about being a nerd that also happens to be a pretty great nerd show itself.