Unopened Lunar Samples from Apollo Missions Will Finally be Studied

During the Apollo missions, NASA smartly set aside some lunar materials knowing future scientists would likely be better equipped to analyse them. Now, nearly 50 years later, the space agency is giving a select group of researchers the extraordinary opportunity to study these unopened and untarnished samples.

Nine proposals to study unopened Apollo samples were selected by NASA under its Apollo Next Generation Sample Analysis programme, or ANGSA, according to a NASA Goddard press release. The lunar materials were collected during Apollo 15 (the fourth lunar mission, which began on 26 July 1971) and Apollo 17 (the sixth and final lunar mission, which commenced on 7 December 1972). Some of the returned samples were never opened to prevent possible contamination, while other lunar materials, after some initial processing, were re-sealed and placed in cold storage.

The point of all this was to ensure the integrity of lunar materials for later study, allowing future scientists—equipped with new technologies and new questions—to take a look. Given that no lunar materials have returned to Earth since 1972, this was a remarkably prescient idea.

Among the many goals of the ANGSA programme is to perform work that will inform future lunar missions planned for the coming decades. The researchers will seek to learn if the methods used to store the Apollo materials actually worked, keeping them as pure and untainted as possible. The work will also be relevant to scientists working on the OSIRIS-REx mission, in which samples collected from asteroid Bennu will be returned to Earth in March 2021. 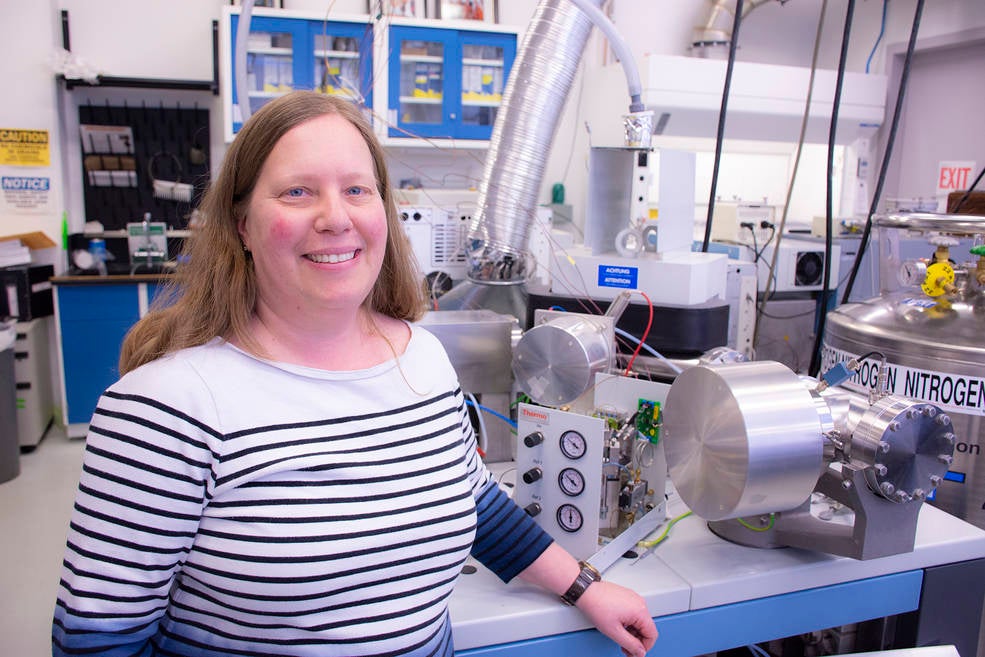 Jamie Elisla at the Astrobiology Analytical Lab at NASA’s Goddard Space Flight Center in Greenbelt, in the US state of Maryland. (Image: NASA/Goddard/Tim Childers)

Astrochemist Jamie Elsila from Goddard’s Astrobiology Analytical Laboratory will lead one of the teams selected for the programme.

“We are searching for small organic molecules that are likely present at very low concentrations in the lunar samples,” Elsila told Gizmodo. “In the past 50 years, our analytical sensitivity has greatly improved, and new methods have been developed to isolate the compounds that we are interested in, giving us an ability for detection that wasn’t possible 50 years ago. It’s really a matter of more advanced instrumentation and methods that let us find and measure these molecules now.”

Elsila’s team will study volatile organic compounds— the precursors to amino acids—in the samples, which are known to exist in the materials based on previous studies. The researchers want to learn if the organic compounds exist at greater quantities in the shadowed regions of the Moon, and whether the abundances of those compounds vary according to depth, among other things.

“This will help us better understand lunar chemistry,” she said. “Scientists were asking questions about organic compounds when the Apollo samples were returned, but our new instruments will help us answer them in ways that weren’t available then.”

In addition, Elsila’s team will examine how the samples might have been affected by the curation procedures used. For example, they’d like to know if storing the materials in a vacuum or in cold storage preserved volatile compounds better than standard conditions, namely storage at room temperature under clean flowing nitrogen. The answers will help in designing curation plans for future returned samples, she said.

Jessica Barnes, a researcher at the University of Arizona’s Lunar and Planetary Laboratory, will partake in this curation investigation. To that end, she will be given access to materials collected during Apollo 17—specifically sample 71036, which contains nearly 4 ounces of rock.

“The question we want to answer is, are we measuring the true Moon signature? Or are there terrestrial influences that have affected the samples during their storage?” said Barnes in a press release. “The beauty of a frozen sample is that it’s been kept curated in a different way from the samples stored at room temperature. We could not do this research without opening the frozen samples.” 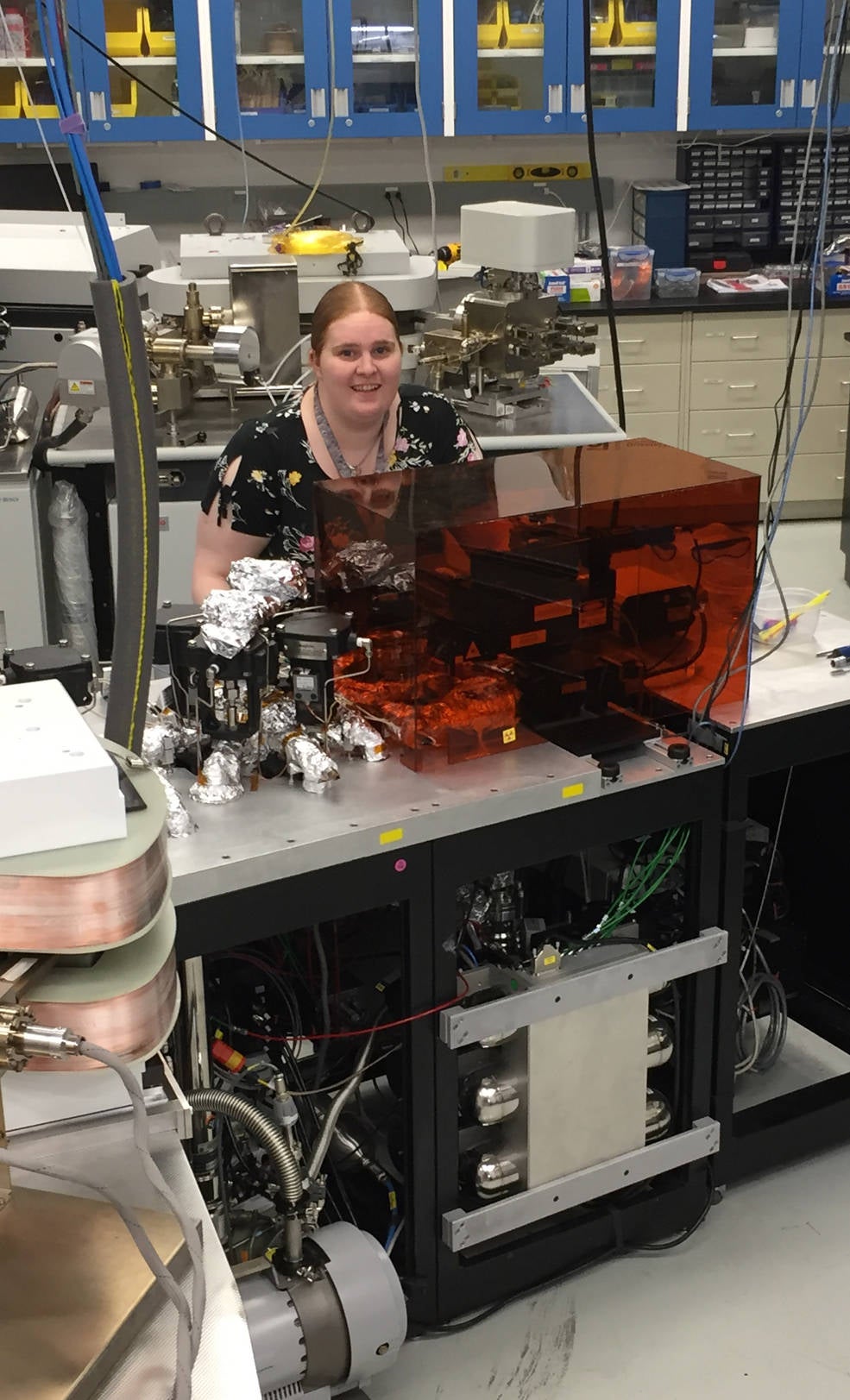 With her UA colleagues, Barnes will embed the rock in resin and slice it into microscopically thin sections for chemical analysis. These slices will also be made available to future researchers.

Another team selected for the ANGSA project will be led by Natalie Curran and Barbara Cohen from Goddard’s Mid-Atlantic Noble Gas Research Lab (MNGRL). They’ll be helped by researchers at the Smithsonian National Museum of Natural History and the Carnegie Institution. By using noble gases, Curran and Cohen hope to learn more about the Moon’s geologic history, such as the length of time the samples—and possibly organic compounds—were exposed on the surface. They’re also planning to study events such as impacts and landslides.

“Getting the chance to work on these samples is like participating in a completely new mission to the Moon,” said Curran in a press statement. “Even though these are Apollo samples, they’ve never been opened, and we don’t know what surprises are in store for us. I’m excited to have a part in our generation’s era of exploration of the Moon.”

Astronauts haven’t been on the Moon in nearly 50 years, but owing to some excellent foresight, scientific research into the Moon can continue. We eagerly await the results. [NASA, University of Arizona]