As much as I like trainers, one problem with the modern running shoe is that after your kicks get worn out, you can’t resole them like you can a nice dress shoe. So inevitably, old trainers end up getting tossed in the trash where they rot in a landfill somewhere for the next few decades or more. However, with some help from its forward-thinking FutureCraft design studio, Adidas has created the Loop, which includes some important innovations that could help reduce waste from shoe manufacturing, even if it hasn’t magically solved the problem yet.

The Loop got its name because instead of being part of a dead-end pattern that sees million of trainers get thrown away every year, Adidas is hoping to create a 100 per cent recyclable trainer that can be manufactured, worn, shredded, and then reborn again as a brand new shoe, over and over again. 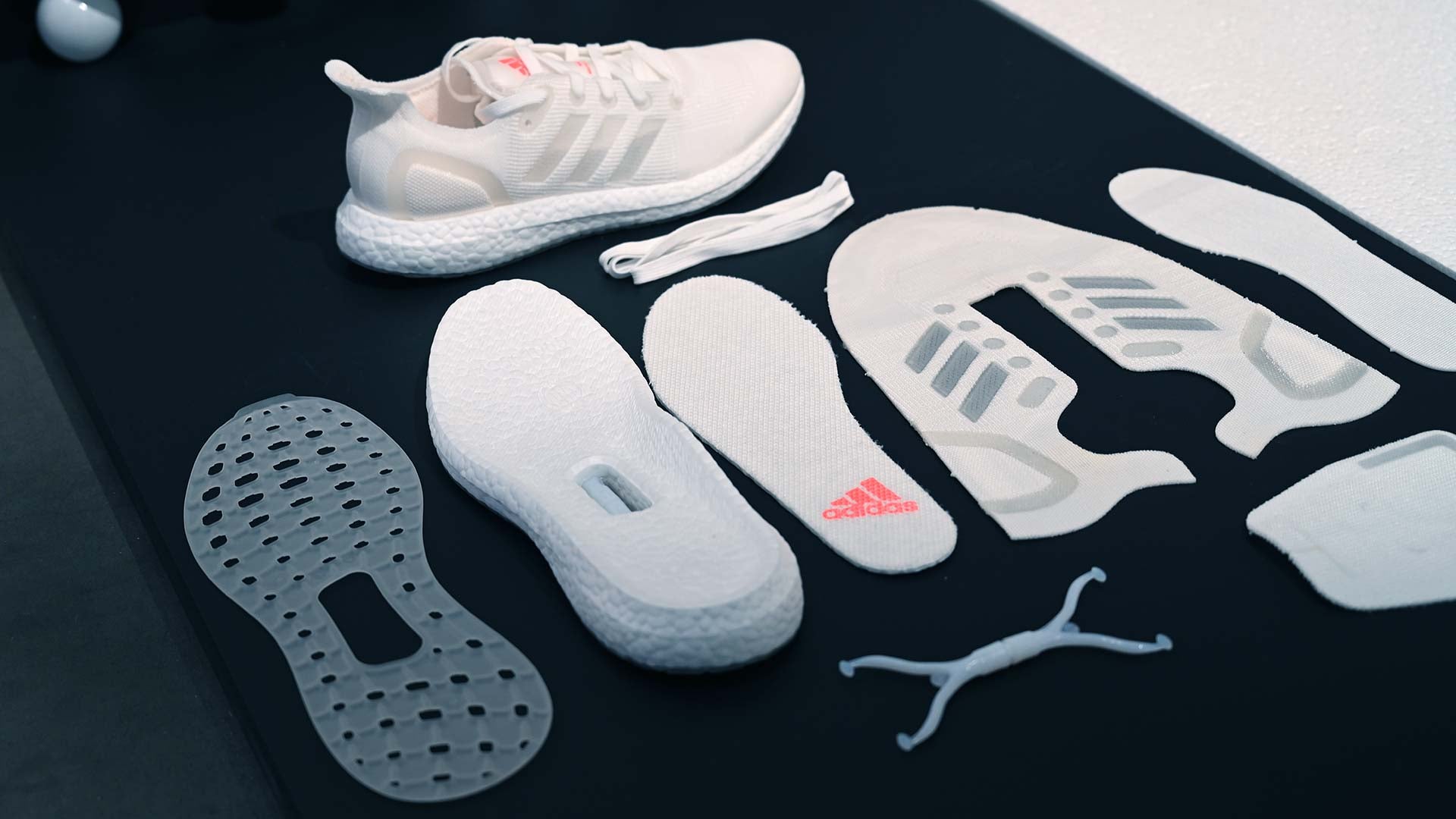 Everything you see here was all created from TPU, including the laces. (Photo: Sam Rutherford/Gizmodo)

This isn’t the first time Adidas has suggested it’s interested in recyclable shoes. Where FutureCraft moves the concept forward is in using a single material to create the entire shoe: The upper, midsole, laces, and even the rigid torsion bar on the bottom are all variations of the same basic material, thermoplastic polyurethane (TPU). Developed by BASF and Adidas, TPU can be transformed into different shapes and textures just by changing the way the material is processed, largely through manipulating heat.

Additionally, no glues or adhesives are used to construct the shoe, resulting in less waste, and making it easier to break down the shoe when it’s time to get to the dirty work of recycling. In the place of adhesives, Adidas is simply using heat to bind various sections of the shoe together.

Here’s a shot of an early Loop prototype next to a more final version. Side-by-side, you can see how much more precise Adidas’ TPU manufacturing got. (Photo: Sam Rutherford/Gizmodo)

Even the translucent “windows” on the Loop’s upper are made from TPU by adjusting the temperature and other parameters of how the TPU is manipulated during creation. (Photo: Sam Rutherford/Gizmodo)

Any longtime Adidas fan will recognise the Boost midsole, which as you’ve probably guessed, is also made from TPU. (Photo: Sam Rutherford/Gizmodo)

Another important thing to note about Adidas’ grand plan, is that unlike other recyclable products that get down-cycled and turned into plastic bottles or used to make children’s playground equipment, the Loop is intended to be up-cycled, meaning materials from the Loop will be reused to make future pairs of shoes and not other products.

Also, for anyone worried about a Zion Williamson-style blowout while exercising, FutureCraft senior director Graham Williamson told me that while the Loop is designed to be more sustainable and environmentally friendly than a traditional shoe, it’s also a piece of high-quality workout gear. That’s why FutureCraft chose to make the Loop a running shoe in the first place: The team knew that once it could create a single-material running shoe that could match the performance of its traditional trainers, more casual shoe styles would be a cinch. 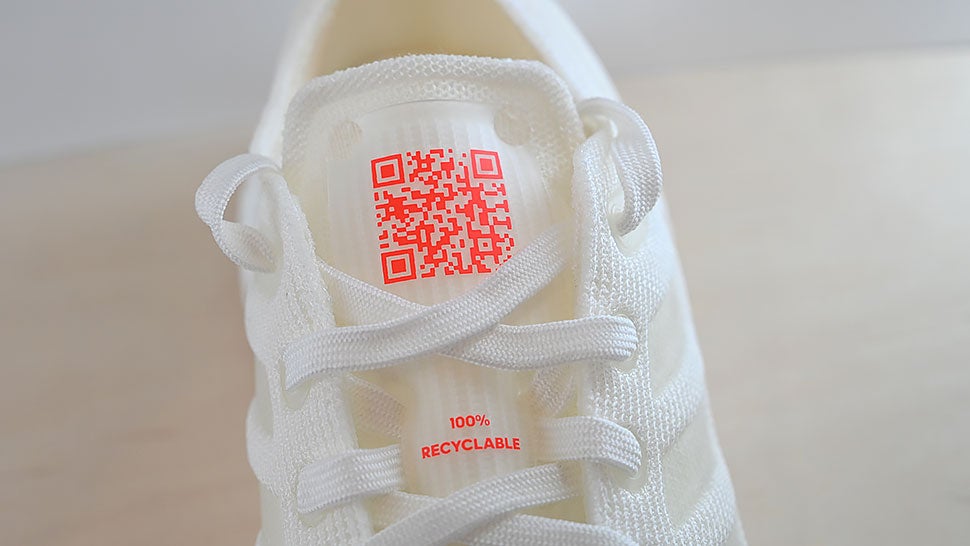 In addition to the Loop’s innovative manufacturing method, Adidas also wants to incentivise owners to take part in its recycling process with a cash reward. While Adidas is still working out the specifics, it’s planning on refunding between $10 (£7.70) and $20 (£15.40) or possibly more to owners for dropping their shoes off at a nearby store or sending them back in to be recycled. And to help remind people when it’s time, owners will even be able to register their shoe in an app using the QR code painted on the shoe’s tongue. 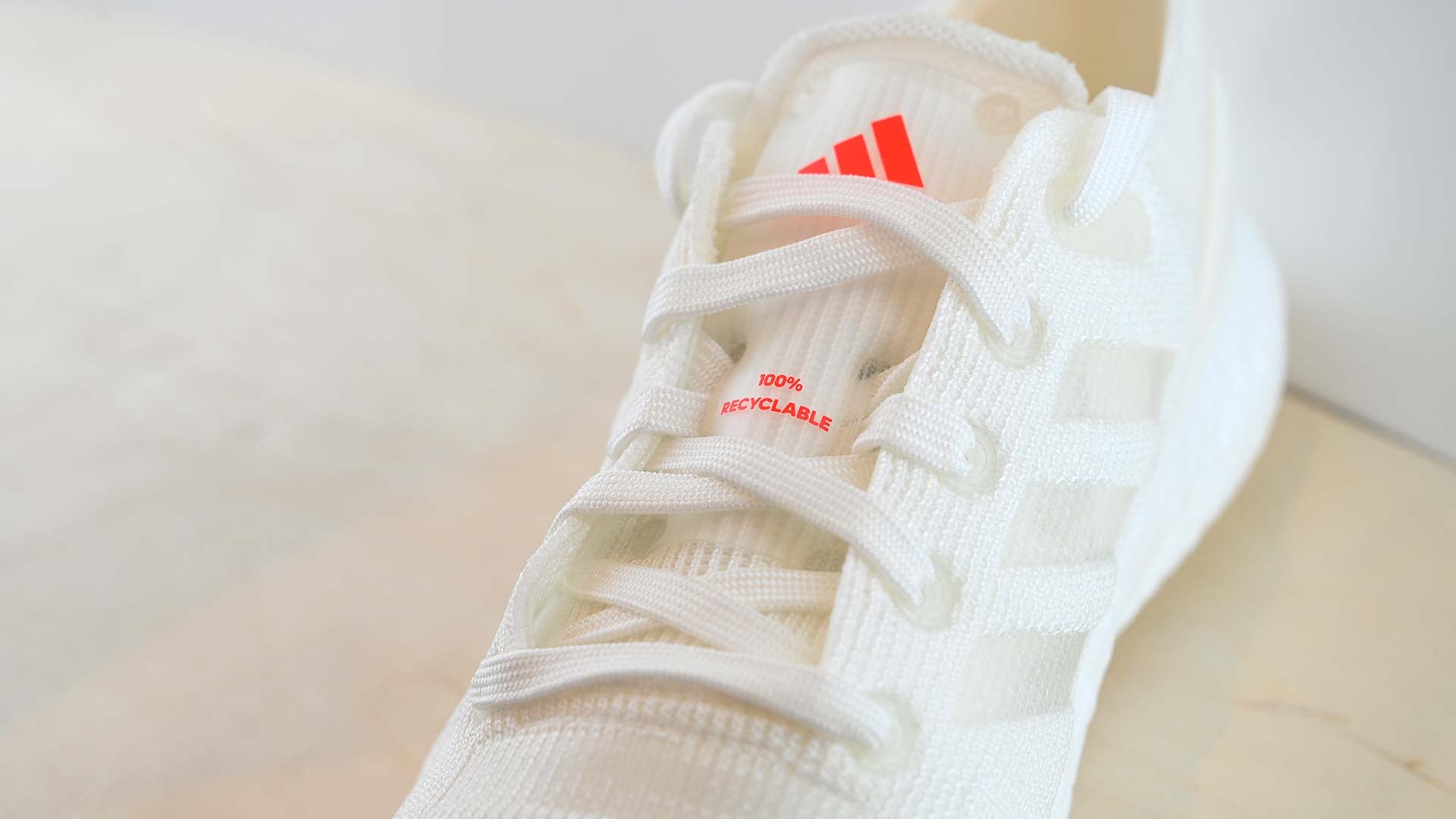 Unfortunately, Adidas is still a ways out from making the Loop 100 per cent recyclable. (Photo: Sam Rutherford/Gizmodo)

However, all of this optimism and innovation comes with a big caveat: While the first-gen Loops are 100 per cent recyclable, right now, Adidas’ recycling process is only able to reuse 5 to 10 per cent of that original material for use in crafting second-generation Loops. The rest of the recycled material will get put to use in making other Loop products.

That’s not exactly what everyone might have in mind when they see the “100% recyclable” tag featured on the laces of the first-gen Loops. But I guess you have to start somewhere, and even being able to reuse the TPU in first-gen Loops to make components such as the outsole, eyelets, and tongue label seems like a promising beginning.

Furthermore, Williamson claims that Adidas already has more recent Loop prototypes with elements of the shoe featuring as much as 50 per cent recyclable content, and if Adidas can increase the amount of recyclable material used in future generations, it may be possible for Adidas to hit or get close to its target around when the Loop officially launches sometime in the second half of 2020.

So what’s going to happen to the Loop between now and 2020? Well, in addition to ironing out its recycling pipeline, registration process, and reward structure for the Loop, Adidas will also be seeding 200 pairs of shoes to lucky owners, who will then become the first testers in Adidas' recyclable shoe project. Testers will be asked to wear the shoe for roughly six months before returning them so they can be shredded, processed, and potentially turned into a brand new pair. 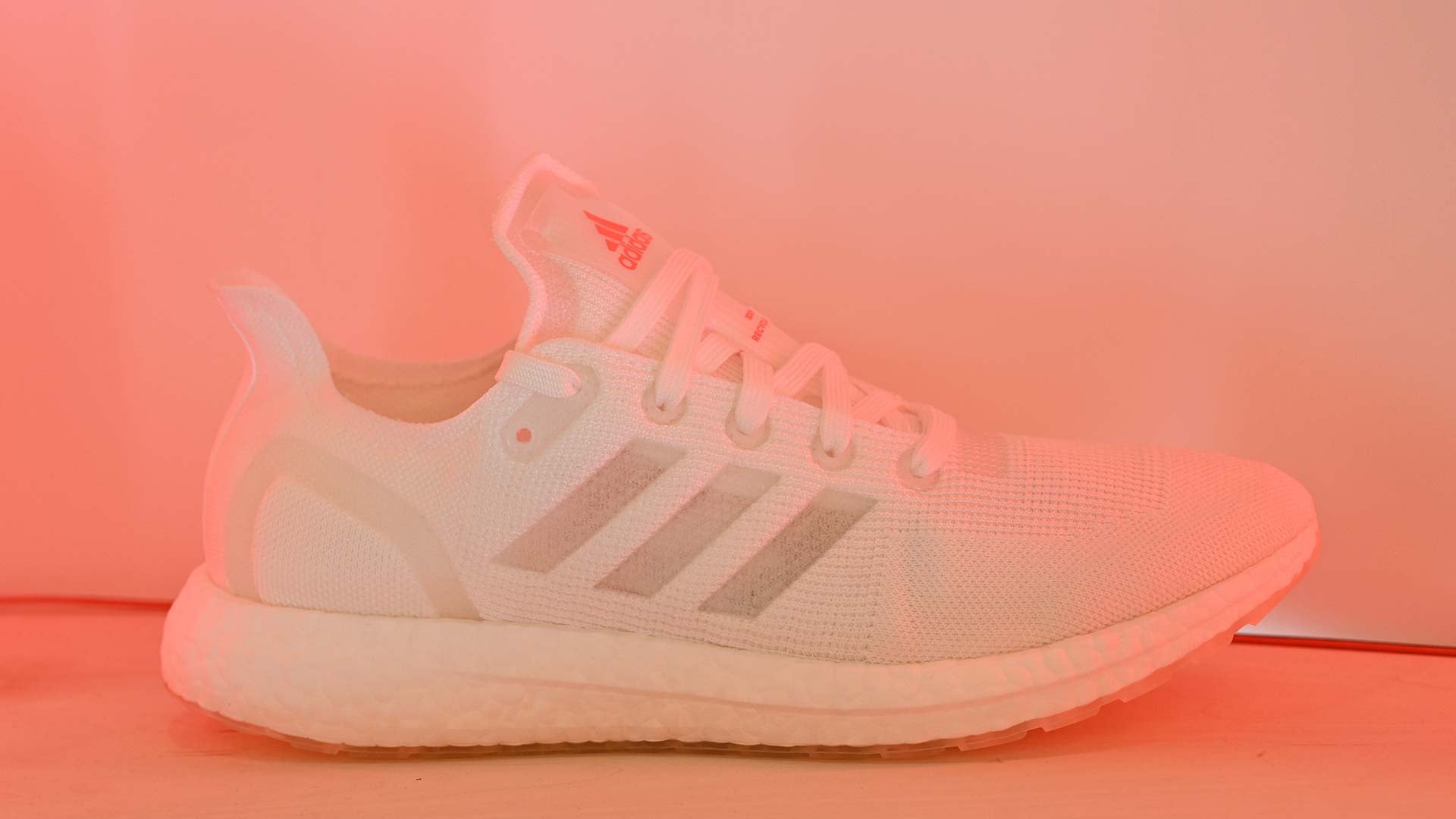 Is this the future of environmentally friendly shoes? (Photo: Sam Rutherford/Gizmodo)

There are a number of significant challenges Adidas will need to overcome before it’s achieved the Loop’s recycling goals, though overall, it seems like a move in the right direction. And with TPU being the material used to create the signature Boost sole found in so many of Adidas’ trainers, if Adidas can nail recycling shoes with the Loop, it could have a major effect on the environmental impact of hundreds or thousands of shoes in the future.