Avengers: Endgame is on the way, and with it, more merchandise than you can shake an Infinity Gauntlet-clad finger at. But as people rush to find meaning out of them, let’s remember that in a world where even the trailers are lying to us, some shiny new toys aren’t going to reveal anything we don’t know already about this movie.

Toy lines rarely actually “spoil” things about the movies they’re attached to—at best, they give us a look at a few characters ahead of time, at worst, they’re any old toy that has nothing to do with a movie, and just has the logo slapped on. But that doesn’t stop people—admittedly, even us—from trying to wring every ounce of meaning out of stuff designed to get you to spend a bit of money on some plastic for your kids (or yourself).

Avengers: Endgame’s new toys are definitely no exception to this rule, and in fact, might be the very purest distillation of it. So with that in mind, what can these new offerings tell us about the movie? Probably very little. And with that in mind, let’s take a look at them all anyway!

Do you like your Avengers in pen topper or cute little vinyl form? (Image: Funko)

What about as key rings? (Image: Funko)

So many pops. Even some out of spacesuits! (Image: Funko)

And then there are the exclusive Pops. (Image: Funko)

Even more exclusive Pops, including the only ways to get Rocket and War Machine for your ‘Oh god everyone’s in a spacesuit’ collection. (Image: Funko)

Ah, Funkos. Like, you just have to have a line of Funko Pops if you have a blockbuster movie these days. I’m not even sure you have to sort out a deal, they just appear on a shelf one day as a fully formed, completely operational marketing behemoth.

There are little Dorbz vinyls! Key chains! Pencil toppers! Blind box figurines! There are even exclusive versions of characters that...are just them in and out those spacesuit costumes! What does it mean that Captain Marvel is the only hero that doesn’t have one of those white spacesuits from the trailers? Probably nothing. Lady doesn’t even need a helmet to travel across the cosmos by the end of Captain Marvel! What would she need one for?

Save for the build-a-figure of Thanos you get for completing the entire wave, literally only two of the figures in this Endgame wave are actually from Endgame: Ronin, Hawkeye’s new identity for a period of the film, and Captain America, once again in that spacesuit. The rest—Hercules, Living Laser, Nighthawk, and Citizen V—are from the comics, and then Ebony Maw is from Infinity War. So before you click on an article with a headline like “Did Hasbro Just Confirm Living Laser Is Totally in Avengers: Endgame???”, the answer is no.

Absolutely not. Don’t be silly.

Lego might be home to my favourite Marvel movie toy “spoiler” ever—Iron Man 3's final battle between Tony and the Mandarin taking place largely around a flamethrower-armed golf cart. Which goes to show that these shiny new sets, as cool as they are (the hall of armours! The nice quinjet!), probably won’t even be actual moments from the film, let alone give us any context.

Perhaps the closest thing to a potential reveal here is the “War Machine Buster,” which basically turns one of Lego’s Hulkbuster models grey and slaps a Rhodey minifigure in it—but it seems like that’s probably an approximation of that burlier version of the War Machine armour we saw in the most recent trailer than perhaps a full-on, giant-robot-sized version of Rhodey’s gear.

That said, as much I desperately want 10 years of post-credit scenes and hushed whispers across so many Marvel movies to culminate in a grand battle in the Avengers’ car park—because that would be hilarious—it’s probably not going to happen.

“What if this defensive tool just so happened to be a gun?” asks the Captain America Nerf Assembler. (Image: Hasbro)

Not content with a shield-gun, Steve also gets a gun-gun. (Image: Hasbro)

Sure, what’s the power of the Tesseract next to... this giant glowing drill thing? (Image: Hasbro)

I love that the Hulk Assembler is just large and green. Like the Hulk! (Image: Hasbro)

How do you incorporate superheroes mostly known for either having very specific weapons or just kind of punching things or shooting laser beams from their hands into a Nerf line? Everyone gets a blaster that they absolutely won’t have in the movie. Hulk? Green blaster. Captain America? Shield blaster, and then an actual blaster with a smaller shield on it for good measure. Black Panther? Dead for at least some portion of the film (but back in time for Black Panther 2), but also: claw blaster. Hell, Ronin, who is characterised by having a sword? 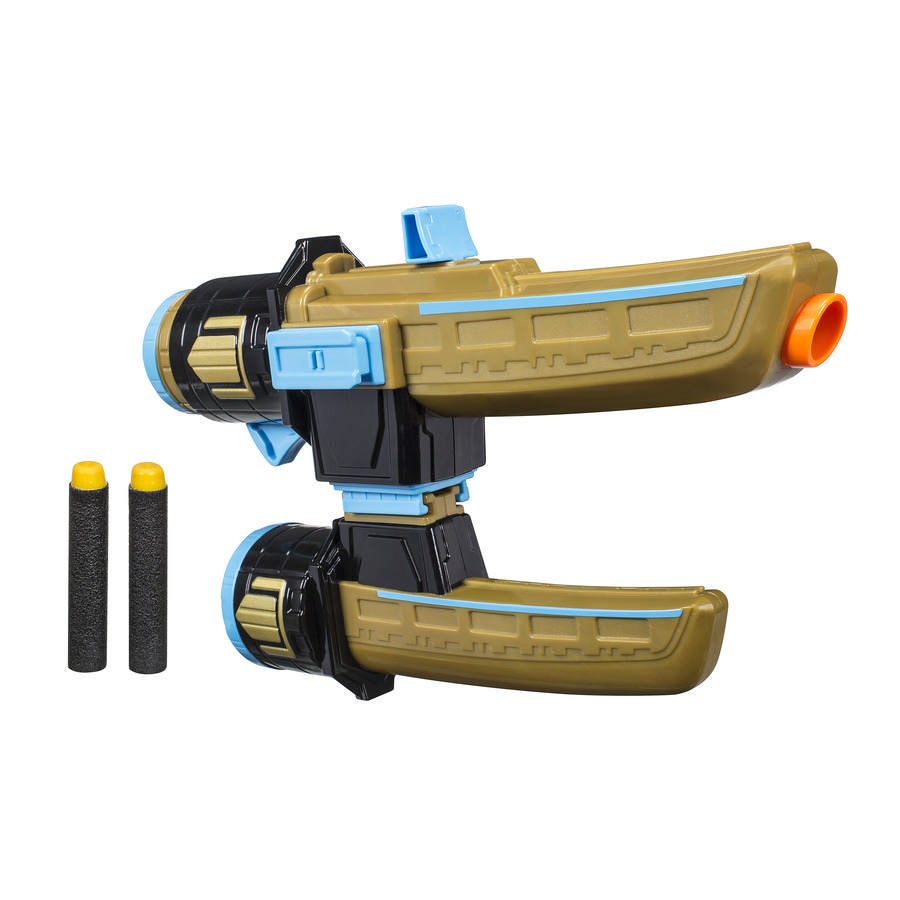 The Ronin Assembler is hilarious. And weirdly phallic. Compensating for something, Clint? (Image: Hasbro)

SWORD. BLASTER. And not even a cool version of that idea. Poor guy.

The cool thing about these completely hilarious toys, however, is the ability to add a truly ridiculous amount of bonus accessory parts to make the Nerf blasters highly impractical but, at the same time, kind of make you feel like Tony Stark cycling through a billion different repulsor weapons in his scrap with Thanos in Infinity War.

Being able to magnetise the shield to your wrist gauntlet is pretty cool. (Image: Hasbro)

No, just because T’Challa’s got some fancy claws doesn’t really tell us something. These are specifically inspired by his own movie. (Image: Hasbro)

Likewise for this foam Mjolnir, based on Thor: Ragnarok. Or like, the first 20 minutes of it, max. (Image: Hasbro)

This Gauntlet is identical to the one released last year, which, while understandable, is kind of rude. Why not sell kids a busted up version like the one we’ve actually seen in the trailer? Kids like broken clumps of metal with gems that don’t light up any more, right? (Image: Hasbro)

Show me an Avengers roleplay toyline without giant Hulk hands, and I will show you a liar. (Image: Hasbro)

Does the fact there’s a foam Mjolnir mean Mjolnir is back? No. It means Hasbro had some Mjolnirs left over from when it did this with the Avengers toys released ahead of Infinity War. Same for that Infinity Gauntlet! At least they denote they’re inspired by past movies on the packaging, in an attempt to cut off speculation immediately.

Black Widow will cost around $58 (£44) in the US when she drops later this month; UK pricing and availability for these figures is TBA. (Image: Bandai/Tamashii Nations)

Iron Man is also $58 and comes out in June. (Image: Bandai/Tamashii Nations)

Ronin is out in May, for the same price of $58. (Image: Bandai/Tamashii Nations)

Captain America will also be out in May, and also $58. (Image: Bandai/Tamashii Nations)

Thanos, meanwhile, is out this month—but breaks the price mould (thanks to being slightly bigger than the rest of the line) by setting you back around $86 (£66). (Image: Bandai/Tamashii Nations)

Lastly, Ant-Man is weirdly a bit less, at around $56 (£43). And it’s not like it’s because he’s smaller. He does come with a smaller version of himself though. (Image: Bandai/Tamashii Nations)

Bandai’s line of hyperarticulated collector figures at least ditches giving everyone a spacesuit, instead balancing some tweaks of already familiar figures (like Captain America, Iron Man, and Ant-Man, all borrowing looks from prior figures, albeit with some updates face sculpts), with new figures based on Black Widow’s Endgame appearance—right down to the weird two-tone hair—Ronin, and our best look at Thanos’s armoured gear from the movie.

Will he have that giant double-bladed sword he has in all the merchandise? Who can say? But does Thanos even need one at this point?

For £10 you can have one of these basic Endgame action figures from Hasbro—I hope you like spacesuits. (Image: Hasbro)

The Titan Hero PowerFX figures all feature projectile-shooting calamities that are almost assuredly not in the film. They can be yours for £25 apiece though. (Image: Hasbro)

So many many spacesuits, so little time. I’m starting to get the feeling that Hasbro got to see as much of Endgame as we have, and so everything is a sea of spacesuits. Except for Captain Marvel again, but I guess technically she is already wearing a suit that can go out in space, so there we go! These basic action figures actually give us a better look at Rhodey’s non-space-suited appearance at least, and although the new War Machine armour is definitely bulky, it doesn’t seem as Hulkbuster-y in scale as Lego’s interpretation.

Marvel’s desire to obfuscate as much about Avengers: Endgame as possible has made for cryptic trailers that dance around revealing even the barest of details of the movie (and even then, we can’t trust those trailers not to be full of doctored footage), posters that can be jaw-dropping news simply by covering a character in greyscale or not, and even the revelation of its title as its own wild event. It stands to reason then, that the reveal of all its merchandise would, in turn, set the internet ablaze with speculation about just what this Funko Pop, or this action figure, could possibly mean in the grand scheme of it all.

The answer, as you might have been able to figure out by now, is not a lot. But hey, at least there’s plenty of fun toys to pick up while you count down the days until you can actually see what’ll happen in Avengers: Endgame when it hits cinemas on 26 April.