Best known for its vacuums, in recent years Dyson has expanded its lineup with products that have nothing to do with cleaning. The Lightcycle smart lamp ventures furthest from the company’s typical products. It’s a masterpiece of engineering, but in true Dyson fashion still comes with a staggering £500 price tag.

What is it?: A smart lamp that will automatically adjust the light to match what's outside.
Price: £500 for the desk version, £650 for the floor model.
Like: Impressively over-engineered.
Dislike: I actually needed to reboot it a couple of times to get it turn on.

It’s long been debated whether or not Dyson’s products are worth the premium. The company’s first bagless “cyclone” vacuums brought some much-needed innovation to a category that really hadn’t seen any in decades, and Dyson’s vacs genuinely outperform the competition. The same can be said for Dyson’s Supersonic hair dryer. At £300, it’s expensive, but after trying it, we walked away impressed.

The Dyson Lightcycle is a different story. Created by Jake Dyson, the company founder’s son, it’s the descendant of a $900 (£692) LED task lamp that was first released in the US back in 2012. Now targeted towards a larger audience, the Lightcycle includes a handful of new features—not just a striking design—to help consumers justify splurging £500+ on the hardware, including automatic colour temperature adjustments, a handy USB-C port for charging, a boost function for an extra kick of brightness when needed, and even the ability to slowly turn on and wake you in the morning like your own personal sun.

The Lightcycle lamp is designed like a miniature version of a tower crane you’d find on a construction site. A thin vertical tower supports an equally thin horizontal arm where you’ll find the lamp’s actual light source perched on the end—and it’s all held up by a heavy base that can rotate 360 degrees. A counterweight allows the entire arm structure to be raised and lowered, while spring-loaded wheels facilitate its ability to slide side to side. Everything’s in perfect balance, so moving the arm in either direction feels smooth and fluid.

If you’ve ever looked up at a towering construction crane and thought to yourself, “what a perfect design for a lamp,” then Dyson’s got you covered. (GIF: Andrew Liszewski/Gizmodo)

The Lightcycle’s base is heavy to prevent topples, and can infinitely spin 360 degrees. It also features a single USB-C port for charging or powering other devices and gadgets. (Photo: Andrew Liszewski/Gizmodo)

A counterweight on the opposite side of the vertical support helps the horizontal arm move smoothly up and down, while a spring-tensioned wheel does the same for side to side movements. (Photo: Andrew Liszewski/Gizmodo)

The Lightcycle’s six LEDs can be manually controlled using a collection of touch-sensitive controls, including two slider strips for adjusting the intensity of the light and its colour temperature. However, they’re not very large and trying to make small adjustments can be almost impossible. On the underside of the Lightcycle’s head, you’ll also find three additional buttons for activating features like a motion sensor that automatically turns the light on and off when you leave or approach your desk.

At the end of the horizontal arm, you’ll find the lamp’s LED light source, which can be manually operated using a pair of touch-sensitive strips that control the brightness of the illumination and the colour temperature, or a touch-sensitive button to turn it on and off. (Photo: Andrew Liszewski/Gizmodo)

Automated features like a motion-sensing on/off function can be controlled using a trio of buttons on the underside. (Photo: Andrew Liszewski/Gizmodo)

A copper tube connected to the Lightcycle’s LEDs serves as a heatsink, ensuring colour accuracy and improving their overall lifespan. (Photo: Andrew Liszewski/Gizmodo)

Running down the middle of the lamp’s horizontal arm is a sealed copper tube that serves as a heatsink for the LEDs. Inside it is a single drop of water that vaporises and condenses in a continuous cycle to keep the LEDs cool, which Dyson promises will significantly expand their lifespan, and will help ensure they maintain an accurate colour temperature. It’s another feature that sounds neat when you read about it, but not necessarily something you need in a lamp. In a way, it feels like engineering for engineering’s sake.

Over the course of a day, the Lightcycle lamp will automatically adjust its illumination to match the light outdoors. (GIF: Andrew Liszewski/Gizmodo)

To take advantage of all the Lightcycle’s functionality you’ll want to connect it to Dyson’s free mobile app. But unlike some of Dyson’s other products such as its fans, heaters, and robovacs, the lamp connects to the app over Bluetooth instead of wifi, which unfortunately limits your ability to control it remotely. However, the app is the only way to take full advantage of the Lightcycle’s namesake feature. During setup, you specify your location and the lamp will automatically adjust its colour temperature throughout the day to match what’s going on outside. For those stuck at a desk all day, it’s supposed to help create a connection to the outdoors and make office life feel slightly less dreary.

It certainly works, but I found that, at least for my location, the light tended to stay closer to a cooler temperature throughout the day, while I preferred it much warmer. I found myself skipping the automatic light tracking feature altogether and just dialling in my own setting. Thankfully, the manual brightness and colour temperature controls inside the Dyson app offer more precise fine-tuning than the physical sliders do. 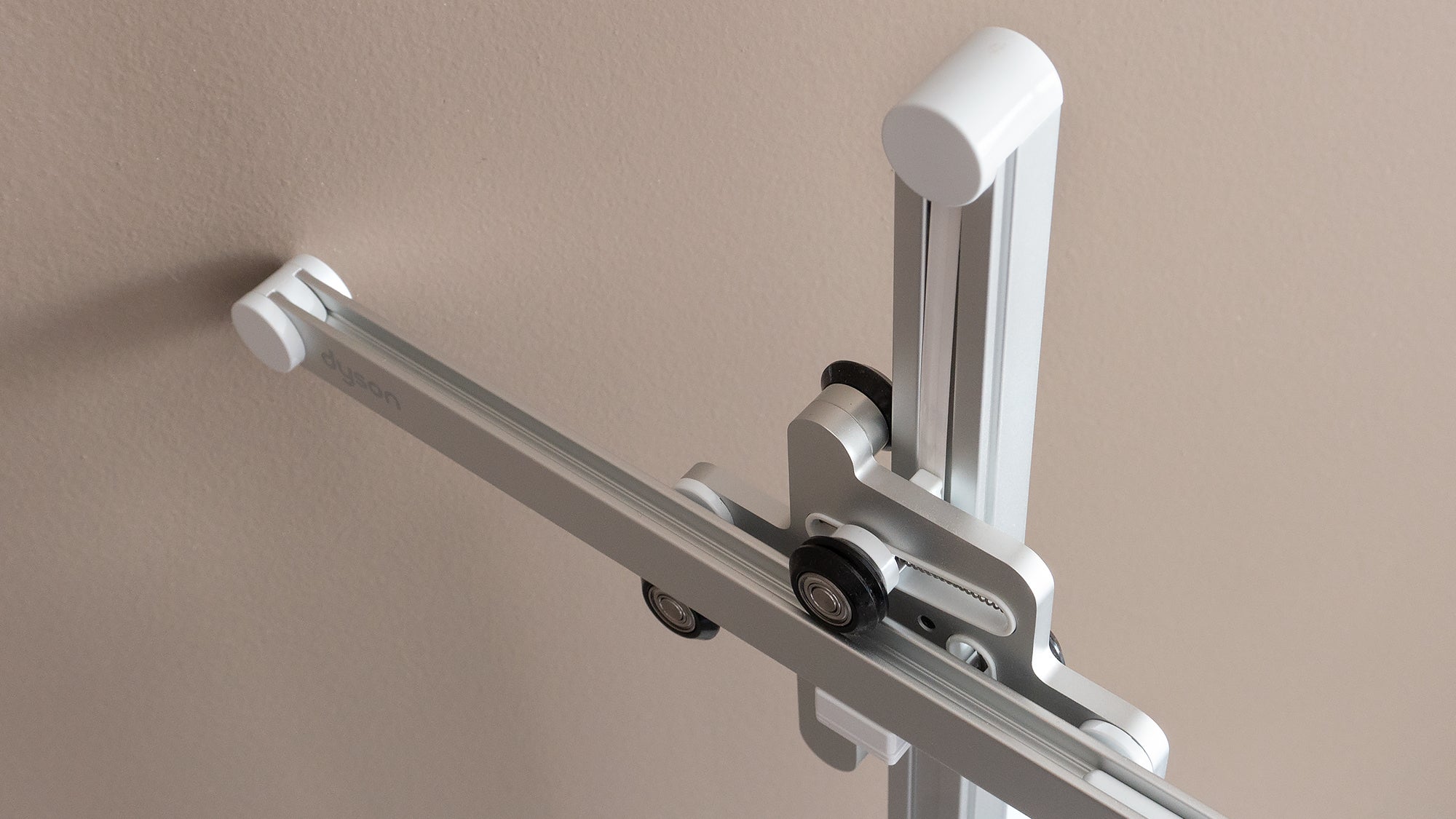 Placing the Lightcycle close to a wall dramatically limits how far its arm can be moved. (Photo: Andrew Liszewski/Gizmodo)

During my testing, I came across a few other problems that made that £500 price tag harder and harder to justify. For starters, the Lightcycle is specifically a task lamp, designed to focus its illumination down on a workspace. It’s not great at lighting an entire room, so more often than not I’d find myself switching to my £16 Ikea Årstid lamp instead. My desk is also pushed right up against a wall, which meant that I could only retract the Lightcycle’s arm so far before it literally hit the wall.

Most concerning of all is that the Lightcycle is not only the first lamp I’ve ever used that requires occasional software updates, but also the first lamp I’ve ever had crash on me. I’m used to occasionally having to reboot my smartphone when it starts behaving strangely, but on one occasion, the Lightcycle refused to turn on, via the app or its physical buttons, requiring me to physically unplug it from the wall and plug it back in to perform a full reset and get it working again.

Is this a lamp for the average consumer? No. Swap a colour-changing, wifi smart bulb into a cheap desk lamp, and you’ll be able to recreate most of the Lightcycle’s features at a fraction of the cost. And if you’re longing for the sun, just take a break from work and go for a walk outside. Would I recommend it to anyone then? Aside from startups hoping to lure investors with a fancy office, the Lightcycle is a very good task lamp. If you spend a lot of time working with electronics, or work in graphic design or photography and often have to colour-proof prints, the Lightcycle’s even lighting, precise colour adjustments, and manoeuvrability just might make it a worthwhile investment. The rest of us don’t need to spend £500 on it.