For Sale: A Giant Bird With Beautiful Eggs (That Murdered Its Previous Owner)

An auction house in the US state of Florida is reportedly fulfilling the final wishes of an exotic animal collector by selling off his menagerie of about 100 animals, including the one with knife-like talons that took his life.

On 12 April, Florida resident Marvin Hajos fell between two pens containing cassowary birds. Flightless creatures that can stand up to six and a half feet tall, cassowaries have strong legs and three-towed feet, each with a claw that can grow up to five inches.

That claw is likely what Hajo’s cassowary used to kill him. “It may be they saw him fall and had an opportunity and decided to attack,” Taylor, deputy chief of Alachua County Fire Rescue, told the New York Times.

Rescue respondents arrived at Hajo’s property and found him fatally injured between the two cages. The cassowary was still riled up. “The bird was obviously agitated and was trying to come at them through the fence,” Taylor told the Times. “A couple of people from our crew had to dodge the bird themselves.”

Death investigator Bill Grotjahn examined the incident and determined Hajos died from bird-inflicted trauma. “I’ve been doing this for 18 years and I’ve never had a thing like this,” he told the Times. “I’ve had them killed by alligators and snakes but never by a bird like that.”

But the rarity of cassowary-caused deaths in the US is likely due to their scarcity there—the bird is indigenous to Southeast Asia and Australia—not because they’re not a threat to humans.“Cassowaries are an extremely, extremely dangerous bird,” Grotjahn told the Times. “You don’t want to fool around with them. They have no sense of humour.”

According to the San Diego Zoo, the “cassowary is rightfully considered the most dangerous bird in the world.”

Grotjahn also told the Times he believes Hajos may have been trying to check on the cassowary eggs at the time of his death, triggering the female to lash out and protect its clutch.

Now anyone who wants to risk their life to cultivate their own emerald green cassowary eggs will have a chance to buy the very bird that killed Hajos. 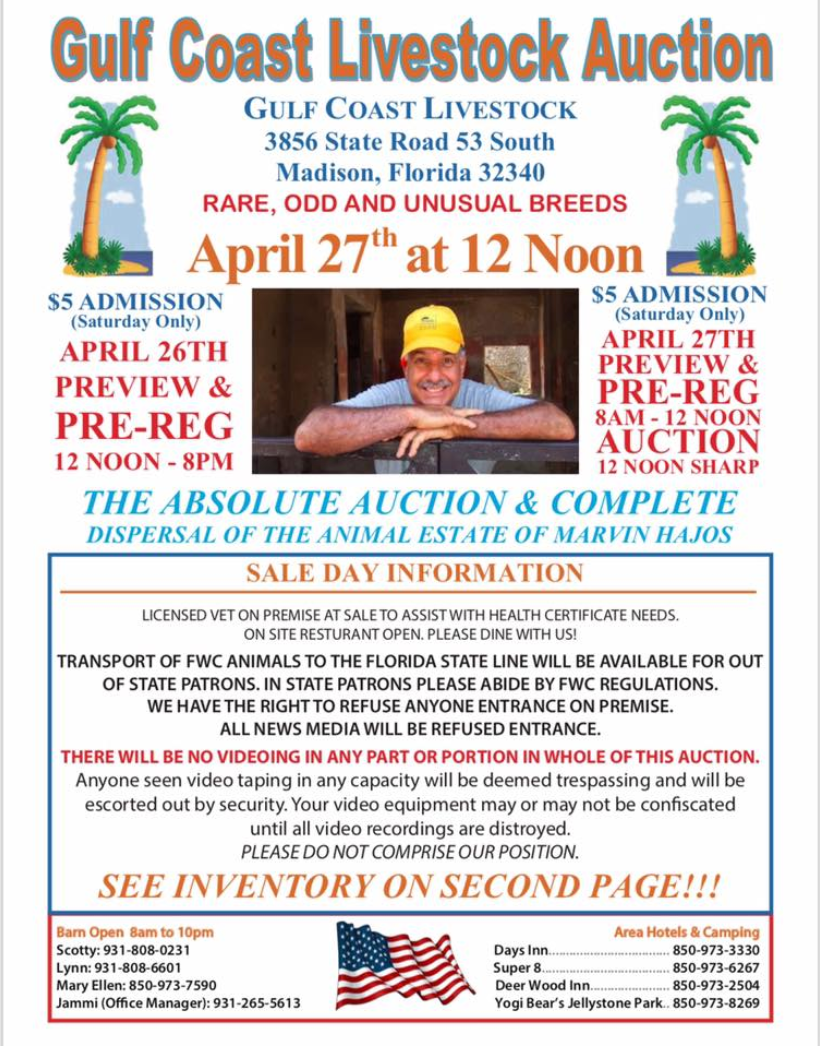 On 27 April, Gulf Coast Livestock Auction is selling off the collector’s entire inventory, including two cassowaries, 26 marmosets, five lemurs, and 19 macaws. The auction group’s Facebook page provides a list of all animals that will be sold.

The company is billing the event as the “absolute auction and complete dispersal of the animal estate of Marvin Hajos.”

Anyone can attend the auction, but an advertisement for the event makes it clear that “news media will be refused entrance,” and anyone who is caught filming the auction will be considered trespassing. “Your video equipment may or may not be confiscated until all video recordings are distroyed [sic],” the flyer reads.

A representative of the auction group told the Times that Hajos desired all his animals to be sold upon his death. [New York Times]