During the Early Cretaceous, a small two-legged dinosaur walked across a stretch of fine-grained mud following a rainstorm. The resulting footprints became locked in stone, but unlike other fossilised dinosaur tracks, these 120-million-year-old fossils show skin impressions across the entire footprint, in what is considered an unprecedented discovery.

Fossilised dinosaur footprints are fairly common in the pale ontological record, but a mere 1 per cent of these tracks exhibit evidence of skin. Of these, none have been found to preserve evidence of skin across the entire footprint—until now.

New research published in Scientific Reports is “the first report for any dinosaur of skin traces that cover entire footprints, and every footprint in a trackway,” according to the authors of the new paper. The impressions, made by bipedal dinosaur known as Minisauripus, represent the “highest resolution of detail yet recorded for any dinosaur skin impressions,” noted the researchers, a team led by Kyung-Soo Kim of South Korea’s Chinju National University of Education. (To be clear, the name Minisauripus isn’t used to describe a specific species of dinosaur, but instead is an ichnotaxon, a name that categorises distinct trace fossils like footprints.) These incredible footprints were pulled from the Jinju Formation of Korea, and they’re embedded on a slab of very fine grey sandstone with a thin layer of black mudstone on top. The new paper describes four distinct tracks along a single pathway, plus an isolated fifth track from an unconnected slab. These surfaces were traced on clear acetate film, photographed with low-angle light, and measured to the nearest millimetre.

Each footprint is only about an inch long, but they all contain perfectly preserved impressions of skin. At an estimated age between 120 million and 112 million years old, they’re now the oldest Minisauripus tracks in the fossil record.

Special environmental conditions allowed for the footprint to appear without smearing. The little dino walked across a thin layer of fine mud that was similar to “a coat of fresh paint only a millimetre thick,” Martin Lockley, a palaeontologist from the University of Colorado Denver in the US and a co-author of the new paper, said in a statement. This proved to be a perfect medium for recording the animal’s skin texture. What’s more, the sticky surface prevented the dinosaur from slipping or sliding on the surface, which would have ruined the integrity of the print. 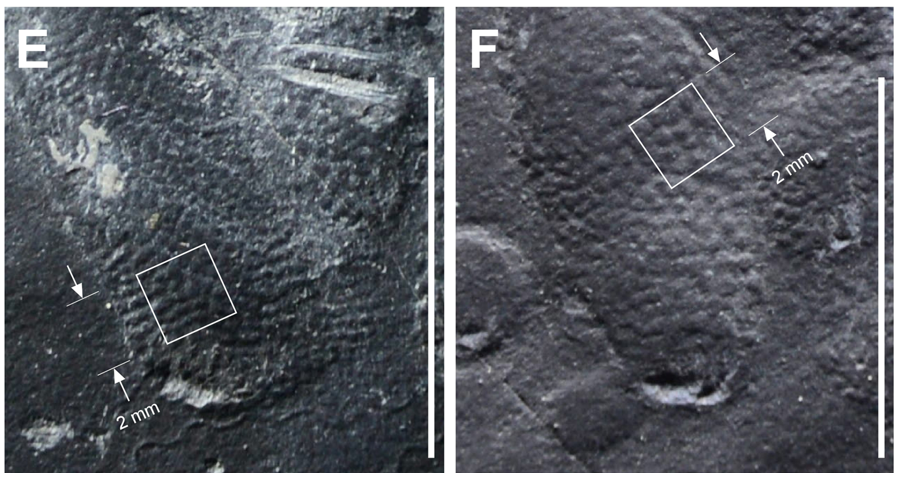 Indeed, the level of detail in these impressions is nothing short of extraordinary, and it’s hard to believe they were made so long ago. Arrays of small scales, each less than half a millimetre wide, cover the entire surface of the dinosaur’s tiny feet. The tiny scale traces, described as polygons in the new paper, together look like woven fabric. The researchers said the pattern is similar to those seen on some feathered Cretaceous birds from China, but the shape of their feet is very different. Also, the patterns are similar to, though considerably smaller than, those seen in the partial footprints left behind by larger dinosaurs, such as the brontosaurus. The “size of polygons in skin ornamental is proportional to track size,” wrote the authors in the paper.

Based on the stride length and size of the footprints, the authors estimate a body length for this particular individual at 28.4 centimetres (11.2 inches). The dinosaur made long strides as it swiftly moved across the muddy surface at speeds reaching 2.5 metres per second (5.5 miles per hour). Human walking speed is about 1.4 metres per second, or about 3.1 miles per hour.

An interesting feature seen in the new prints is how Minisauripus’ skin stretched between its toes. The “looseness and flexibility of the skin may have been a factor in allowing it to spread when contacting with the [mud] so as not to shift or slide and smear the fine skin traces as they were registered,” wrote the authors in the study.

Another neat aspect of the discovery is that the researchers were able to detect impressions of rain drops in the fossilised mud, allowing them to do some Cretaceous period meteorology, as noted in the UC Denver statement:

Evidence shows that, just before the tracks were made, there had been a rain shower leaving water-drop impressions. In one place, the dinosaur had stepped on a fresh rain drop mark, proving rain came first, and the dinosaur step came second. All this delicate evidence was preserved by being gently covered with more fine mud.

Palaeontologist Eugenia Gold from Suffolk University, in the state of Massachusetts, said the information gathered from these impressions make our interpretations of dinosaur skin more complete.

“Even though tracks from this [species] have been found in China and Korea before, these new tracks show skin impressions across the whole footprint, which is very rare and an exciting find,” explained Gold, who wasn’t involved with the new study, in an email to Gizmodo. “Additionally, the tracks are older than the other known tracks for this [species], showing that this species was around 10-20 million years before we previously thought.”

An incredible discovery, for sure, and an excellent demonstration of how fossils other than bones can shed new light onto these ancient mysteries. [Scientific Reports]