Earlier this month, the Hayabusa2 spacecraft used an explosive device to create an artificial crater on the Ryugu asteroid, but the probe couldn’t stick around to confirm the job for fear of being damaged by debris. The Japanese space agency has now confirmed the artificial crater—but it’s not exactly what they expected.

Yesterday, while flying at an altitude of 1,700 metres (5,500 feet) above the Ryugu asteroid, the Hayabusa2 probe used its optical navigation camera (ONC-T) to confirm the presence of a surprisingly large artificial crater on the surface. Given the rocky composition of the area, JAXA scientists were expecting something a bit smaller, so the exercise is already telling us something new about this asteroid and how it formed.

On 5 April 2019, Hayabusa2 used an explosive device to blast a crater onto the surface of Ryugu. Images taken by the probe showed the explosive device, about the size of a baseball, slowly descending to the surface. JAXA, fearful that the probe would be damaged by the ensuing debris, hid the probe behind the asteroid for about two weeks while the dust slowly settled in the low gravity environment. With Hayabusa2 out of harm’s way, however, JAXA was unable to confirm the presence of an artificial crater or its size.

To prove that Hayabusa2 got the job done, JAXA had the probe fly over the site from 23 to 25 April. Images collected by the probe allowed the space agency to finally confirm the hole. It is “determined that the collision device generated a crater,” noted JAXA in a press release. With the crater now confirmed, Hayabusa2 is now returning back to its home position, approximately 12.4 miles (20 kilometres) above the surface. 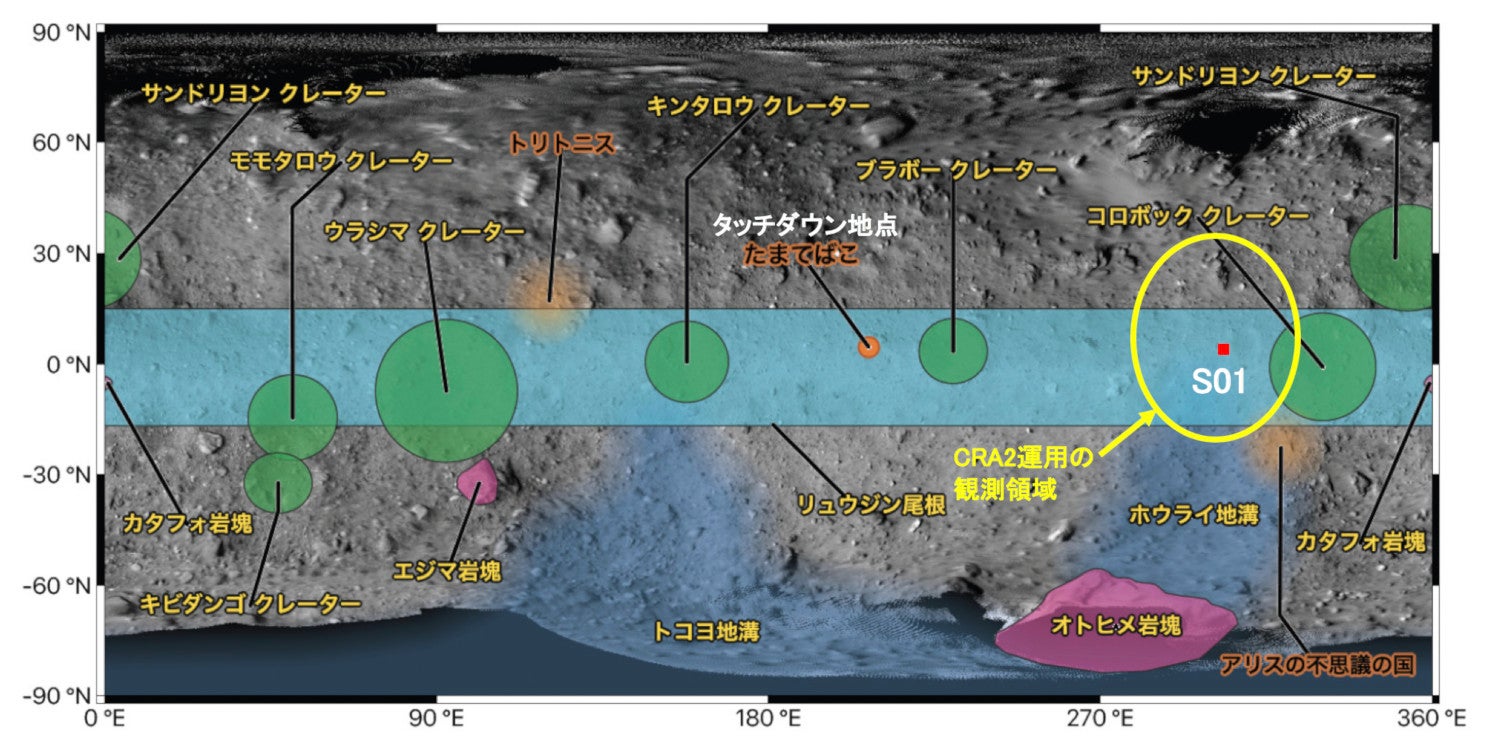 A map of Ryugu, with the small red square, designated S01, the site of the artificial crater. (Image: JAXA)

“Creating an artificial crater with an impactor and observing it in detail afterwards is a world-first attempt,” said Hayabusa2 project manager Yuichi Tsuda while speaking to reporters yesterday, as reported by AFP. “This is a big success.”

NASA’s Deep Impact blasted an artificial crater onto comet Tempel 1 on 4 July 2005. The difference in this case is that Hayabusa2 will now attempt to extract materials from within this new crater, whereas Deep Impact was only able to conduct observations.

Hayabusa2's explosive device should have pulled up material from deeper within the asteroid, which will provide new insights into the formation of asteroids and other celestial objects in the Solar System. Earlier in the mission, the probe scooped up material from the very top of the asteroid’s surface. The probe is expected to return to Earth with its samples—both from the surface and subsurface—in late 2020.

Going into the mission, and after evaluating the target area on the surface, JAXA scientists expected an artificial crater between 2 and 3 metres (6.5-10 feet). Unexpectedly, however, the new crater appears to be around 10 metres (nearly 33 feet) across, with the total affected area measuring around 20 metres (66 feet) wide. As noted in the AFP report, a loose, sandy surface was expected to produce a crater of that larger size, but the target region was rocky and littered with boulders.

“The exact size and shape of the formed artificial crater will be examined in detail, but it can be seen that the topography of the area about 20 [meters] wide is changing,” noted JAXA in a tweet. “It was not assumed that such a big change would occur, so there was a lively debate in the project. It looks like we can expect new advances in planetary science.”

Masahiko Arakawa, a Kobe University professor working on the project, said the “surface is filled with boulders but yet we created a crater this big,” reported AFP. “This could mean there’s a scientific mechanism we don’t know or something special about Ryugu’s materials.”

JAXA will continue to study the photos gathered by Hayabsua2 over the past couple of days to learn more about the new crater and to refine their estimates. Following this, the space agency will direct the probe to collect material from within the crater, in what will undoubtedly be a very delicate and precise operation—but one potentially made easier given the unexpected large size of the hole.