Wood-boring clams don’t look like the ones you or I might find steamed with pasta. They’re smaller than a pea, and live exclusively in the deep ocean, tunnelling into sunken, waterlogged trees that were swept out to sea long ago to eat the wood. Now, scientists have determined that there are quite a few more groups of these bizarre molluscs than we thought.

These termites of the sea are among the only animals that can digest wood, and much of their biology is oriented around this lifestyle. Out one end of a rounded, compact shell is a long tube that extends up through a borehole. This fleshy “siphon” allows the clam to breathe, while also giving it an undeniably phallic appearance. The clam’s other end houses a powerful muscle that it uses to anchor to the bottom of its borehole. By shifting back and forth, the clam scrapes the walls of its woody tunnel with sharp teeth on its shell. 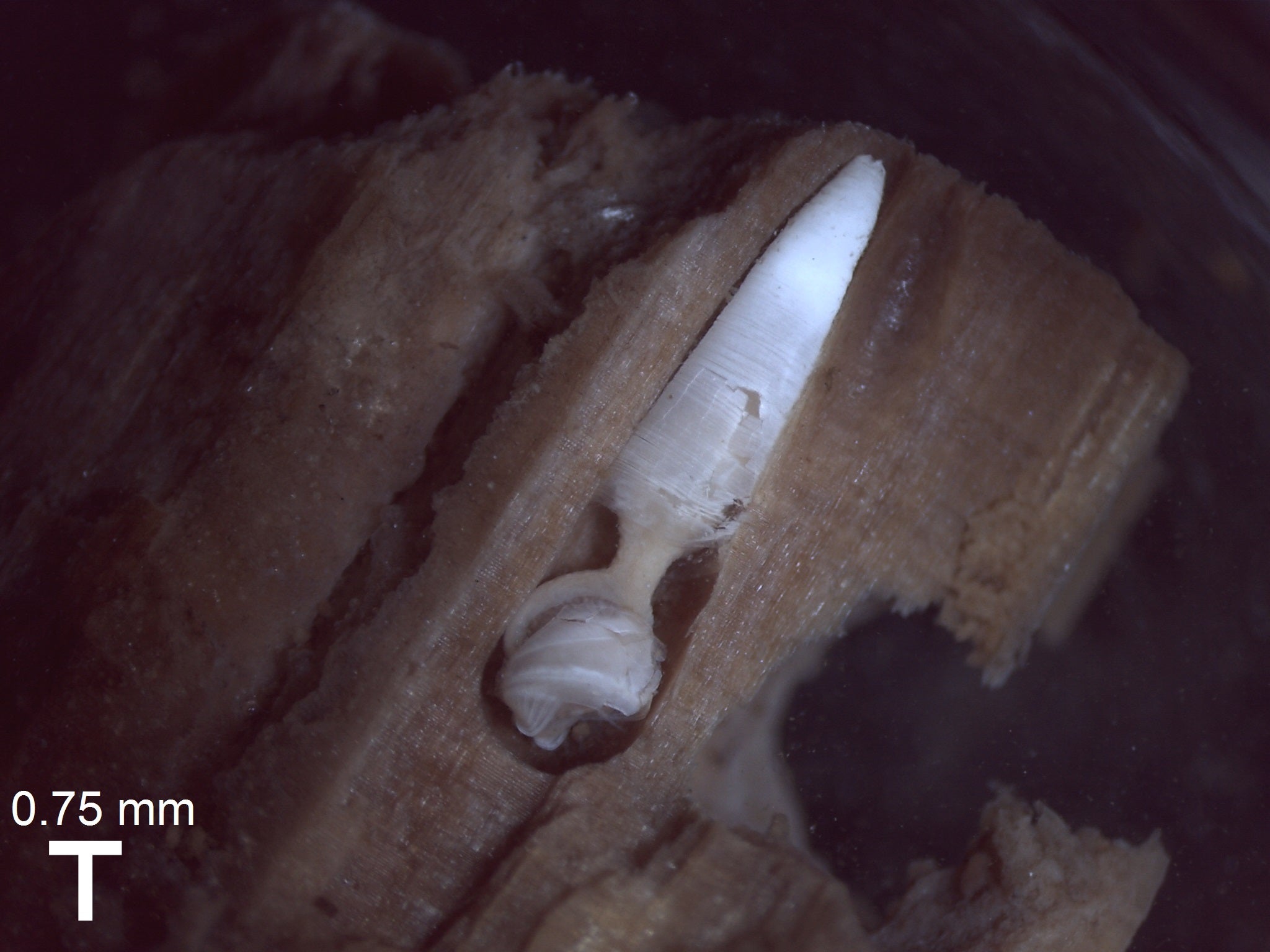 A wood-boring clam inside a piece of wood (Photo: Jenna Judge)

“That abrades the wood, just a little bit, but because that wood is waterlogged, it scrapes up really easily,” said Janet Voight, curator of zoology at Chicago’s Field Museum in the US and lead author on the study published Tuesday in the Journal of Molluscan Studies. “Waterlogged wood is pretty soft, you can kind of gouge into it with your thumbnail.”

The clam then gathers up and eats these wood shavings, which it breaks down with the help of to enzymes provided by special bacteria in its gills.

Very little is known about these mysterious, penis-shaped wood munchers, given their deep sea residency. To understand their kinships more completely, Voight and her colleagues analysed and compared the DNA from 59 different wood-boring clams preserved in museum collections. By including DNA data from other species in databases, the team was able to figure out how the species were grouped together.

They found that there are at least six genera (groups of species) of wood-boring clam—twice as many as originally thought—and about sixty different species altogether. The team even described a totally new genus and species of wood-boring clam, Spiniapex gilsonorum, found off the coast of the US state of California, and in the South Atlantic and Caribbean. In short, there’s a lot of overlooked diversity in the wood-borer family. 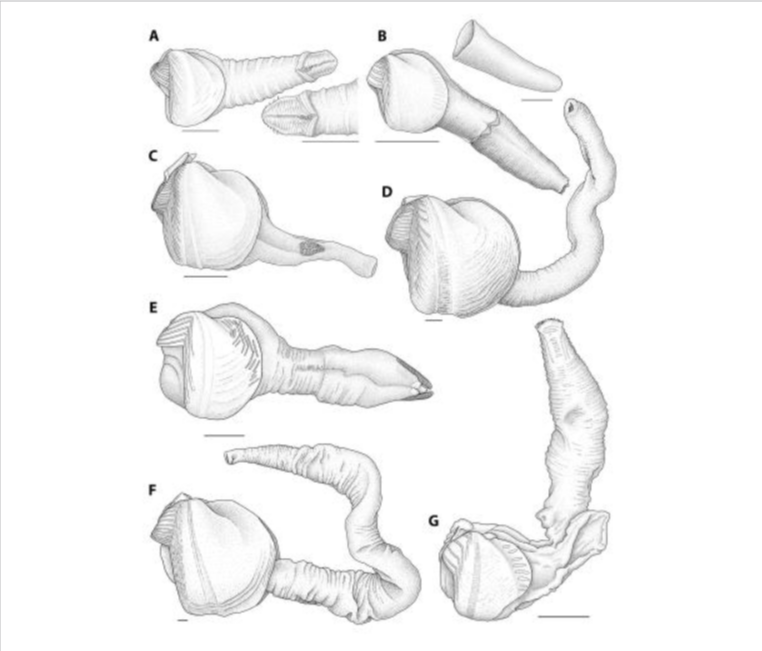 It’s a relatively thankless ecological career path, but diminutive wood-boring clams are likely exceptionally important to deep-sea ecosystems. With their super-specialised diet and near ubiquity on wood falls in the deep, the clams are the only big players in the early stages of undersea wood decay. By breaking the wood down, they make its carbon available to an entire community of crustaceans and marine worms.

Voight thinks the clam’s early bird colonisation-and-digestion scheme is crucial for the establishment of everything that comes after. She described an experimental wood fall that was recovered after 15 months in the deep, and hadn’t yet acquired any wood-boring clams—or anything else, for that matter.

“It had nothing on it,” she said. “So it kind of supports the idea that these [clams] are essential to the development of the whole community.”

With such a dependence on wood falls, any disruptions in the flow of trees into the deep sea has the potential to impact not only the clams, but everything else down there that needs them to make the wood palatable. 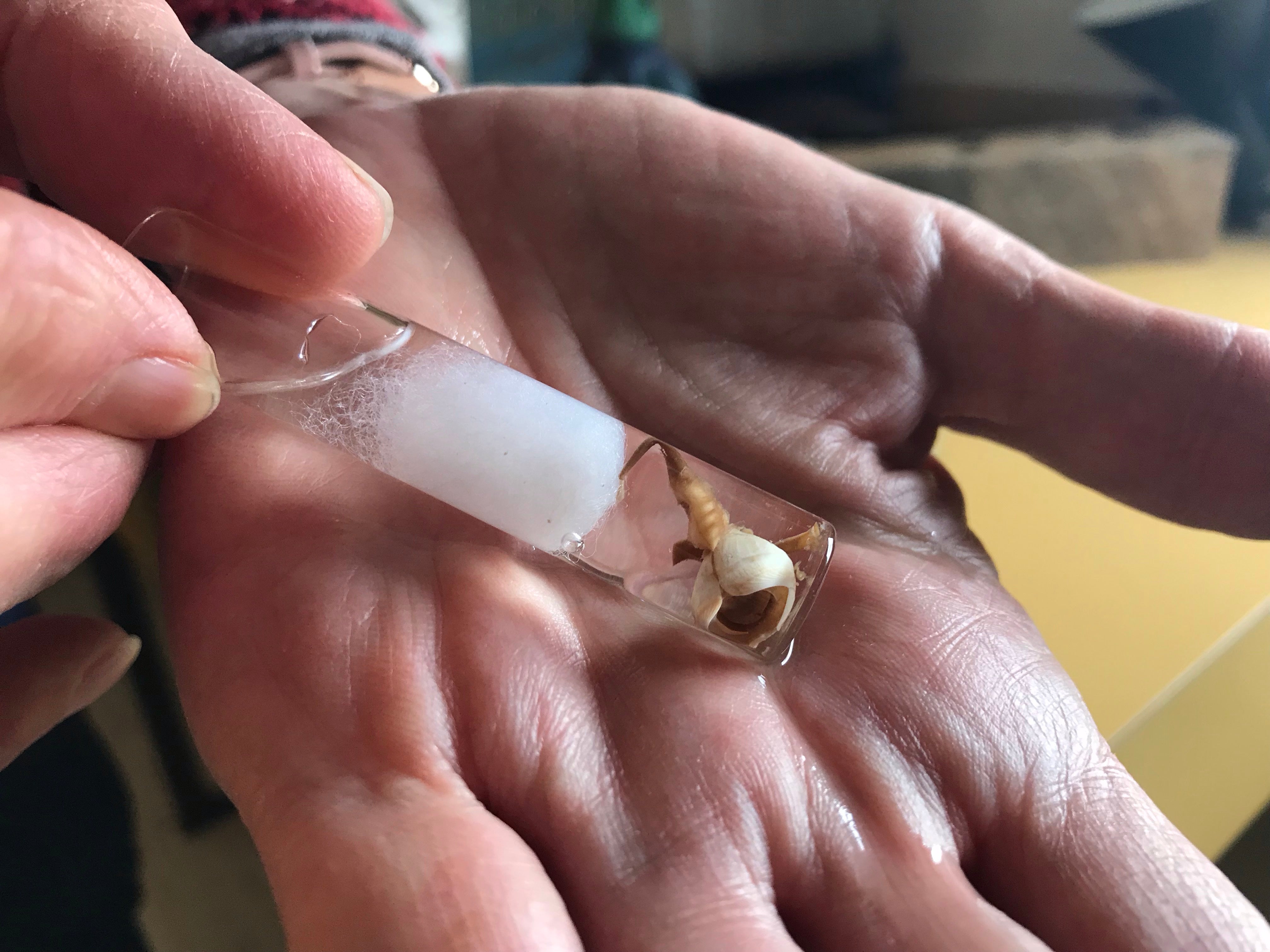 For now, the new study adds a critical piece of the puzzle in understanding these weird, dong-shaped diggers, and their place in an ecosystem hardly any of us ever see.

“We know so little about animals that live in the deep sea that having more information on anatomy, and on their history is vital for us to understand their evolution and how they live,” said Voight.