There’s a reason they call high blood pressure the silent killer. The British Heart Foundation says as many as 5 million adults in the UK have high blood pressure, which increases the chances of heart attack and stroke—and it's often undiagnosed, meaning you could have it and not even know it. Yeesh.

What is it?: A wrist-based blood pressure smartwatch
Price: $500 (£383) in the US; UK pricing TBA
Like: Accurate readings. Easier to use than cuff.
No Like: C-H-U-N-K-Y. Other smartwatch features limited.

But compared to heart rate, which can be measured through optical sensors, measuring blood pressure is trickier to get right for wearables makers. The medical community still primarily uses inflatable cuffs, but as anyone diagnosed with hypertension knows—as small as they’ve gotten in recent years, lugging a cuff around isn’t exactly convenient. It’s why Omron’s HeartGuide smartwatch is a technological feat. Not only can you take blood pressure readings right from your wrist, but it’s also capable of delivering push notifications and most impressively, has clearance from the US Food and Drug Administration (FDA).

The way the HeartGuide works is there’s a secondary, inflatable strap that works as a miniature cuff on your wrist. All you have to do is hold your arm at chest level and press the top button on the right side of the watch. Then presto bingo bango, a reading of your systolic and diastolic pressure appears on the screen. If you’re in a healthy range, you’ll see a green border. But if your blood pressure is high, it’ll be red. Readings can then be synced to Omron’s accompanying HeartAdvisor app.

Taking blood pressure readings is easy. It takes maybe a minute or two at most and is way more comfortable than a traditional cuff. You can definitely feel the strap inflate and resulting constriction, but it’s not quite so much like a boa constrictor wrapping itself around your arm. I tested the HeartGuide against a £40 blood pressure cuff and got very similar readings. The watch said my blood pressure was 110/62 with a pulse of 68 beats per minute. Meanwhile, the monitor gave me a reading of 113/70 with a pulse of 67 bpm. In either case, my blood pressure was within the same range on both devices within minutes of taking each reading. 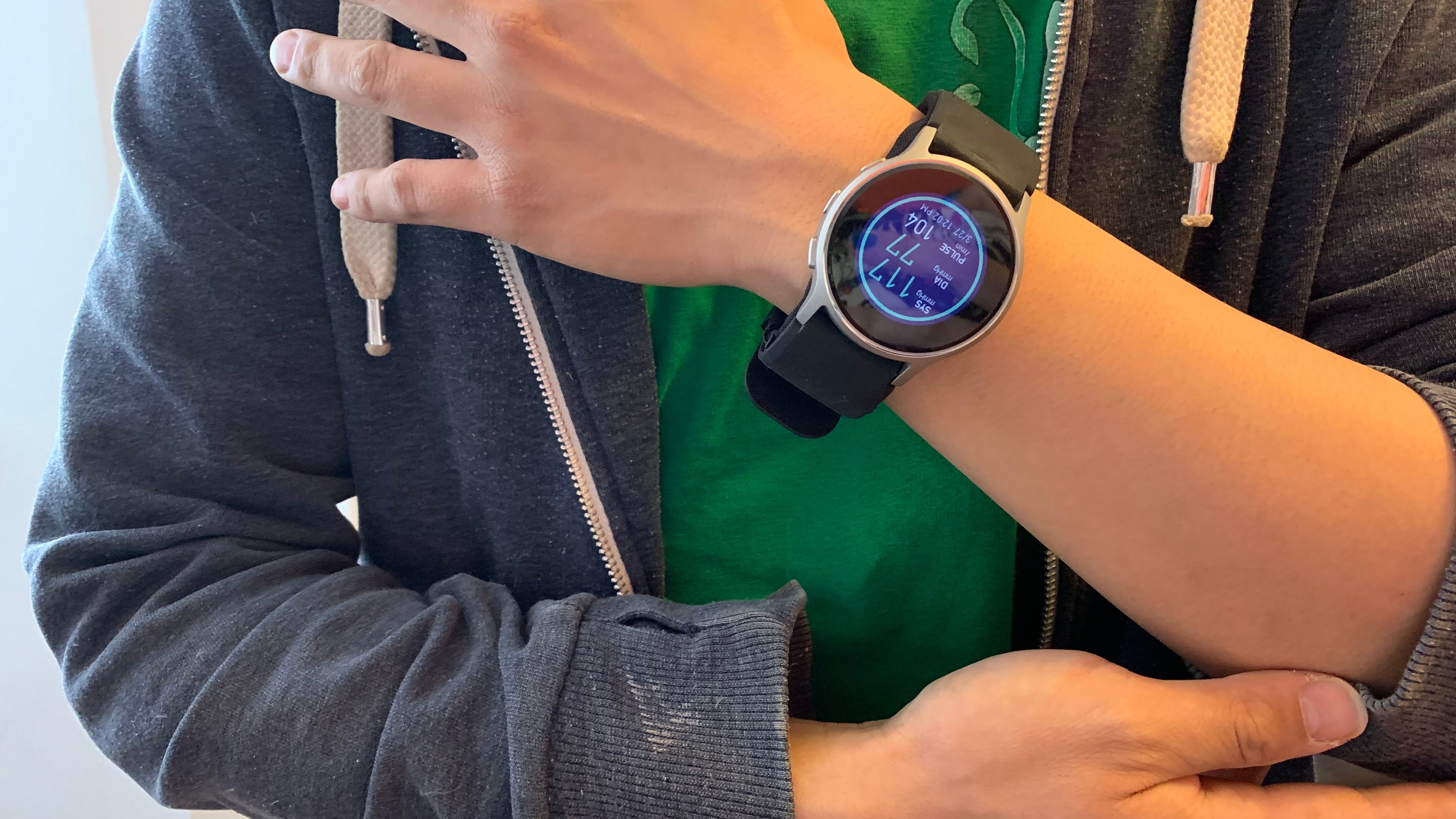 Given that the readings are easy, and the watch itself is quite portable, that does open up a lot of possibilities for blood pressure monitoring. Namely, it becomes much easier to measure the impact that say, running up a flight of stairs, might have on your blood pressure. Previously people were only capable of taking spot-checks in certain conditions (like the doctor’s office) that may not have told the whole story.

But how much of that is marketing speak, and how useful is it for people with hypertension to actually have a blood pressure monitor on your wrist?

As a 30-year-old with no family history of high blood pressure and a clean bill of cardiac health, I’m clearly not the demographic that would most benefit from this device. But my housemate does have hypertension, a family history of heart issues, and is notoriously bad at taking his blood pressure medication. (Sorry-not-sorry for the public shaming my dude. Though, to be fair, a study found that only 20 per cent of hypertensives take their meds as prescribed.) I gave him the HeartGuide for a week to see if it changed his awareness or habits. 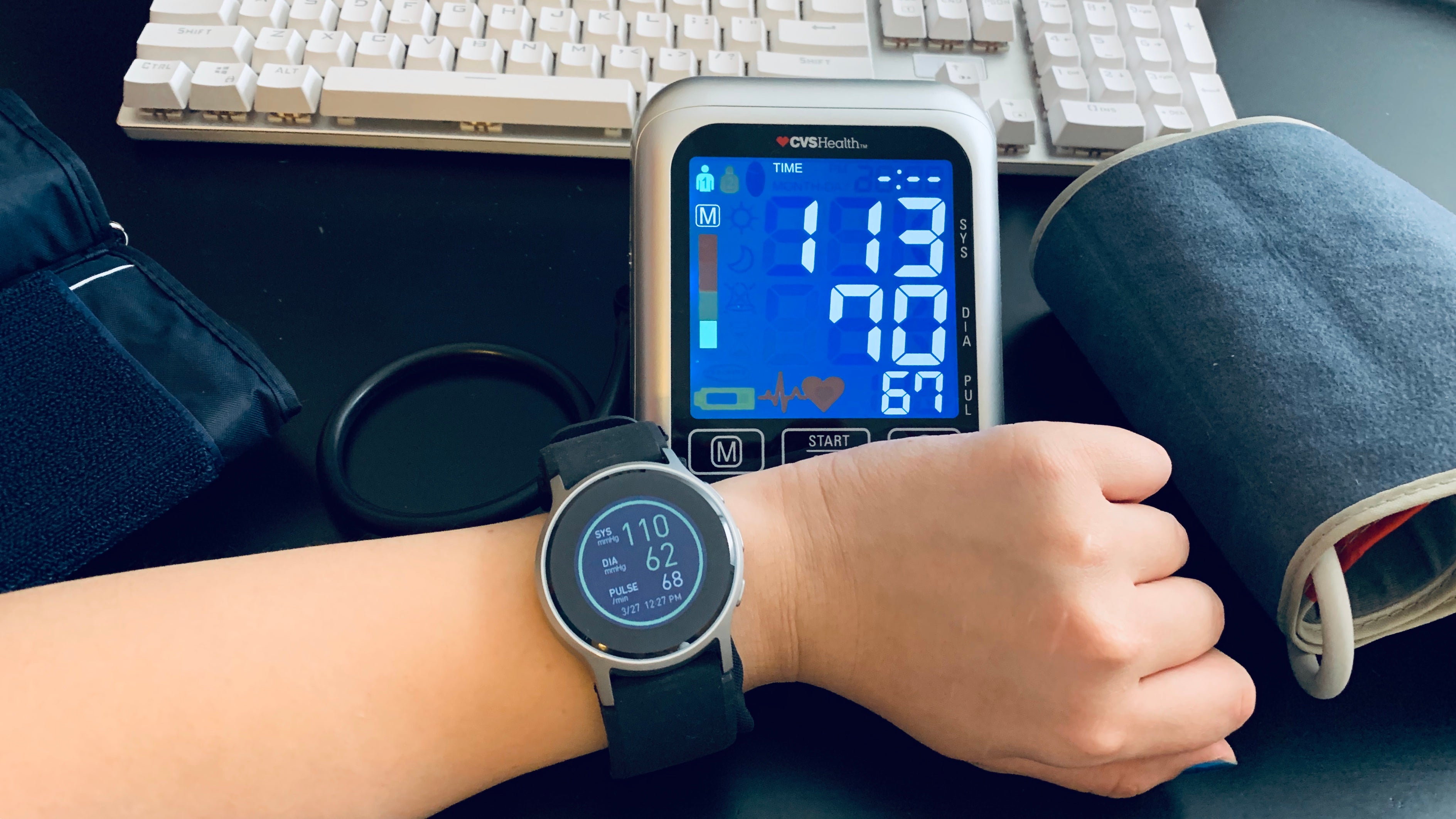 Readings were about as accurate as your regular inflatable cuff. (Photo: Victoria Song/Gizmodo)

After a week, he told me that yes—it was pretty helpful to be able to take readings straight from his wrist. Cuffs just aren’t that portable, and the HeartGuide let him check in while taking a break at work. He also said it reminded him to take his meds whenever he looked at his wrist, and that after a while, he noticed his resting pulse was higher when taking his meds regularly—a titbit he could ask his doctor about during his next checkup.

That’s pretty cool. But in our testing, we both noted one, not-so-tiny hitch. For all the impressive technology, and Omron’s patience in its two-year quest to obtain FDA clearance, this thing is incredibly uncomfortable to wear.

This chunky smartwatch has a case diameter of 48mm and a thickness of a little over half an inch. For comparison, the bigger Samsung Galaxy Watch is 46mm. The HeartGuide also weighs a hefty 4.1 ounces, which is far heavier than your average smartwatch—especially as newer iterations emphasise more lightweight materials. The review unit I tested was a medium, and it completely dwarfed my wrist. To get readings, I had to push it a bit further up my arms as it can’t actually enclose around my wrist. But for my housemate, the watch was actually a smidge too small. 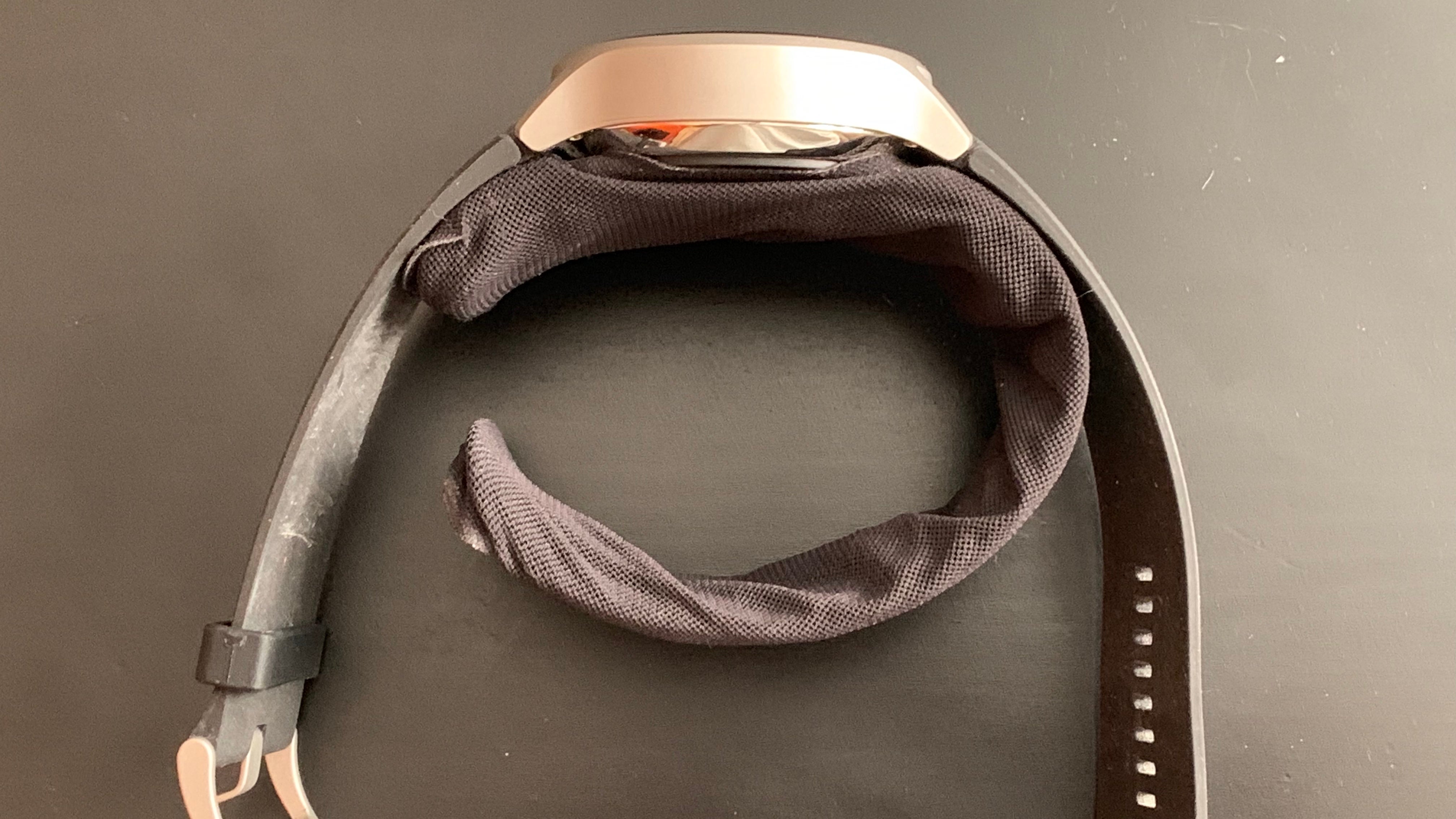 A closer look at the inflatable strap. (Photo: Victoria Song/Gizmodo)

It could be that we were both unlucky. Omron says the medium should fit about 70 per cent of wrists, and that the large and small versions of the watch should be available later this year. The main holdup is that each iteration of the watch needs to separately go through the FDA approval process, as the algorithms to calculate blood pressure differ slightly for each.

Even so, this clunker caught on jacket sleeves, made typing uncomfortable, and some nights, I would take the watch off in my sleep. To be honest...the HeartGuide is kind of ugly. It just screams Tech Dad Who Wears Cargo Shorts With Reeboks. 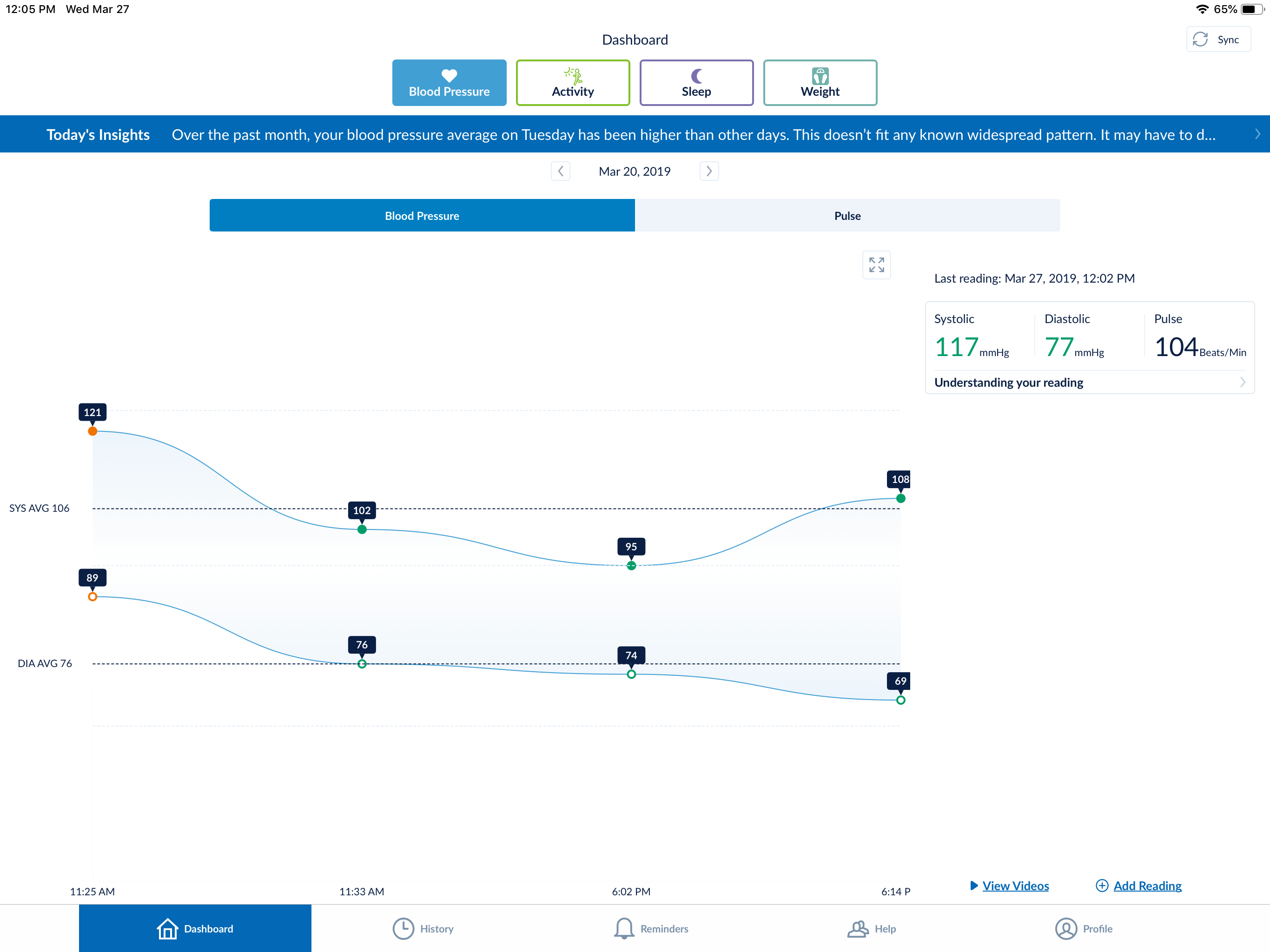 You can get an overall look at your blood pressure trends, as well as insights, in the HeartAdvisor app (Screenshot: Victoria Song/Gizmodo)

But to be fair, I’m pretty sure aesthetics wasn’t Omron’s main priority in creating this device. And, the age demographic that would most benefit from it—grandparents—also probably don’t give a flying toot if the HeartGuide delivers on what it promises.

But that’s where we get to value. At $500, the HeartGuide is pricey, and aside from blood pressure monitoring, its other features aren’t as fleshed out as other smartwatches. As far as health goes, you can track steps, distance travelled, calories burned, and sleep patterns. You also get call, text, and email notifications—but that’s about it. There’s no fancy third-party app ecosystem and the only app you’ll really be using with this thing is the Omron HeartAdvisor, which lets you track your blood pressure trends over time and gives insights into how your behaviours might impact your health.

The battery is solid, however. Omron says the typical user can expect to charge about 2-3 times per week, depending on how often they take their blood pressure. In real life testing, taking measurements about twice a day, it lasted about three days before needing a charge. 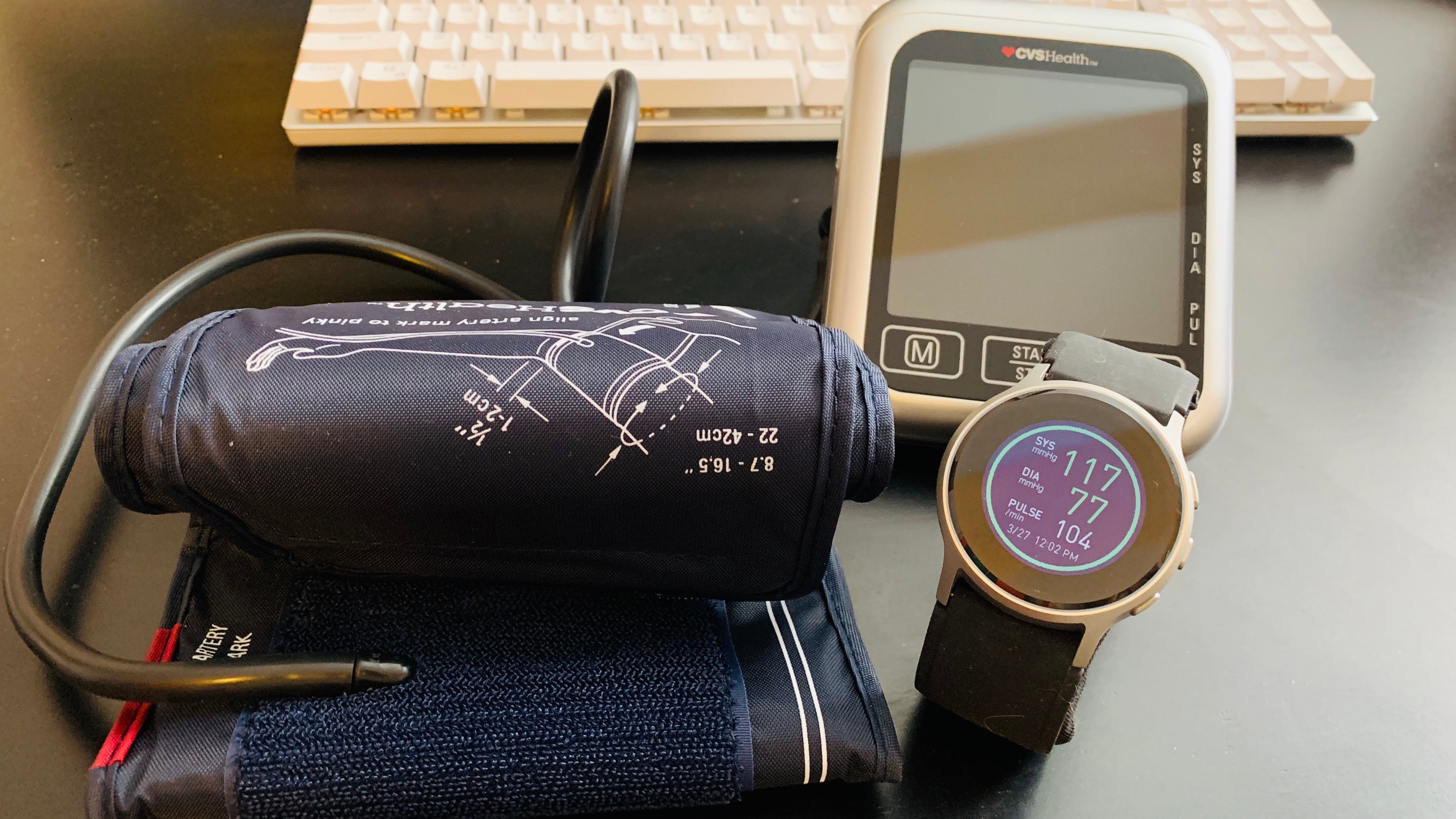 What we have here is a smartwatch that’s the first of its kind—and while it’s good at taking your blood pressure, it’s so-so at everything else. That’s not to shit on Omron’s technological achievement. It’s just acknowledging that this is a Version 1 product, and if Omron gets to refining for a Version 2, I could see it being a lot better with the help of some feedback. Maybe the components get smaller. Maybe the design gets tweaked so it’s less bulky. Maybe the app gets more updates, and notification capabilities are expanded.

But right now, this is definitely your grandparents’ smartwatch. The only people with a good reason to buy it fit a limited profile: Hypertensives, probably aged 60+ (though there may be exceptions like my roommate), who are looking for a more convenient way to monitor their blood pressure. And for them, the HeartGuide is probably their best option aside from a regular ol’ pharmacy cuff. Actually, it’s their only wearable option really. While the Samsung Galaxy Active does technically have a blood pressure monitoring feature, it’s very much a beta program that only estimates your blood pressure based off a sensor and initial cuff reading. It’s in no way FDA approved—and Samsung does not intend to have the device go through that process. 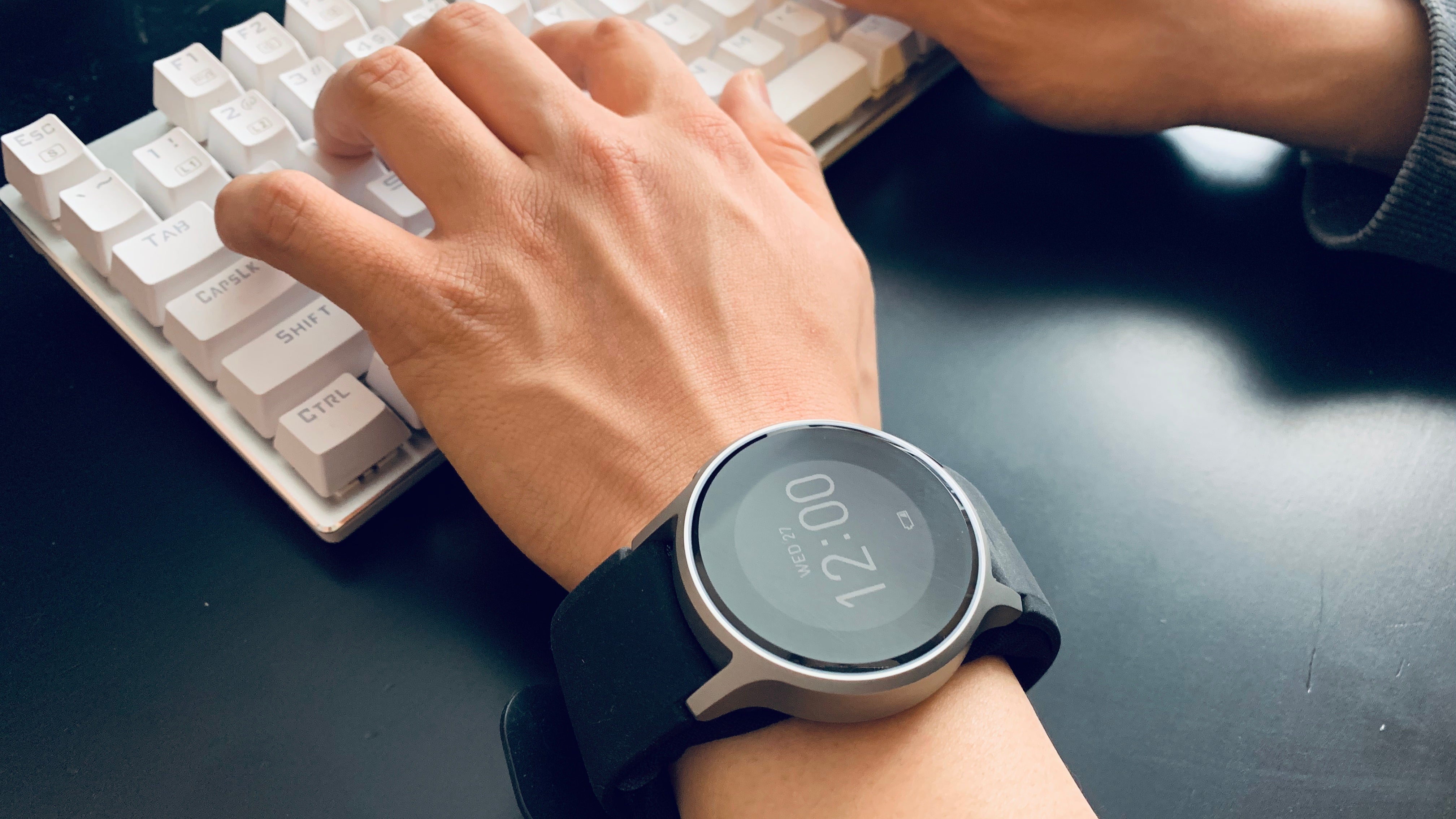 In terms of design, this watch is bulky and can make typing and other tasks uncomfortable. (Photo: Victoria Song/Gizmodo)

So if you’re concerned about mum because your family has a history of strokes, or you know granddad is awful at taking his blood pressure medication regularly, the Omron HeartGuide is a good gift to consider having everyone pitch in on. That said, an inflatable cuff is considerably cheaper and nagging is always free.