In the early days of radio broadcasting, there was no easy way to tell how many people were listening to the soap operas and prestige crime dramas, and, subsequently, how many were actually hearing the radio ads for tooth powder and name brand coal for your furnace—information that advertisers desperately wanted.

It wasn’t like counting the number of newspapers sold to get an idea of how many people at least had the opportunity to see a given advertiser’s message. Radio had nothing analogous.

And so media researchers in America took to using crude tools to figure out what people wanted to hear over the radio waves.

“Before the rating services started, a lot of it was fan mail,” Karen Buzzard, Professor of Media and Communication at Fairleigh Dickinson University, told Gizmodo. She explained that the amount of fan mail served as a crude metric to gauge how many people were listening to a particular programme and what they thought about it.

Whereas my own “fan mail” these days consists of strangers calling me a “libtard,” or worse, direct feedback through the US Postal Service was actually a fairly useful way to tell what audiences and consumers liked and didn’t like back in the early 20th century.

But before long, researchers were calling people up on the phone and asking them what they had listened to the day before, or what they were currently listening to. Phone interviews were the standard if laborious and intrusive audience measurement tools for radio by the 1930s. That is, until the Audimeter was invented in 1936. 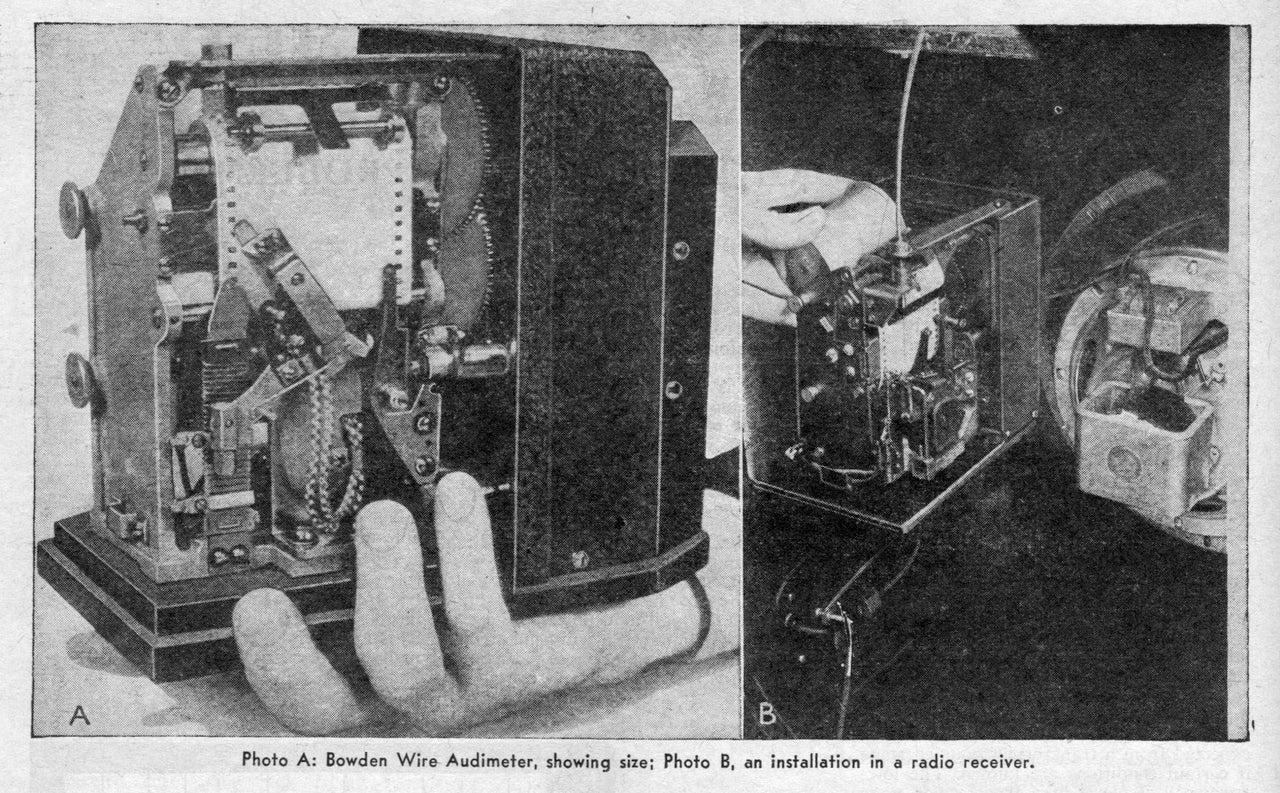 Photo showing off the inside of an Audimeter, a device for measuring what people were listening to on radio (Photo: February 1945 issue of Radio-Craft)

The February 1945 issue of Radio-Craft magazine included an article titled “Radio Audience Meter” which looked at the machine that was revolutionising audience measurement. First installed in homes on a trial basis in 1939, the Audimeter was placed next to a family’s existing radio.

The article included photo cutaways that showed how the Audimeter worked. Back in those days, radios had dials. Fitted with a series of gears, the Audimeter was a standalone device connected to a radio. It had an arm that moved whenever the radio dial was turned. So whenever the radio station was changed, the Audimeter’s arm would swivel along a long tape that was slowly rolling inside this gadget. The tape inside was about 100 feet long and three inches wide and reportedly lasted for about a month of recording.

The market researchers would collect the tapes by visiting each house monthly and shipping the tapes to a plant in Chicago. Once there, the tapes were processed by dozens of labourers feeding the tapes into tabulation machines.

“The Audimeter made it more scientific,” Buzzard noted about the measuring device. “They got automatic readings.”

And words like “scientific” and “automatic” were all the rage for gadgets of the 1940s, even if by today’s standards there was quite a bit of legwork involved. 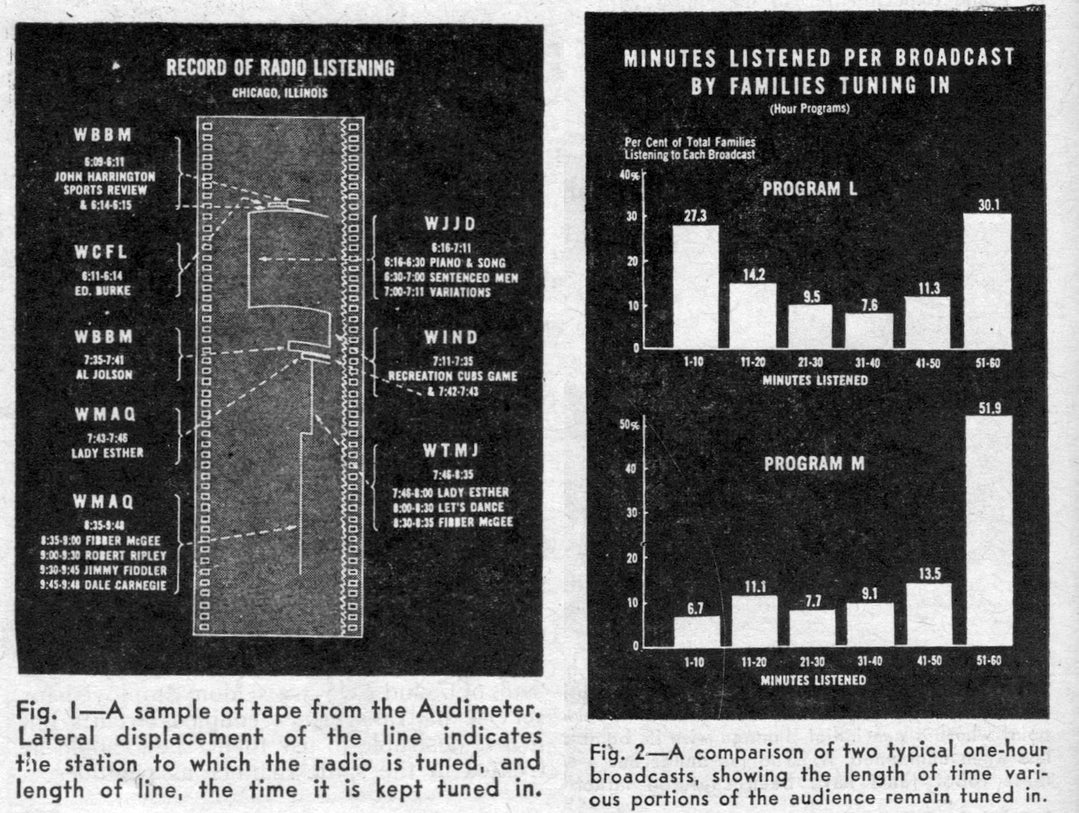 Illustrations showing how the Audimeter worked and how that data was turned into graphs (Image: February 1945 issue of Radio-Craft)

Arthur C. Nielsen wrote an article for The Journal of Marketing in 1942 that presented a vision for the future of radio advertising. Nielsen (yes, that Nielsen) explained that while they still do plenty of in-person interviews and phone polls to find out what people are watching, his company had started to use the Audimeter, originally built by two professors at MIT named Robert F. Elder and L.F. Woodruff.

Nielsen explained that their Audimeter was in about 200 Midwest homes representing a certain cross section of America and promised that there would soon be about 1,000 across the country.

“At first glance a sample of 200 Audimeters may seem rather small, but it must be kept in mind that each of these remarkable instruments produces, in the course of a year, an amount of information approximately equal to that which could be obtained from about 500,000 coincidental telephone calls!” Nielsen wrote.

“In other words,” he continued, “these 200 Audimeters have produced, to date, a volume of information approximately equal to what could have been secured only by the use of about 300,000,000 coincidental telephone calls!” And while the maths don't quite add up, you get the picture. It’s a lot of information.

“Furthermore,” he added, “the Audimeter produces a great deal of information which cannot be secured by any other method.”

What kind of information? Not only could market researchers decipher what programmes people listened to, the Audimeter tape could also tell them how long they listened. And because researchers knew about the families whose homes they equipped with Audimeters, they knew information like income level, number of kids, and really anything else that advertisers might find useful. If, for example, a maker of toothpaste wanted to reach more upper middle class women in the Midwestern US with three kids, they knew precisely what programmes those women were most likely listening to. 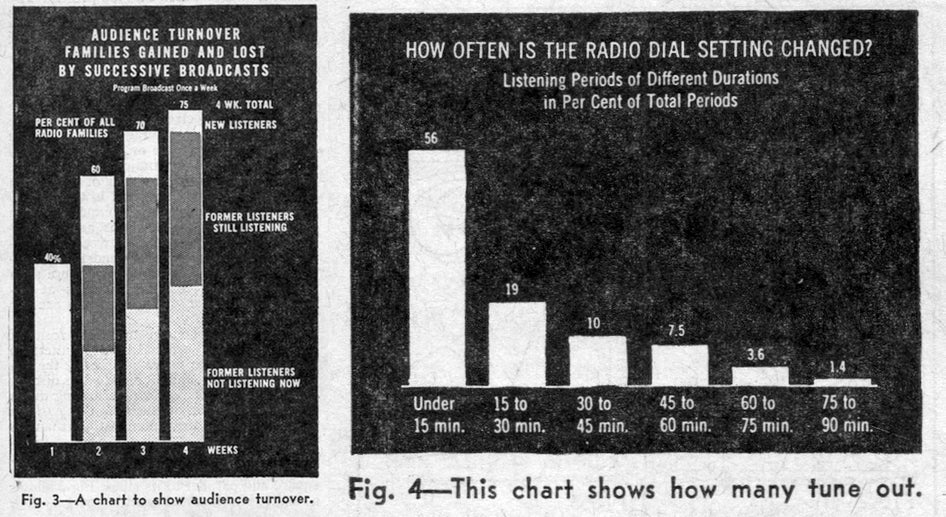 And if it was inconvenient to install the Audimeter directly on the radio set, it could be hidden away in a closet and it would communicate with the radio remotely. The top image on this post shows just such a “Hunter Audimeter,” but below we see what it looks like from the back. 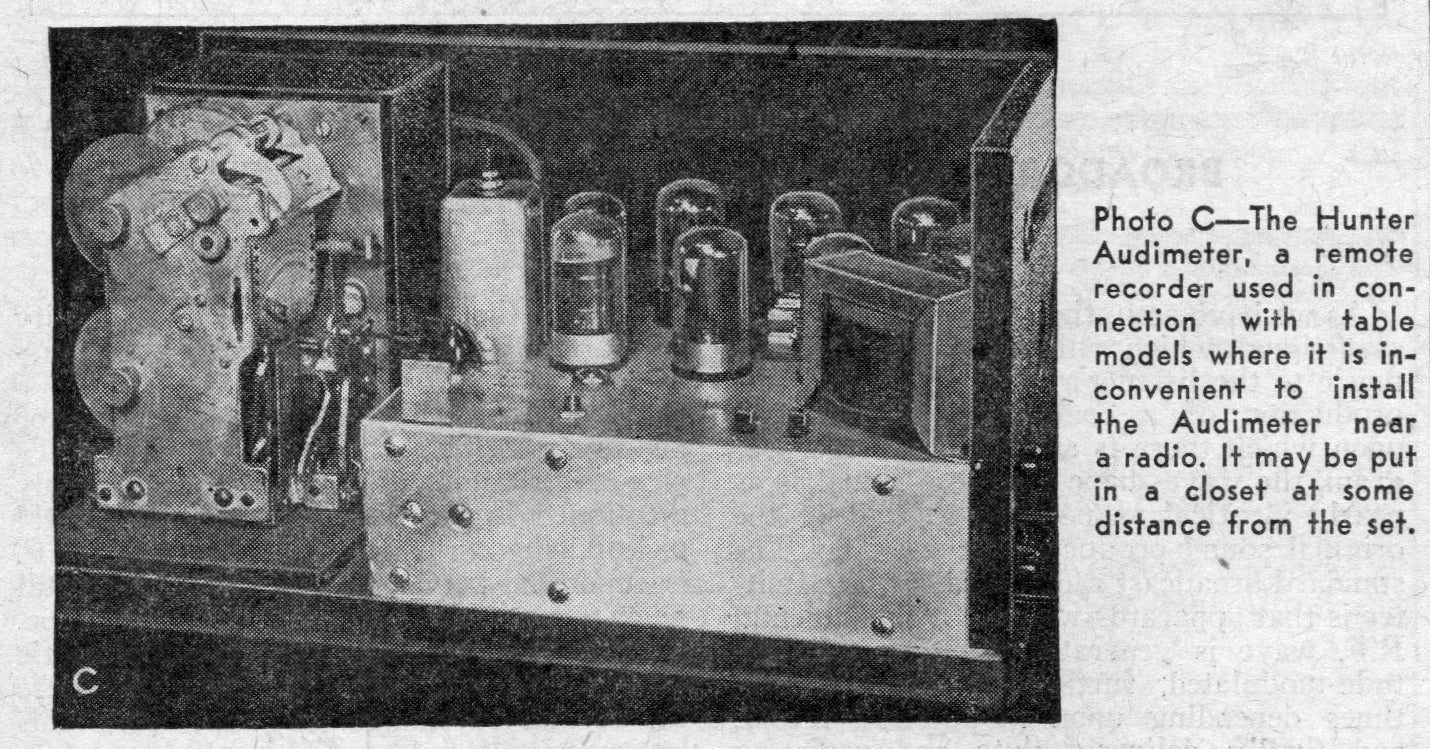 The Hunter model Audimeter, which could be put in a closet and communicated with a family’s radio nearby (Image: February 1945 issue of Radio-Craft)

Now you might be thinking, it’s all well and good that you can measure precisely what radio program,es are the most popular, but how do you as an advertiser know that people will actually buy your product if you advertise on a given programme? In a follow-up article for The Journal of Marketing in January of 1945, Nielsen addressed that question. Well, not so much addressed, as promised that they were working on it and you should trust them:

For the past five years [National Radio Index] service has been exploring the job of measuring the sales effectiveness of radio advertising. Initial reports of the results were made to clients beginning a few months ago. But let no unwary soul conclude that this job is as simple as the production of program rating! The research work already devoted to this single phase of NRI service has now mounted to more than ten times the effort which Madame Curie and her husband expended in their famous research program to isolate radium. It is not in order here to attempt a detailed report on the findings in the measurement of sales effectiveness, but it can be reported that excellent progress has been made in this comprehensive undertaking, and that NRI clients are now receiving figures which reveal, for each of many important programs, the sales produced per radio dollar expended.

That’s right, they’re working harder than Marie Curie on the question of whether people want to buy your corn flakes after they hear an ad on the radio. Curie famously died of radiation poisoning from her experiments, but I guess that’s neither here nor there.

By 1945, after the end of World War II, the production of Nielsen’s Audimeter went into overdrive and the research company was able to extend its reach considerably. There was even an Audimeter for TV that was developed when that became a hit in the United States.

Today, audience research has changed dramatically and completely overhauled the way that ads are sold. We went from families volunteering to host a little gadget full of tape in their homes, to something called “smart TVs” that are straight up spying on you and worse.

What does the future hold for advertisers and market researchers? In the United States, the sky’s the limit. European countries have passed strict data protection laws like the GDPR that are theoretically going to make it harder for companies to track consumers. But the US is still the Wild West when it comes to consumer research. And everyone and everything seems to be trying to extract as much information about you as possible. Featured image: Nielsen