These 'Astroecologists' Are Using Star-Spotting Tech to Count Endangered Animals

Astrophysicists sometimes turn to thermal infrared technology to help them find and study stars. The technology’s been around for decades, and it’s constantly evolving to reveal more about the cosmos. Now, some of these scientists are bringing their expertise to the world of conservation. If thermal cameras are capable of spotting distant stars, well, they must be capable of finding animals here on Earth, right?

In what the researchers are calling the first official collaboration between astrophysicists and ecologists, a team from Liverpool John Moores University went in search of Bornean orangutans, a critically endangered species that hides in the forests of Borneo, a southeast Asian island. A presentation Tuesday at the Unifying Tropical Ecology Conference in Edinburgh highlighted the way drones equipped with the astrophysicists’ infrared imaging technology can more quickly and effectively count the number of individual orangutans in the forest canopy than people can. This experiment’s success has opened the door for experts to use this star-gazing technology to examine other rare and endangered species. 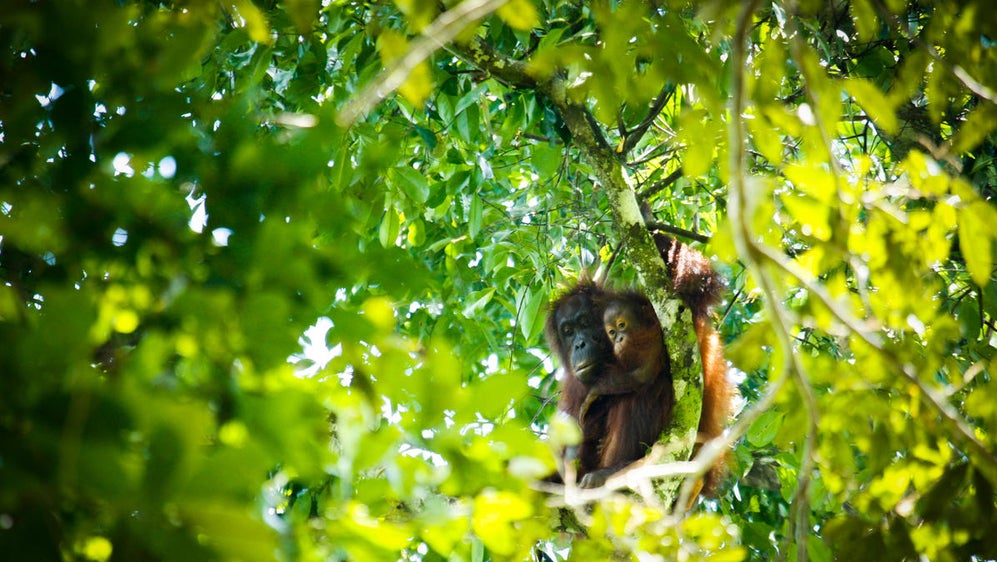 The study, which has been accepted for publication in the journal Unmanned Vehicle Systems, involved a drone pimped out with a regular camera and a thermal camera and a group of field ecologists. As soon as they arrived in the field, the battle was on: Who could spot the most orangutans? The drone took 28 flights from 10-15 May 2018, at the Sepilok Orangutan Rehabilitation Centre and the Kinabatangan Orangutan Conservation Project. Each flight lasted only 10 minutes because of the drone’s battery life.

However, in that short time, the drone was able cover nearly a half square mile, spotting every orangutan humans on the ground saw—and then some. In total, the drone found 41 orangutans whereas the field team could find only 28. The drone also captured images of pygmy elephants and proboscis monkeys.

Of course, this tech isn’t without its limitations. It can miss any animal hiding beneath a branch, and it can be hard to figure out if you’ve double counted an individual. Plus, this star-inspired tech works only before 9 am or after 7 pm in these particular rainforests. Any other time, the environment is way too hot to properly locate the heat signatures of the animals.

“We’re hoping to apply this to all sorts of animals. Rhinos, elephants—you name it, we want to do it.”

“We know that there are some ecologists who thought that this kind of environment would just be impossible to see any animals because it’s so warm and humid in the tropical rainforest,” said Claire Burke, an astrophysicist at Liverpool John Moore University and co-author on the research.

That’s been a big issue in the past when researchers have attempted to use thermal infrared technology to find wildlife; it often reads the warmth from the background and causes confusion for the experts trying to discern distinct animals. Previous attempts to use thermal cameras for this purpose have also run into resolution issues, according to Burke.

The astrophysicists’ souped-up thermal cameras can hopefully help save researchers’ hours spent searching for orangutan nests from the ground to keep track of their populations. This traditional method takes a lot of money—and time. While the exact number of Bornean orangutans left isn’t certain, conservationists believe a little over 100,000 remain in the wild.

The researchers have coined a new name for their field that brings together ecologists and astronomers: astroecology. They’ve developed a four-person astroecology group that’s been around three years now. Their goal? “By applying methods and technology from astrophysics, engineering, and computer science, we aim to help solve major global challenges such as mass extinction, environmental pollution, climate change, and disaster response (search and rescue),” according to the website. 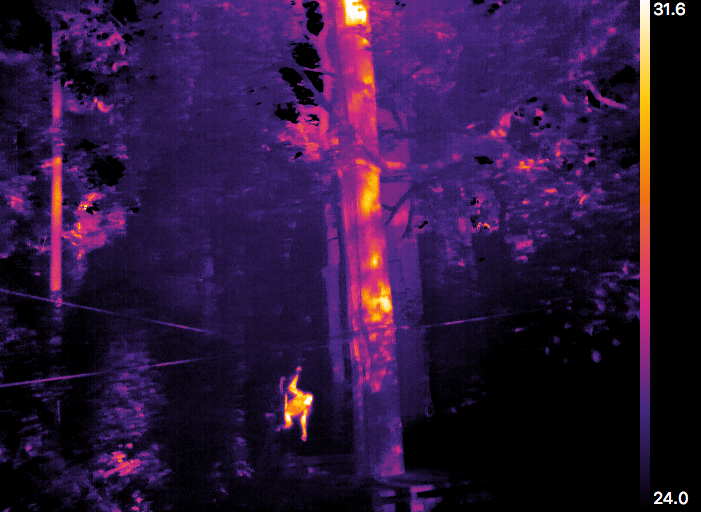 Orangutans are the first species this team has shown it can track using tools from astrophysics. The scientists are currently finishing up another paper using the same star-spotting tech to look at spider monkeys, said Burke. Her team’s next trip will be to Madagascar to study Lac Alaotra bamboo lemurs.

Each animal has its own thermal fingerprint of sorts, so the scientists are developing an algorithm to help drones identify different animals. The goal is to build an autonomous drone—that can fly for longer than 10 minutes—to count these species and help protect them.

“We’re hoping to apply this to all sorts of animals,” Burke said. “Rhinos, elephants—you name it, we want to do it.”

Once these algorithms can distinguish the thermal fingerprint of humans, the drones should also be able to alert park rangers when humans are in protected areas where they shouldn’t be. The idea is to eventually catch poachers this way.

“If it sees a human somewhere they shouldn’t be, then [the authorities] can go catch them before they do any harm,” Burke said.

This technology is only beginning to find its footing in the conservation space, but it’s off to an exciting start.