It’s an unsettling glimpse into the inevitable future of warfare where battles are indistinguishable from video games, but watching a pair of robots duke it out is always entertaining. If your aspirations of one day rolling your competitor into the Robot Wars arena have been thwarted by a complete lack of engineering skills, GJS’ Geio is an easy shortcut to some genuinely fun robo-combat; if you’re willing to splurge on a pair of them.

What is it?: An app-controlled fighting robot toy.
Price: About £170, each.
Like: Incredibly fast and agile, battles can be a lot of fun if you have the space.
Dislike: Controlling the robots with touchscreen controls is a pain.

Outside of factories, the military, and cleaning floors, robot makers have had a hard time convincing consumers why they need a bot at home. As companions, security guards, smart assistants, or substitute pets; robots have so far failed to justify their existence. But GJS’ Geio doesn’t pretend to be anything other than a robot designed for make-believe combat. It’s a real-life equivalent of a video game mech, and while the weapons, sounds, and effects are all simulated during a battle in your living room, the overall experience ends up being more entertaining than just staring at a TV screen with a controller in hand.

Originally brought to market through a Kickstarter crowdfunding campaign, the foot-tall Geio robot looks and feels like a product from a large company that’s been making toys for decades. You’d swear you’ve seen its detailed, anime-inspired designed in a cartoon before, and it’s satisfyingly heavy thanks to a metal frame that provides rigidity and sturdiness as you’re driving it around and inevitably crashing into furniture.

There are currently two versions of the Geio robot, distinguished by a red or blue colour scheme. (Image: Andrew Liszewski/Gizmodo)

A light-up, spinning cannon adds some realism to battles, while a 3-megapixel camera streams a first-person view to your smartphone or tablet. (Image: Andrew Liszewski/Gizmodo)

Sensors on each leg detect when the robot’s been hit, but internal motion sensors can also register physical collisions. (Image: Andrew Liszewski/Gizmodo)

A hefty 2,000 mAh battery gives the robot a startling amount of speed. At times it can move almost too quickly. (Image: Andrew Liszewski/Gizmodo)

The easily removable battery can be charged using a standard microUSB cable, and it can be charged on or off the robot. Other toymakers, please take note: this is the correct way to do rechargeable batteries. (Image: Andrew Liszewski/Gizmodo)

It could almost pass as a painstakingly assembled model you’d leave untouched on a shelf when finished, but a power button brings the whole robot to life with flashing LEDs and a moving turret—complete with a spinning cannon—that quickly scans the room. Your smartphone or tablet running a free app serves as a wireless controller, scorekeeper, and a virtual lobby where you choose one of several game modes. The robots connect to your device using their own private wifi networks, but given there are just two models to choose from, I wish the default network names weren’t so cryptic. If you have one of each, you’ll probably want to immediately rename “Geio_7CDF60” and “Geio_7149A4” to “Geio_Blue” and “Geio_Red” so you can easily figure out which bot you need to connect to.

Even at “Normal” speed, the Geio robot can be hard to control if you don’t have enough open floor space. (GIF: Andrew Liszewski/Gizmodo)

Omnidirectional wheels allow the robot to move in any direction like a video game character, but they do get dirty quickly. They really only work on hard surfaces, and carpeting slows the bot down dramatically. (Image: Andrew Liszewski/Gizmodo)

You can adjust the speed of the robot during battle, but the “Fast” option is simply too fast for touchscreen controls. (Image: Andrew Liszewski/Gizmodo)

The Geio robot is surprisingly fast and agile—to the point of actually being too fast to control sometimes. It uses a set of four omnidirectional wheels that allow the robot to change directions quickly without having to make any steering adjustments. Driving one feels like controlling a character in a video game, with the ability to strafe side-to-side, and manoeuvre left, right, forward, and back without taking your crosshairs off your opponent. During a battle or race, you can pop into the settings at any time to adjust your robot’s overall speed, but the fastest option is only suitable for a large gymnasium or a very open space. In a small room, your robot will wildly careen around while you struggle to control it.

Geio’s touchscreen controls can be a challenge, but the first-person view lets you pilot the robot without taking your eyes off the screen and controls. (GIF: Andrew Liszewski/Gizmodo)

The Geio robot’s speed and agility wouldn’t be quite so intimidating if the toy included a physical controller. Touchscreen controls remain a challenging way to remotely steer and control a toy like this, even with a live-streaming first-person view—courtesy of a three-megapixel camera—of what the robot sees in your hands. Having to look away from the action to frequently re-position your hands on a virtual joystick is annoying, and even with motion-controlled steering turned on, piloting this robot without physical buttons is a challenge. I understand app controls are a cheaper solution for an already pricey toy, but an add-on physical controller would be a welcome option.

The Augmented Reality mode is the latest addition to the app for players who don’t have a second robot to battle. (Image: Andrew Liszewski/Gizmodo)

The AR Mode places the physical robot into a virtual battle that plays out on your phone, using a mat you place on the floor for tracking reference. (Image: Andrew Liszewski/Gizmodo)

For the AR Mode to work, you also need to cover your robot in tracking marker stickers, which don’t always stick that well. (Image: Andrew Liszewski/Gizmodo)

Occasionally in the heat of battle, the Geio robot would end up on the microfiber tracking mat, and get the fabric caught up and trapped in its wheels. (Image: Andrew Liszewski/Gizmodo)

The Geio robot does manage to rise above its controller challenges by being genuinely fun to play with, but it’s one of those toys where having a friend, and a second robot, greatly increases its replay value. A single-player AR mode was recently introduced that incorporates the physical robot into a virtual battle that plays out on your phone or tablet. It uses a play mat, and tracking stickers stuck all over the bot so the app and your device’s camera can track the movements of the Geio in real-time. It’s well executed, but it still feels more like an afterthought for those who’ve only bought a single Geio robot. It left me wondering why I wouldn’t just play a dedicated robo-combat game while plopped in a comfy chair, instead of struggling to hold my phone out so the AR features could track the toy’s movements. 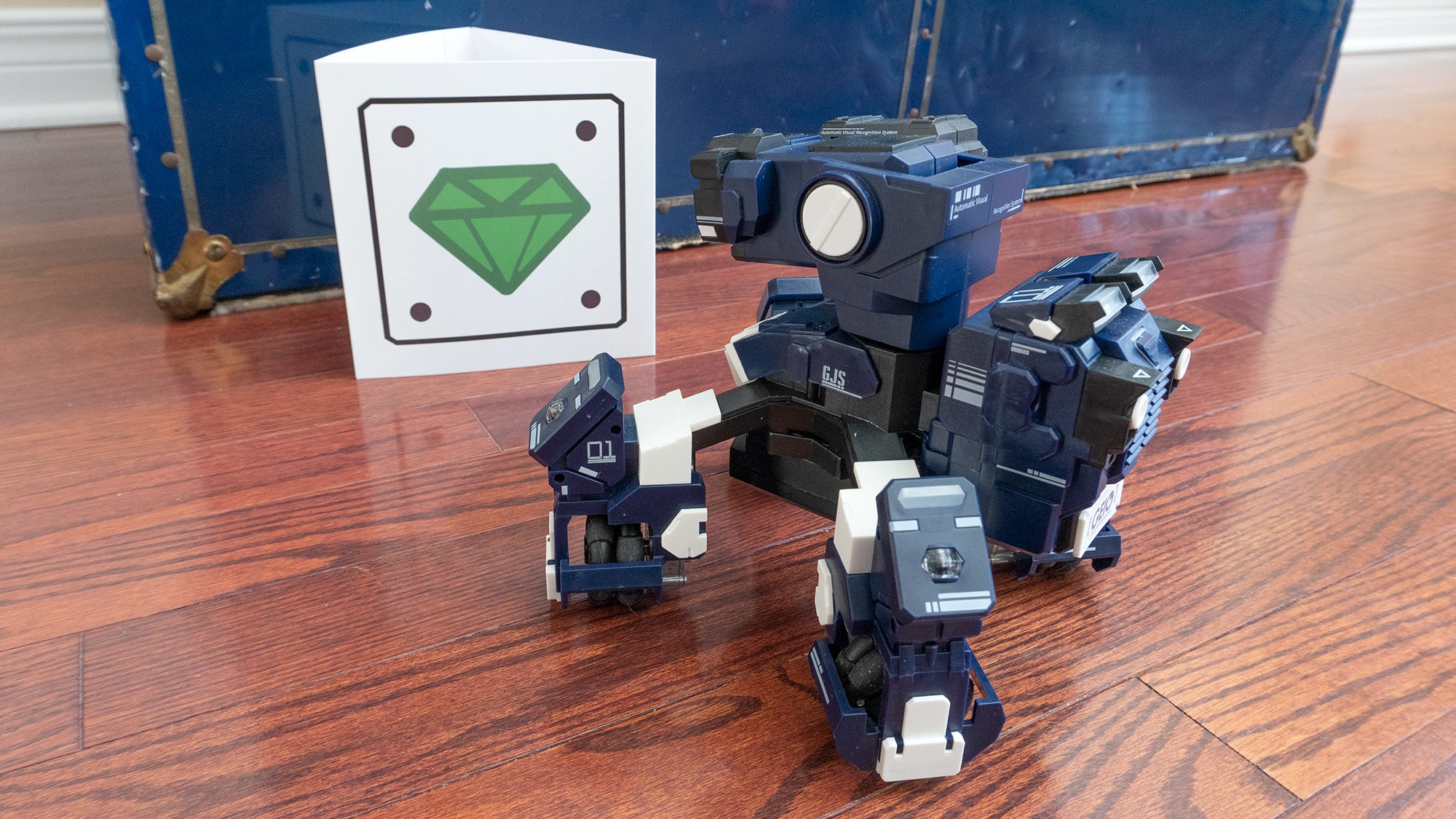 The Geio robots pack enough to AI to visually recognise a series of tokens you can place around a battlefield or race track for power-ups. (Image: Andrew Liszewski/Gizmodo)

Driving the robot around on its own is entertaining for a while, as is pretending to shoot anything in its virtual cross-hairs, but as with most things in life, two is better than one. Battles are more enjoyable against another human-piloted Geio opponent, as are other game modes like racing or treasure-hunting that involves auto-detected tokens and power-ups you can place around your floors for an added challenge. When fighting another robot, the app tracks how much damage you’ve each taken, while vibrations and on-screen graphics let you know when you’re hit. It all very much feels like a video game, but there’s something slightly more satisfying about backing your actual robot behind a couch for protection or just ramming your opponent to score a hit. 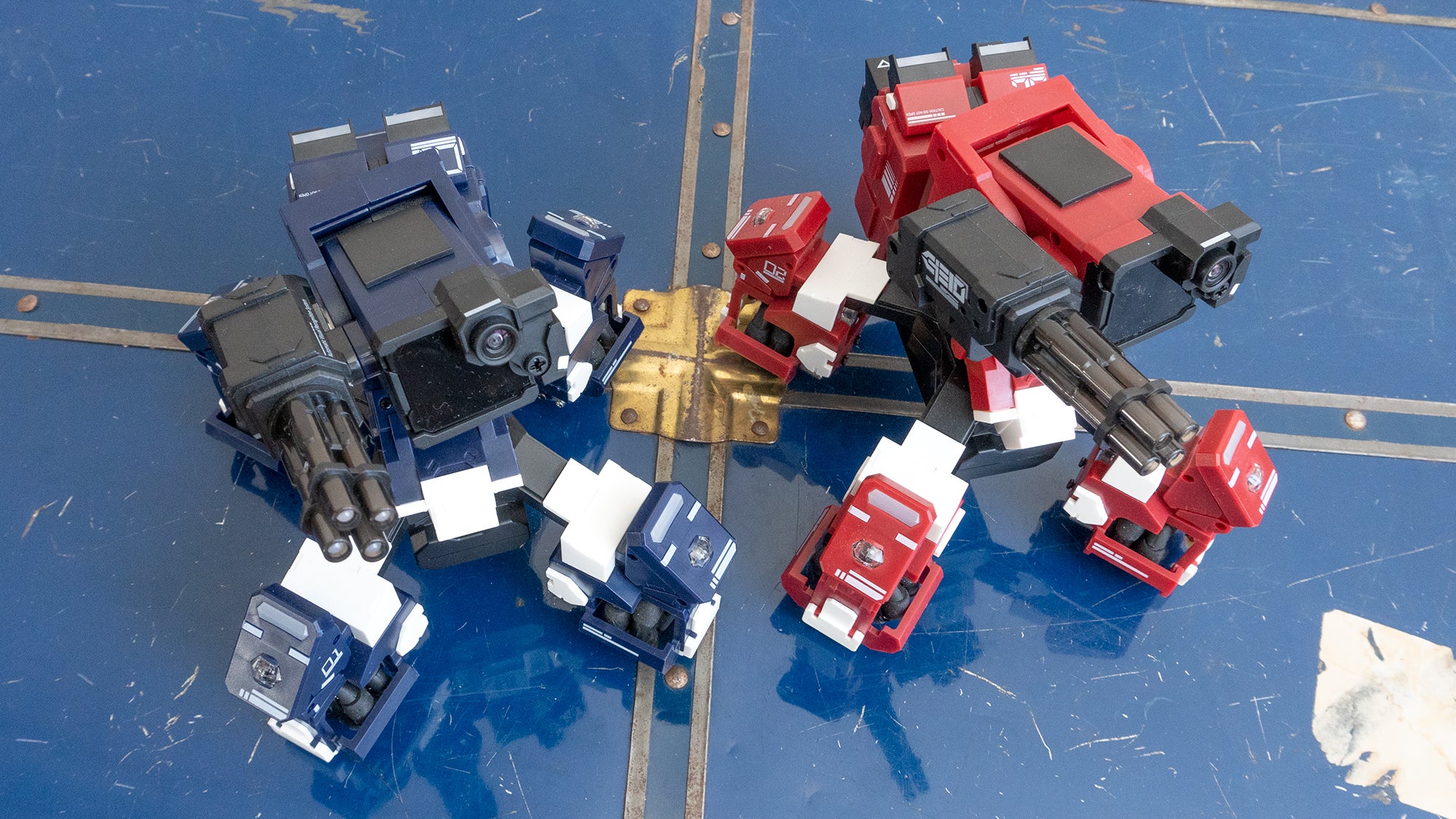 Given it was a product born of a crowdfunding campaign, I’m impressed with what the Geio robot can do. Its unique omnidirectional wheels, which you commonly only see in industrial applications, work so well that I’m surprised more remote control toys haven’t adopted them. Unfortunately, touchscreen controls remain a disappointment, especially for a toy that’s as fast and agile as this one. But the bigger problem is that you’ll need to cough up £340 for a pair of Geio robots to get the maximum enjoyment out of them.