Archaeologists in the Bolivian Andes have discovered a 1,000-year-old ritual bundle—basically a stash of drug paraphernalia—containing traces five different psychoactive substances, including cocaine and the active ingredients found in ayahuasca.

New research published this week in Proceedings of the National Academy of Sciences describes a rare ritual bundle found buried at the Cueva del Chileno archaeological site, a cave in southwestern Bolivia. The ancient stash—found at an altitude of 13,000 feet—likely belonged to a shaman who had access to a remarkable assortment of plant-based psychotropic drugs, according to a University of California-Berkeley team led by archaeological Melanie Miller.

Ayahuasca—a trip-inducing, plant-based mixture comprised primarily of dimethyltryptamine (DMT) and harmine—is typically associated with modern (or post-Hispanic) indigenous peoples living in the Amazon basin. Archaeologists have previously found evidence of psychedelic drug use in pre-Columbian societies, such as coca (used for cocaine) and vilca (of which bufotenin is the active ingredient), but the researchers say these substances have never been found together in a single collection—until now. 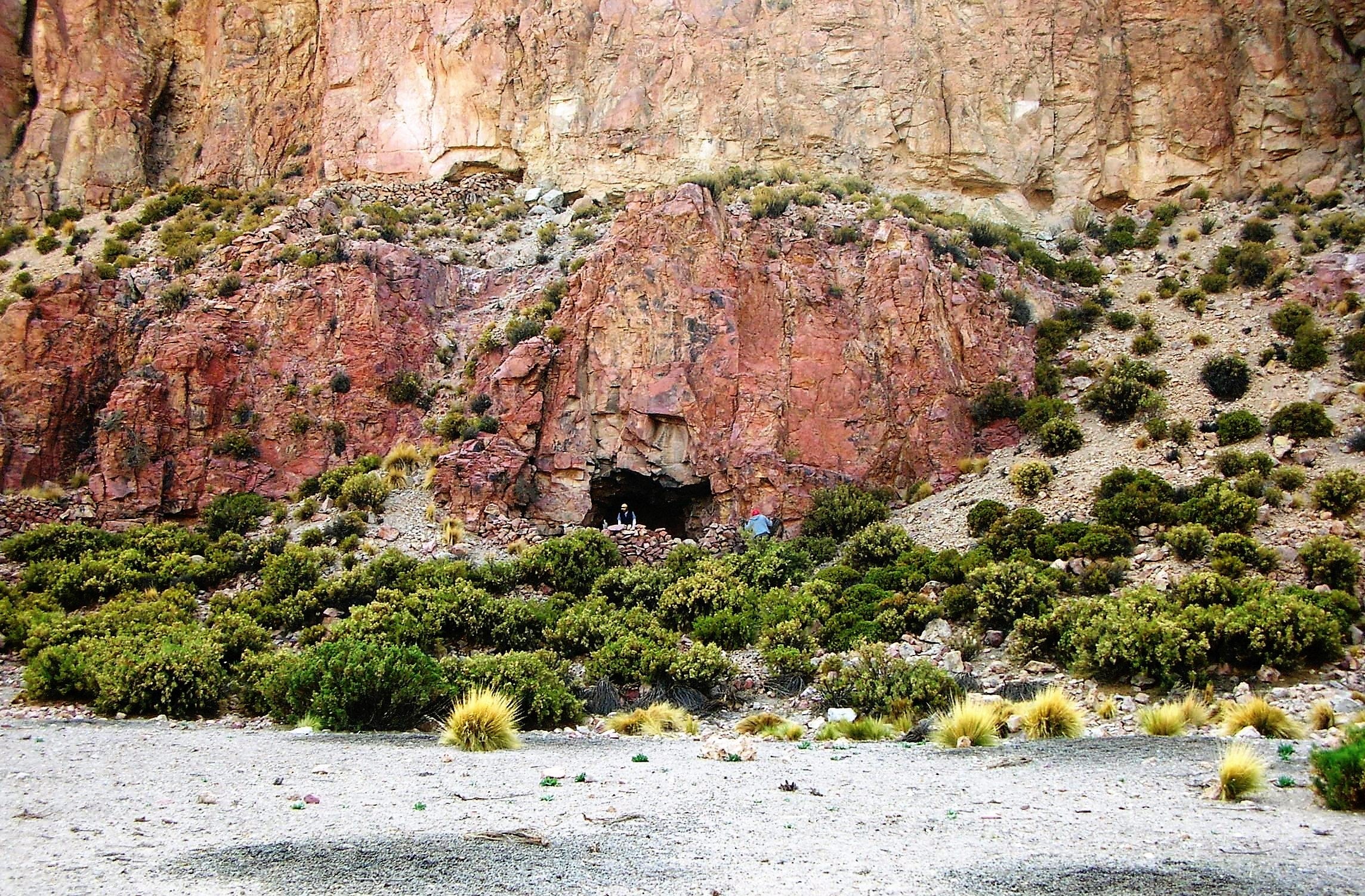 The Cueva del Chileno in Bolivia where the bundle was found. (Image: Juan V. Albarracin-Jordan and José M. Capriles)

“This is the first evidence of ancient South Americans potentially combining different medicinal plants to produce a powerful substance like ayahuasca,” said Miller in a press release from the University of California, Berkeley. “Our findings support the idea that people have been using these powerful plants for at least 1,000 years, combining them to go on a psychedelic journey, and that ayahuasca use may have roots in antiquity.”

That this ancient ritual bundle was once used to store drug-related paraphernalia is of little doubt. Indeed, its contents wouldn’t look terribly out of place in a modern drug-infused setting. Among the various artefacts pulled from the leather bag were two finely carved wooden tablets on which plant-based substances were ground down into snuff. The bag also contained an ornately decorated wooden snuffing tube for snorting the hallucinogenic compounds. Other items in the bag included spatulas made from llama bone, a colourful headband, dried plant stems held together by strings, and a remarkable pouch stitched together from the snouts of three Andean foxes. In a press release, Miller described the fox-snout pouch as “the most amazing artefact I’ve had the privilege to work with.” 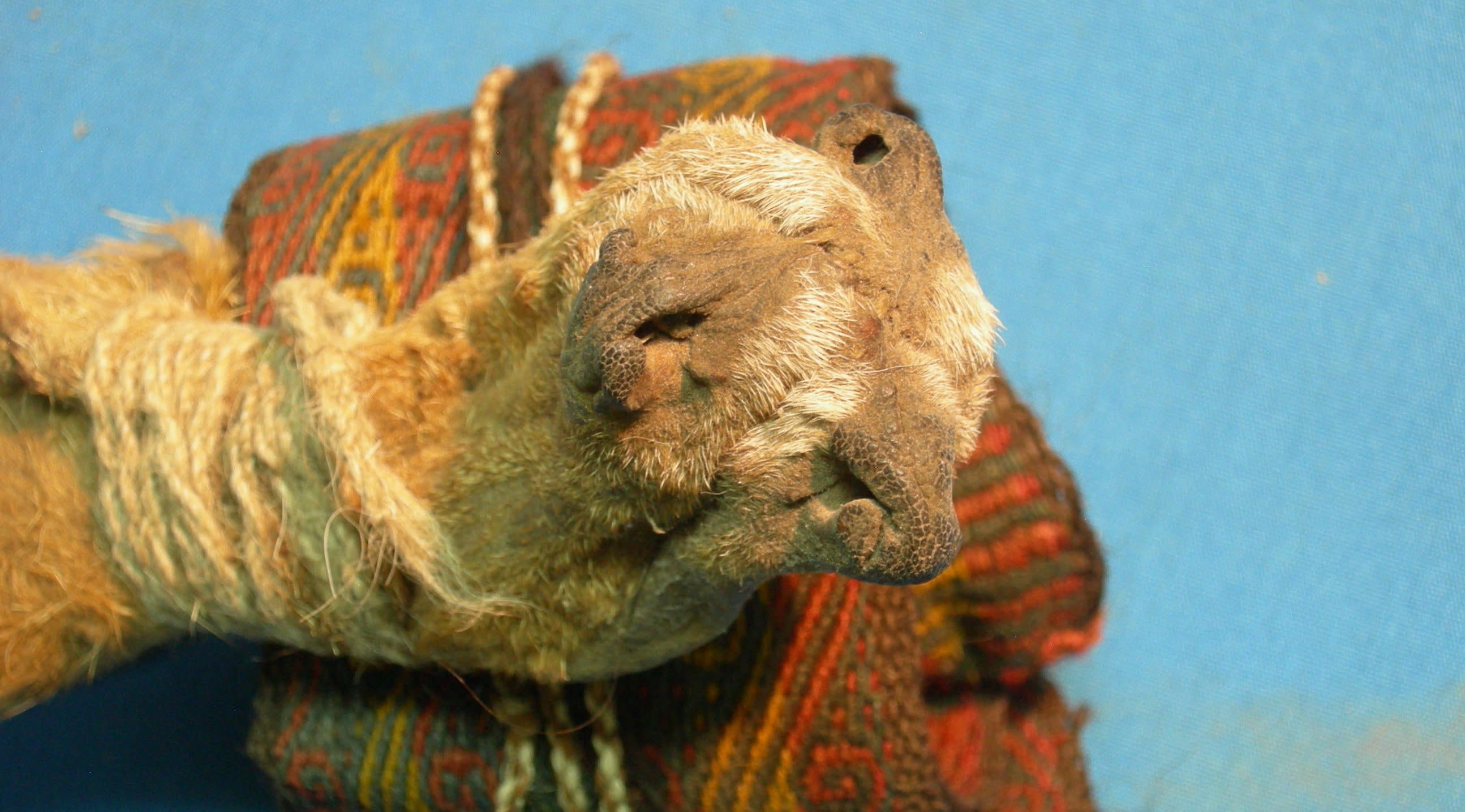 These items, which date to the pre-Incan Tiwanaku civilisation (550 AD to 950 AD), were in very good shape owing to the arid conditions in the Andes. Radiocarbon dating placed the artefacts to between 905 to 1170 AD.

A chemical analysis of the trace compounds found within the fox-snout pouch and on the plant stems revealed no less than five psychoactive compounds: cocaine, benzoylecgonine (a metabolite of cocaine), harmine, bufotenine, and dimethyltryptamine (DMT). A sixth possible compound, one related to psilocin, was also detected, though the chemical signal was less conclusive. It’s now the largest number of psychoactive compounds found in a single bundle, according to the new study.

As noted, DMT and harmine are the active, mind-altering ingredients of ayahuasca. The “co-occurrence of harmine, abundant in yage (Banisteriopsis caapi), and dimethyltryptamine, found in vilca and chacruna (Psychotria viridis), suggests that multiple plants may have been used to make ayahuasca, which can induce vivid hallucinogenic trips,” noted the press release. 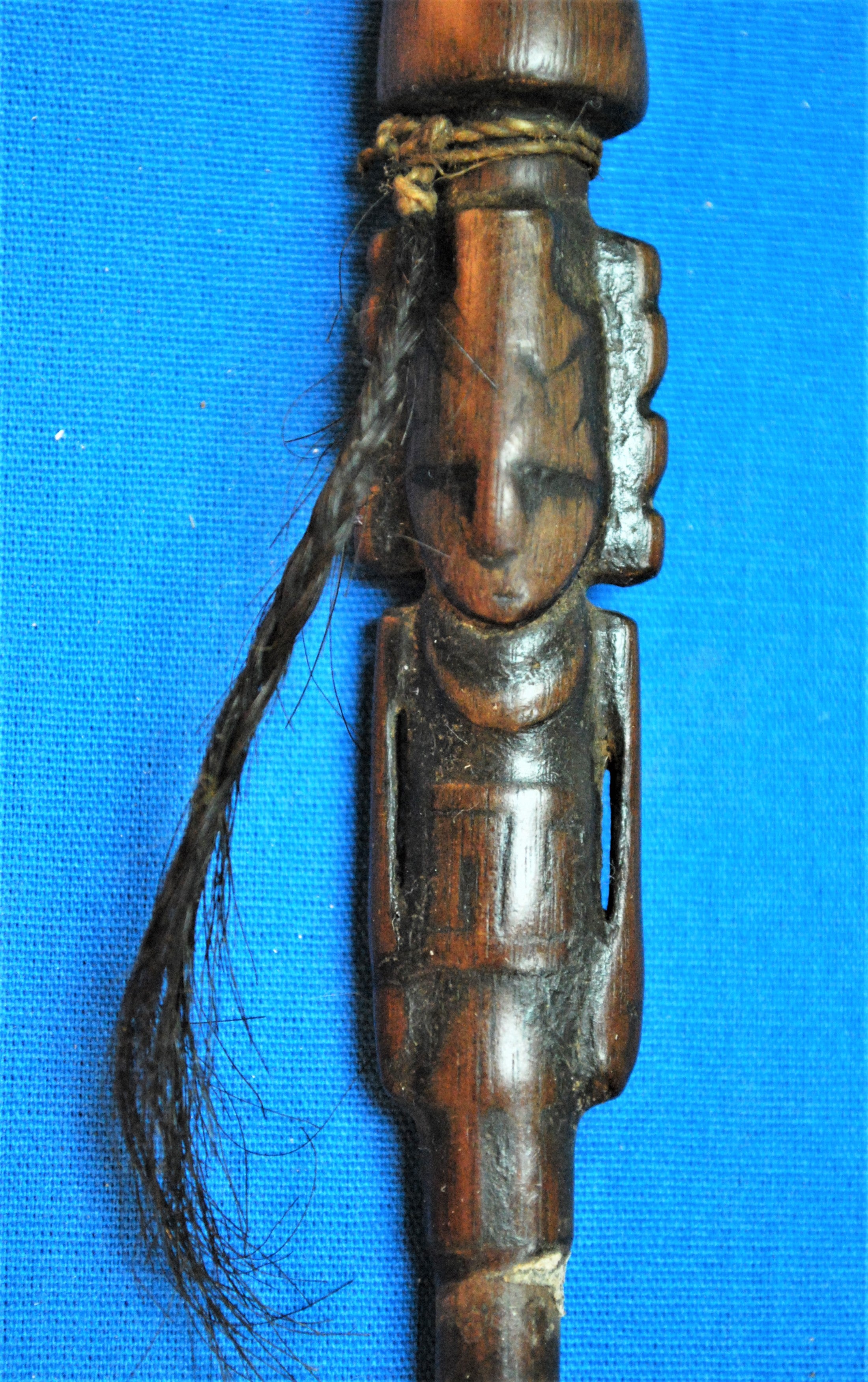 Interestingly, the plants required to produce these compounds aren’t able to grow in this location due to the high altitude. The researchers speculated that shaman who owned this bundle either personally gathered the materials or collected them through extensive trading networks.

“A lot of these plants, if consumed in the wrong dosage, could be very poisonous,” said Miller. “So, whoever owned this bundle would need to have had great knowledge and skills about how to use these plants, and how and where to procure them.”

Unfortunately, no human remains were found at the site, so we know very little about the owner of this drug kit. More archaeological evidence will be required to add colour to this aspect of the story.

As to the function or purpose of these hallucinogenic substances among the Tiwanaku people, it “may have been connected to a complex religious tradition with deep roots in earlier Andean and Amazonian cultures,” wrote the authors in the new paper. Shamans acted as “intermediaries between realms, entering into altered mental/physical states to connect living people with venerated ancestors thought to exist in other realms,” and presumably, “the consumption of psychoactive substances facilitated the communication between ritual specialists [i.e. shamans], ancestors, and deities.”

A final note about that intriguing fox-snout pouch: “There are civilisations who believe that, by consuming certain psychotropic plants, you can embody a specific animal to help you reach supernatural realms, and perhaps a fox may be among those animals,” Miller said.

Or, perhaps there’s a connection between the fox snouts and the snorting of the psychedelic snuff. Whatever the meanings behind these various symbolic objects, the findings provide some fascinating clues to how and when psychedelics were used in human pre-history.