All 15 people found in a Bronze Age mass grave in southern Poland were killed by a blow to the head, yet their bodies were buried together with great care and consideration. Genetic evidence now suggests these individuals were members of the same extended family—a finding that’s casting new light on a tumultuous era in European prehistory.

This tragic grave was discovered near the southern Polish village of Koszyce in 2011. The grave, radiocarbon dated to between 2880 and 2776 BCE, contained the remains of 15 men, women, and children, along with valuable grave goods. All skeletons exhibited severe cranial trauma. The reason for the killings could not be determined, with archaeologists at the time suggesting these individuals were murdered during a raid on their settlement.

To shed more light onto this mystery, a team of researchers from the University of Copenhagen, the University of Aarhus, and the Archaeological Museum in Poznan, Poland, conducted a genetic analysis of the remains. The results, published late last week in the Proceedings of the National Academy of Sciences, suggests all but one of these individuals were closely related, and that the individuals were positioned in the grave according to their kin relationships.

All 15 skulls exhibited fatal cranial fractures. No defensive wounds, such as injuries to the upper limbs, were detected, which suggests these individuals were captured and executed, and not killed in hand-to-hand combat, according to the new study. 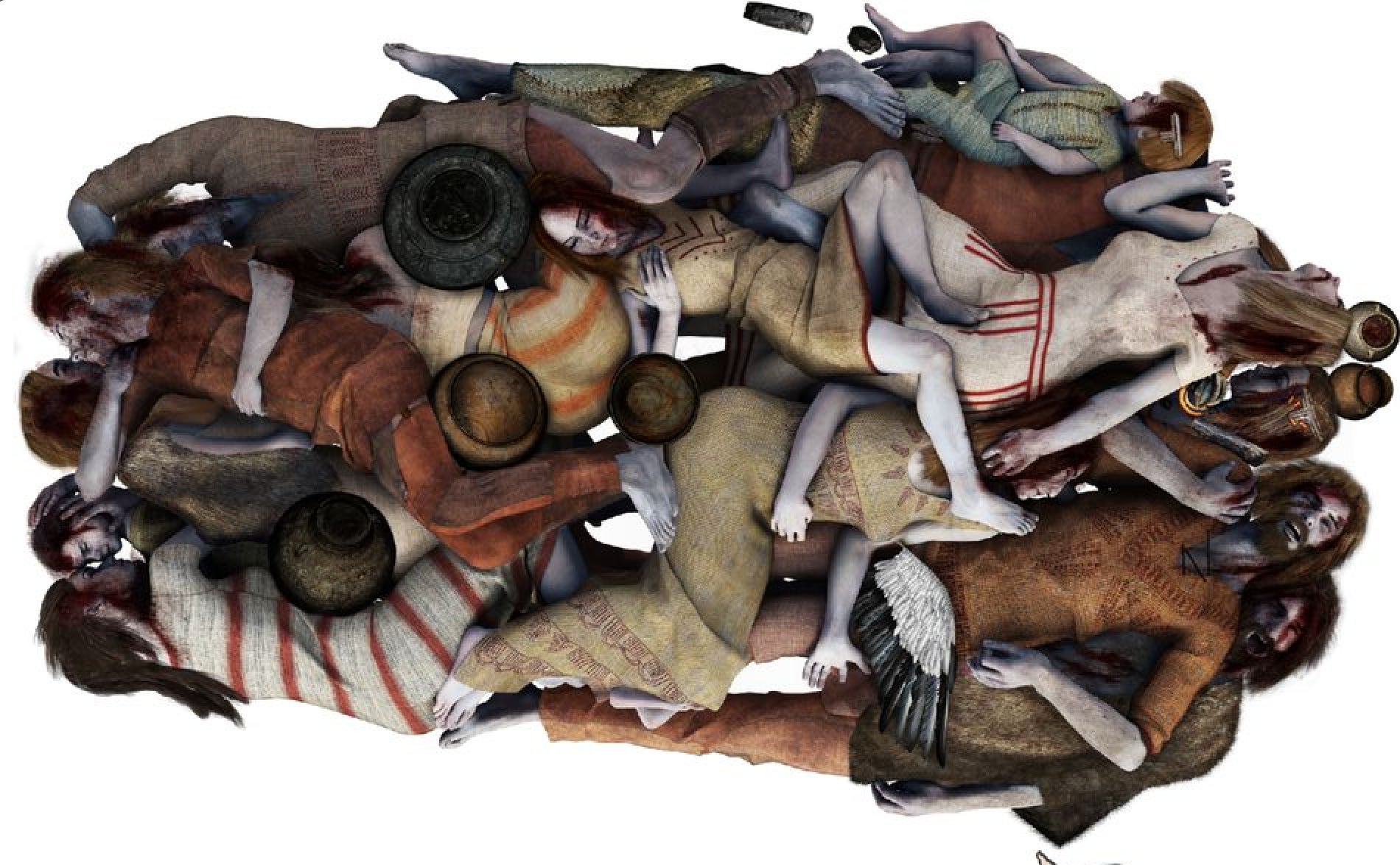 Artist’s reconstruction of the grave, showing how the bodies were positioned. (Illustration: Michał Podsiadło)

Importantly, the new evidence suggests these people, who are associated with the Globular Amphora Culture (a group that lived in central Europe from around 3300 to 2700 BCE), were not genetically related to a neighbouring group known as the Corded Ware Culture. The researchers still aren’t sure what happened, but they guess that the killings were territorial in nature. This particular time period marked the transition from the Late Neolithic period to the Bronze Age, as early farmers were developing more complex societies. But it was also a turbulent and violent time, as European cultures were coming into contact with incoming cultures from the east, including from the Asian steppe. The expansion of the Corded Ware groups may have resulted in this gruesome incident.

“We know from other gravesite discoveries that violent conflicts played out among different cultural groups at this time,” archaeologist Niels Johannsen of Aarhus University said in a University of Copenhagen press release. “However, they have never been as clearly documented as here. All the violence and tragedy aside, our study clearly demonstrates that family unity and care meant a lot for these people, some 5,000 years ago, both in life and in death.”

Indeed, the new genetic analysis identified these 15 individuals as part of a large extended family. Overall, four nuclear families were documented—mothers and children for the most part. The individuals were buried according to family relationships; mothers were buried with their children, and siblings were positioned next to each other. The oldest individual, for example, was buried alongside her two sons, aged 5 and 15. A woman in her early 30s was buried with her teenage daughter and 5-year-old son. Four boys, all brothers, were laid down next to each other. Clearly, the bodies were buried by someone who knew the deceased.

Importantly, fathers and older male relatives were missing from the grave, “suggesting that it might have been them who buried their kin,” wrote the authors in the new study.

“Our suggestion is that they weren’t at the settlement when the massacre occurred and that they returned later, and subsequently buried their families in a respectful way,” said biologist Morten Allentoft of the University of Copenhagen in a statement.

Only one individual, an adult female, was not genetically related to anyone in the group. However, she was positioned in the grave close to a young man, which suggests “she may have been as close to him in life as she was in death,” wrote the authors.

“The presence of unrelated females and related males in the grave is interesting because it suggests that the community at Koszyce was organised along patrilineal lines of descent, adding to the mounting evidence that this was the dominant form of social organisation among Late Neolithic communities in Central Europe,” the authors wrote in the study.

Typically, patrilineal societies are associated with the practice of women marrying outside of their social group and residing with the man’s family (i.e. female exogamy). Several previous studies have suggested that patrilineal domestic arrangements did in fact prevail in several parts of Central Europe during the Late Neolithic, according to the new paper.

A brutal episode from a particularly brutal period in human history. It’s a scene that wouldn’t be out of place on Game of Thrones, but unfortunately this tragedy was all too real.