An incredible 99-million-year-old chunk of amber contains several trapped marine gastropods, including an extinct ammonite, according to a new paper.

Amber is fossilised tree resin, and occasionally it preserves bits of plant and animal matter, like insects and bird feathers. But in this case, scientists from China, the United Kingdom, and the United States uncovered a rare example of marine animals trapped in amber. Not only is it exciting to find the shell of an ammonite—an extinct mollusc usually only seen as an imprint in rock—but it also offers scientists another way to establish when the amber was created. 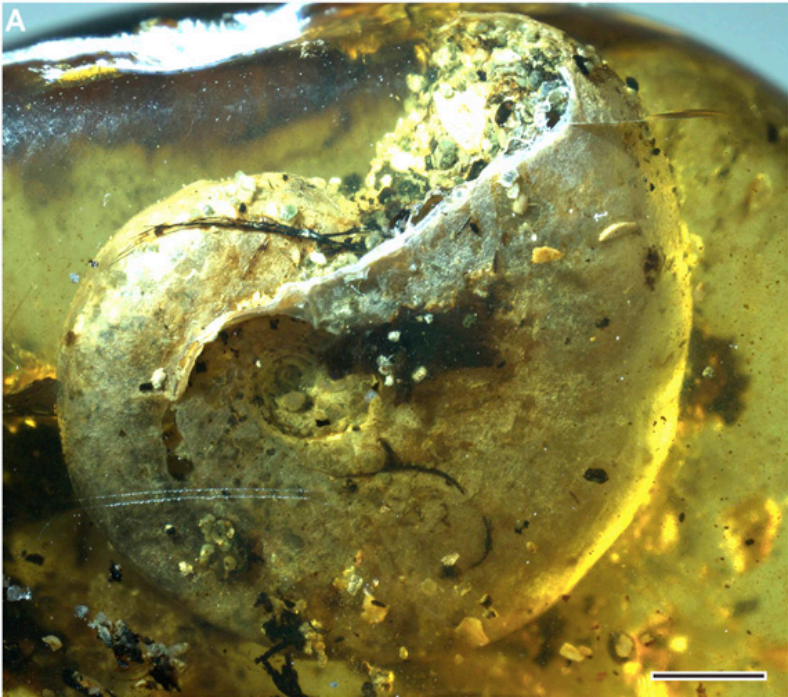 The specimen came from an amber mine in northern Myanmar, a region famous for the diverse array of species found in its amber deposits. It’s a little over 1 inch long, a third of an inch wide, and 1 inch high, and weighs as much as six paperclips. At least 40 forest-dwelling invertebrate arthropod species were trapped inside the chunk of hardened goo, including mites, spiders, millipedes, cockroaches, and wasps. But it also contained at least four marine snail shells on top of the ammonite.

Ammonites were a mollusc that likely went extinct during the event that ended the Cretaceous period and killed the dinosaurs. They’re prized for their beauty as well as their value to science, since they serve as good reference tools to determine the age of the rock they were found in. They’re a ubiquitous symbol for marine palaeontology, and there’s even a Pokémon named after them, Omanyte.

The researchers used an x-ray microscope in order to image the ammonite inside the amber. It appeared to be a juvenile with a shell diameter of 12 millimetres (a little less than half an inch). The shell was partially damaged, implying that the creature had died before it was included in the amber, according to the paper published in the Proceedings of the National Academy of Sciences.

It was an exciting find. “My first thought when I saw it was, ‘This is unreal,’” Phil Barden, assistant professor at the New Jersey Institute of Technology who reviewed the paper, told Gizmodo. “To see one trapped in amber—I was stunned.” Scientists generally consider fossils from the Burmese amber deposits to be 100 million years old, and the inclusion of the ammonite helps erase any doubt that they may have had, Barden said. It also lets scientists see the well-known ammonite in a new way. 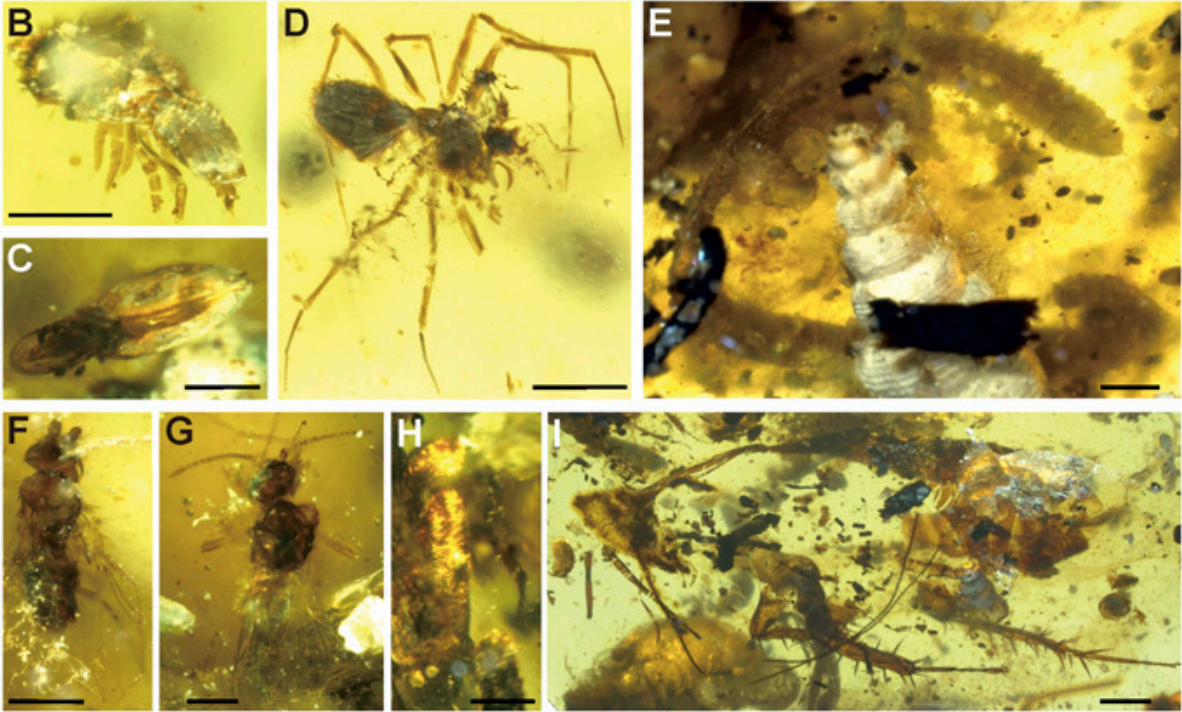 Other invertebrates found in the amber. (Photo: Yu et al/PNAS 2019)

How does a marine mollusc end up in tree amber? Well, it requires a lot of luck. Typically it’s insects that land in the resin (and there are lots of samples of insects in amber) but occasionally something weird might happen. Previous research has shown that the Burmese amber deposits come from coniferous forests, which can occur on coasts. Perhaps the shell sat on the sandy beach near a tree until the tree covered it in amber.

This specimen also lets scientists dream about what else might be hiding in an amber mine somewhere. Perhaps some amber has even preserved ammonite soft tissue. There’s so much amber, containing so many specimens, and the shore is such a dynamic place, that there’s no telling what else we might find.