Our Moon features a nearside and far side with dramatically different geological features. This anomaly has puzzled scientists for years, but new computer simulations suggest the Moon’s asymmetric disposition can be traced back to an ancient collision with another object—possibly a dwarf planet.

For thousands and thousands of years, humanity had no idea what the Moon’s far side looked like. Our natural satellite is tidally locked to Earth, forcing us to gaze perpetually upon one of its two hemispheres. Beginning with the Apollo missions, however, we finally acquired the capacity to investigate the Moon’s unseen face. To the surprise of astronomers, the Moon’s two lobes were found to exhibit striking differences in topography, crustal thickness, and chemical composition. Scientists figured this pronounced asymmetry was the result of ancient, but unknown, physical processes. 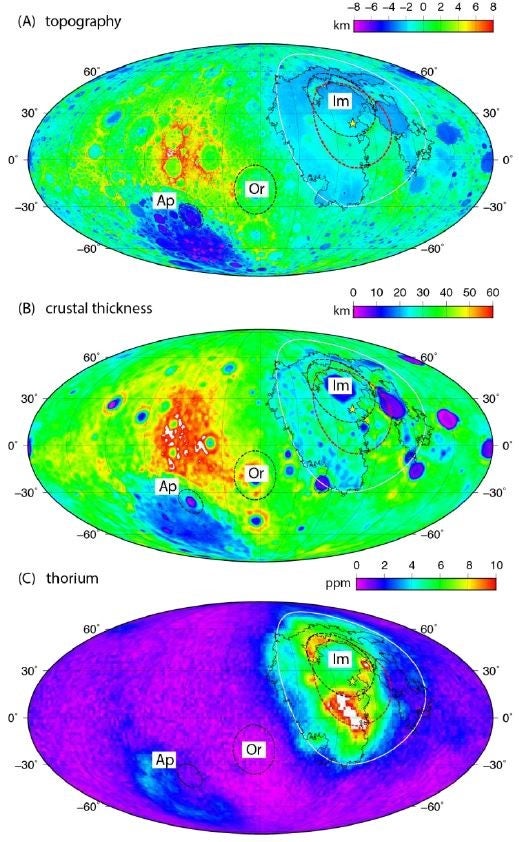 Maps showing differences in lunar topography (A), crustal thickness (B), and thorium distribution (C). The star at the top right shows the possible point of impact on the nearside. (Image: JGR: Planets/Zhu et al. 2019/AGU)

New research published in the Journal of Geophysical Research: Planets suggests this unexpected asymmetry was caused by an ancient collision with a rather large object, likely a dwarf planet.

“This is a paper that will be very provocative,” Steve Hauck, a professor of planetary geodynamics at Case Western Reserve University who wasn’t involved with the study, said in a press release. “Understanding the origin of the differences between the nearside and the far side of the Moon is a fundamental issue in lunar science,” Hauck, who is the editor-in-chief of JGR: Planets, added.

The lead author of the new study, Zhu Meng-Hua of the Space Science Institute at Macau University of Science and Technology, had a hunch the near side-far side asymmetries were the result of celestial collision after looking at data gathered in 2012 by the Gravity Recovery and Interior Laboratory (GRAIL) mission. This data showed that the far side crust was about 10 kilometres (6 miles) thicker than the crust on the near side. What’s more, the far side also exhibited an extra layer of crust consisting of materials rich in magnesium and iron.

Using the GRAIL data, Zhu ran a series of computer simulations to test the hypothesis that a giant collision left the Moon lopsided. In all, 360 different computer models were conducted to determine if an impact could produce the same kind of physical features observed on the Moon today. 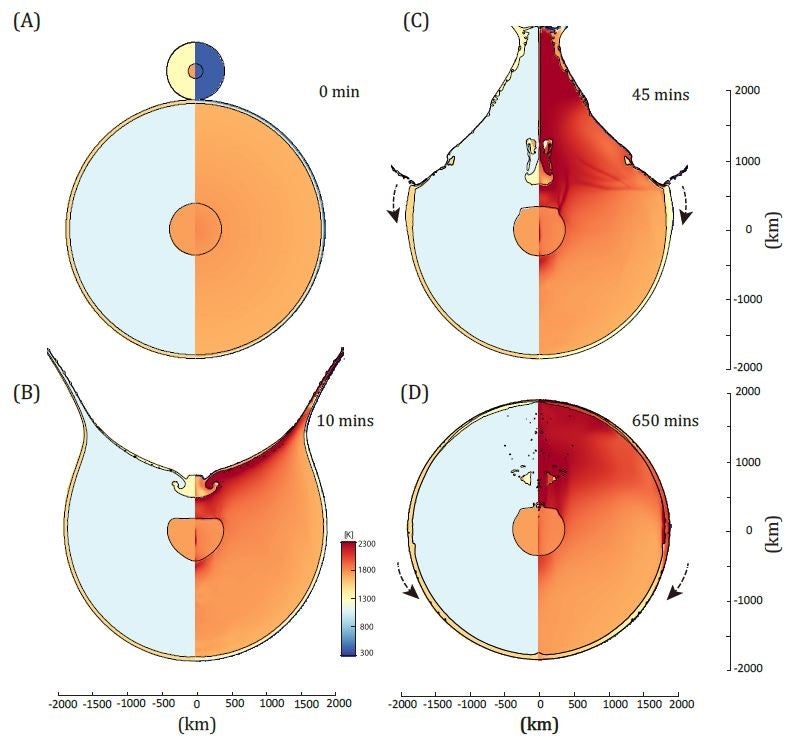 The modelled impact of an object 780 kilometres wide containing a 200-kilometre wide iron core hitting the Moon at 22,500 km/h (14,000 mph). The right halves represent the temperature variations during the impact process, and the black arrows in (C) and (D) show the movement of debris around the Moon. (Image: JGR: Planets/Zhu et al. 2019/AGU)

Both of these scenarios kicked up copious amounts of debris that rained back down onto the lunar surface, particularly on the side opposite to the collision. The falling material buried the primordial crust on the far side with a layer measuring 5 to 10 kilometres (3 to 6 miles) thick, which is consistent with the observations made by GRAIL. The authors of the new study said the offending object was likely a dwarf planet in orbit around the Sun and not a second Earth moon.

Importantly, the new study has the potential to solve a lingering mystery about differences observed in isotopes of potassium, phosphorus, and various rare-earth elements between the Earth and Moon. This new theory happily explains this discrepancy by suggesting the elements arrived later to the Moon via the impact.

Excitingly, the new result could also explain similar asymmetric features seen on other planets in the solar system, including Mars.

“Indeed, several planets have hemispherical dichotomies, yet for the Moon we have a lot of data to be able to test models and hypotheses with, so the implications of the work could likely be broader than just the Moon,” said Hauck.

It’s an intriguing conclusion, but one heavily reliant upon computer models. Other researchers should run their own simulations, preferably with data gathered from GRAIL and other sources. It would be interesting to see, for example, if the fallout patterns seen in the new study can be matched by others. Future research should also focus on the presence of “foreign” material on the Moon (i.e. the remnants of the purported dwarf planet) that could further corroborate the findings of the new paper. Until then, the new theory will have to remain just that—a theory.