Adorable Jurassic Dinosaur May Have Flown With Bat-Like Wings

During the Jurassic period, various dinosaurs experimented with different forms of powered flight. The discovery of a new dinosaur species in China suggests some of these pioneering flyers evolved webbed fingers and an elongated forelimb, allowing them to fly in a distinctly bat-like fashion. 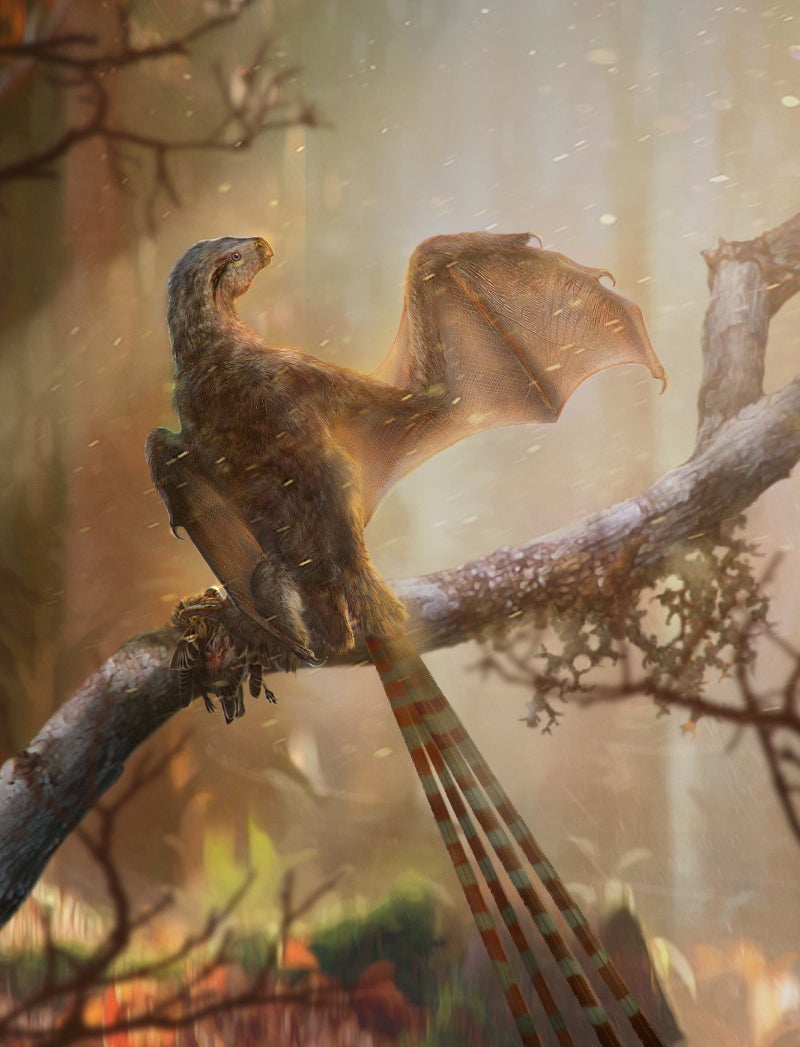 Its fossilised impressions—including traces of feathers and soft-tissue—were pulled from a 163-million-year-old rock formation in China’s Liaoning province. Translated from Latin, its name means “pteryx-like with elongated forelimb.” The word “pteryx” is in reference to its distinctly pterosaur-like, membranous wings, but make no mistake—this creature was most certainly a dinosaur, not a flying lizard.

More specifically, Ambopteryx was a scansoriopterygid non-avian dinosaur (that’s a mouthful, but it’s actually quite easy to pronounce: skan-sor-ee-op-ter-ee-jid). Scansoriopterygids were a tiny group of feathered dinosaurs that weighed less than a pound, had long hands and fingers, and likely spent their days hanging around in trees.

Back in 2015, palaeontologists in China found a rather remarkable fossil of a new species of scansoriopterygid dinosaur, dubbed Yi qi (meaning “strange wing”). Analysis of the remains suggested membranous wings that were held in place by a long, rod-like, pointed wrist bone known as a styliform. This type of wing—the result of webbing around elongated fingers—had never been seen before in a dinosaur (though it does exist in pterosaurs, bats, and flying squirrels). This interpretation of the fossil, however, is controversial, with some palaeontologists claiming Yi qi didn’t actually have wings.

“The Mesozoic fossil record of China could certainly be considered the eighth wonder of the world.”

The recent discovery of Ambopteryx, therefore, is quite significant. The authors of the new study, led by Min Wang from the Chinese Academy of Sciences, say it’s further proof that some scansoriopterygids did in fact feature membranous wings similar to those seen in pterosaurs and modern bats. As to whether or not this pigeon-sized creature flapped its wings, glided through the air, or could even fly at all remains an open question.

“The Mesozoic fossil record of China could certainly be considered the eighth wonder of the world,” palaeontologist Alida M. Bailleul, a postdoctoral research fellow at the Chinese Academy of Sciences’ Institute of Vertebrate Palaeontology and Palaeoanthropology, wrote in an email to Gizmodo. “In the last decades, fossil dinosaurs and birds have been unearthed from China, not only with their bones, but also with amazing soft-tissue preservation, including remnants of eyes, internal organs such as ovarian follicles and lungs, feathers, or skin. This new specimen of scansoriopterygid is preserved with a wing membrane, which adds another example of amazing soft-tissue preservation,” said Bailleul, who’s not involved with the new study.

To which she added: “The presence of this wing membrane in a second species—after Yi qi—adds further support to the hypothesis that these non-avian dinosaurs could fly.” 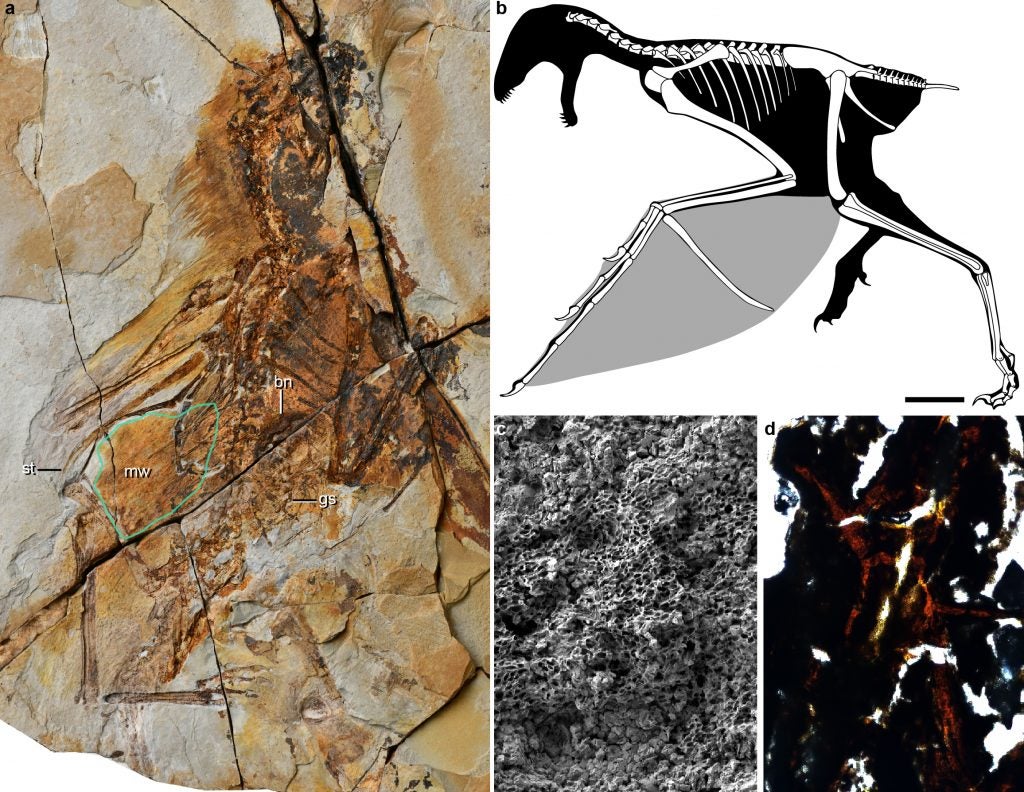 Analysis of the well-preserved Ambopteryx fossil showed it was similar to Yi qi but with slight differences. Both had similar membranous wings and styliform, but Ambopteryx had a wider forelimb and a shorter tail with fused vertebrae at the tip, among other differences.

“These fossils demonstrate that, close to the origin of flight, dinosaurs closely related to birds were experimenting with a diversity of wing structures,” wrote the authors in the new study. Indeed, these experimental wing styles appeared near the time when an evolutionary split occurred between scansoriopterygid dinosaurs and those that would eventually evolve into birds. The two groups “travelled along very different paths” to becoming flyers, the authors wrote, but the “membranous wings supported by elongate forelimbs that are present in scansoriopterygids probably represent a short-lived experimentation with [flying] behaviour.” Eventually, feathered wings were “ultimately favoured during the later evolution” of avian dinosaurs, the authors wrote. 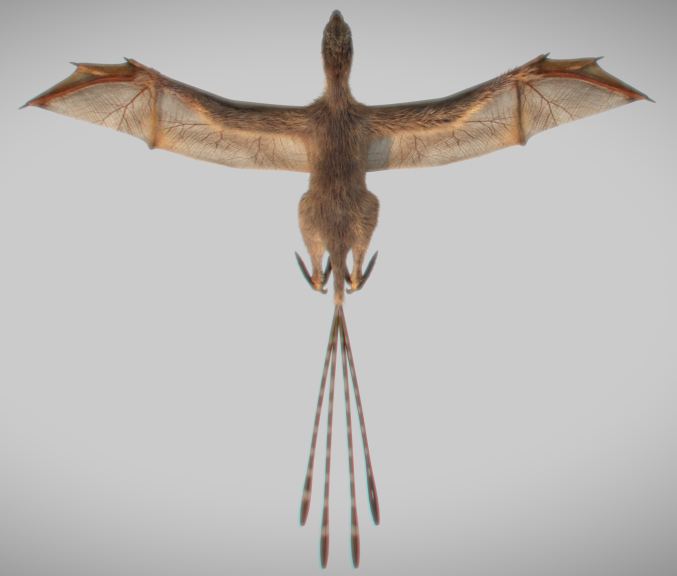 Palaeontologist Luis Chiappe, director of the Dinosaur Institute at the National History Museum of Los Angeles County in the US, said the newly described species “adds to our meagre knowledge of a bizarre group of dinosaurs related to birds.” That said, he’s a bit sceptical about the interpretation presented by the researchers.

“I’m not fully convinced that this fossil—and the previous ones—document unconvincingly that these weird dinosaurs had a membranous wing-like bats and pterosaurs,” Chiappe told Gizmodo via email. “I hope future discoveries can demonstrate this without any doubt. Nonetheless, this is an important paper that fills a void in our knowledge of a critical moment in avian evolution.”

For Bailleul, the discovery of the membranous wing was as unambiguous as it was exciting.

“The authors studied it under a scanning electron microscope and found some melanosomes commonly present in the superficial layers of the skin in living animals,” she explained to Gizmodo. “The most logical next step is to further analyse this tissue from a microscopic, chemical and molecular perspective and compare it the tissues of [living] flying animals, such as bats, flying squirrels, and birds. Depending on the preservation, it may give further insights into the flight mode of this incredible new specimen.”

No doubt, further research into this fossil could tell us more about this fascinating species and whether or not it featured membranous wings and was capable of flight. Discovering some new scansoriopterygid fossils would also help. It’s still early days, but the clues are starting to appear.