Unusual and abundant glassy spheres found packed within the beach sands near the Japanese city of Hiroshima are remnants of the 1945 atomic bomb explosion, according to new research.

On 6 August 1945, a US B-29 bomber dropped an atomic bomb over Hiroshima. In an instant, some 80,000 people were killed. The explosion and ensuing firestorms razed an area measuring more than 4 square miles (10 square kilometres), damaging upwards of 90 per cent of all the structures in the city.

But what goes up must eventually come down. New research published this week in the science journal Anthropocene is “the first published record and description of fallout resulting from the destruction of an urban environment by atomic bombing,” according to the authors of the new paper. The works shows that the nearby beaches on the Motoujina Peninsula in Hiroshima Bay are surprisingly littered with this fallout debris up to a depth of around 4 inches (10 centimetres). 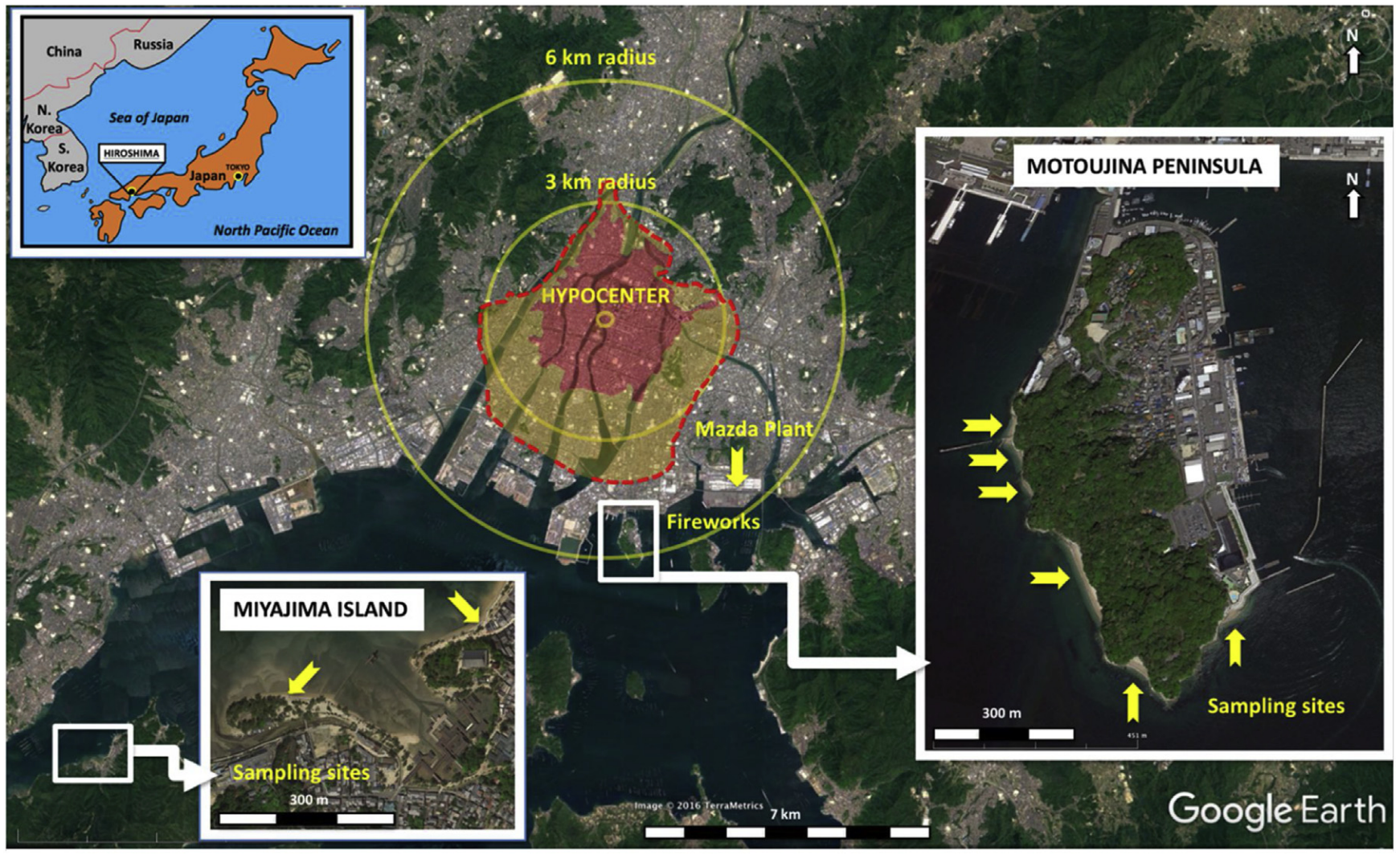 Described as “millimetre-sized, aerodynamically-shaped debris,” these particles included glass spheroids, glass filaments, and melted composite compounds. The debris is reminiscent of the spherical particles found in the ground layer associated with the meteor impact that triggered a mass extinction 66 million years ago, and also the particles found in the area where the U.S. first tested the atomic bomb, according to the paper’s lead author, geologist Mario Wannier. Unlike these particles, however, the ones found near Hiroshima were packed with materials such as iron, steel, and rubber.

“In the surprise of finding these particles, the big question for me was: You have a city, and a minute later you have no city. There was the question of: ‘Where is the city—where is the material?’ It is a trove to have discovered these particles. It is an incredible story,” Wannier said in a Berkeley Lab statement.

Back in 2015, Wannier was sifting through particles of sand he had pulled from a beach just outside the city of Hiroshima. He was looking for marine life, but the weird glassy spheres in the mixture reminded him of the particles found in sediment samples from the 66-million-year-old Cretaceous-Paleogene (K-Pg) time period. The glassy spheres were between 0.5 millimetres to 1 millimetre in diameter. Some were fused together, and others were shaped like a teardrop. But unlike the spheroids pulled from the K-Pg sediment, these particles contained a surprising diversity of materials coated in multiple layers of silica. Intrigued, Wannier returned to the area to collect more beach samples.

In each kilogram of sand taken from Motoujina Peninsula beach, Wannier and his University of California, Berkeley colleagues found that spheroids and other unusual glass particles made up 0.6 to 2.5 per cent of the total sample. Extrapolating from this, that means each square kilometre of beach down to a depth of around 10 centimetres contains 2,300 to 3,100 tonnes of these particles. That is, the stuff that once made up the city of Hiroshima.

Using both conventional and scanning electron microscopes, and with the help of UC Berkeley mineralogist Rudy Wenk, the researchers detected six distinct morphological types of particles, ranging from clear glass to rubber-like substances. The team found evidence of aluminium, silicon, calcium, carbon, and oxygen, and also traces of building materials, such as pure iron and steel. The composition of this debris is consistent with materials that were common in Hiroshima at the time, including concrete, marble, stainless steel, and rubber.

These particles formed in extreme conditions, in which temperatures reached 3,330 degrees Fahrenheit (1,830 degrees Celsius), according to the research. The tremendous explosion turned ground materials into liquid, blasting the melted material into the sky. Once at a high elevation, the various particles smashed into each other, resulting in the complex agglomerations observed by the researchers.

The authors of the new study admitted that some of this debris could have been caused by other processes, such as a fire at a nearby Mazda plant in 2004 and a local site where fireworks are displayed annually. That said, “no alternative scenario to the A-bomb explosion can provide a coherent explanation for all our observations,” the authors noted in the new study, concluding that:

This study interprets the large volumes of fallout debris generated under extreme temperature conditions as products of the Hiroshima August 6th, 1945 atomic bomb aerial detonation. The chemical composition of the melt debris provides clues to their origin, particularly with regard to city building materials. This study is the first published record and description of fallout resulting from the destruction of an urban environment by atomic bombing.

As noted, similar spheroids were found at the Trinity test site in New Mexico. But these glasses, dubbed trinitite, lacked the chemical compounds found in the samples taken near Hiroshima. Accordingly, the authors of the new study have dubbed the new material “Hiroshimaites” on account of its distinctive and diverse chemical composition.

Looking ahead, the researchers would like to explore the soils near Nagasaki to determine if similar particles exist there.