The more moving parts a machine has, the more likely it is to eventually fail. It’s an especially problematic rule of thumb for aircraft given the fact that a mechanical failure during a flight can be catastrophic. To help remedy this, BAE Systems recently tested a unique plane that replaces its wing’s adjustable ailerons with powerful blasts of air to steer the craft.

The MAGMA unmanned aerial vehicle looks like many of the modern, pilot-less drones in use by military agencies around the world. But instead of flying reconnaissance or bombing missions, it’s used to safely test a revolutionary new control system that could one day make all aircraft safer to fly and maintain. 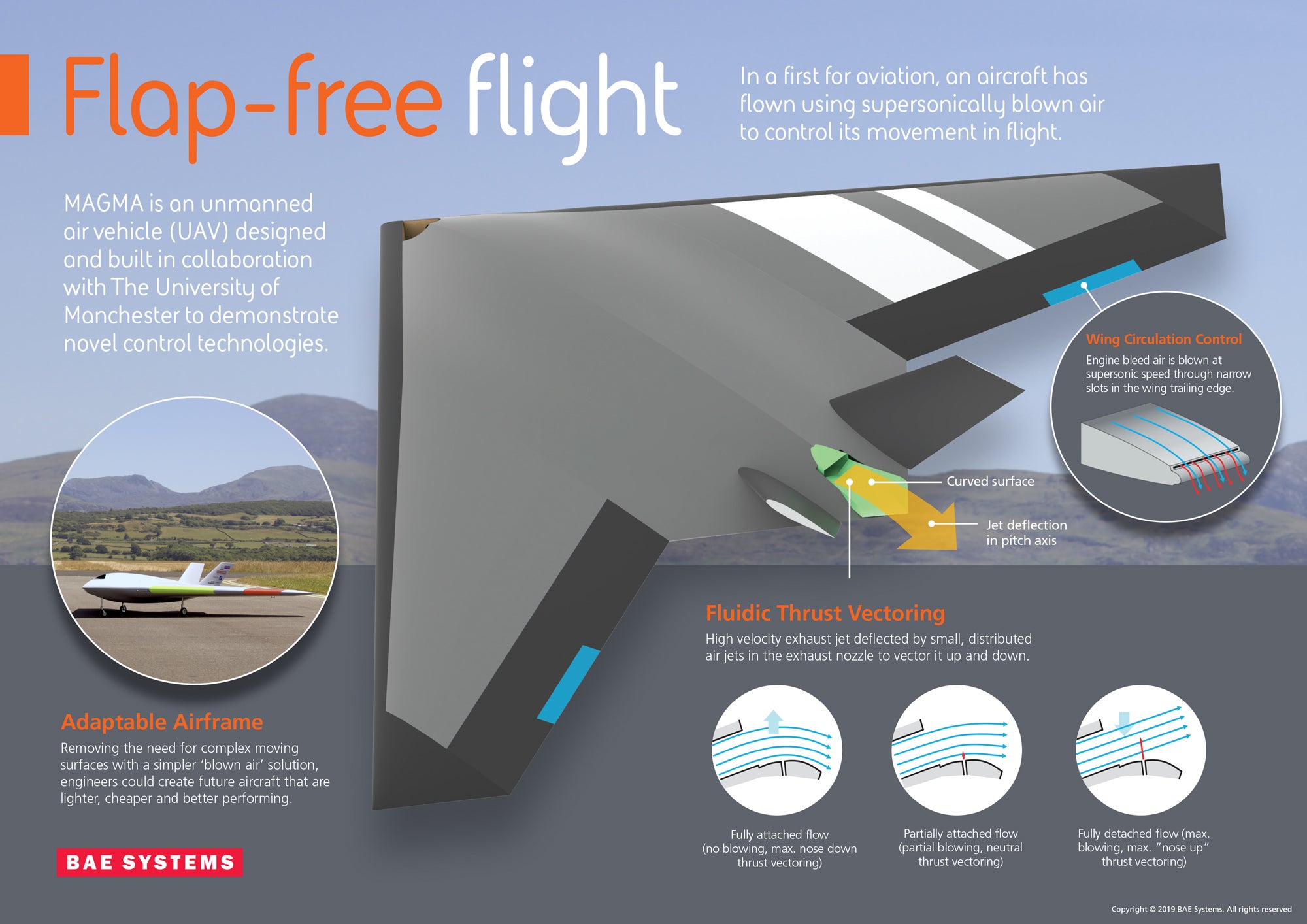 Developed in collaboration with researchers from The University of Manchester, the MAGMA craft actually demonstrates two different approaches to using moving air to steer a plane. The first, Wing Circulation Control, directs some of the air generated by the plane’s powerful jet engine through thin vents located on the trailing edge of the wings, where you’d normally find the ailerons that can raise and lower. When the vents are open, the blasts of air, moving at supersonic speeds, change the direction of air moving over the aircraft’s wings during flight, which causes the plane to nose up, or roll, depending on how many of the vents are active.

The other approach successfully tested on the MAGMA aircraft is called Fluidic Thrust Vectoring which instead uses a series of vents inside the jet engine’s rear nozzle to control the angle of thrust as it exits the craft, which in turn allows the plane to manoeuvre. It’s similar to how the Lockheed Martin F-22 Raptor can change the direction of its thrust for added manoeuvrability using a series of movable flaps, but this approach reduces the number of mechanical components and moving pieces to accomplish the same thing.

In addition to simplifying the design of at least part of an aircraft, which can make them cheaper to maintain and more reliable in the long run, this approach can also help reduce a plane’s radar signature. Fewer moving parts means less open seams on the body of the aircraft, which helps to increase its stealthiness. As a result, the military will undoubtedly be the first to adopt technology like this, but that will help hasten the research and development so that it will hopefully start showing up on commercial aircraft and making air travel just a little safer. [BAE Systems]