A researcher seeking access to the FBI’s files on Adrian Lamo—a deceased hacker best known for informing on whistleblower Chelsea Manning—filed a lawsuit last week citing the bureau’s failure to properly respond to her request.

Camille Fassett, a researcher at data collective Lucy Parsons Labs, filed a complaint in the Washington, DC District Court after the FBI violated the Freedom of Information Act (FOIA) by failing to respond to her request in the time allotted under the statute. Fassett is seeking access to any records the bureau may have accumulated on Lamo, once nicknamed the “Homeless Hacker.”

Prior to informing on Manning, Lamo gained notoriety for hacking the New York Times in 2003. He died in the US state of Kansas, in March 2018, of causes unknown. The US Privacy Act, which restricts the bureau and other agencies from releasing files on US citizens for reasons of privacy does not apply to the deceased. It’s common practice for reporters to request access to the FBI files of famous individuals after they’ve died.

Lamo famously cooperated with the US Defense Department and identified Manning as the source of classified leaks published by WikiLeaks—more than 725,000 documents including military battlefield reports, US State Department cables, and five Guantanamo Bay detainee profiles.

A former US Army intelligence analyst, Manning was ultimately imprisoned between 2010 and 2017, first at a military base in Kuwait, then at the Marine Corps brig in Quantico in the US state of Virginia, and finally at the Fort Leavenworth disciplinary barracks. International human rights groups roundly condemned the conditions of her pre-trial confinement, which included prolonged periods of solitary confinement and poor mental health care. She attempted suicide twice during her time in prison. Her sentence was commuted by former President Barack Obama in one of his final acts in office.

Manning reached out to Lamo a year after WikiLeaks outed him as a financial donor to the anti-secrecy group in 2009. The pair exchanged instant messages, speaking first about Manning’s personal troubles in the military, where a military psychologist diagnosed her with gender dysphoria. She eventually confided in Lamo about her theft of classified files, including the now infamous video of an American helicopter attack in Baghdad that killed, among others, two stringers for the Reuters news agency.

Lamo justified his betrayal of Manning publicly by stating that he believed the leaks had put people in danger—though no investigation by the government or press has ever determined that any lives were at risk due to her disclosures. During one conversation, Lamo assured Manning that he could be trusted by claiming he was a journalist and a church minister, and that she would “enjoy a modicum of legal protection” for her “confession.” 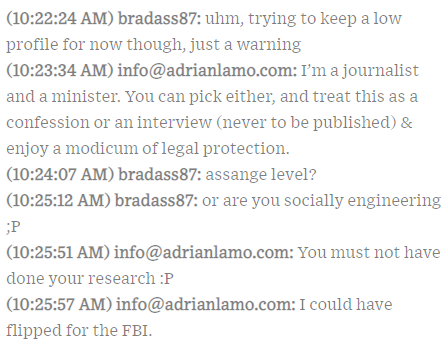 “For doing the right thing in revealing evidence of war crimes, Manning was sentenced to 35 years in prison, and is currently back in jail again for refusing to comply with a grand jury,” said Fassett, who also works as a reporter for the Freedom of the Press Foundation. “Perhaps there was always going to be risk in leaking, but it was Lamo that turned her over. It’s time to see the FBI’s documentation of what happened.”

While the FBI’s investigative files undoubtedly contain information related to Lamo’s 2003 arrest for hacking the Times, Microsoft, and Yahoo, among other targets, the bureau is also known to have amassed tens of thousands of pages of records about WikiLeaks and more than 8,000, at least, related to Manning.

In an unrelated request filed by journalist Emma Best, the FBI refused to turn over Manning’s files citing ongoing criminal proceedings. Manning had signed a Privacy Act waiver giving the bureau permission to release the files.

Manning is currently being held in a jail in Virginia for refusing to testify before a federal grand jury in the criminal investigation of WikiLeaks and its founder, Julian Assange, who as of Thursday faces espionage charges in the US.

A British court is set to consider the US government’s extradition request for Assange on 12 June. He is currently serving a 50-week sentence for fleeing to an Ecuadorian embassy in London while on bail in 2012. Swedish prosecutors are also attempting to extradite the Wikileaks founder as part of an inquiry into allegations of rape that first surfaced in 2010.

“I requested Lamo’s FBI file right after he died, and I think it’s of enormous interest value to national security journalists, researchers, and the general public,” Fassett told Gizmodo. “Those records are a part of understanding hacking history, and could shed light on historical leak investigations.”

Fassett is represented by the law firm Loevy & Loevy, which is notable for its work in helping journalists pry loose public records from recalcitrant US government agencies.