How Are Doves and Sparrows Ending Up Inside Baby Sharks?

Back in 2010, scientists were monitoring a shark population on the border between the US states of Mississippi and Alabama. They had hauled up a small tiger shark to tag when something strange happened: It puked up feathers. A DNA analysis revealed that the shark had eaten a brown thrasher, a speckled migratory songbird related to the mockingbird.

Further analysis revealed that this wasn’t just an isolated incident—a significant percentage of shark stomach contents revealed the remains of common backyard birds, and, surprisingly, only one species of waterbird. The study, published in the journal Ecology, demonstrates that food webs are more complex than you might think, and might even offer predictions about shark behaviour. 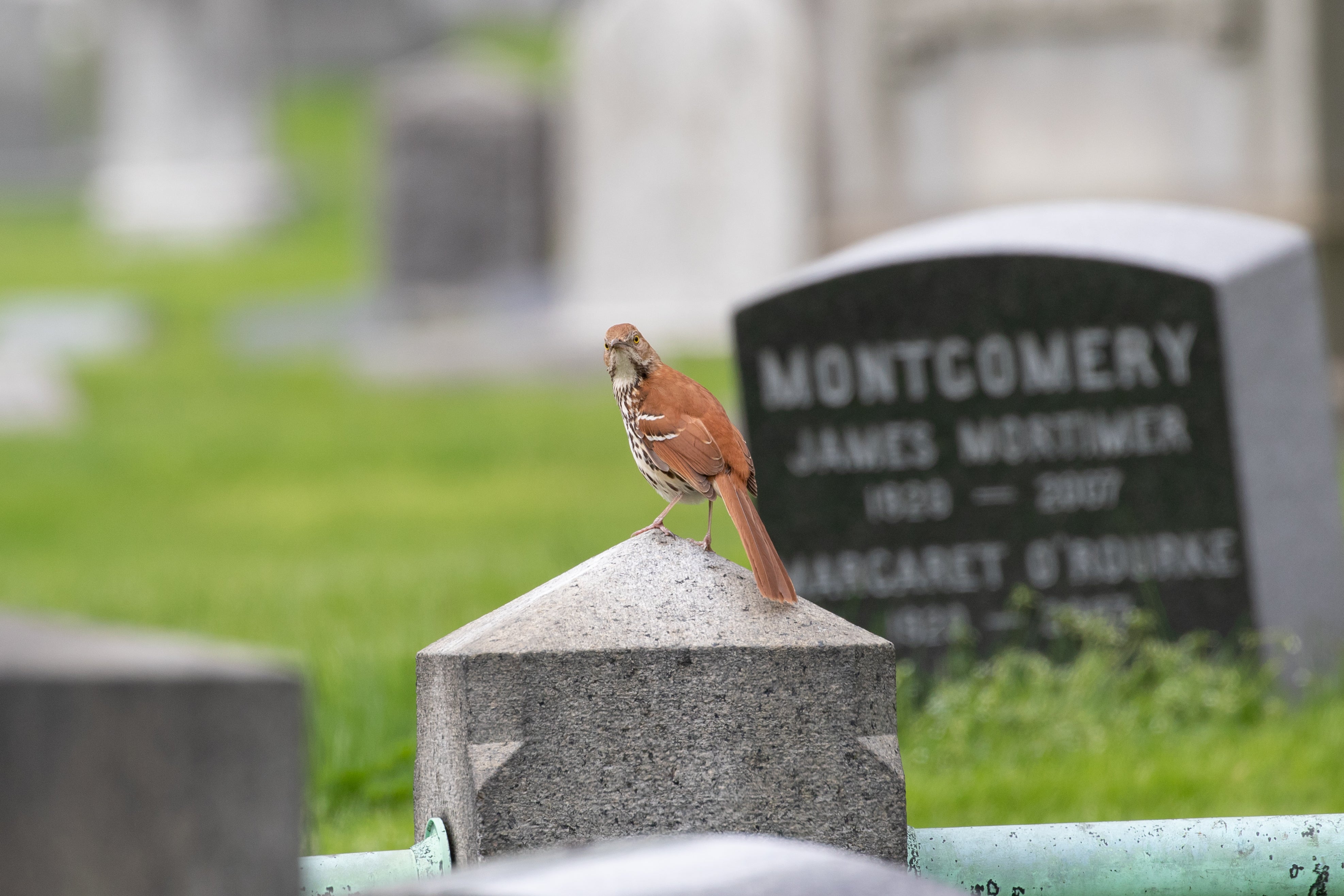 A brown thrasher at Green-Wood Cemetery in Brooklyn. Perhaps this bird’s own grave will be inside a shark stomach. (Photo: Ryan F. Mandelbaum)

Scientists analysed tiger shark stomach contents from 2010 to 2018, and found bird remains every year except for 2014, in 41 of the 105 sharks examined. Nineteen of those sharks were babies. There were 11 bird species represented: barn swallow, eastern kingbird, house wren, common yellowthroat, marsh wren, eastern meadowlark, swamp sparrow, brown thrasher, white-winged dove, yellow bellied sapsucker, and American coot. These are species that birdwatchers in the US look forward to seeing during the annual bird migration each spring and autumn.

You might wonder how the sharks ended up eating these land-dwelling birds, and why there weren’t any ocean birds—the researchers did, too. They looked up each of the species on eBird, the Cornell University-run community science database where birdwatchers log their sightings, to determine when the birds were expected to pass over the Gulf. The time when each bird’s remains were found coincided nearly perfectly with the peak of the bird’s autumn migration period in the cases of all but two species.

As to how the birds ended up in the ocean, that’s not clear. The scientists speculated that unexpected bad weather in the autumn might drive many migrants into the ocean, where they’re unable to swim and end up dying; past studies have documented evidence of these mass mortality events. That would explain why there weren’t many seabirds found in the shark remains—the eaten birds couldn’t get away from the wave, unlike seabirds, which are better able to navigate ocean conditions.

This isn’t the first time that bird remains have been found in shark bellies, study author Auriel Fournier from Mississippi State University tweeted. But what’s exciting about this study is that it tracked sharks over time, allowing researchers to connect the shark behaviour to bird behaviour. They noted that the fall bird migration happens around the same time as peaks in the number of baby tiger sharks, who are generally aren’t ready to hunt on their own. Foraging on the dead migratory birds might be an important substitute food source until they become capable predators.

Though this is just a specific instance of a surprising species interaction, it’s yet another example of the surprising connections between species on the Earth. I just wish I didn’t have to think about all of those dead birds.