Paleontologists have seen “frozen behaviours” in fossils before, including insects having sex, dinosaurs locked in mortal combat, and migrating trilobites lined up single-file. For fossils like this to emerge, however, a rapid burial is required. A new study published this week in Proceedings of the Royal Society B showcases a stunning new fossil in which one such rapid burial locked an entire school of fish, or a shoal, in place.

The limestone slab in which the impressions of these 259 fish were found was pulled from the Green River Formation in the western US. This sedimentary system dates back to the Eocene (56 million to 33.9 million years ago), spanning an area now occupied by the states of Colorado, Wyoming, and Utah. The fossil had made its way to the Fukui Prefectural Dinosaur Museum in Japan, where it caught the attention of Arizona State University behavioural ecologist Nobuaki Mizumoto in 2016, according to Science News. 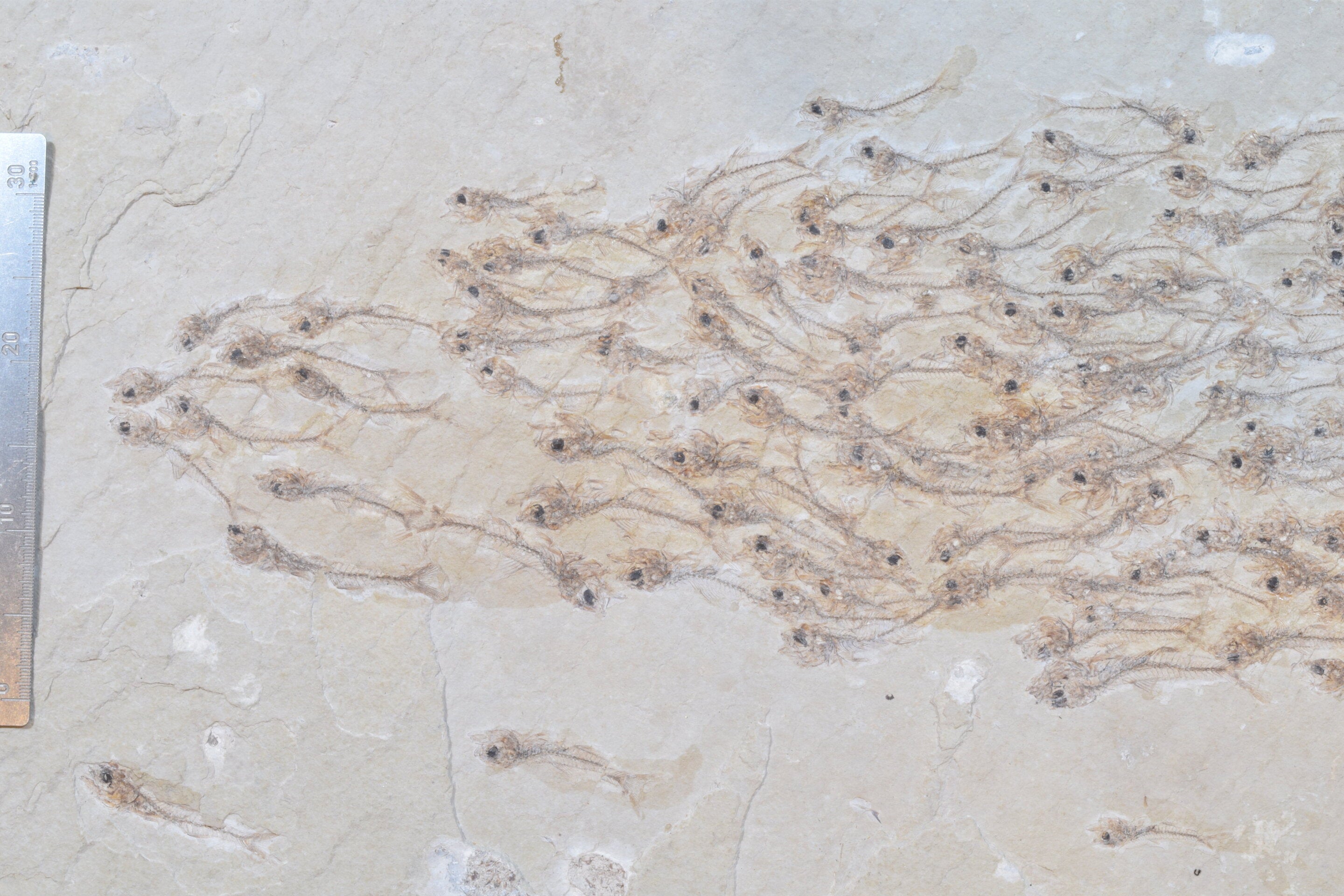 A close-up view of the fossil. (Image: Mizumoto et al./Proceedings of the Royal Society B)

Mizumoto, the lead author of the new study, embarked on an analysis to see if coordinated group behaviour could be inferred from the fossil. Such an analysis would provide new insights into the evolutionary origin of group dynamics and the ways in which ancient creatures interacted with one another.

The fossil contains the pristine impressions of 259 juvenile fish, all of whom belonged to the extinct species Erismatopterus levatus. To bring the frozen behaviour of these fish to life, the researchers carefully measured the position and direction of each individual, noting the distances to their closest neighbours. Like a photograph, however, the fossil could only provide a two-dimensional snapshot of the scene; shoals exist and move in three dimensions. Consequently, the researchers may have underestimated the distance between neighbours, as they point out in their study.

The team ran nearly 1,000 computer simulations to predict the likeliest next position of the shoal, accounting for factors like variations in water flow, spatial distribution, and so on.

“We inferred the position of each fish if it moved a very short distance in its heading direction from its preserved position,” the authors wrote in the study. “Each fish was then classified by whether it was now closer to its nearest neighbour (attraction) or further from it (repulsion).” 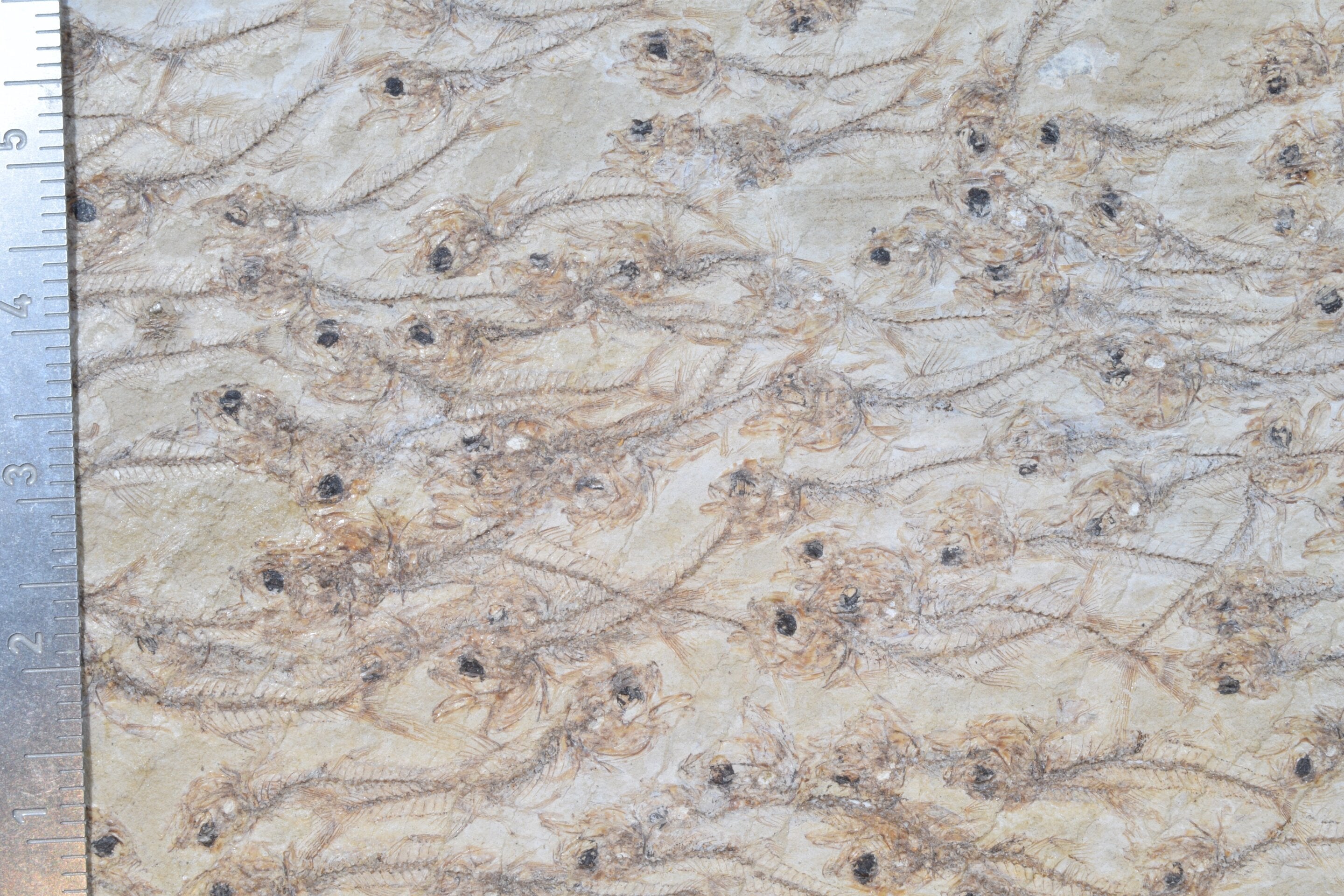 A detailed view of the fossilised fish. (Image: Mizumoto et al./Proceedings of the Royal Society B)

The models showed that the fish were indeed moving in unison. What’s more, the researchers were even able to discern the rules surrounding their social interactions; the fish moved away from individuals that got too close and swam towards neighbours that were getting too far away. The same rules can be found in fish living today, the researchers noted. The finding shows that this group dynamic has been in place since at least the Eocene.

The question as to how this scene managed to become locked in time “remains unclear,” in the words of the researchers. Obviously, whatever happened to these fish happened very quickly. A possibility presented in the new study is that a sand dune collapsed onto the shoal in shallow waters—a process that could have locked the fish into place within seconds. Sudden freezing was ruled out on account of the warm temperatures of the Green River Formation at the time.

That said, the new study “highlights the possibility of exploring the social communication of extinct animals, which has been thought to leave no fossil record,” concluded the authors.

Featured image: Mizumoto et al./Proceedings of the Royal Society B