This past January, astronomers managed to capture the moment a space rock struck the Moon during a total lunar eclipse. Now we’re learning more about this unprecedented event, including the speed of the offending object and the intense temperatures reached during the impact.

Our Moon gets struck by bits of debris left over from the formation of the Solar System on a regular basis. But our natural satellite has no atmosphere to speak of, so celestial objects of various sizes are unimpeded, smashing into the lunar surface at tremendous speeds. Astronomers have managed to capture the odd lunar impact over the years, but the one captured during the total lunar eclipse of 21 January 2019 represented a first for science.

New research published late last week in the Monthly Notices of the Royal Astronomical Society is shedding new light on this unique event, including updated estimates of the speed and size of the meteoroid, the amount of energy expelled during the impact, and the size of the new lunar crater.

For the lead authors of the new study, José Madiedo of the University of Huelva and José Ortiz of the Institute of Astrophysics of Andalusia, the event was a culmination of years of preparation, not to mention years of tremendous patience. Madiedo and Ortiz are involved with the Moon Impacts Detection and Analysis System (MIDAS), which uses a series of telescopes and software to detect the moment a meteoroid hits darkened portions of the lunar surface. MIDAS telescopes are equipped with high-sensitivity video cameras (the system can detect flashes as brief as 0.001 seconds), along with photometric filters used to determine the temperatures produced by the impacts.

MIDAS has managed to capture numerous lunar impacts since the system went into operation in the late 1990s, but the flash captured during the total lunar eclipse this past January—those precious and fleeting moments when the Earth casts a shadow across the entire face of the Moon—was a first for the project. 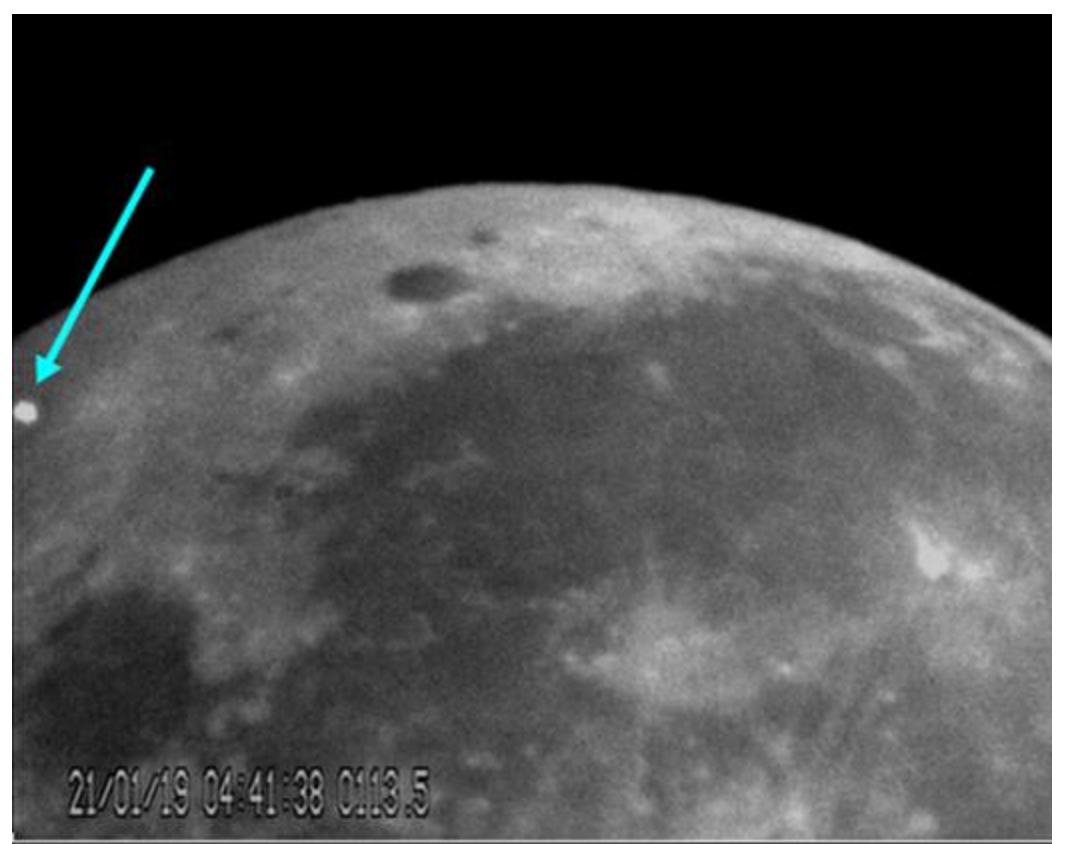 “This is the first time ever that an impact flash is unambiguously recorded during a lunar eclipse and discussed in the scientific literature, and the first time that lunar impact flash observations in more than two wavelengths are reported,” wrote the authors in the new study. As noted, the MIDAS telescopes captured the event at multiple wavelengths of light, or different colours of light, producing a high-fidelity view of the impact.

As an added benefit, telescopes from around the world were trained on the Moon during this exact moment, providing a slew of data which were used in the new analysis.

The impact produced a flash that lasted for a very brief 0.28 seconds, and it got as bright as a magnitude 4.2 star, which means it was visible to the naked eye. The space rock struck the Moon near the Lagrange H crater, which is near the southwestern limb, or visible edge, of the Moon.

The meteoroid weighed about 45 kilograms, which is just shy of 100 pounds, and it measured somewhere between 30 to 60 centimetres across (11.8 to 23.6 inches). Previously, the researchers had estimated the object at around 10 kg (22 pounds), so it was heavier than initially presumed.

When the meteoroid struck the Moon, it was travelling at 61,000 km/hr (37,900 mph). The energy released by the impact was equivalent to 1.5 tonnes of detonated TNT. The debris that spewed out as a result of the collision reached temperature of 5,400 degrees Celsius—a temperature comparable to the surface of the Sun. The resulting crater now measures 15 metres (50 feet) across.

“It would be impossible to reproduce these high-speed collisions in a lab on Earth,” said Madiedo in a press release. “Observing flashes is a great way to test our ideas on exactly what happens when a meteorite collides with the Moon.”

Though fascinating, these findings have a practical aspect as well. In addition to learning more about the Moon-Earth environment, scientists can use this information to assess the safety of the lunar surface for future explorers and habitats.