We’re still in the early days of 5G, but if you take a quick look around the smartphone world, it’s clear Qualcomm has gotten a head start when compared to other chipmakers. Nearly every 5G phone on the market today is powered by a Qualcomm modem, and while Qualcomm recently got slapped for violating antitrust laws in the US, with its next high-end mobile chip MediaTek could finally deliver some well-needed competition in the 5G space.

While the chip itself doesn’t have an official name yet, MediaTek claims that its upcoming SoC (system-on-a-chip, AKA processor) is the “world’s first fully-integrated 7 nanometre 5G SoC” and with it, the company hopes to bring down the price of future 5G smartphones and mobile devices. That’s an enticing idea, because anyone who has taken a look at the starting price of phones, like the £1,100 Galaxy S10 5G, knows it’s hard to ignore the hefty premium that comes with today’s 5G-ready handsets.

On top of that, MediaTek’s 5G SoC will also be the first chip to feature ARM’s recently announced Cortex-A77 CPU and Mali-G77 GPU. The Cortex -A77 is a follow up to ARM’s A76 CPU and features improved efficiency in addition to a newly redesigned architecture, and if past releases are any indication, this may be the same CPU core we see in Qualcomm’s next flagship chip later this year. Elsewhere, MediaTek’s 5G SoC will also come with support for camera sensors with up to 80-MP resolutions and speedier AI processing thanks to the chip’s third-gen APU. 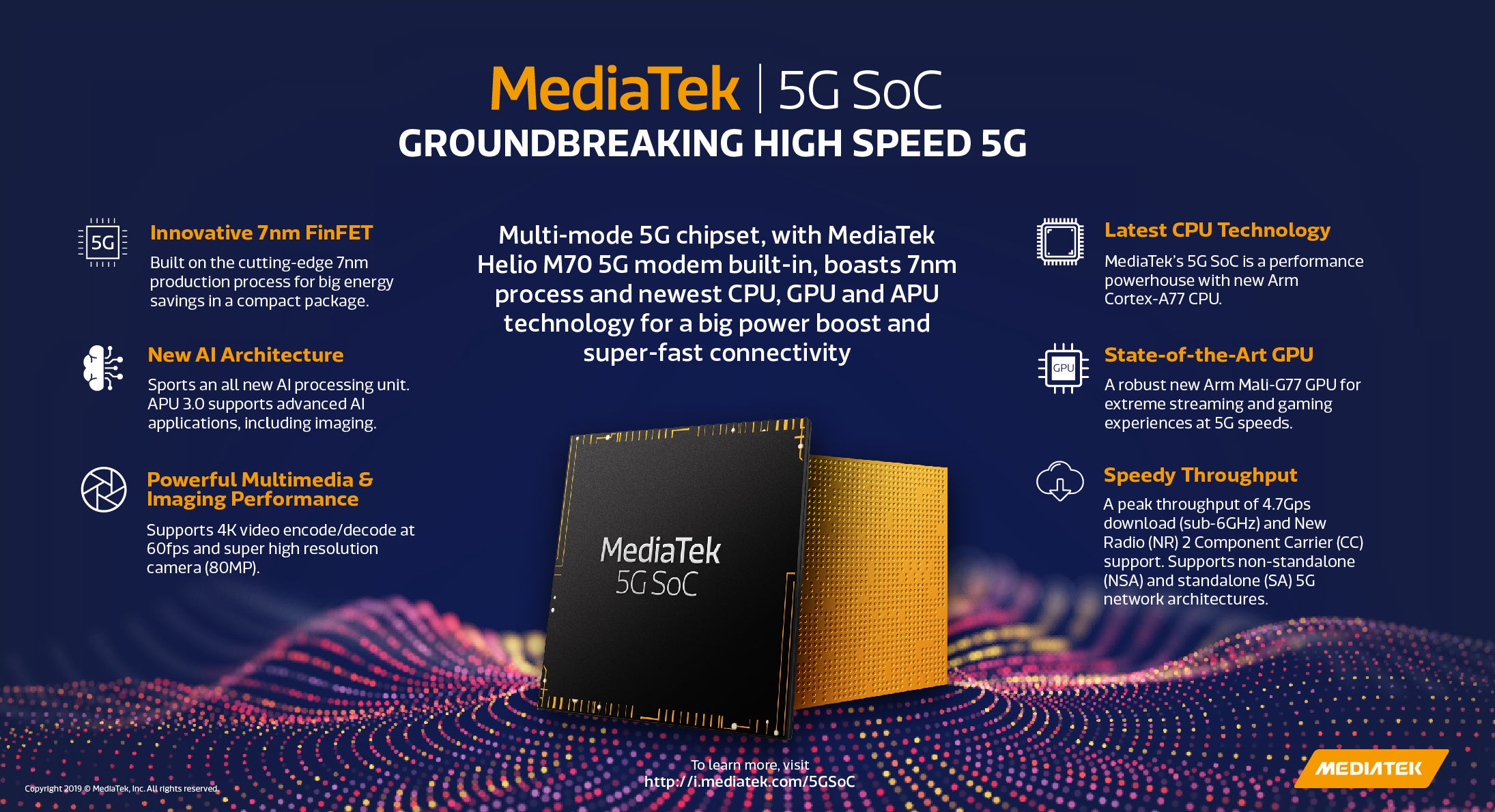 It remains to be seen how MediaTek’s 5G SoC will perform in real life, but at least on paper, its features and specs look solid. (Photo: MediaTek)

And when it comes to 5G performance, MediaTek boasts that its chip can hit sustained download speeds of 4.2 Gbps and uploads speeds of up to 2.5 Gbps. However, there is an important caveat regarding MediaTek’s chip, as its integrated modem only supports 5G on the sub-6GHz and 2.5-GHz bands.

With only a handful of chipmakers worldwide having the ability to even make 5G-ready chips and SoCs, it's nice to know that there might be at least one alternative to all those Qualcomm-powered 5G phones coming soon. That said, soon is somewhat relative, as even MediaTek doesn’t expect any consumer-ready devices featuring its new 5G SoC to be available until Q1 2020.