Anything can happen during a live event. Or not happen. As it just so happens, Microsoft Build 2019 opened up with a whole lot of nothing thanks to a botched HoloLens 2 demo.

To kick things off, John Knoll, the chief creative officer at Industrial Light and Magic, and Andy Chaikin, a space historian and author, took the stage wearing HoloLens 2 headsets. They rattled off some prepared lines about showing us the power of the Unreal Engine and HoloLens 2 to recreate the Apollo 11 moon landing. What followed was a fancy galactic background, some cosmic space whale music, some camera panning, and a sheepish admission from Chaikan that “doing a live demo is harder than landing on the moon.”

Cue some awkward laughs from the audience, followed by Knoll and Chaikan engaging in some “whoopsie daisy that didn’t work!” banter before both promptly exited stage right. 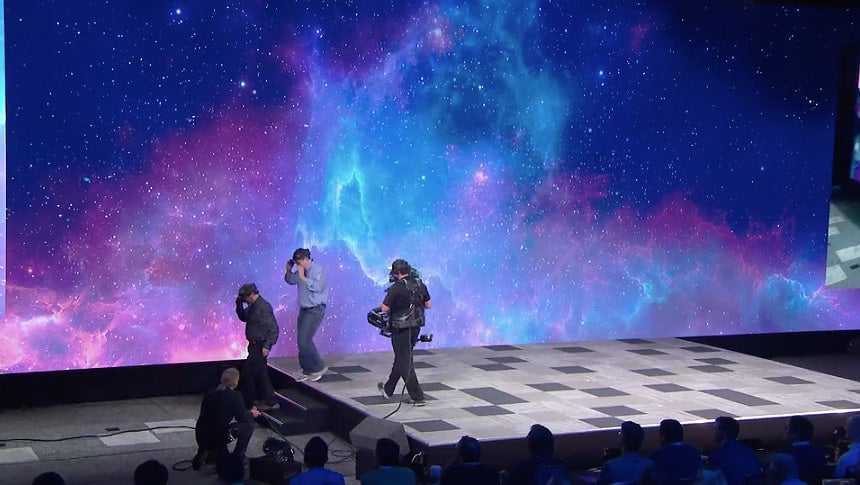 Knoll and Chaikin noped out of there ASAP. (Screenshot: Andrew Liszewski/Gizmodo)

The goof had some strong Michael Bay energy from that one time he failed to read the teleprompter during a Samsung CES event. It’s also not the first time a live demo has backfired for Microsoft. Back in the day, a demo of Windows 98 crashed on live TV as a silently mortified Bill Gates did his best impression of the thinking face emoji.

All in all, it was a bizarre start to Build 2019. Let’s just hope it’s not the most memorable thing.