Mac users who are tired of Chrome, Firefox, and Safari just got a new (if not totally official) way to browse the web. Monday evening, a Twitter user named h0x0d posted download links for developer builds of the macOS version of Microsoft’s Edge browser, The Verge reports.

The links are still live, so you can download Edge onto your Mac rather easily. The browser defaults to a white user interface, but navigating to edge://flags and enabling Microsoft Edge Themes will turn on a dark mode significantly more attractive than Chrome’s (but still not quite as native looking as Safari).

The Edge store for extensions is also available, with a handful of regularly used extensions like LastPass and Grammarly appearing as options to install. And just like the Chromium-based Edge beta currently available on Windows 10, you can download Chrome-based extensions and sideload them into Edge.

The context and option menus in Edge for Mac share the Fluent UI look found on Windows 10. They’re so good-looking you may find yourself a little annoyed when you hop into any other app and get the macOS context menus.

As for speed, the weekly developer build of Edge I tested scored around the same as Chrome for Mac in the WebXPRT 3 benchmark. That isn’t too surprising given that both Edge and Chrome are based on Chromium.

However, one does hope that the final version of Edge will speed things up. In my conversation yesterday with Joe Belfiore, VP of Windows and Devices (and the de facto head for all things Edge), he said that the browser wouldn’t give up any of its speed as it moves to Chromium. As Edge is currently one of the faster (if not fastest) browsers for Windows 10, this was an encouraging, if pretty surprising claim. Surprising because Chromium’s tab management system is a noted memory hog that can grind a browser, and even an entire computer, to a halt if left unchecked.

In my quick test, Edge seemed to share Chrome’s bad habit of chewing on memory, though it wasn’t quite as severe a hog. 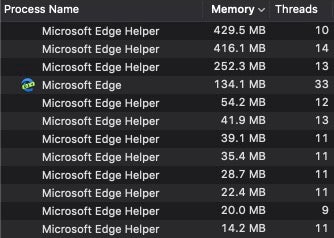 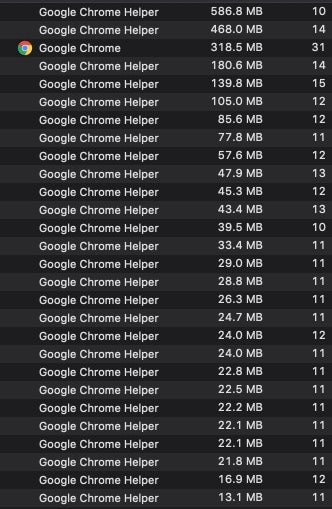 But it still isn’t as bad as Chrome.

Here’s hoping that’s something Microsoft improves on before an official beta of Edge launches for macOS. While Belfiore wouldn’t share specifics, he insisted Microsoft had no plans to release a browser that’s slower than what Microsoft had before – a difficult task for the Windows 10 version, but an easy one for macOS, where Microsoft hasn’t had a browser presence in a decade.

If you want to try out the leaked versions of Edge, you can get the more stable weekly Dev build here, or try the less stable daily Canary build found here. But note that these are not official and you use them at your own risk. For most people, it’s probably better to wait until the official release, which could be any day now.